I had a wonderful trip to Kentucky a few weeks ago and a highlight for me was getting to visit four radio stations. I traveled to Louisville in order to attend the International Association for the Study of Popular Music (IASPM) conference and to see some friends. Lucky for me, two of those friends have close ties to radio stations. After donning my cold weather gear, my first stop was to University of Kentucky’s college radio station WRFL-FM. 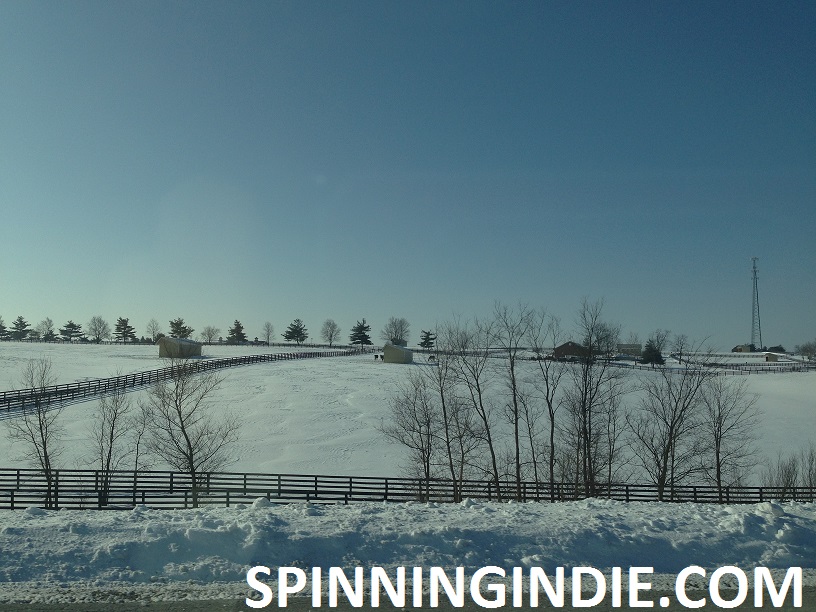 I arrived in Louisville on an unseasonably cold February 18th and the next day Sharon Scott and I took a road trip to the Lexington area. Scott, who is the General Manager of community radio station Art x FM, has been a friend of mine for a few years. We initially connected when she was working to fight the shut down of the Vanderbilt college radio station WRVU in 2011 and met in person later that year at a conference. I stayed with Scott in Louisville and she was eager to visit some more radio stations with me (we visited WFMU together in 2011 and also toured some radio stations in the Urbana-Champaign area of Illinois during a Grassroots Radio Conference back in 2012). 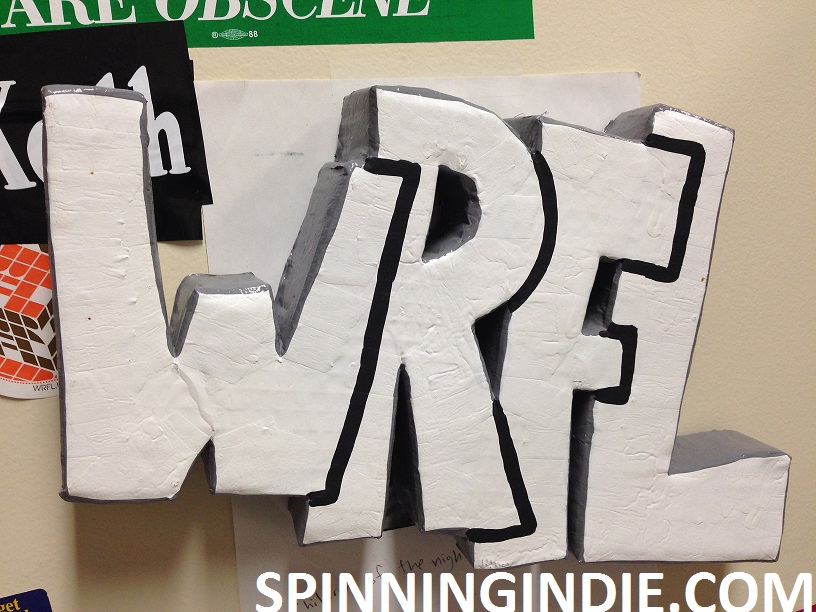 A major snowstorm had just hit the region and record cold temperatures (apparently blowing in from Siberia), brought temperatures down to 8 degrees below zero on the day of our road trip to Lexington (Thursday, February 19th). For the 4th day in a row, school had been cancelled for Scott’s elementary school-aged son Max, so he opted to join us on our journey. 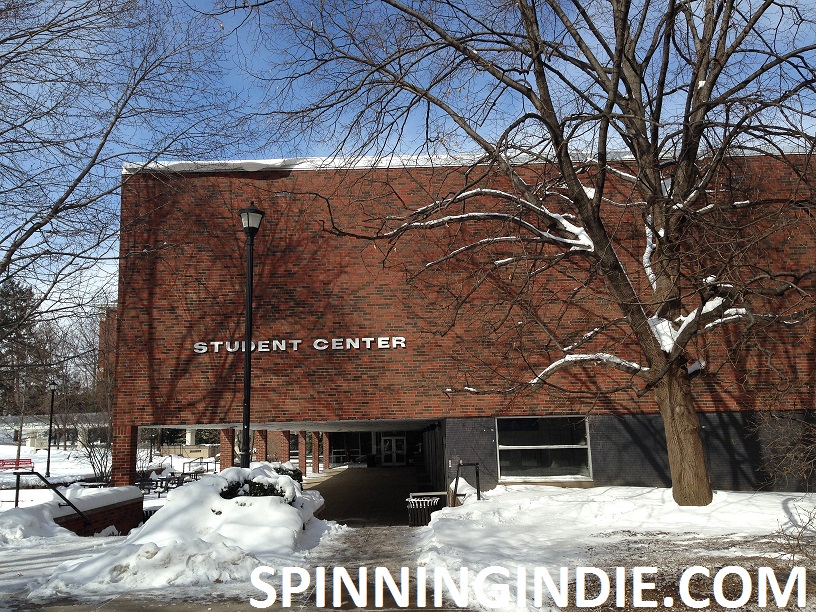 Although smaller, local roads were still snowy and hard to navigate, the major highways that we took to Lexington were clear. It was a beautiful drive past rolling hills covered with untouched snow. When we arrived at University of Kentucky, the campus was pretty quiet and the parking lots were nearly empty. After making our way to the station we learned that school had been closed all week due to the weather. Despite the snow days, WRFL stayed on the air throughout the campus closure, with live DJs 24/7, just like any other day of the year. 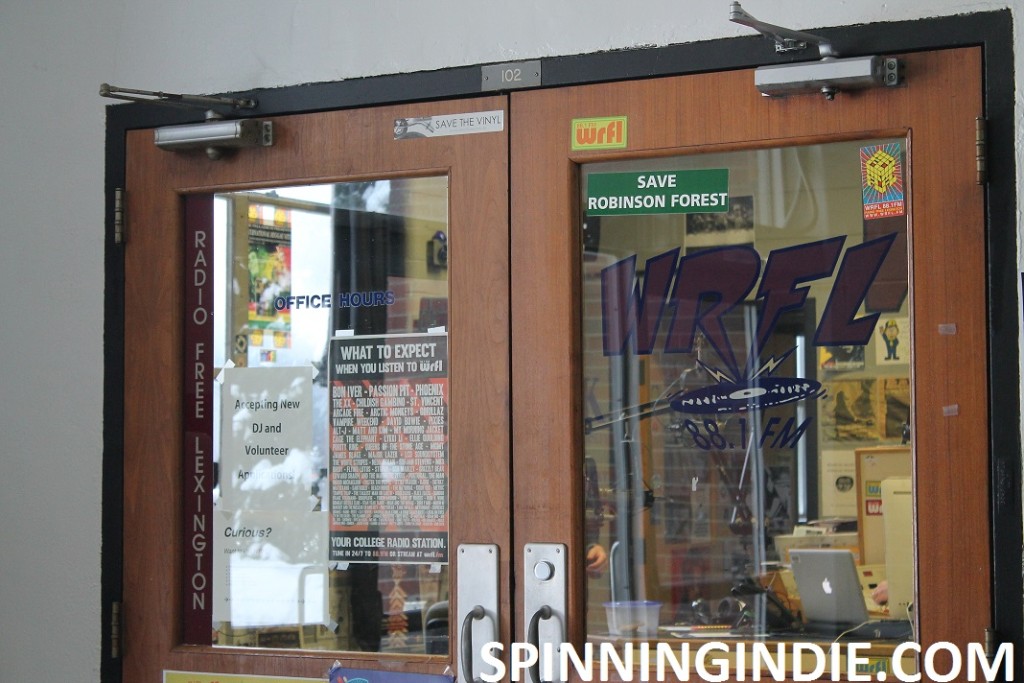 After entering the University of Kentucky Student Center, we spotted the WRFL studio from the hallway. The on-air DJ let us in and we were soon greeted by General Manager Ben Southworth. A first year senior, Southworth has been at WRFL since 2012. After taking a quick look at the studio, we wandered back into the record library to chat so that we weren’t disturbing the DJ. 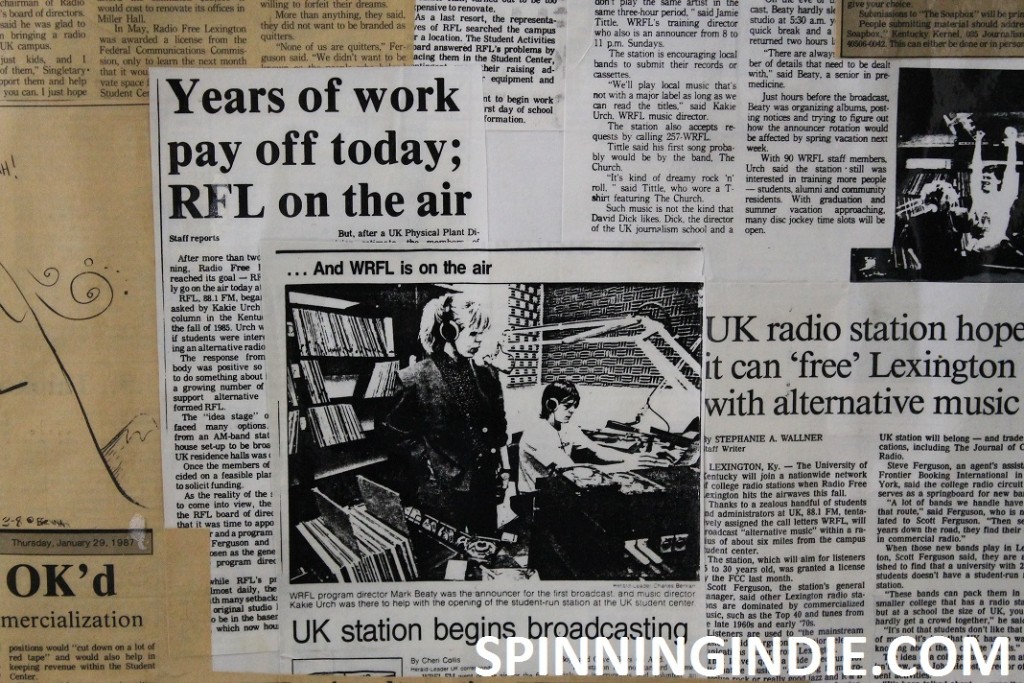 I’ve long been a fan of WRFL and profiled the station in 2009 for my Spinning Indie 50 State Tour series. The goal of that series was to highlight college radio stations in each of the 50 states and I started out by focusing on places that I was less likely to visit in person. Because of that, this is the first of my field trips that features a 50 State Tour station. As I mentioned in my 2009 piece, WRFL was launched by students in 1988. There is an amazing documentary about the station’s origins that I link to in that piece. It’s worth a viewing, as it captures the enthusiasm of the station’s founders. 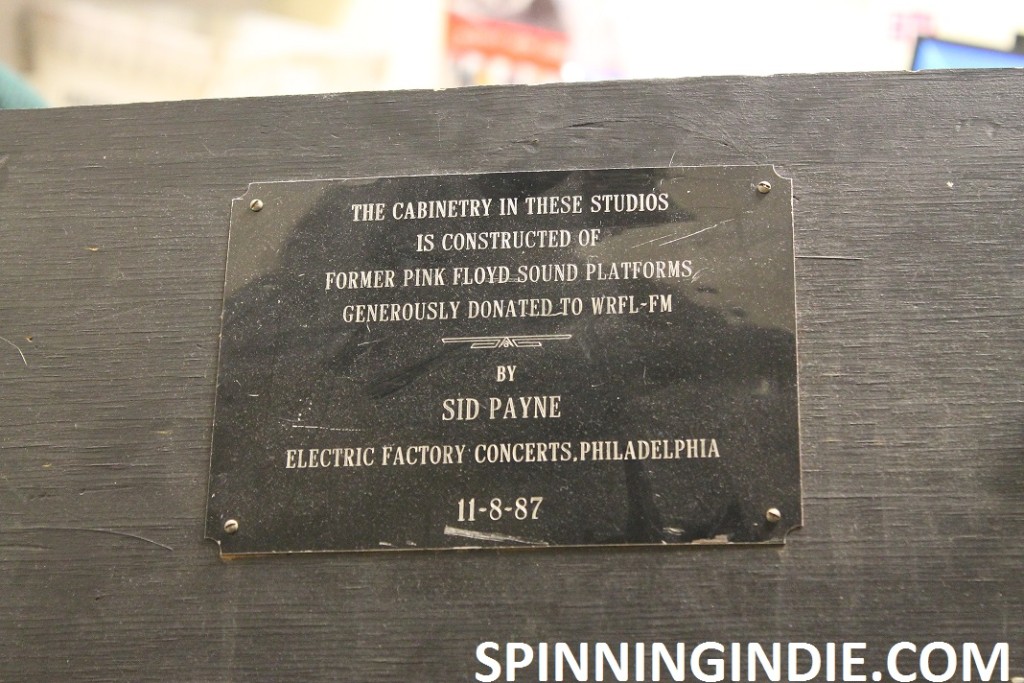 I was glad to visit WRFL when I did, as the station is starting to pack up in preparation for a move this spring. The WRFL space will soon be renovated, so while that takes place, the station will be housed in the bulk mail sorting room of the old post office for 3 years. After the renovations are done, WRFL is expected to move back to its longtime space. 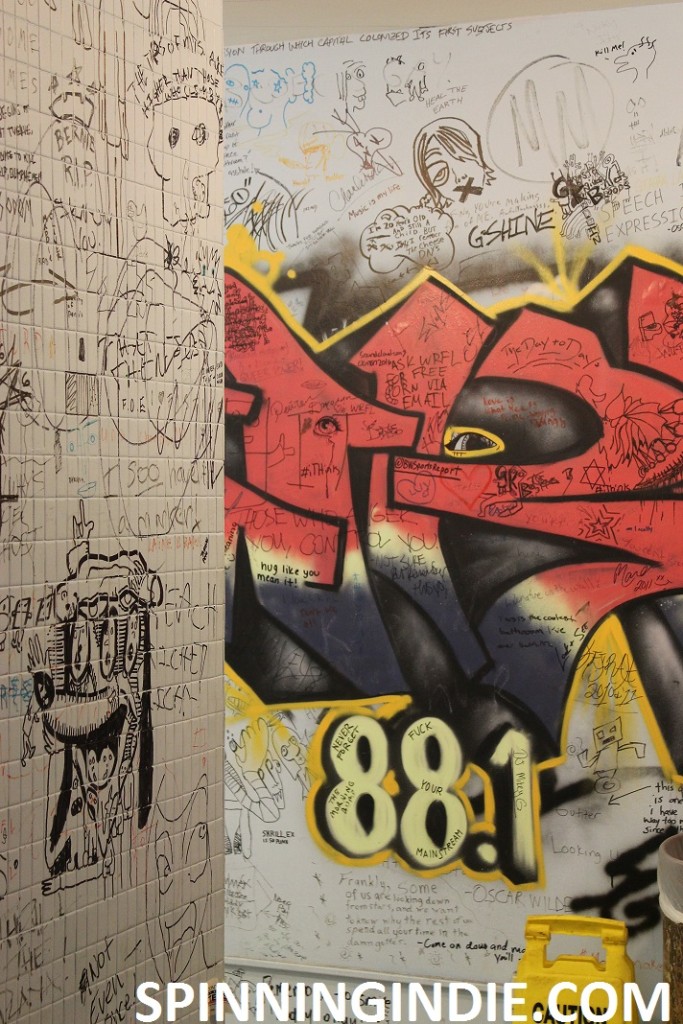 Southworth told us that they are already starting to take down posters in order to archive them before the move. Mail tubs full of CDs also looked like they were getting organized and staged in advance of the move. As we looked around the lobby-like record library (it’s got a couch, opens up to a bathroom, and is also adjacent to a hallway that leads to offices), it was easy to spot decades worth of history on the walls. Vintage stickers were plastered on the bathroom door, a display of WRFL press was posted above the couch, and the bathroom walls were covered with graffiti and artwork from DJs, musicians, and guests. As I mentioned last week, we also saw an old sticker emblazoned with Art x FM’s soon-to-be call letters WXOX. Mystified, we dug further and found out that it was a promotional sticker from a 1990 film (A Matter of Degrees) about a fictional college radio station. 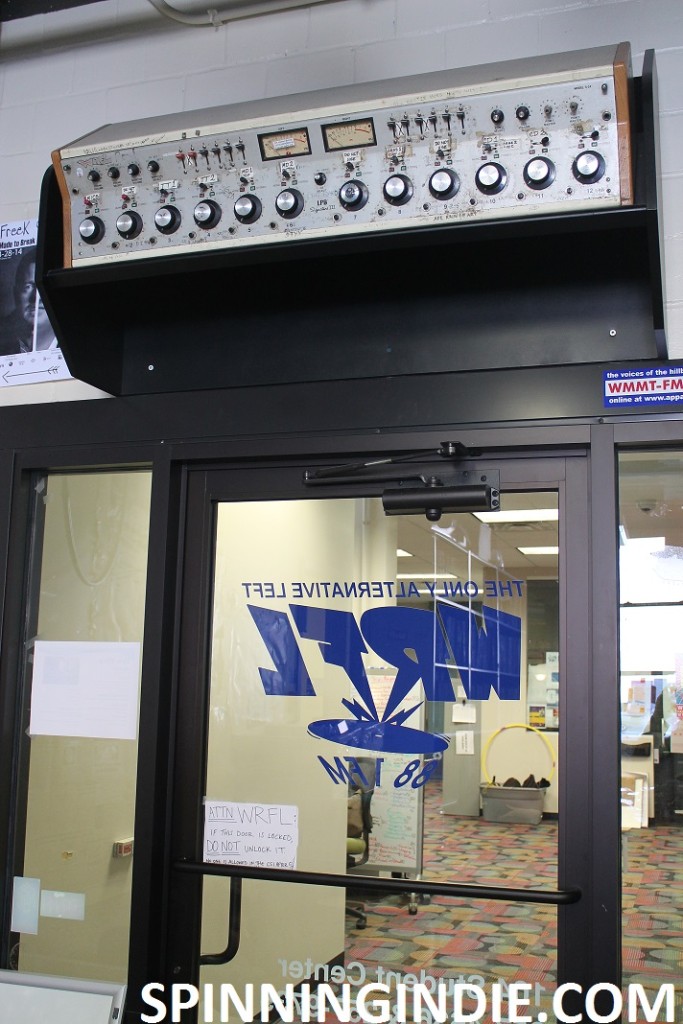 I asked about the task of archiving all of the materials at WRFL and Southworth said that they’ve been taking photos and have also worked with the school’s archivist to ensure that certain materials (like copies of the long-time WRFL ‘zine RiFLe) are preserved. As they’ve been cleaning up the station, they’ve also uncovered some historic gems, including pictures from the 1980s. They also pointed out an old wooden ammunition crate full of carts under a table in the record library, as well as an old board affixed to the wall above the entrance to record library. Not surprisingly, in one of the offices I saw the ubiquitous Leo Blais sign featuring the call letters WRFL.

As we chatted with Southworth, Ben Allen, University of Kentucky’s Media Adviser, arrived at the station. Allen has been involved with the station since he was an undergraduate, telling me that he started hanging out at the station in 1999 and would do his homework on the couch. He then officially joined the station and eventually became WRFL’s student General Manager in 2002. 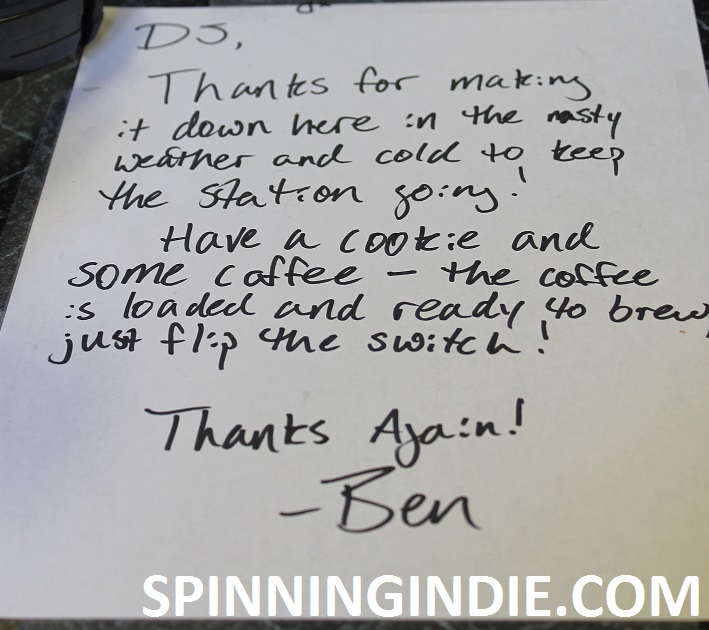 Thank you note to DJs for braving the weather. Photo: J. Waits

The weather was a big topic of conversation, as much of campus life had been on hold all week. Allen told us that he hadn’t left his house since Sunday. Both Bens said that typically there are more station directors hanging around WRFL (there are 16 directors total, plus the GM), but because of the campus closure, the station was unusually empty. They also talked about how great it was that the station managed to stay on the air with live DJs throughout the bad weather. WRFL does not have any sort of automation system and it prides itself on the fact that there are live DJs on the air 24 hours a day every day of the year. 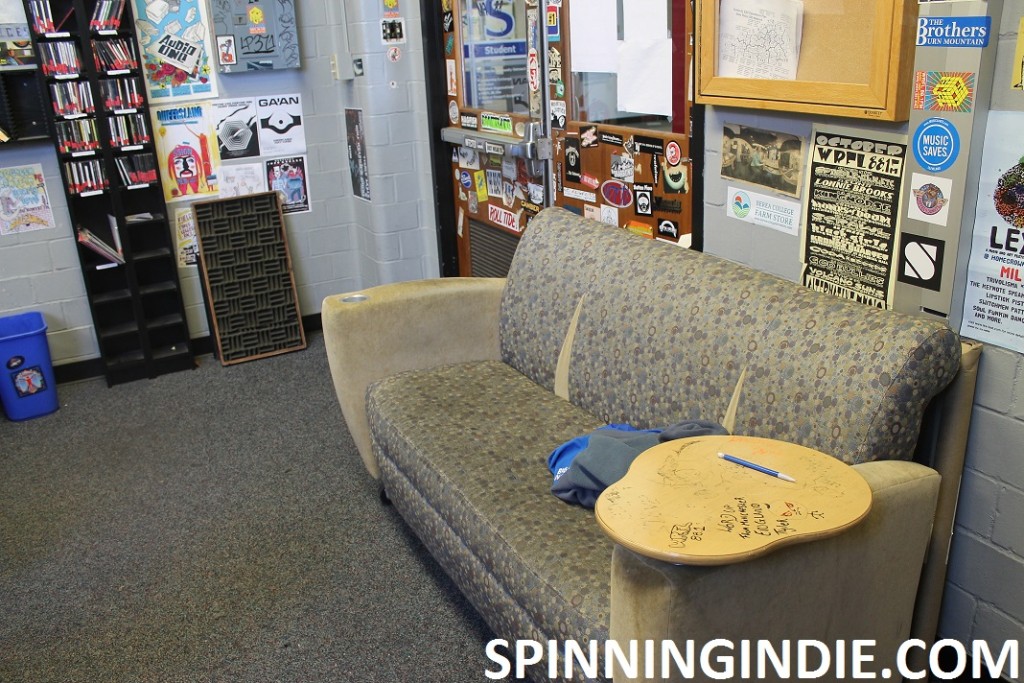 Couch near the entrance to the WRFL studio. Photo: J. Waits

Even though the snow made it impossible for some DJs to make it to the station, WRFL is lucky in that the Program Director, General Manager, and some of the station staff and DJs live close by, including in nearby dorms. We were told that one DJ even slept at the station in order to be on the premises in order to help ensure that WRFL stayed on the air. Additionally, Southworth and Allen said that DJs have generally been quick to offer to fill in on open shifts during the week of bad weather. They mentioned that a DJ listserv has been really effective as far as finding volunteers to sub for other DJs. 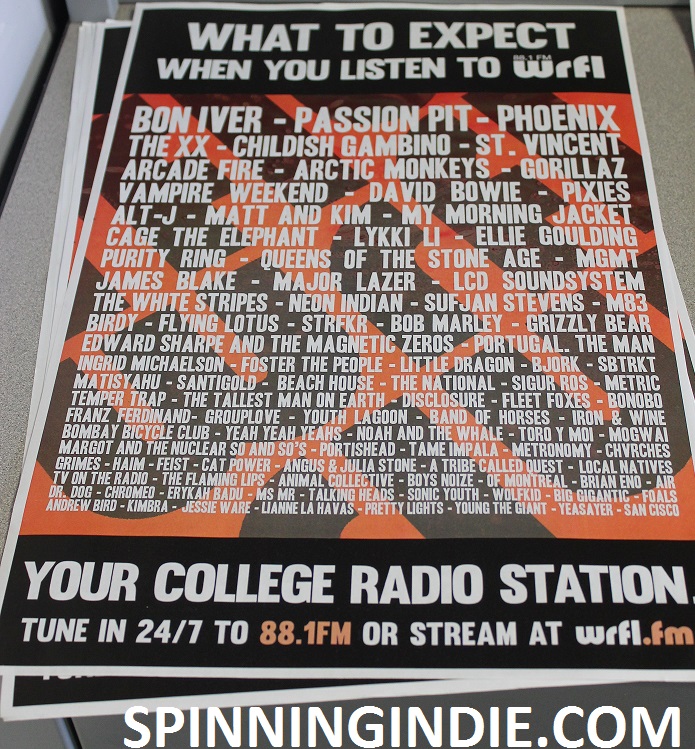 Allen said that WRFL serves an interesting purpose at University of Kentucky since it’s quite a departure from many of the other student organizations. On a campus dominated by Greek life, athletics, and religious organizations, the underground radio station is a home to students who may be looking for something a little different. Although the station is made up of mostly students this semester, there are also quite a few DJs from the community. In recent years the percentage of students has increased, with the highest number typically in the spring semester. I was told that last fall the station was probably 50% students and 50% community members. 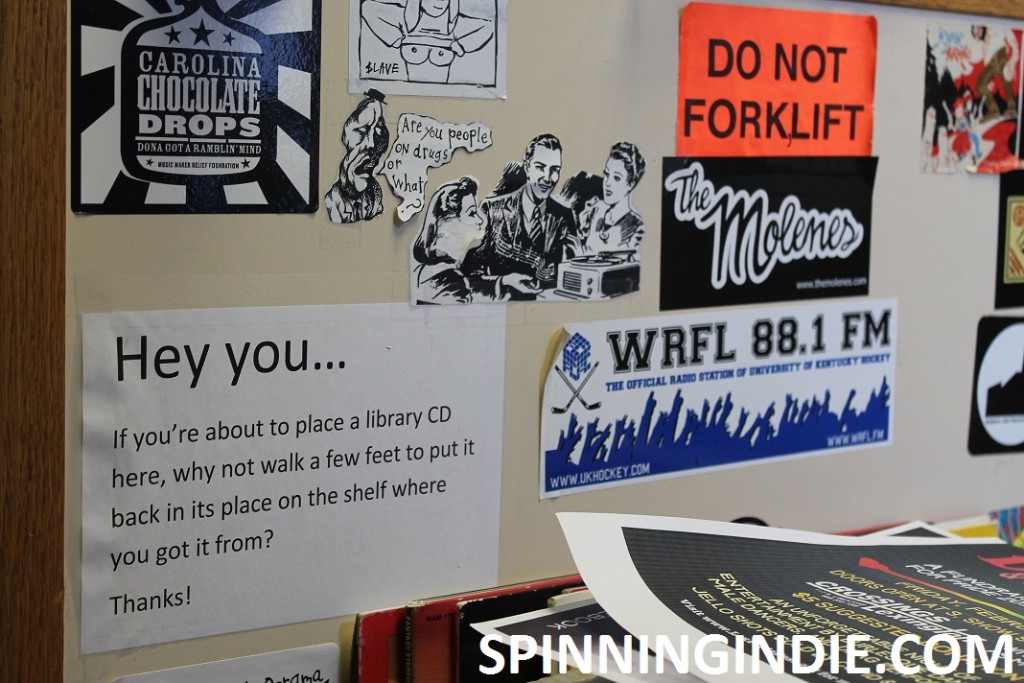 As far as music, WRFL mostly gets sent digital releases, although most DJs play CDs. The station doesn’t get sent much vinyl, but does get some cassettes, mostly from Louisville. Probably in light of that, WRFL just installed a new cassette player in the on-air studio. There are some DJs who play vinyl, with one old school hip hop show playing all vinyl. A handful of DJs play mostly vinyl and towards the end of our visit we saw Allen cueing up a record during his show. 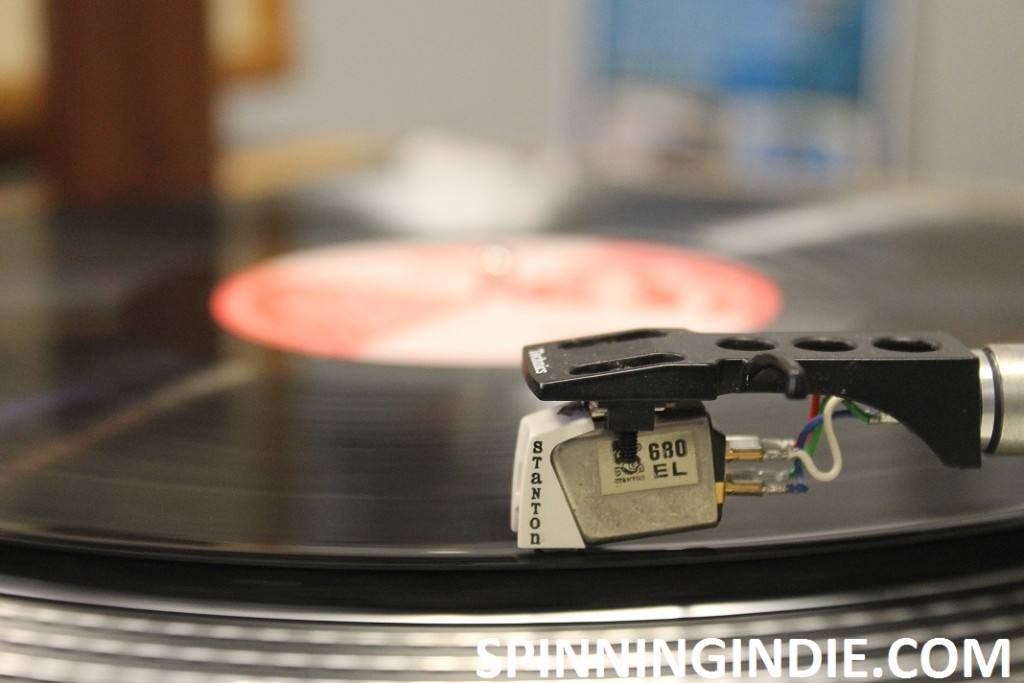 The record library is full of LPs, CDs, and 7″s and WRFL is in the process of cataloging its 7″ library, which is mostly material from 1989 to 2001. As we navigated our way through the record library we also saw wine boxes on the shelves and were told that those were full of jazz CDs. 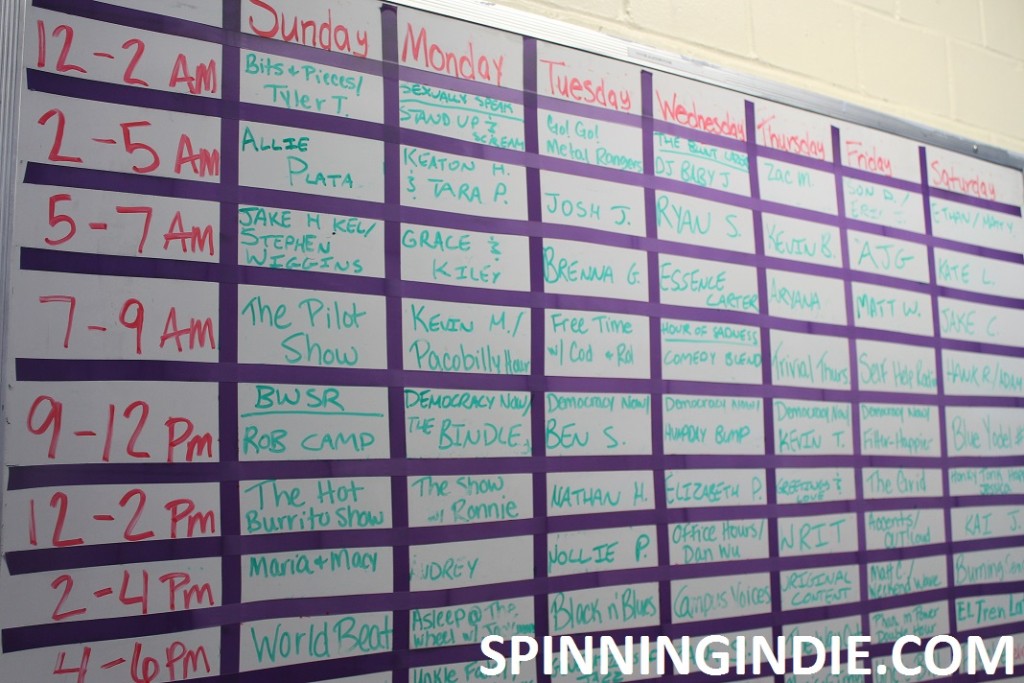 I was amused to learn that training at WRFL is called “Disorientation.” It’s comprised of four sessions that cover WRFL culture and policy, FCC regulations, and programming. Prospective DJs also observe a DJ for 4 weeks, take a 100 question written exam, and then do a 60-minute on-air exam. If they satisfy all of those requirements, then DJs are cleared to go on-air. Some of the newer DJs are more likely to get assigned to late night and early morning shifts (12-2 AM, 2-5AM, 5-7AM). There’s also an open shift on Sunday mornings from 7am to 9am that serves as a bit of a training ground for new DJs. There’s a high demand for shows and Southworth pointed out that when he trained a few years ago there were only 8 people in his class. In the past year, classes have had around 35 trainees. 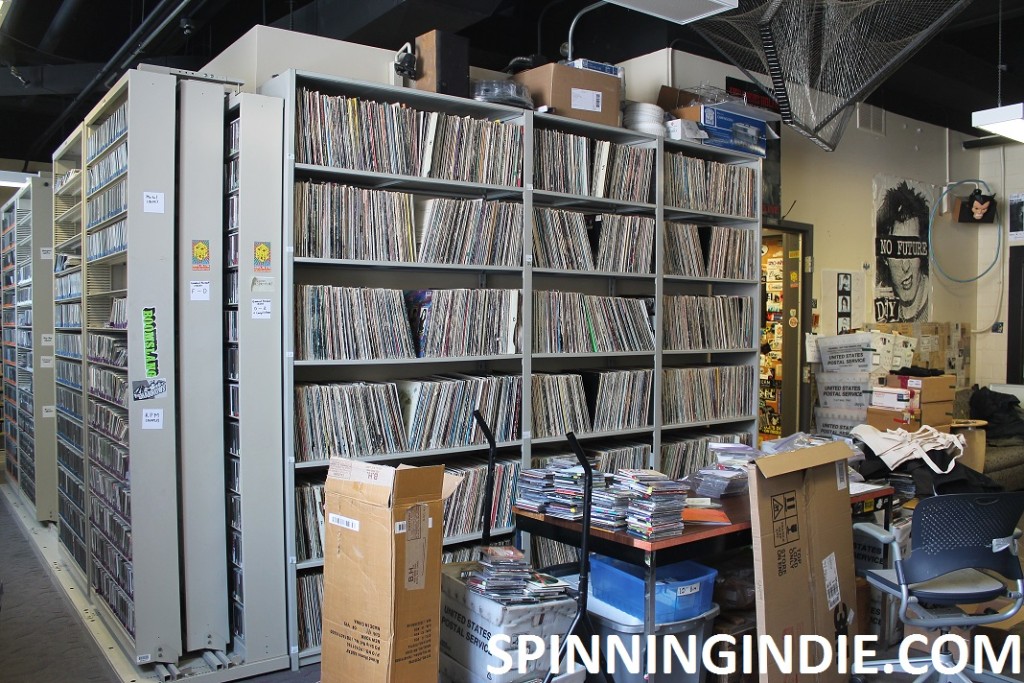 WRFL’s record library. Hall to the right of the records leads to offices and production room (Photo: J. Waits)

When live bands come to WRFL, they play in the on-air room and a snake is run into a production room, which is behind the record library. WRFL Live, which features live performances, runs every Wednesday night. 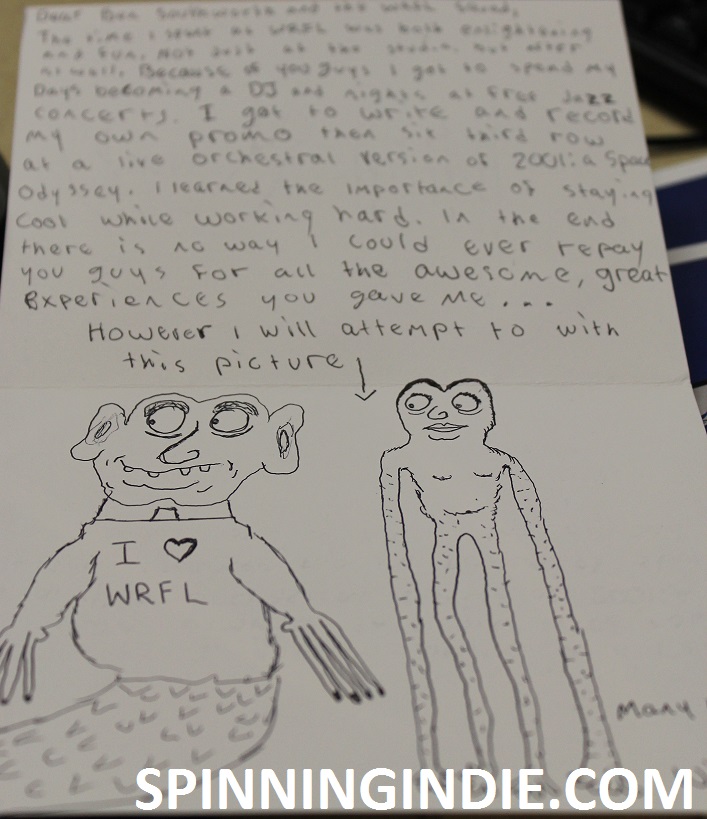 I was also interested to hear that some high school students had recently gone through training at WRFL. For a month, students came in, went through the official training program, learned about production and helped with a myriad of station tasks. In general, WRFL has worked to build connections with the broader community, both on and off-campus. I was told that the mayor was on the air by phone on the morning of my visit, talking about emergency preparedness. Additionally, a journalism class does the morning news at WRFL. The narrow news room, which also has an AP wire, is located just behind the on-air studio. Southworth said, “It’s important to be relevant to the campus and community.” 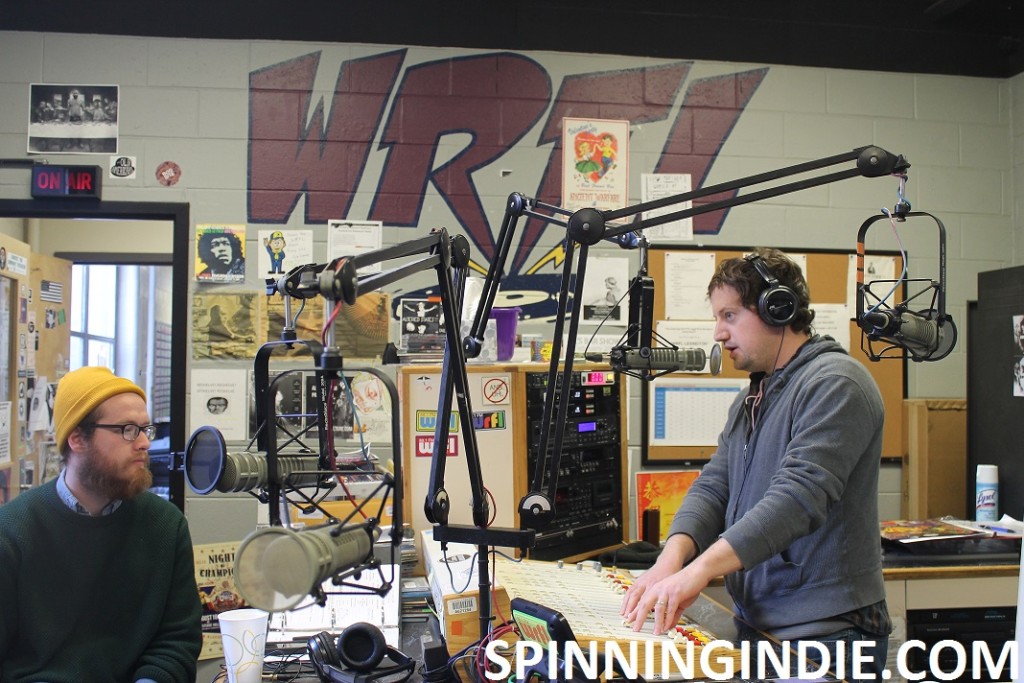 Ben Allen on the air at WRFL, as Ben Southworth looks on. Photo: J. Waits

As we wrapped up our visit, Allen prepared for his show and selected some dance hall records. We once again bundled up in our coats, gloves, and hats, and headed off to see yet another college radio station. Thanks so much to Southworth and Allen for a wonderful visit to WRFL and to Scott and her son Max for making the journey with me. In future posts I will write about my other station visits in Kentucky. This is my 77th radio station field trip report. See my most recent field trips on Radio Survivor and see all of my station field trips on Spinning Indie.