By Jennifer Waits on September 13, 2012 in College Radio 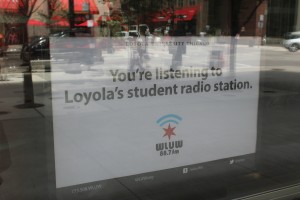 Over the summer I was in the Chicago and Urbana-Champaign area for a combined vacation/trip to the Grassroots Radio Conference.

I’ve chronicled the first of these six visits, to Loyola University Chicago’s student radio station WLUW 88.7 FM, on Spinning Indie. I was particularly excited to check out WLUW because I wanted to see the state of the station following its 2008 break with its local public radio partner WBEZ.

When Loyola University announced that the station would be ending its relationship with WBEZ in order to serve more of an educational purpose on campus, many expressed concern that the station would no longer welcome community volunteers. Around that time, a group of volunteers did leave WLUW and branched out on their own to form a new community radio station known as the Chicago Independent Radio Project (CHIRP). However, it appears that several years after the management changes at WLUW, the station’s air sound hasn’t changed dramatically. Community volunteers also remain, many of whom have been on the air for decades.

Read more about WLUW and see all 31 of my radio station field trips over on Spinning Indie.