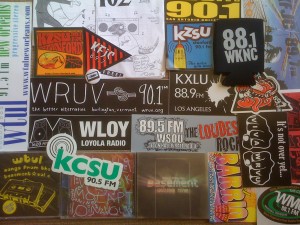 Some of the Radio Stations That Attended the 2011 CBI conference (Photo: J. Waits)

As college radio volunteers and DJs are getting settled into the new school year, it’s about time to start making hard choices about which college radio conferences to attend. October is a busy month, with both CMJ and College Broadcasters Inc. (CBI) hosting their annual conferences. Additionally, the 72-year-old Intercollegiate Broadcasting System (IBS) will be holding 4 different regional conferences between September and December.

Here are some of your options:

October 25-27, 2012: CBI National Student Electronic Media Convention, Atlanta, GA. More than 80 sessions will focus on all forms of student electronic media, from terrestrial radio to television to netcasting. I’ll also be a featured speaker at the event, participating in a panel with some folks from College Radio Day. Discounted pricing ends September 30.

Saturday, December 1, 2012: IBS West Coast Conference, Los Angeles, CA. This event will be held at Champs Charter High School for the Arts. Champs is home to its own Broadcast Communications Academy and radio station.