WTJU was the impetus for my trip to Virginia last month, as the University of Virginia-based radio station invited me to speak at its College Radio: Then, Now and Next symposium on St. Patrick’s Day. I’d long known about the station and it was actually my 17th (and final) stop on my Spinning Indie 50 State Tour series. 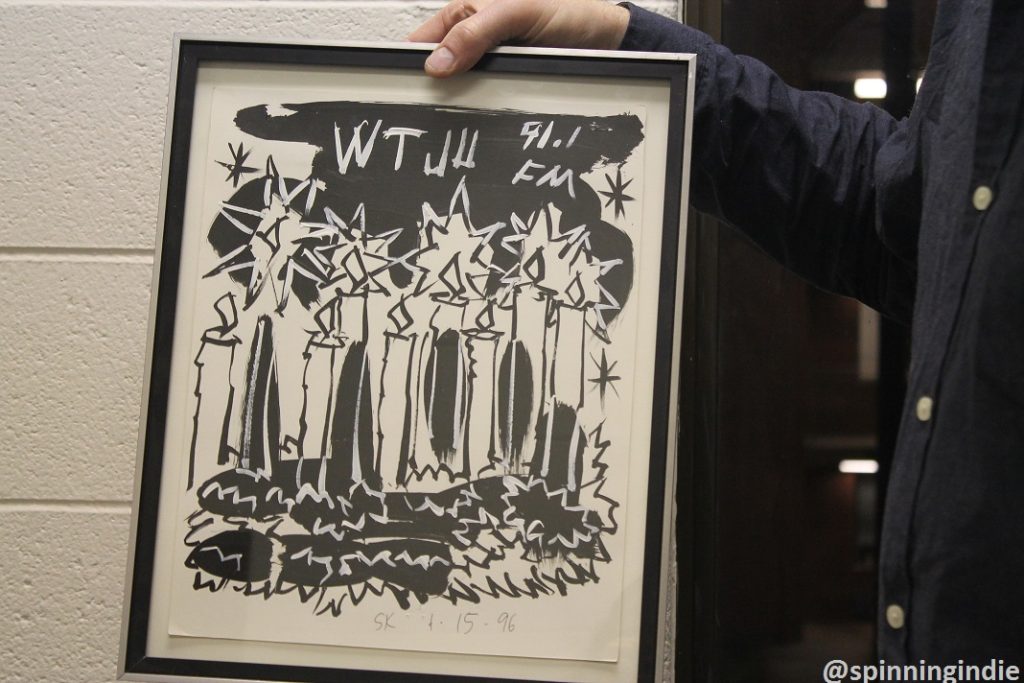 One of many Steve Keene paintings at WTJU. Photo: J. Waits

It was great to catch up with WTJU General Manager Nathan Moore in person, as I had been in touch with him for many years and had interviewed him for the station profile that I wrote in 2012. Much has changed since then, including the launch of a student-focused low power FM (LPFM) radio station (WXTJ), the debut of a WTJU camper and celebrations in honor of the station’s 60th anniversary this year. 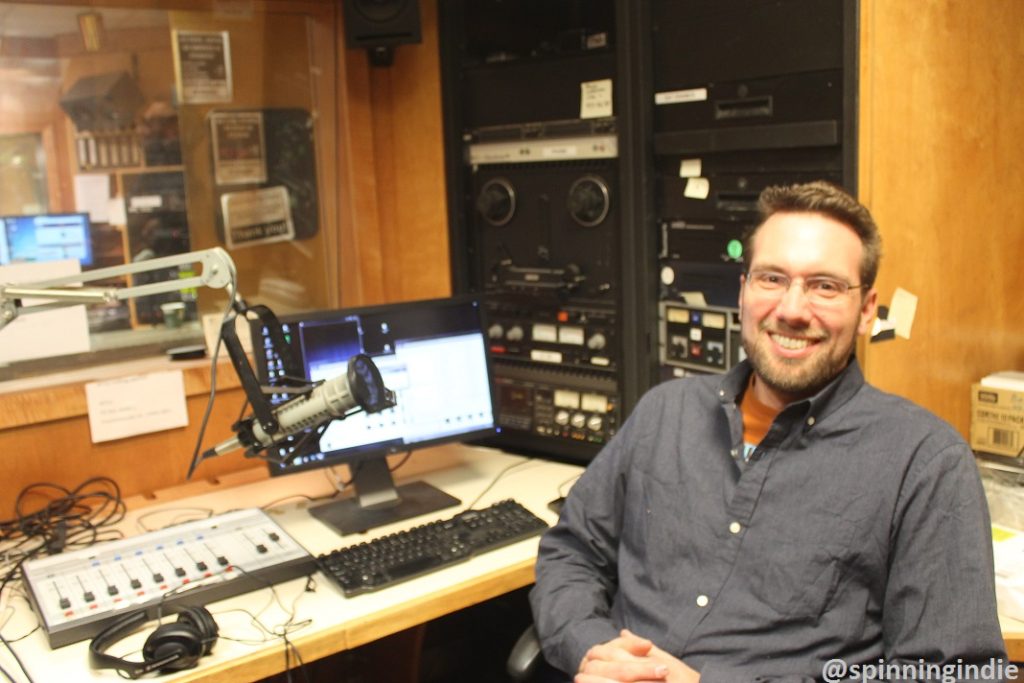 Nathan Moore in one of WTJU’s studios. Photo: J. Waits

So, at the end of a long day of college radio immersion, I popped by WTJU as it was setting up for one of its regular Friday night live music events. These Lambeth Live sessions happen in a lounge that’s adjacent to the radio station and on the night of my visit, the Bobby Midnight Band was preparing to play. 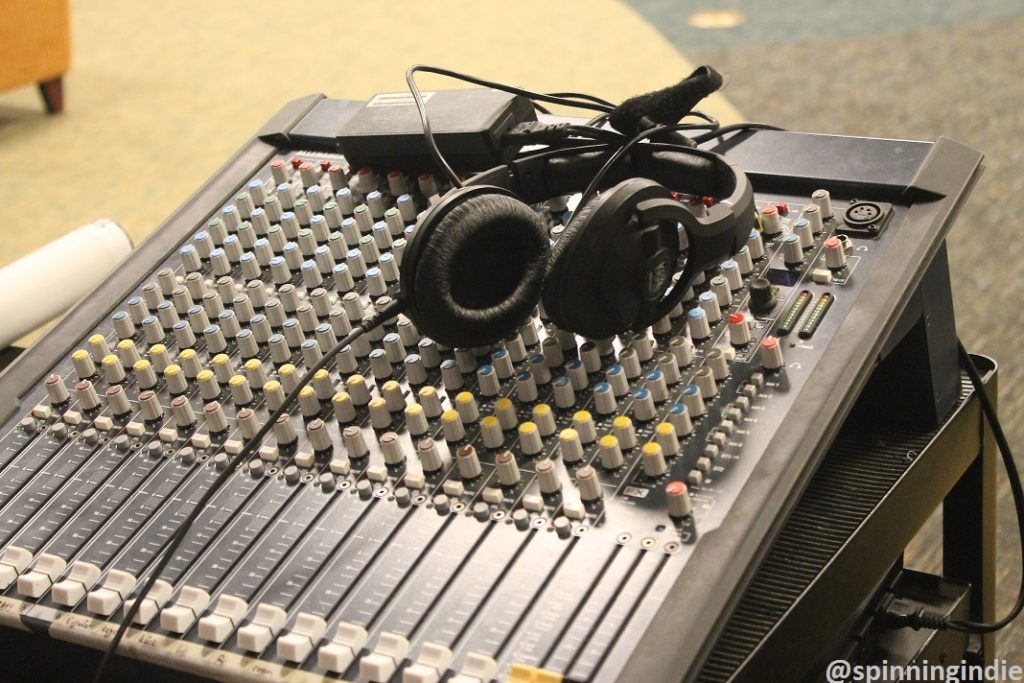 My friend and Radio Preservation Task Force colleague Laura Schnitker joined me as we toured WTJU with Moore. On the cusp of its 60th anniversary when we visited, WTJU has had several celebratory events in the past few weeks and is currently in fundraising mode with a week-long “Rock Marathon” pledge drive through April 16. The marathon schedule is jam-packed with special programming, including shows focused on hardcore, math rock, psychedelic music, and material from specific years (1967, 1977, 1987, etc.). This pattern of fundraising repeats with other WTJU genres during various points of the year. 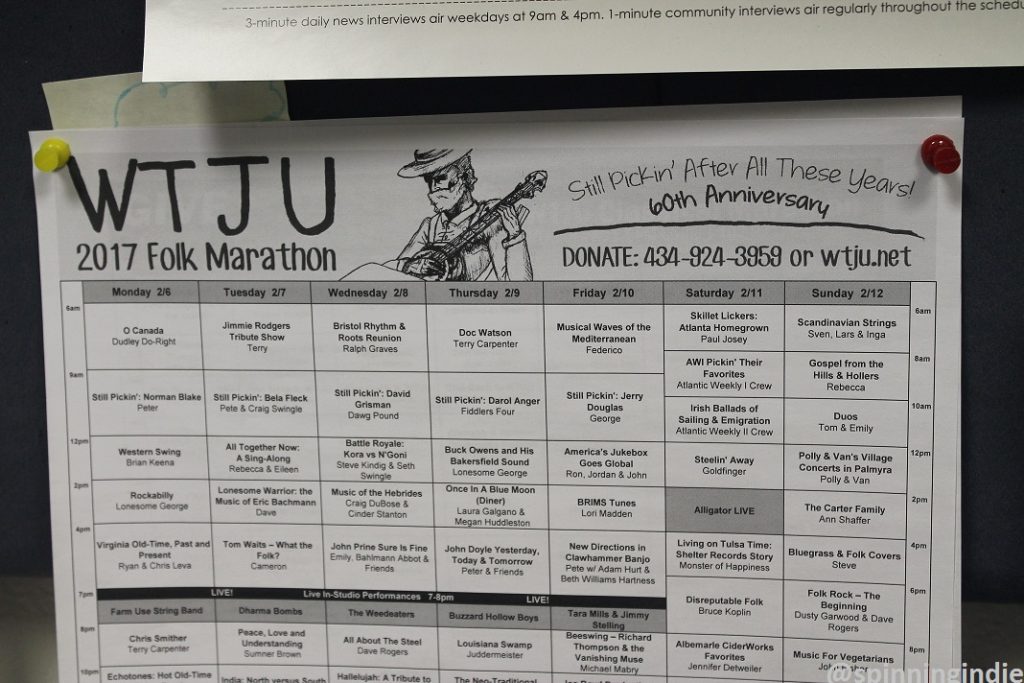 Coincidentally, the day that I am publishing this piece (April 13) is University of Virginia founder Thomas Jefferson’s birthday and those paying close attention may notice that the station call letters W-T-J-U are in honor of his influence and stand for “Thomas Jefferson’s University.” Located in Charlottesville, Virginia, in close proximity to Thomas Jefferson’s Monticello plantation, the campus feels drenched in history. 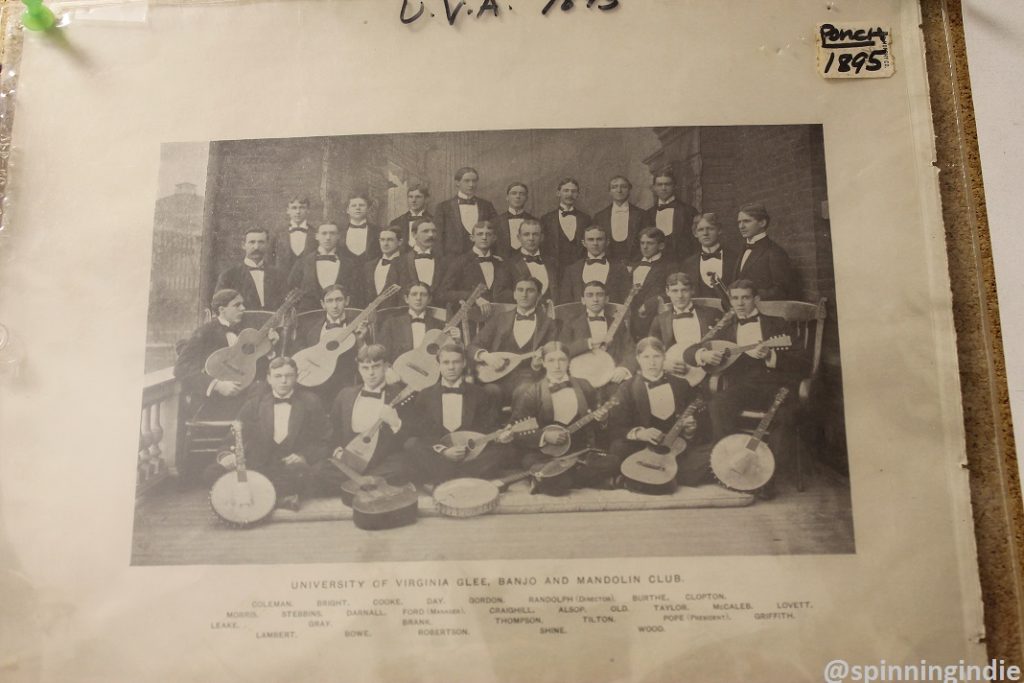 University of Virginia ephemera on the wall at WTJU. Photo: J. Waits

College radio history at University of Virginia is also pretty interesting, with carrier current station WUVA launching in 1947 and eventually evolving into a commercial FM station by 1979. About a decade after WUVA began, WTJU was launched. According to Moore,

…my understanding is that both WUVA and WTJU were founded (or co-founded) ten years apart by the same guy: George Wilson, a professor in the Department of Speech and Drama. He and others had gotten WUVA going as a carrier current. But he maintained an interest in establishing another station that was FM and non-commercial. And from what I hear, he had an abiding interest in having a station that was more geared toward ‘good music’ (i.e. classical) than the popular music WUVA was playing at the time.” 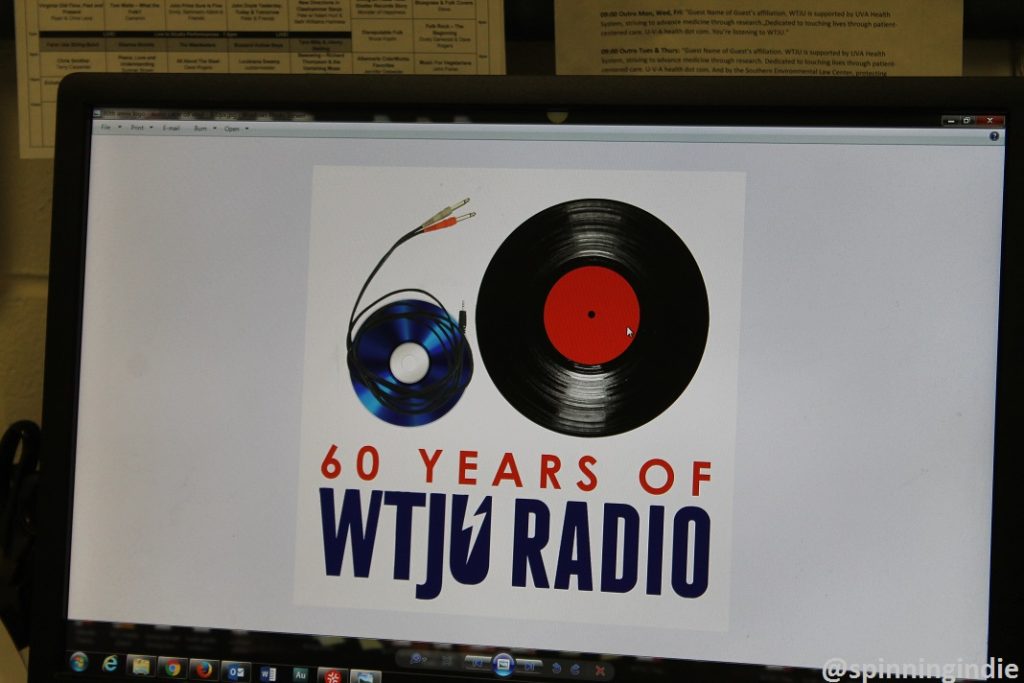 As with many college radio stations, the music genres played over the air changed with the decades. Moore told me that during the 1970s, “WTJU started playing lots more music other than classical. While the station had never been truly 100% classical music, it was almost all classical in those first 13 years or so. By 1970, students with broader tastes started pushing in rock, jazz, and folk. Also a bunch of campus news. Supposedly with some contentiousness, though I’ve heard different versions of that. All those music genres remain on the air today.” 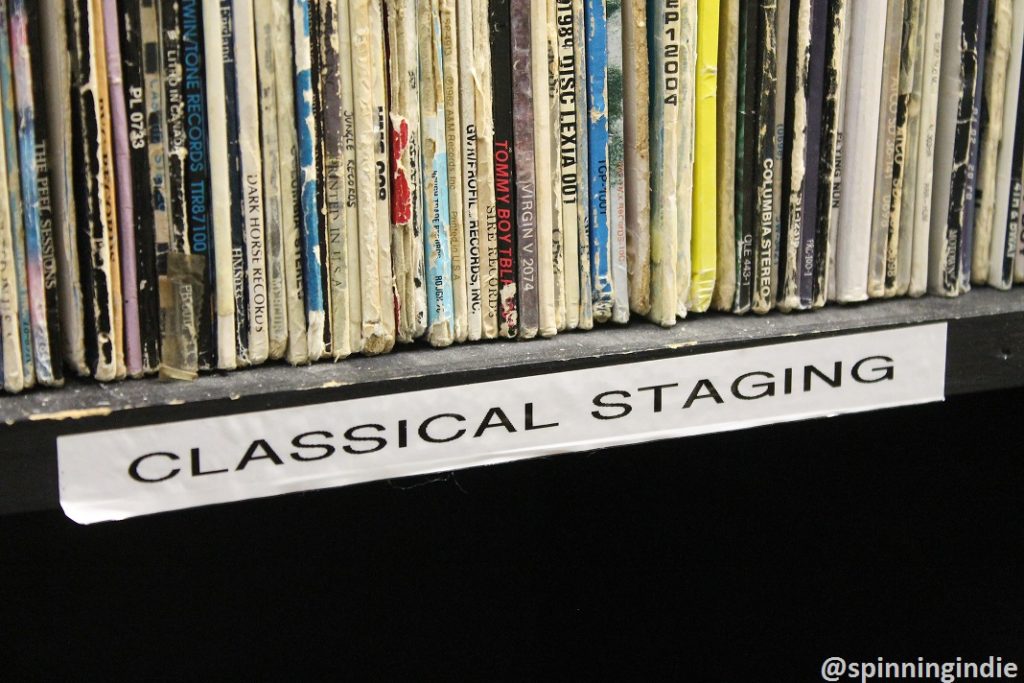 The 1980s at WTJU coincided with the assumed heyday of college radio and Moore told me that it was one of the station’s “golden eras.” He explained, “…this is when guys like Stephen Malkmus and Bob Nastanovich of Pavement, Dave Berman of Silver Jews, James McNew of Yo La Tengo, Boyd Tinsley of the Dave Matthew Band, Rob Sheffield (writer, Rolling Stone) and Steve Keene (artist) were all DJs at WTJU.” He added that they were part of an “influential DIY scene that spilled over into Charlottesville’s music scene and far, far beyond.” 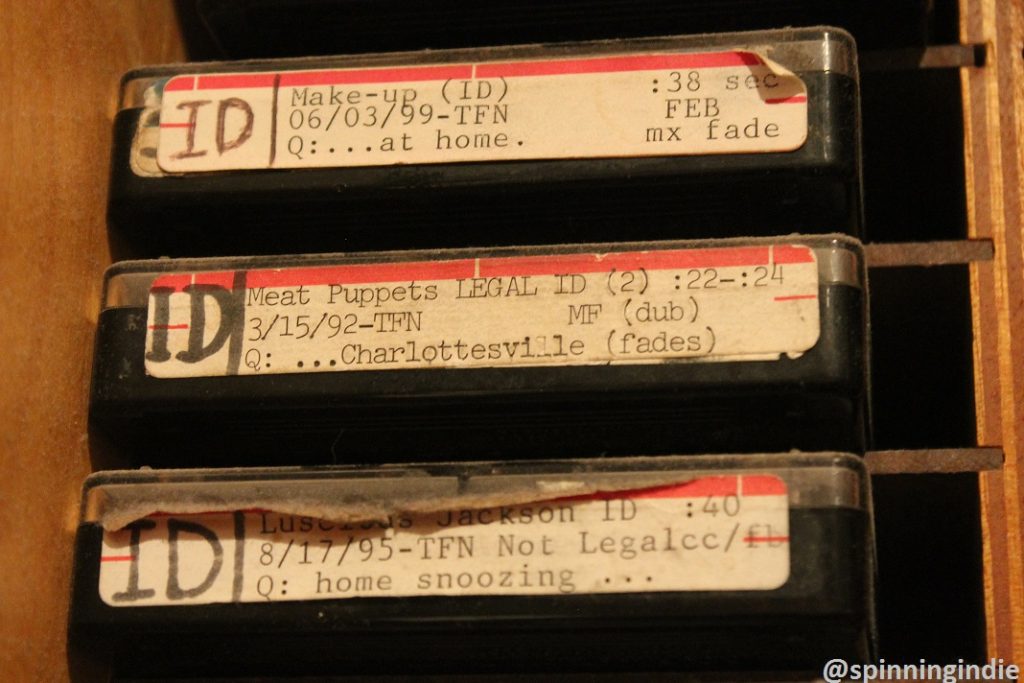 The mid-1990s saw a change in the DJ makeup at WTJU. Its first paid General Manager, Chuck Taylor, was hired and he “… sort of oversaw the shift of WTJU from a traditional *college* station to more of a community station at UVA. By 2000, the percentage of hosts was less than 30% students. The station also added three more full-time staff in addition to Chuck by the early 2000s,” according to Moore. 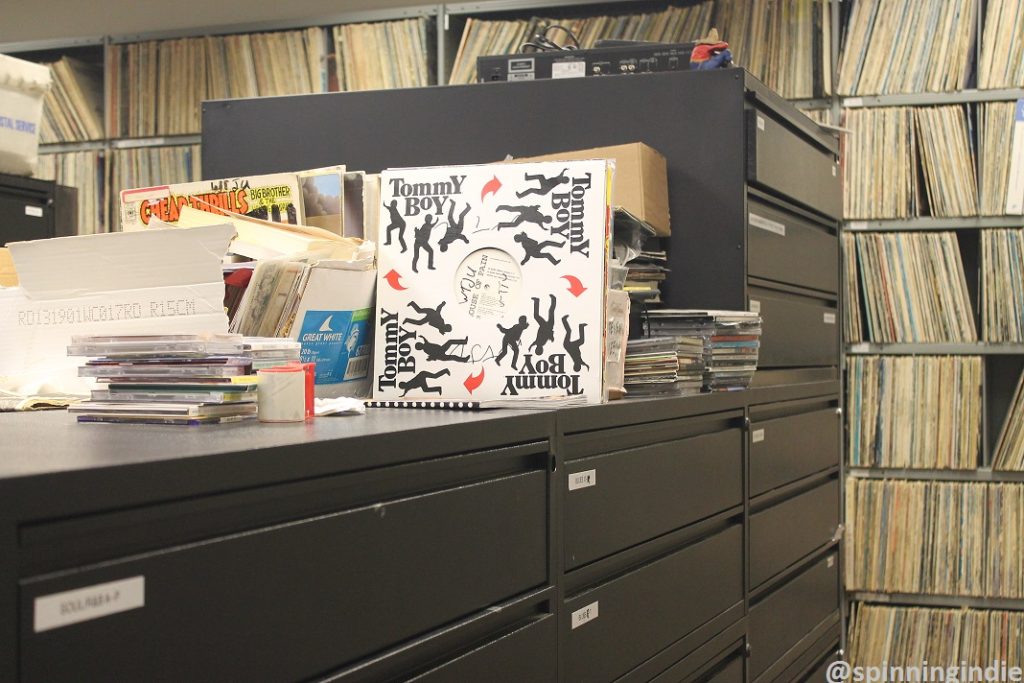 After some drama with Taylor’s short-lived replacement in 2010 (which we covered on Radio Survivor), Moore was hired as GM. By 2013, Moore helped found streaming, all-student radio station WXTJ in order to address the low student participation at WTJU. It received a new low power FM license and launched over 100.1 FM in April, 2016. Between the two stations, there are now around 300 radio participants at WTJU/WXTJ. 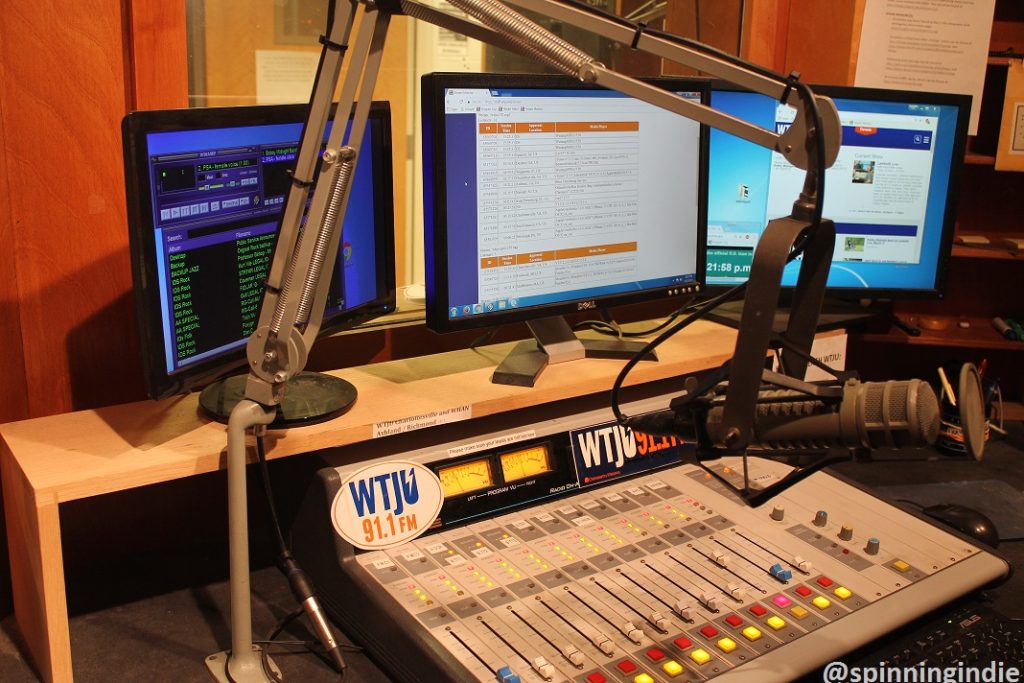 Today, WTJU is probably best described as a community radio station. It broadcasts in Charlottesville at 91.1 FM and during daytime hours and on the weekends, it can also be heard on 102.9 FM in Richmond. College radio station WVCW (see my recent visit report) leases time from them over 102.9 FM on weekday nights. 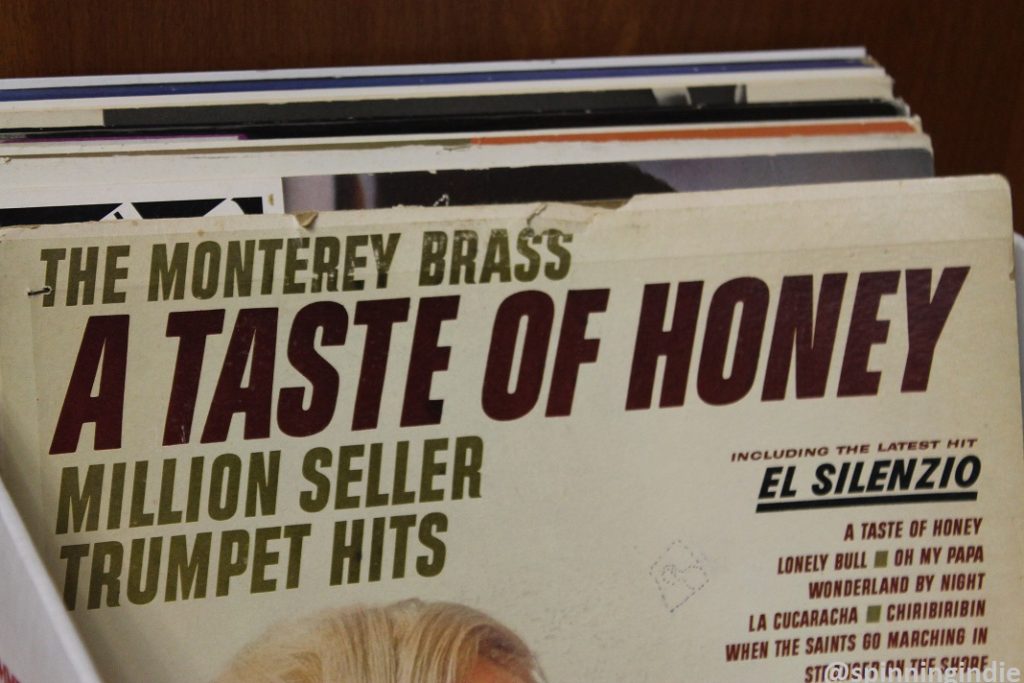 WTJU has around 120 shows hosts, with approximately 20 students in the mix. Live programs run from 6am to 3am and WTJU airs syndicated news and public affairs shows from 3am to 6am. Programming is “…sort of a stratified block program schedule,” according to Moore. He explained that, “…there’s quite a bit of diversity within genre that happens from one day to the next. So, for example, we air classical music weekdays 6-9am. Then jazz & blues 9am-12pm, rock 2-4pm, folk & roots 4-7pm, etc.”

WTJU occupies a large space on the second floor of the tucked-away Lambeth Commons building at University of Virginia. When we visited on a Friday night, much of the activity was focused on the band playing live that night. A few station staffers were in the studios of both WTJU and student radio station WXTJ. We started our tour in Moore’s office, which apparently used to be a pep band storage room full of uniforms. He pointed to an office next door, telling us that it had been packed with instruments. 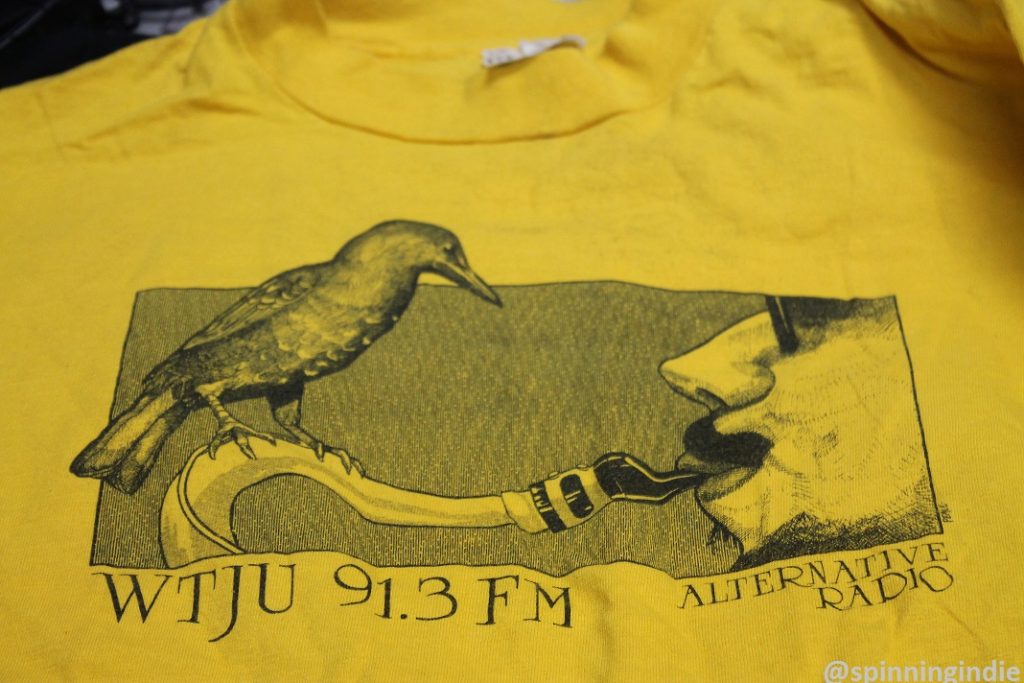 We made our way through the station lobby, passing its mail room, kitchen, storage areas, WXTJ studio, record library, production studios, on-air studio, and music director office. Promotional posters lined hallway walls and I was excited to see numerous Steve Keene paintings. I’ve seen his paintings at other college radio stations, but WTJU used to be Keene’s radio home, so his work is everywhere. You can see a gallery of his work on the University of Virginia website. 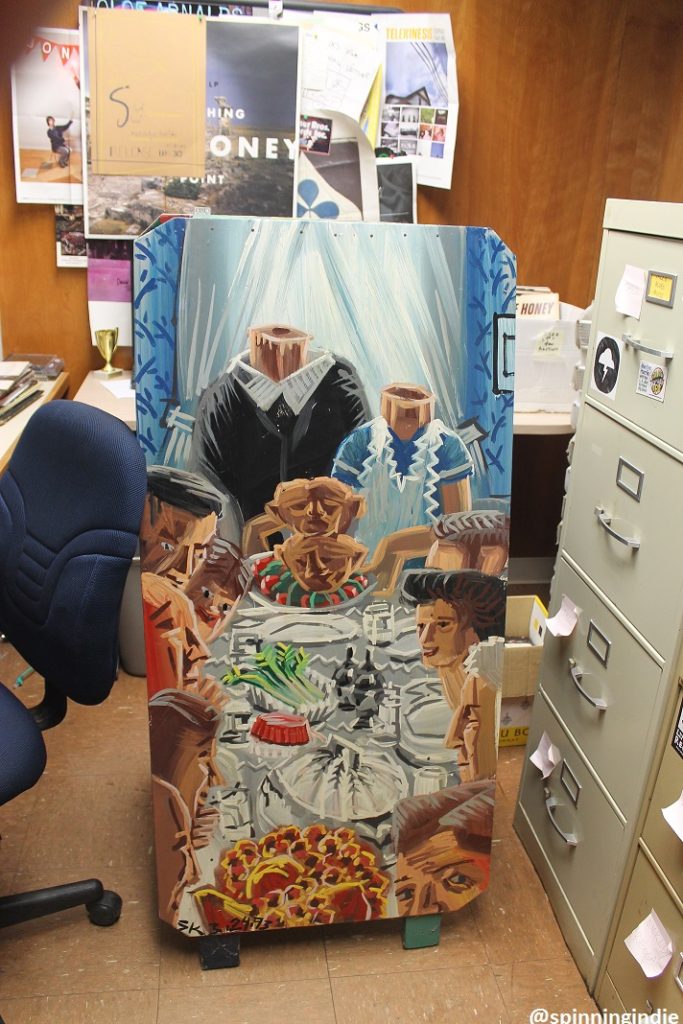 One of the many Steve Keene paintings at WTJU. Photo: J. Waits

It was also nice to see some historical items, including a wall of carts with old promos and station IDs from the likes of Sleater-Kinney, Pavement, and the Meat Puppets in the WTJU studio, file boxes of ephemera in a closet, and a pile of past marathon T-shirts in Moore’s office. 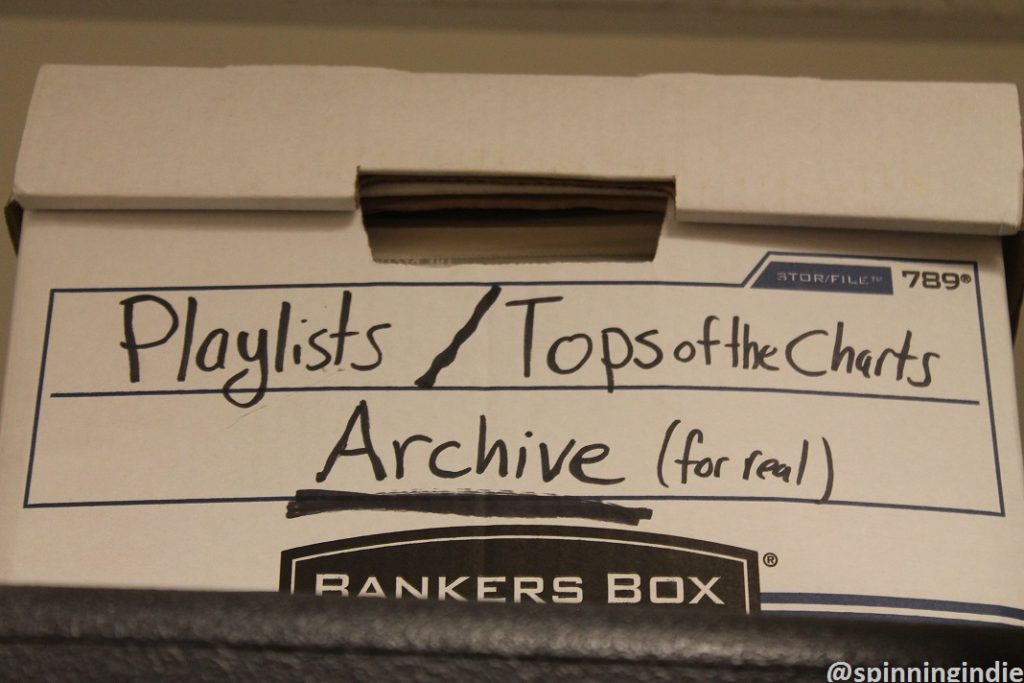 Box of playlists and top of the charts lists at WTJU. Photo: J. Waits

I’m a bit obsessed with radio classes for kids and teenagers, so I was pleased to hear that WTJU runs summer camps for middle school and high school students. Kids this summer will have their programming broadcast over FM on WXTJ. 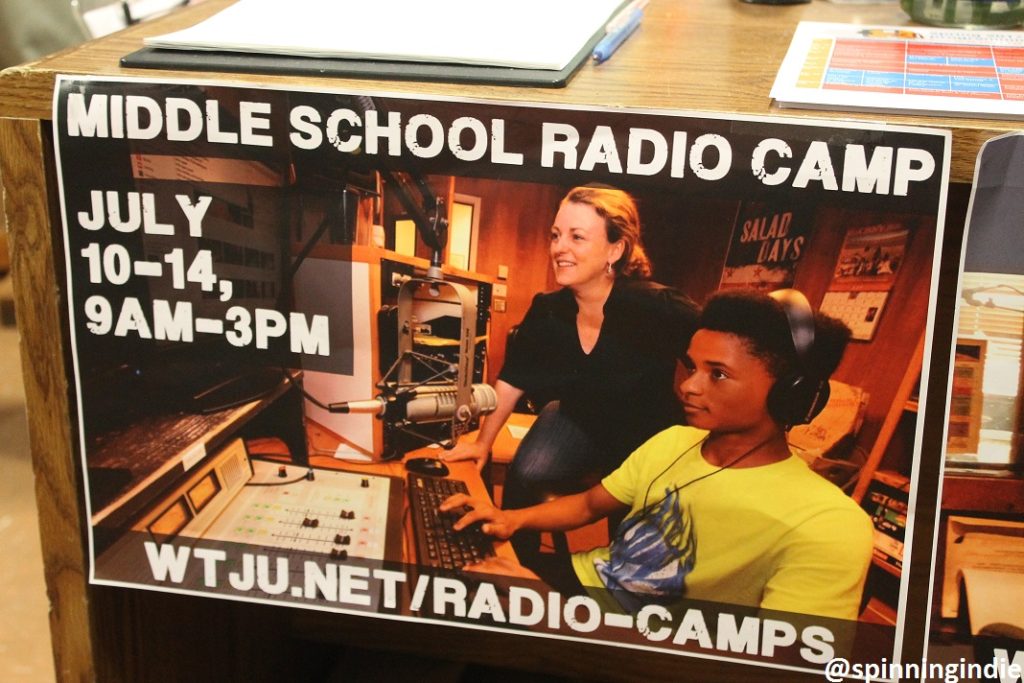 Another ongoing fascination for me is radio station-branded vehicles and when I visited, Moore mentioned that he was renovating a camper for a future project. Recently unveiled (see photos on Facebook), WTJU’s bright blue station camper hints of some fun future endeavors. Moore told me, “It’s an old 15-foot pull-behind 1971 camper that I got for the price of three turntables. We’re renovating it to turn it into a mobile recording studio / pop-up concert venue / food truck. And we’ll be able to send audio back to the station to broadcast from pretty much anywhere we go. Exactly how it’ll be deployed is a work in progress, but the idea is to use it as an amazing community engagement tool. Or put differently, we’ll be the party that shows up at events.” 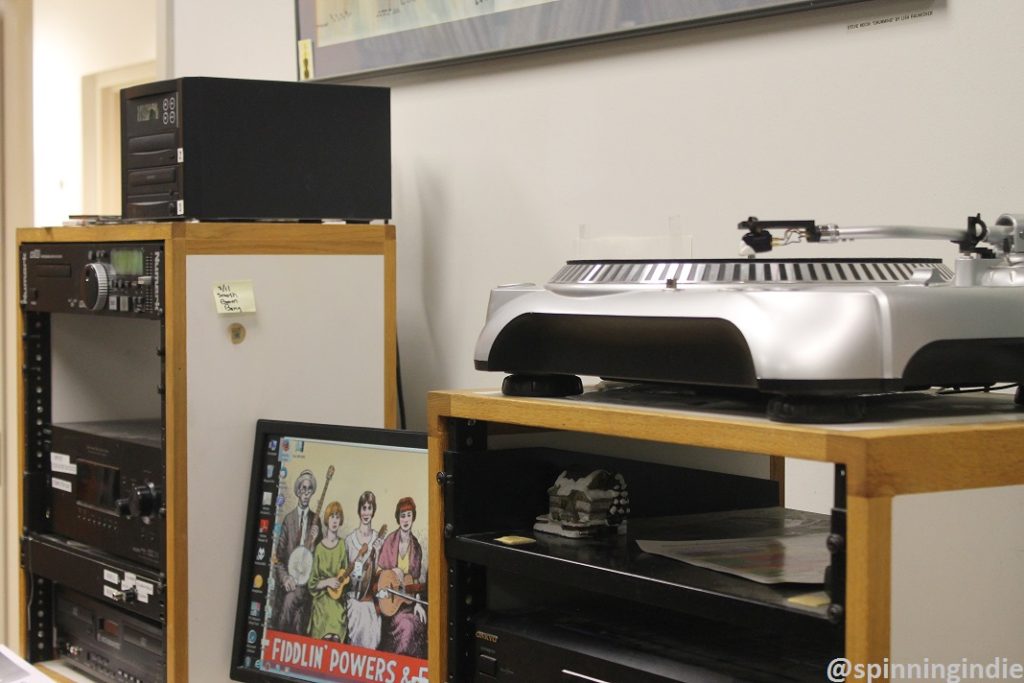 With boundless energy and immense passion for radio, Moore also organized a college radio symposium in the midst of camper renovations, anniversary planning, and the day-to-day operations of WTJU. He explained, “The inspiration for the symposium basically stemmed from some conversations around the station. Conversations that are certainly happening at other stations too – things like where is college & community radio going? What will really look like in a few years? What will keep students and others engaged in a media outlet like ours? How can we best serve our community and university with our on air and off air activities?” Moore added, “Plus, I really, really enjoy getting smart people together for a good conversation. It’s like my favorite thing.” 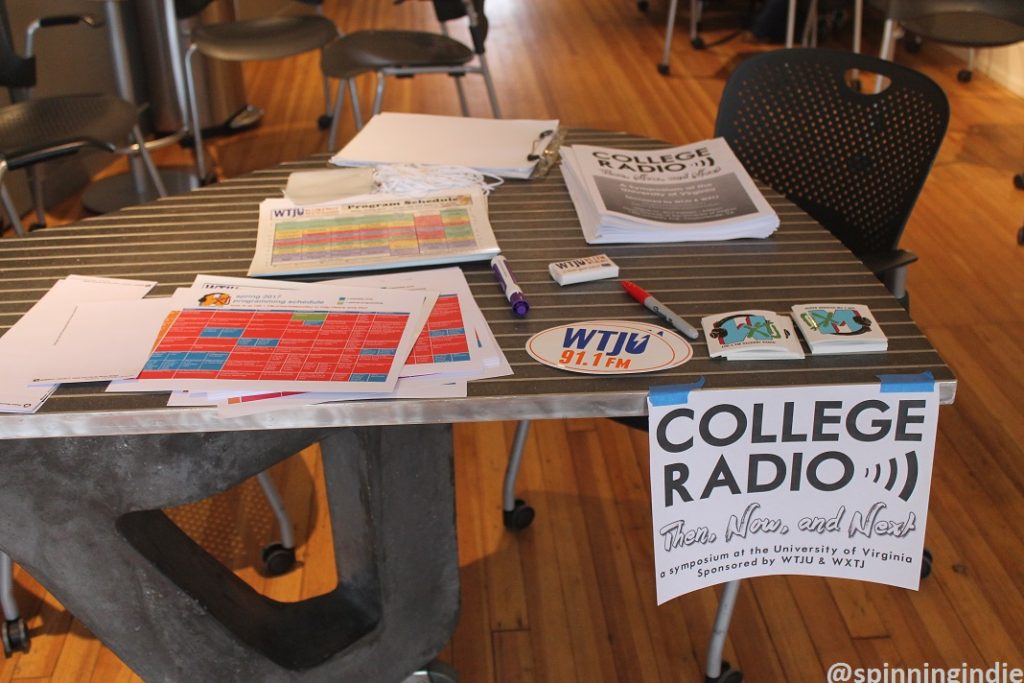 Table at entrance to College Radio: Then, Now and Next symposium. Photo: J. Waits

Thanks so much to Nathan Moore for the wonderful conversations during the “College Radio: Then, Now and Next” symposium and for the tour and back story on WTJU and WXTJ. I’ll be profiling WXTJ in a separate post. 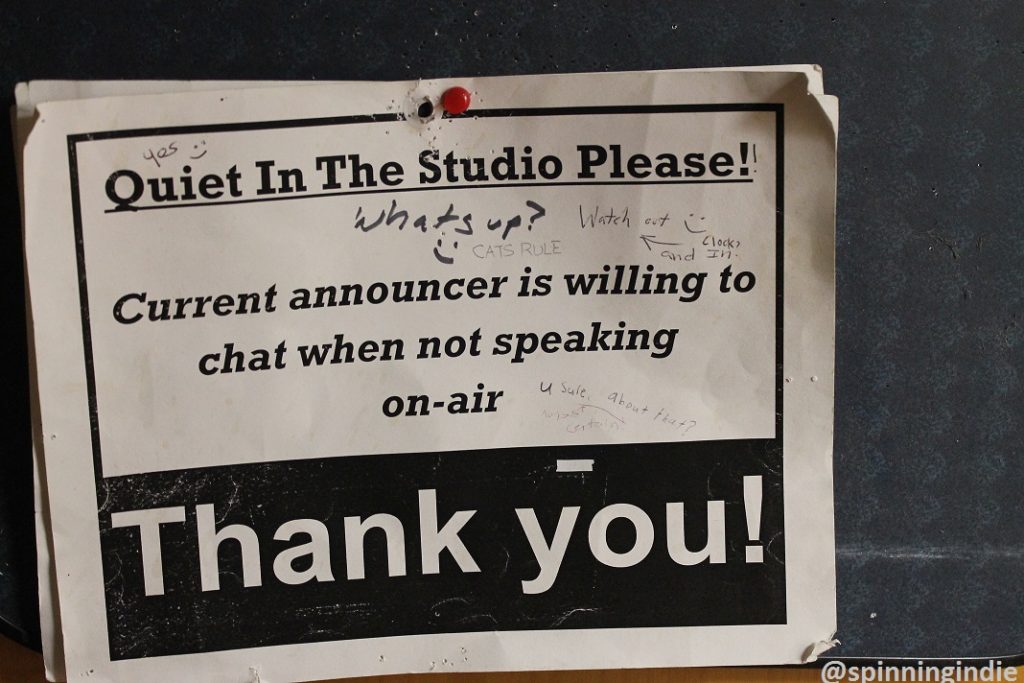 Quiet in the Studio sign at WTJU. Photo: J. Waits

This is my 129th radio station field trip report, with more to come from my California, New York, Virginia and Philadelphia-area travels. My most recent field trips can be found on Radio Survivor and a full list of all my station tour reports is compiled on Spinning Indie.