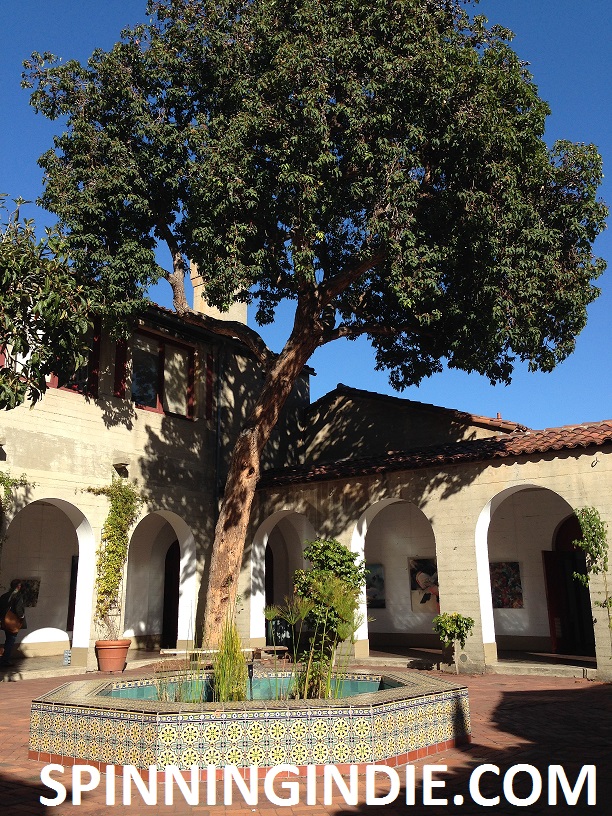 So, on November 7, 2014, I headed over to the SF Art Institute to see not only the installation of the Radio Free Benjamin art exhibit, but also to check out The Tower Radio. The whole experience was incredibly nostalgic for me, as my first apartment in San Francisco was just up the street from the Art Institute. I frequently attended film screenings there and also took a few weekend classes there in photography and fine-art film making. Now that I live in a completely different neighborhood, far from the Art Institute, it always feels a bit like stepping back in time when I venture to that side of the city. 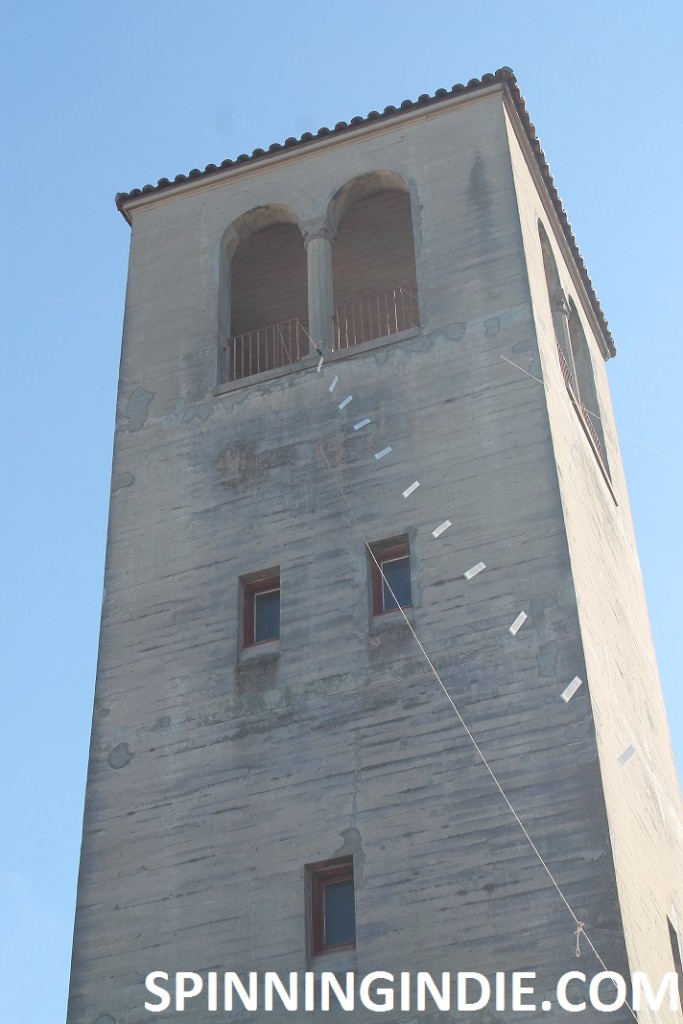 The campus itself is beautiful, with both modern and Spanish architectural touches. Located in Russian Hill, just on the edge of North Beach, an open plaza area in the center of the the art school has grand views of the San Francisco Bay and of iconic San Francisco buildings like Coit Tower and the Trans America Building. 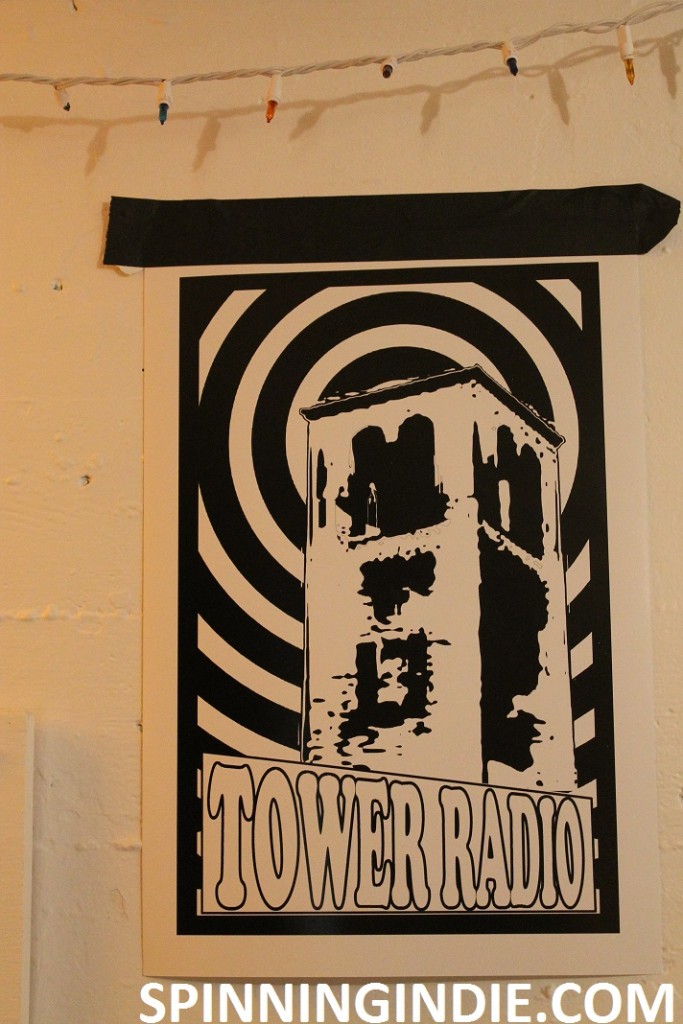 After first stopping to take a look at the Radio Free Benjamin exhibit (more about that in a separate post), I then met up with Tower Radio Staff Advisor (and SFAI New Genres Studio Coordinator) Renee Rhodes. Rhodes has been involved with the station for 3 years, but told me that radio began on campus around over a decade ago when a faculty member started a pirate radio station as a class project. 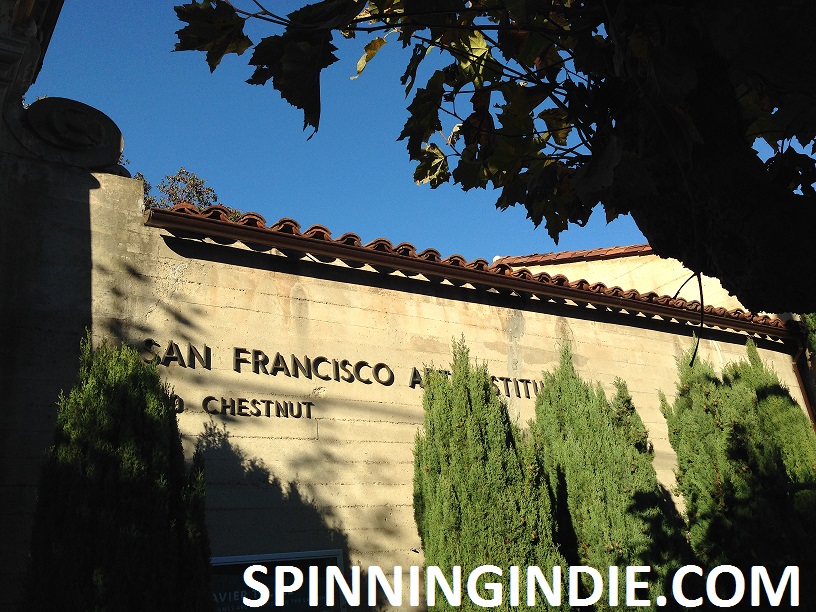 Intrigued about that, I spoke over email with the original creator of The Tower, Julio Morales. Morales, who is no longer at the SF Art Institute, told me that in 2002 he created a course called “We Want the Airwaves,” which “examined the history of artists working with sound and also how radio has been used as a form of social change.” He explained that as part of the class, they developed “the Tower” radio station and initially began broadcasting over 102.5 FM from “the actual SFAI tower- where the library is housed.”

Morales said that he decided to start the radio station in part because he was “interested in sound” and also because “SFAI did not have a class that offered audio training or a class focusing on the history of sound based artistic practice.” He wrote that, “Another interest was the amazing archive of lectures at the SFAI library from the last 60 years- from John Cage to Wally Hedrick to Kathy Acker- all these recording[s] only survive as cassettes- so part of the class was to digitally preserve the archive as well.” 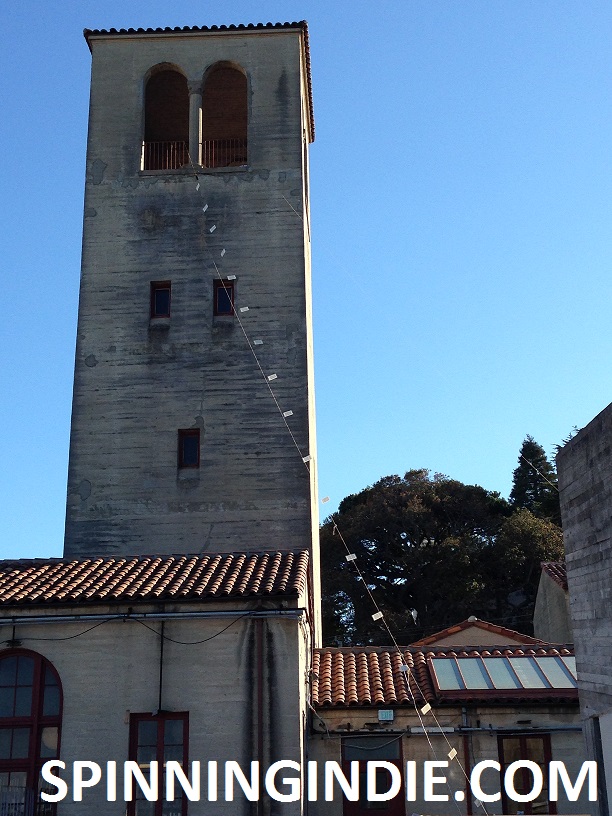 The Tower operated as a pirate station and when it was on the air it broadcast for a range of about 2 miles. Morales said, “It was straight up pirate!…to me it was a public art project. The transmitter was/is 40 watts and [was] made by legendary media outlaw and hero Stephen Dunifer from Free Berkeley Radio.” The pirate radio broadcasts eventually ceased due to a variety of reasons, including changes in the faculty and a station move. Morales explained that “…black mold found in our original Studio 9 made the station move and [it] was more difficult to get the antenna high enough for transmission…” Although the terrestrial transmission died, Morales said that he is happy that online streaming continues, telling me, “I am just glad it is still there and SFAI students love working with the medium of radio! I still listen online- [there are] great programs.” 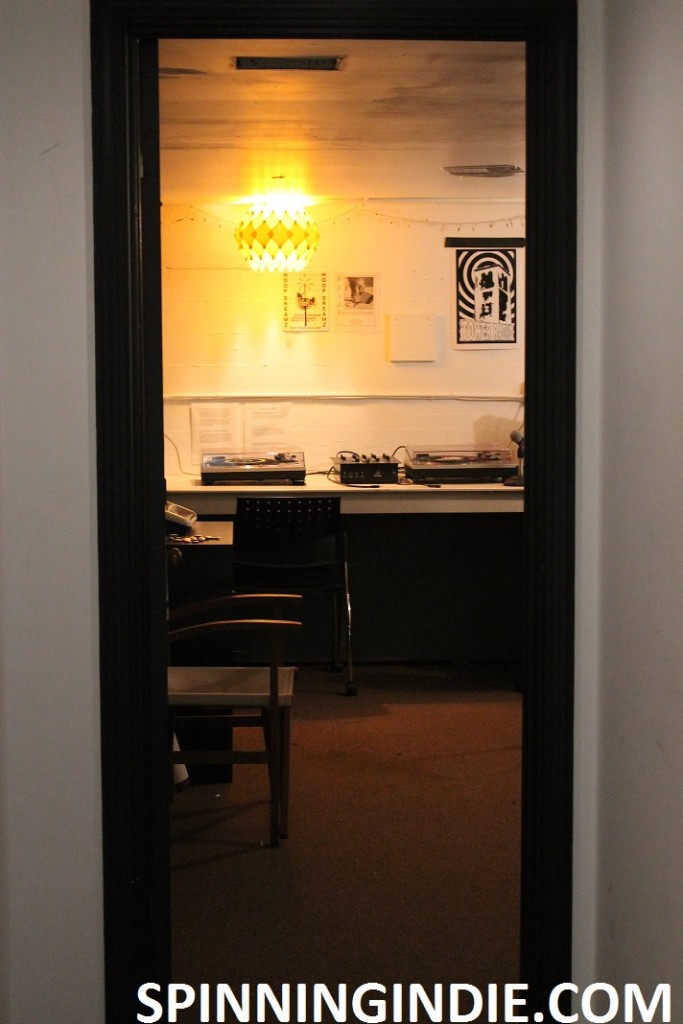 Currently, The Tower Radio is a streaming radio station that is run out of a small room just down the hall from Rhodes’ office. It’s been in that location for around 2 years, after initially being located in a few different campus locations (including some buildings that are now decommissioned). Coincidentally, it’s a short walk upstairs from a photography lab, where I remember using the dark rooms many years ago. 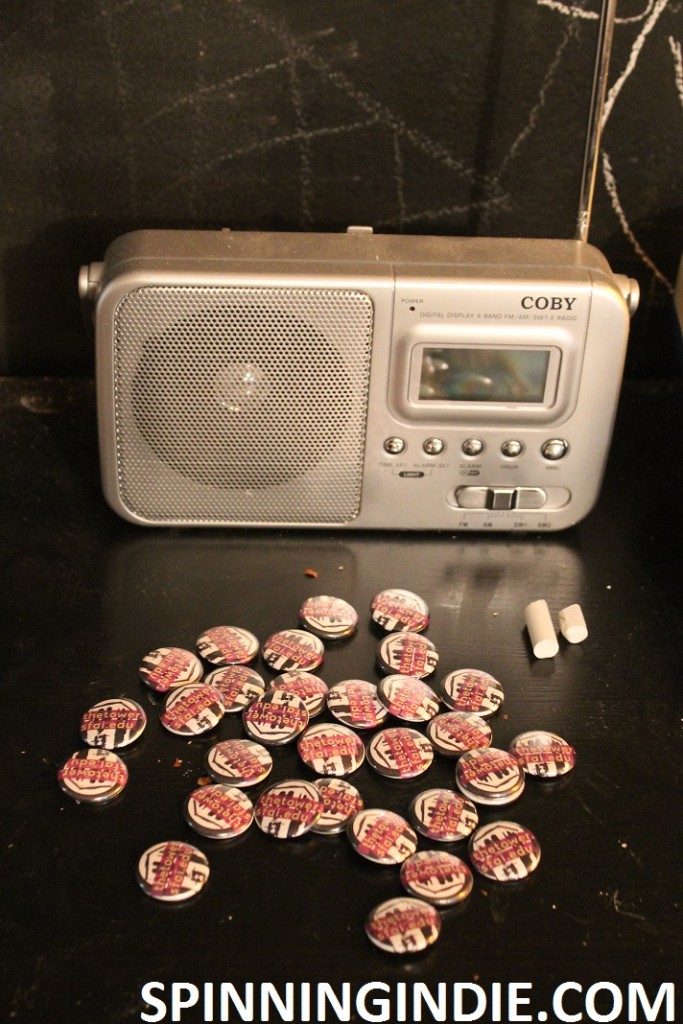 One of Tower Radio’s Monitors, student Pedro Verdin, met up with us and also shared his thoughts about the station. The past few years have been focused on rebuilding the station and “picking up the pieces,” according to Verdin. He and Rhodes explained that after the station had been shuffled from place to place, it “lost momentum” after getting moved into a classroom. Following that “sad moment” from its history, it moved into its current space and is on an upswing. Verdin said, “now we’re getting known throughout the school” and as a testament to that he said that the station finally “made the tour,” and is now a regular stop when prospective students are shown the campus. 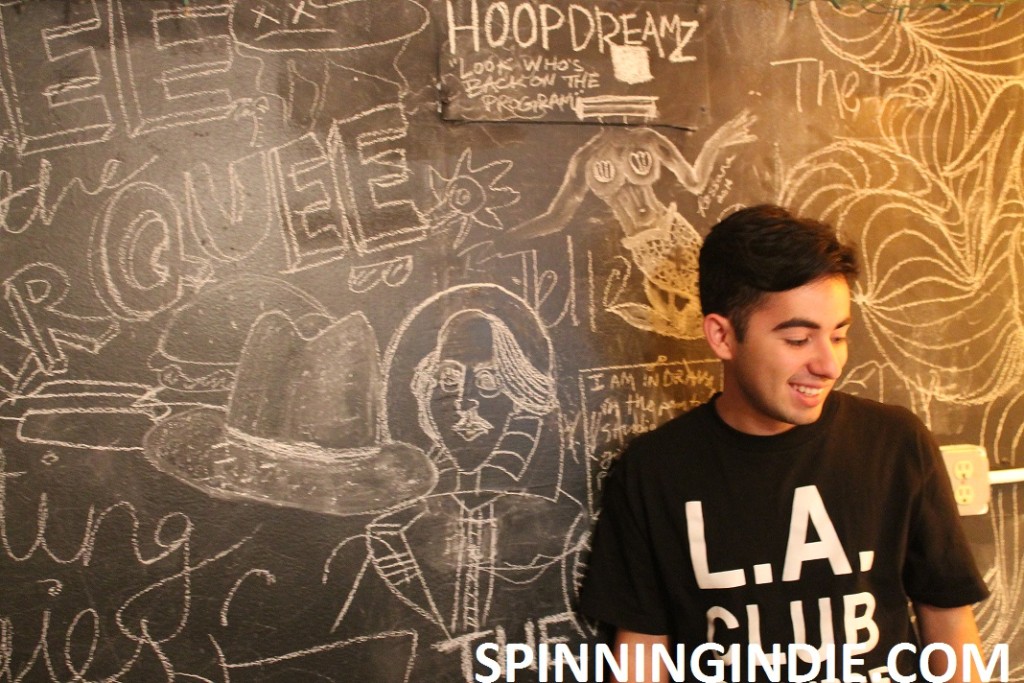 Additionally, as another stamp of campus approval, the SFAI cafe started streaming Tower Radio for its customers. Verdin said, “there’s definitely an appreciation growing” and added that students now see “the potential” of the station and also see it as a “cool space.” 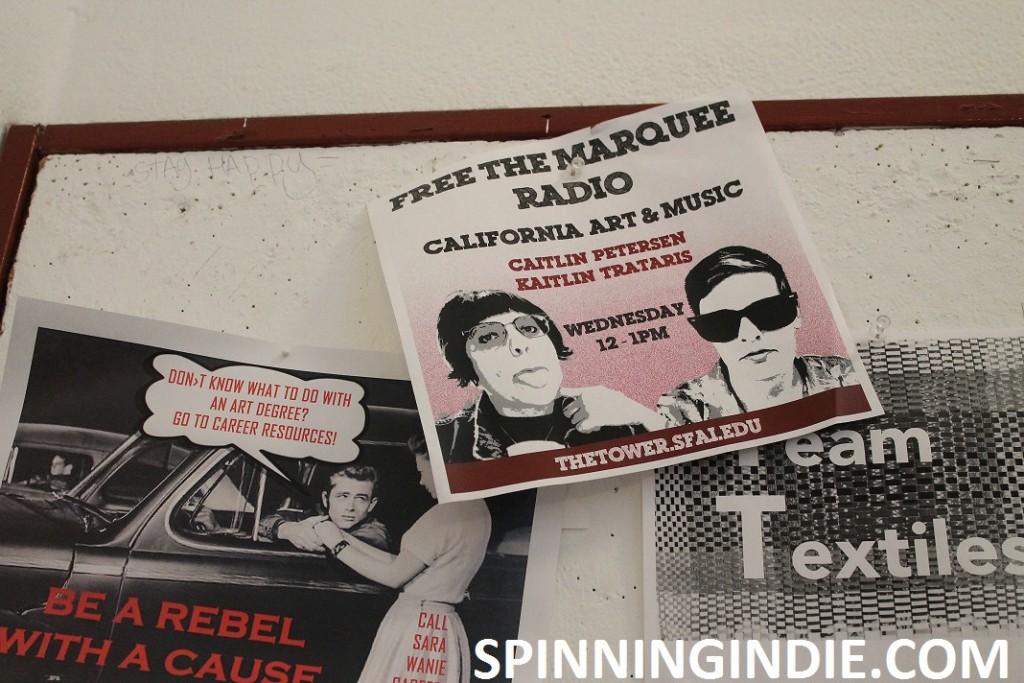 He explained that since they are at an art school, there are some interesting connections between coursework and radio programming. There’s a sound class, for example, that focuses on field recordings. Verdi said that material from that class was played over Tower Radio every Thursday. Rhodes also mentioned that there had been a 24-hour takeover event at the station that featured music and live performance pieces (see photos on The Tower’s gallery page). She said that the station is “a little bit different” since “we are an art school.” 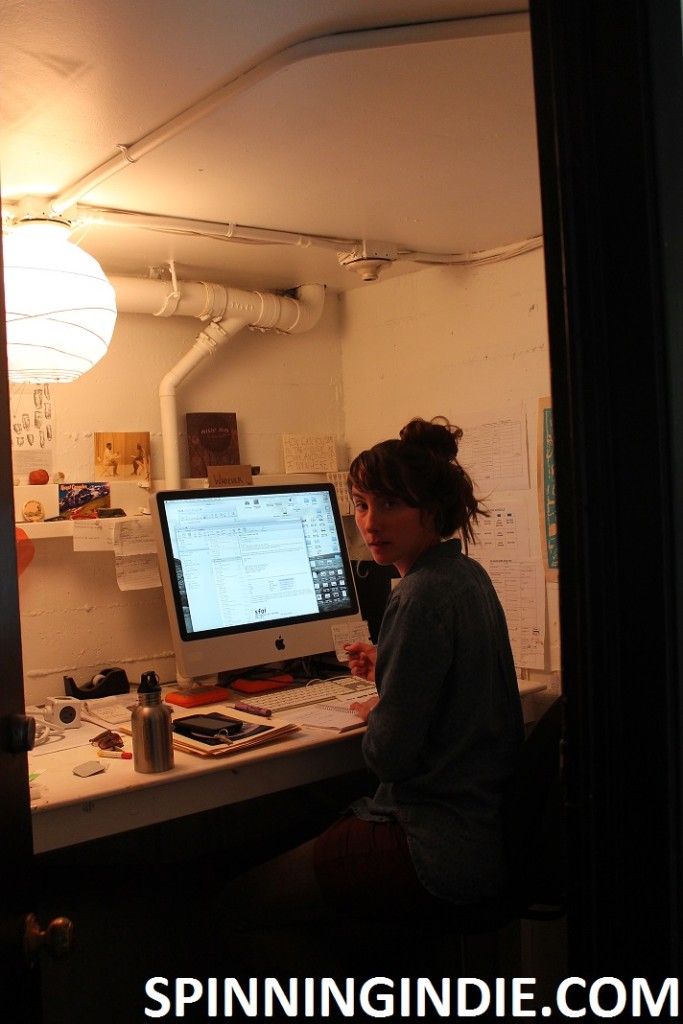 Programming on the station has included shows like “Reading Rainbow,” in which the host reads stories over the air. Another show, “How Now,” does live readings of Shakespeare and also does dramatic re-enactments, while discussing the social dynamics in the pieces. A faculty member hosts a talk  and variety show about art and another show plays audio from films as well as samples and mash-ups. 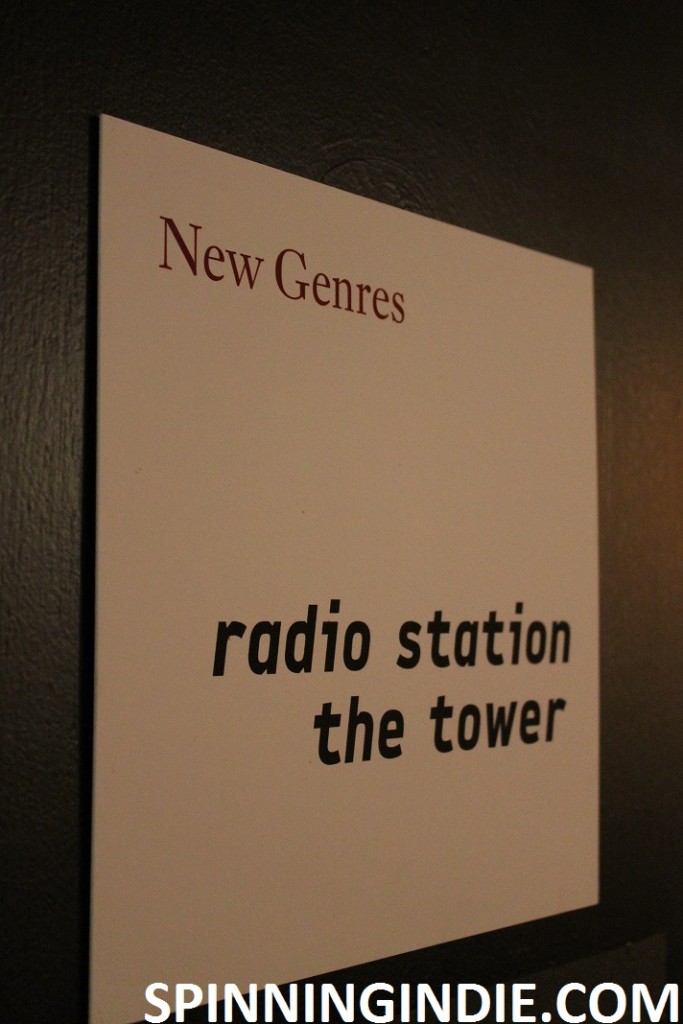 Verdin said that while there are music shows and shows that incorporate music, the station also airs sound pieces, performances, and sampling. With many show hosts coming from the New Genres and Art & Technology departments, often programming is influenced by the students’ more experimental coursework. 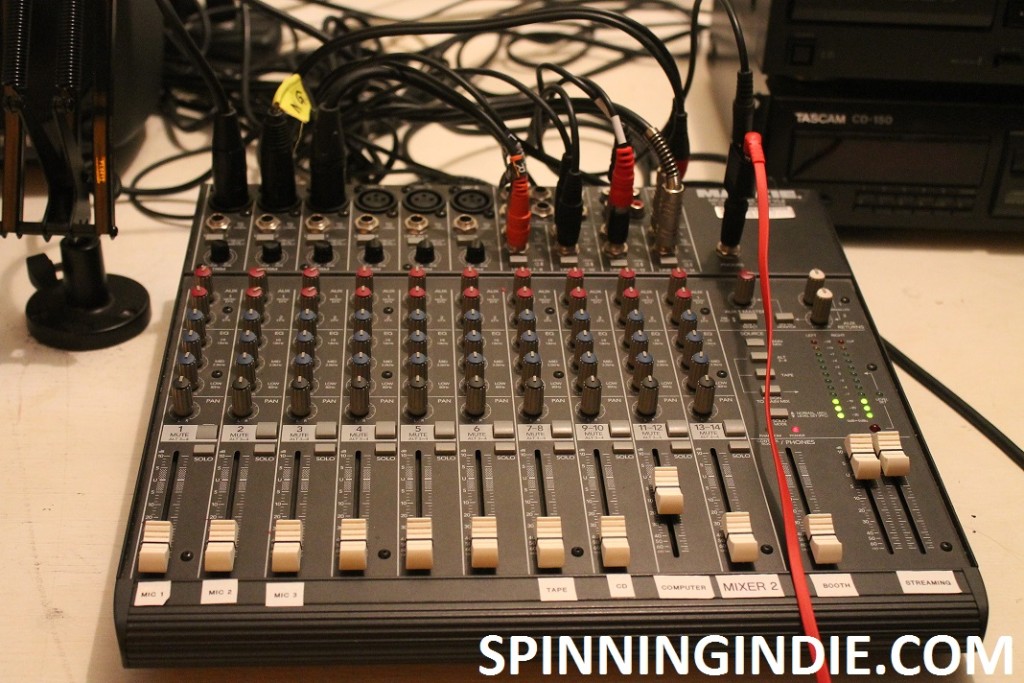 Mixing board at The Tower. Photo: J. Waits

As an example, one student is doing a project about “hold music,” so he ended up doing a radio show that airs between classes from 3:45 to 4:15 called “Awkward Spaces.” As expected, he plays “hold music.” Rhodes told me that she enjoys seeing the connections that students are making between radio and their coursework and said that it’s nice to see “radio incorporated into their practice.” 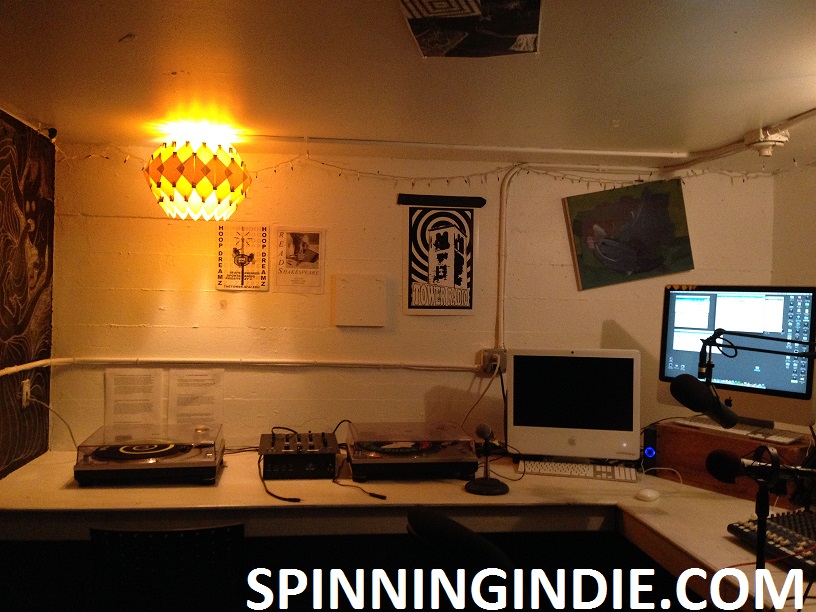 The small studio has two turntables, a tape deck, CD player, and a new mixer. People do use the tape player and a student’s donated collection of cassettes was stashed in clear view at the station. Verdin told me that they had also gotten sent tapes from a record label in Los Angeles. 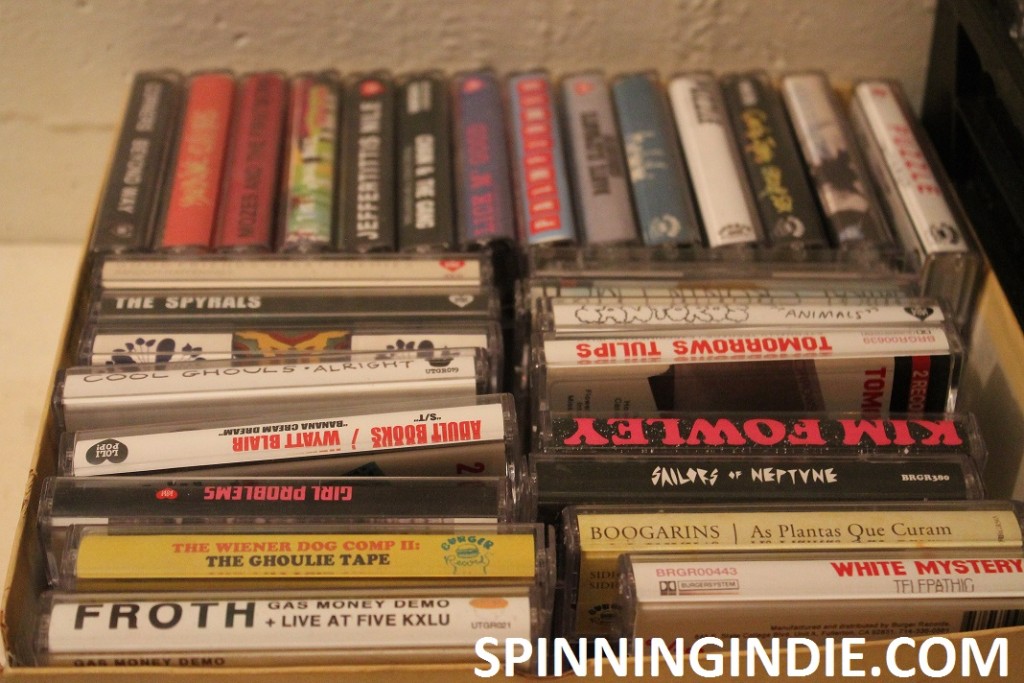 Cassettes in the studio at The Tower. Photo: J. Waits

In addition to its regular roster of shows, Tower Radio also hosts live bands and will often do recordings of in-studio performances. Since the station is adjacent to offices, classroom, and art studios, they usually host performances at night, on weekends, or on quiet Friday afternoons (when the lack of sound-proofing is less of a problem for its neighbors). 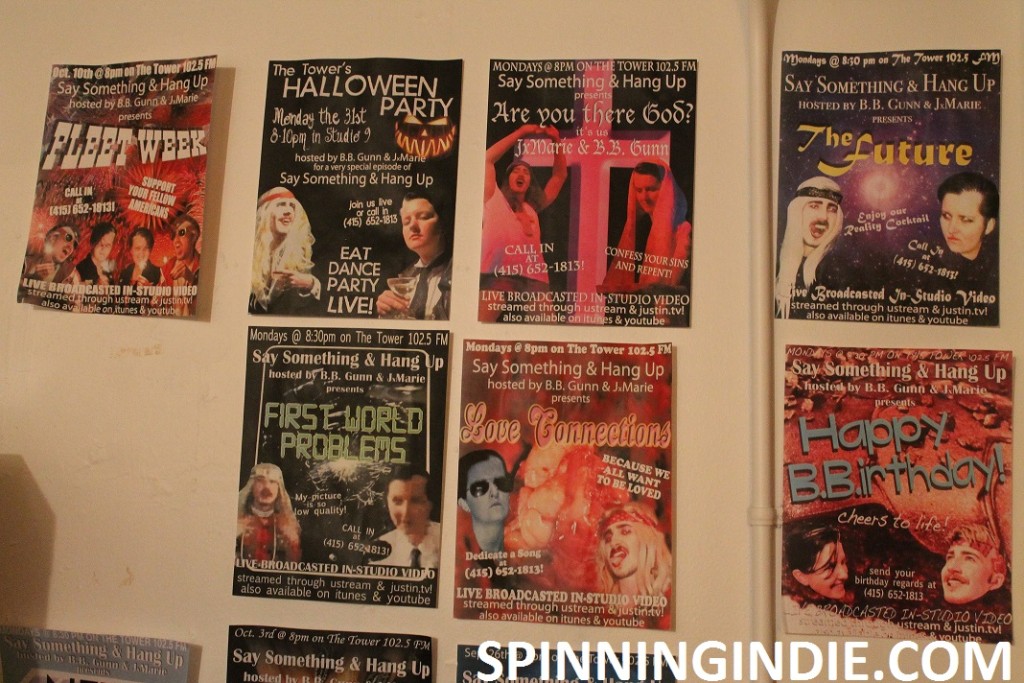 I was happy to hear that Tower Radio DJs and staffers regularly connect with local bands and with other local college radio stations. Verdin said that a lot of the folks at the station have friends at University of San Francisco (USF)’s streaming college radio station KUSF.org and told me, “we hang with them every weekend.” When I asked why that was, he said that there are a lot of students from Southern California at both the SFAI and at USF, so people have gotten to know each other through high school connections. 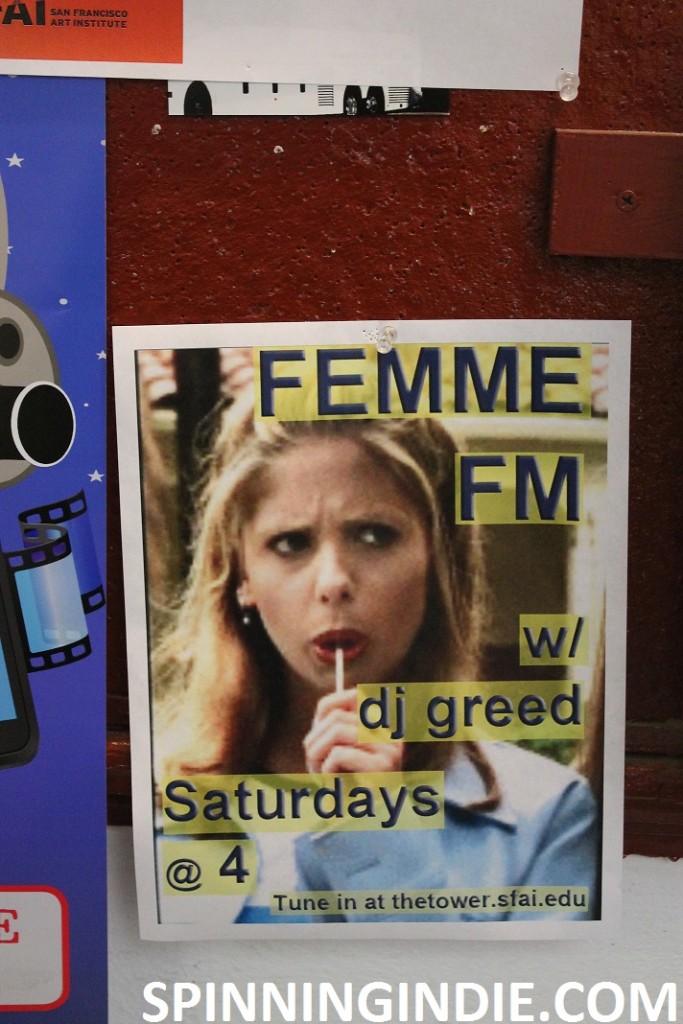 Verdin said that it’s nice to be able to connect with their fellow college radio stations. He alluded to KUSF’s lost FM signal and said, “What if we can just help each other?” He said that often the two stations will let each other know if bands are in town and are looking to stop by. Verdi told me, “If we can’t have a band on a certain day,” then he’ll tell them to go to USF. He added, “It’s nice to have friends.”

As we talked a bit about KUSF’s loss of FM, Rhodes joked about the station’s pirate past, saying, “We have the punk rock version of that story,” and added that Tower Radio used to have an antenna too.

Thanks so much to Renee Rhodes and Pedro Verdin for showing me around The Tower and also thanks to Julio Morales for filling me in on the back story about the origins of The Tower. This is my 76th radio station field trip report. See my most recent field trips on Radio Survivor and see all of my station field trips on Spinning Indie. I’m looking forward to more radio station visits in 2015, with my next stop in Kentucky.