A few years back I was lucky to get a glimpse into the world of student radio in Ireland. After visiting few stations there and learning a bit about the country’s college radio culture, I am happy to hear that student broadcasters will be convening in Ireland this week. The National Student Radio Conference will take place in Galway, Ireland today and tomorrow. Ireland’s first national student radio conference is being hosted by National University Ireland (NUI) Galway’s RadioSoc along with NUI Galway student radio station FlirtFM. Sessions and talks will focus on student radio and radio more broadly, including theoretical, practical and more general topics.

In other college radio news:

The college radio station finalists for this year’s mtvU College Radio Woodie Award are the subject of episode 41 of the Radio Stuff Podcast. Tune in to hear snippets from the competing stations and commentary about the contest. As you can imagine, many of the college radio stations up for this year’s College Radio Woodie award are rallying listeners and students in order to achieve the most votes. WESS at East Stroudsburg University planned to hold a vote-a-thon yesterday and also installed voting booths on campus. WCRD at Ball State University is also hoping to win the contest and made use of social media in order to make it to the finals. Yesterday was the last day to vote and the winning station will be announced at SXSW on March 16. 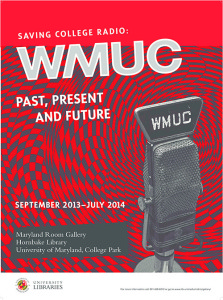 University of Maryland to Host College Radio Symposium on April 11

I’m excited to be presenting at the all-day “Saving College Radio” symposium at University of Maryland on Friday, April 11th. The event is open to the public and is being held in conjunction with the Saving College Radio: WMUC Past, Present, and Future exhibit celebrating the long history of WMUC and student radio at the College Park, Maryland campus. Hosted by the University of Maryland Libraries’ Special Collections, the symposium will feature presentations by academics, archivists and college radio participants. “Presenters will highlight the vital contributions of college radio to campus, local and online communities, and emphasize the value of college radio archival materials in history and scholarship.”

Acknowledging the changing radio landscape, University of Connecticut’s student radio station WHUS has made changes to its schedule, beefed up its web offerings, and has launched a show focused on new music. According to the Courant, “Last fall, the student-led Operations Board of WHUS decided to reorganize its programming generally in a ‘block scheduling’ format that provides more consistency throughout the listening day by grouping similar genres of music and news-information shows during specific hours of the day.”

WXUT DJ Hugh Ross hosts “The H-Factor” on the University of Toledo radio station. The Toledo Free Press reports that he “…is hoping to help revitalize Toledo’s once-thriving jazz community” by “…working to line up more public appearances to expose jazz to people of all ages” with a weekly DJ event at a local venue.

This week a historical marker was placed on the former site of Tyler Commercial College in Tyler, Texas. Although the school offered coursework in many fields of study, it’s notable that it began teaching radio telegraphy and radio telephony courses in the 1920s.

Named after 19th century inventor Nathan B. Stubblefield, the Stubblefield Society is a fundraising arm of Wichita State University’s public radio station KMUW. Geared towards students, the nearly 300-member society provides benefits like free admission to local museums as well as promotional materials from the station.  Although the Wichita State station isn’t a student-run radio station, it’s interesting to see how it is engaging students through its fundraising efforts.

University of Massachusetts, Amherst radio station WMUA-FM is hoping to cover the upcoming NCAA basketball tournament, but needs additional funding in order to do the live broadcasts. According to its Indie GoGo fundraising page, “In just a few weeks the UMass Men’s Basketball team will be playing in the NCAA Tournament for the first time in nearly 20 years. Covering this event would be a great opportunity for not just us as students, but for our station and its listeners as a whole.” In the campaign, WMUA is seeking at least $1000 to offset travel costs.