By Jennifer Waits on November 22, 2013 in College Radio, History, news 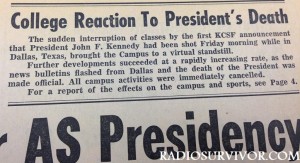 As people are reflecting back on the assassination of President John F. Kennedy 50 years ago today, many of them may remember hearing the news over the radio. College radio stations were among the media outlets breaking the news on this tragic day in history.

The WMUC archives actually contain audio from the University of Maryland’s news broadcast announcing the horrible news that the President was shot. Within that broadcast is a minute of silence, which is chilling to listen to 50 years later.

This WMUC audio was brought to light during the preparation of the Saving College Radio: WMUC Past, Present, and Future exhibit at University of Maryland. According to an accompanying article today on the University of Maryland Archives blog, radio students learned of the news while in class and then raced to the radio station in order to broadcast the news. The article states,

“Remarkably just last week the recording of Batten’s stunning announcement that the President was dead was discovered among the 1,800 audio reels in the WMUC Collection in the University Archives.  Batten’s pronouncement is followed by snippets of the NBC feed he references above, then by an excerpt of student reporter Richard Sher interviewing a fellow student about her reaction to the news.”

, Brooks writes about how student broadcasters dealt with the news:

“I was on the air, hosting the Swingalong program, whose format called for gradually increasing the tempo from softer to louder rock ‘n’ roll, to lead into Swinghouse. Suddenly, at approximately 1:40 p.m., the UPI teletype started ringing with the first bulletin that shots had been fired at the presidential motorcade in Dallas, Texas.

A newsman rushed in to read the bulletin, then said ‘back to you’ as he ran out to find News Director Jeff Panitt ’65, who was in class. We immediately started interrupting the show with bulletins as they came in, but during the next hour there was considerable confusion about the president’s condition.

We all instinctively knew that, until we found out what was going on, it would [be] better to keep the music toned down. WDCR was one of the most listened-to stations in the area, and there was little television reception, so thousands would be tuning in to find out what was happening.

By the time the dreaded bulletin came across the wire at approximately 2:35 p.m. that the president was dead, the News Department had mobilized. Some found an LP of Beethoven’s doleful Missa Solemnis to put on the turntable in place of Lesley Gore and Rick Nelson, and all regular programming was suspended.”

City College of San Francisco’s campus-only radio station KCSF also jumped into action to spread the word to the campus community. According to a report in the November 27, 1963 student newspaper The Guardsman, “KCSF, the college’s radio station, interrupted all scheduled classes at 10:54 a.m….with the broadcast that President Kennedy had been shot…At approximately 11:15 a.m. KCSF returned to the air and stated that an unofficial communique from the Texas hospital revealed that President Kennedy’s wound had proved fatal. He allegedly was shot in the head with an Italian-made 6.5 mm Carcano rifle. The effect at City College was immediate and widespread.” The President of City College cancelled classes for the next day.

If you were in college in 1963, do you remember hearing news about the Kennedy assassination over your campus station?