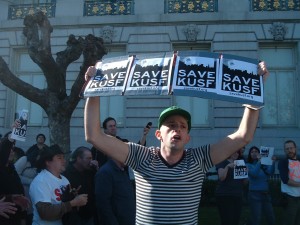 Nearly 17 months after University of San Francisco (USF)’s college radio station KUSF was shut down without warning, the FCC has granted the KUSF license to Classical Public Radio Network (CPRN).

For those who have been fighting this sale for all this time, there might be some comfort in the fact that the FCC has found USF and CPRN (a group that is 90% owned by University of Southern California and 10% owned by Public Radio Capital) in violation of FCC rules and is asking that they pay $50,000 for misdeeds in relation to the station transfer.

In a letter dated today, the FCC informed the lawyers for Friends of KUSF that in response to various complaints, objections, and Petitions to Deny submitted by the community, an investigation into the proposed sale of KUSF was launched. Today, the FCC reached a conclusion. The letter states:

“Our investigation culminated in the attached Consent Decree with the University of San Francisco and Classical Public Radio Network LLC (the ‘Applicants’). The Consent Decree includes stipulations that the Applicants violated Sections 1.17 and 73.503(c) of the Commission’s Rules, 47 C.F.R. § 1.17, 73.503(c), requires the Applicants to make a voluntary payment of $50,000 to the United States Treasury, and finds that the Applicants are legally qualified to hold authorizations issued by the Commission. In light of this Consent Decree resolving the matter, we have concluded that the public interest, convenience, and necessity will be served by a grant of the referenced application. Accordingly, we are denying your Petitions to Deny, informal objections, and all responsive and supplemental filings opposing the grant of the referenced application.”

The FCC is ordering that USF and CPRN pay a total of $50,000 because of FCC violations in relation to fees paid to USF in exchange for allowing CPRN to air classical music programming from KDFC over the non-commercial radio station KUSF 90.3 FM. The letter states, “The Consent Decree stipulates that both USF and CPRN violated Section 1.17 of the Rules and that USF violated Section 73.503(c) of the Rules, and provides, among other things, that USF and CPRN will collectively make a $50,000 voluntary contribution to the United States Treasury.”

Despite the FCC’s finding that violations occurred, it was concluded that based on the facts presented, “nothing in that record creates a substantial or material question of fact whether either USF or CPRN possesses the basic qualifications to be a Commission licensee.”

In its Consent Decree (dated today, although signed by officials from USF and USC nearly a month ago), the FCC found that the original Public Service Operating Agreement (PSOA) that USF and CPRN entered into was in violation of FCC rules. In that agreement, CPRN agreed to pay USF a monthly fee in exchange for the right to air their programming over KUSF 90.3 FM while awaiting an FCC decision on the license transfer. The fees between January and June, 2011 totaled nearly $48,000. According to the Consent Decree,

“…USF and CPRN did not point out any instance in which the Bureau or the Commission issued a decision in which it considered and found such payment terms to be compliant with Section 73.503(c) of the Rules, because no such decision exists. In light of the foregoing, the Bureau finds that the terms of the PSOA as originally submitted violated Section 73.503(c) and that the certifications by USF and CPRN that the PSOA complied with the Commission’s Rules and policies were incorrect.”

This entire investigation into the KUSF PSOA has important implications for other non-commercial radio stations who enter into these types of deals. A statement from the FCC Media Bureau Chief William T. Lake today states,

“…The violations addressed in the Consent Decree involve two serious matters:  (1) monthly payments for program time, in violation of 47 C.F.R. § 73.503(c) (which forbids such payments to NCE radio stations unless they are limited to reimbursement of operating expenses); and (2) the parties’ unintentionally false certifications that the transaction complied with the Commission’s rules and policies.”

Lake goes on to point out that in this PSOA, “…the licensee agreed to allow the programmer to provide substantially all of the programming for the station in return for a monthly payment that exceeded the station’s expenses.” Even though USF and CPRN were candid about this payment and it was a common practice in other similar agreements, the FCC has found that it is in violation of their rules. Lake explains,

“The point of the rule is straightforward:  it prevents NCE radio stations from selling program time at a profit… I hope that our Consent Decree in this case will remind NCE licensees that they cannot monetize their licenses by selling program time for a profit.  I do wish to note that the relevant rules only apply to payments for program time and do not limit the ability of NCE stations to enter into other types of contracts such as a sale agreement, an option to buy or sell a station, a right of first refusal to buy a station, etc.”

Classical music programming from KDFC began airing over KUSF 90.3 FM just a few hours after the station’s college radio/community format was discontinued on January 18, 2011. In a complicated series of transactions, the formerly commercial classical station KDFC left its spot on the dial in January, 2011 so that its owner, Entercom, could replace classical programming with a simulcast of a rock music station. The KDFC brand was transferred to CPRN and CPRN entered into agreements to purchase KUSF 90.3 FM and KNDL 89.9 FM (a religious station north of San Francisco in Angwin, CA). The deal to purchase KNDL was finalized without protest and upon consummation that station’s call letters were changed to KDFC.

The KUSF transaction didn’t go as smoothly, as fans of the long-time college radio powerhouse launched vocal protests against the sale. Their efforts led to a formal investigation by the FCC in June, 2011, when the FCC sent a letter of inquiry to USF and CPRN regarding the deal and the public service operating agreement which was set up to allow CPRN to utilize the KUSF signal before the license transfer was finalized.

In the meantime, fans of the old commercial KDFC were frustrated that the new, non-commercial KDFC could only be heard in San Francisco on 90.3 and north of San Francisco on 89.9 FM. In response, the new KDFC promised that it would work tirelessly in order to secure a signal that reached south of San Francisco. By the end of 2011, CPRN had entered into an agreement to purchase a Los Gatos translator in order to slightly expand coverage into the South Bay. In the past week, KDFC announced that with the purchase of commercial station KCNL (licensed to Sunnyvale, CA), a South Bay signal for KDFC fans would be available by June 15. USC’s purchase of KCNL (now KXSC) was finalized this week.

For USF, CPRN, and USC, this is all great news, especially since the FCC is has stated that as part of the Consent Decree, the Media Bureau “agrees to terminate its Investigation into the Violations” and will not “institute any new proceeding, formal or informal, or take any action on its own motion against USF or CPRN concerning the matters that were the subject of the Investigation.”

“We are enormously pleased that we have resolved our issues with the FCC and have completed the transfer of KUSF to the Classical Public Radio Network.  We look forward to providing classical music and other quality public service arts programming to the Bay Area for years to come.

We begin our membership drive tomorrow and we will launch the South Bay station officially 6/15 at 7:00 p.m. at the conclusion of the drive.  With the three stations we own KDFC will once again have a full market signal.  There will be pockets where listeners cannot hear it as well but there are also many locations where we are offering better coverage.”

I’m awaiting word from the lawyers from Friends of KUSF to hear if this is truly the end of the fight. It’s been a long road for those who miss the KUSF of old. Many former KUSF DJs have been continuing the tradition of the college/community-oriented station at the online-only KUSF in Exile, whose stream is being hosted by New Jersey freeform community radio station WFMU.