By Jennifer Waits on March 9, 2012 in Religious Radio, Uncategorized 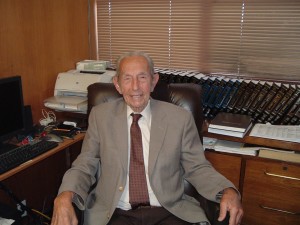 I first became obsessed with Harold Camping and Family Radio nearly a year ago when I heard Camping’s bold statements about the impending rapture and end of the world. Part of what made his radio broadcasts so compelling was that he expressed his beliefs with absolute certainty. When callers to his “Open Forum” talk show had questions and critiques about his predicted May 21, 2011 date for the rapture, Camping was steadfast and at times combative, as he held firm to the idea that 6pm “local time” would herald the beginning of the end on May 21 and that the destruction of the world would occur on October 21, 2011. Since neither of those dates panned out, Camping has softened his initial stance on Judgment Day, releasing several statements, including a claim that Judgment Day was spiritual rather than physical. By November his thinking about the rapture had evolved even further and he even offered listeners a vague apology.

Camping’s latest, and strongest, statement was just posted on the Family Radio website this week. It will also be mailed out to Family Radio listeners. In it, Camping admits that he was wrong to have predicted a date for Judgment Day in the first place. He says:

“…Events within the last year have proven that no man can be fully trusted. Even the most sincere and zealous of us can be mistaken. The May 21 campaign was an astounding event if you think about its impact upon this world. There is no question that millions, if not billions of people heard for the first time the Bible’s warning that Jesus Christ will return. Huge portions of this world that had never read or seen a Bible heard the message the Christ Jesus is coming to rapture His people and destroy this natural world.

Yes, we humbly acknowledge we were wrong about the timing; yet though we were wrong God is still using the May 21 warning in a very mighty way. In the months following May 21 the Bible has, in some ways, come out from under the shadows and is now being discussed by all kinds of people who never before paid any attention to the Bible.”

As he has stated previously, Camping argues that Family Radio’s pre-May 21 media blitz has led to an increased awareness of the Bible. He says, “We learn about this, for example, by the recent National Geographic articles concerning the King James Bible and the Apostles. Reading about and even discussing about the Bible can never be a bad thing, even if the Bible’s authenticity is questioned or ridiculed. The world’s attention has been called to the Bible.”

He goes on to say that he does not have a new date in mind for the end of the world and says that “Family Radio has no interest in even considering another date. God has humbled us through the events of May 21, to continue to even more fervently search the Scriptures (the Bible), not to find dates, but to be more faithful in our understanding.”

Considering how certain Camping was of the May 21 date initially, it’s amazing to see that he now admits that nay-sayers, who argued that people cannot know the date of the end of the world, were actually correct. He states, “We humbly recognize that God may not tell His people the date when Christ will return, any more than He tells anyone the date they will die physically…we now realize that those people who were calling our attention to the Bible’s statement that ‘of that day and hour knoweth no man’, were right in their understanding of those verses and Family Radio was wrong.”

Camping also admits that he made “sinful” statements by insisting that “Christ would return on May 21,” but seems to argue that the end justified the means since these bold claims “allowed God to get the attention of a great many people who otherwise would not have paid attention.” Camping then offers an apology, saying, “However, even so, that does not excuse us. We tremble before God as we humbly ask Him for forgiveness for making that sinful statement. We are so thankful that God is so loving that He will forgive even this sin.”

It appears that Family Radio will continue with its regular programming from here on out. As we noted recently, they are also in the midst of selling off a few of their radio stations across the country. Just this week the FCC approved Family Radio’s application to assign the license for WKDN in Camden, New Jersey to Merlin Media. The sale price was $22.5 million.