By Paul Riismandel on February 26, 2012 in Commercial Radio, Politics 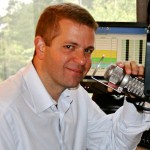 Last week I reported on conservative Houston talk radio host Michael Berry who was accused of committing a hit-and-run damaging a bouncer’s car while leaving a local gay bar. While he has not admitted any guilt in the matter, on Thursday Berry offered $2000 to the aggrieved bouncer, Tuderia Bennett, in order to cover damages. A letter from Berry’s attorney states,

“I wanted to make you aware that from the very beginning of HPD’s investigation, Mr. Berry made it known to HPD that if they were of the opinion that he caused damage to your car, Mr. Berry wanted to make it right with you.”

Berry’s decision to offer compensation to Bennett comes after reports that Houston Police were re-examining the case in which they initially decided not to pursue further investigation or charges against Berry. Bennet identified Berry as the man who hit his car, and video surveillance footage confirmed that Berry was inside the bar that same night.

For his part Berry does not deny being at the bar, and on his program challenged the assertion that he is anti-gay, saying “I have never hated gay people; in fact, I’ve gone the exact opposite direction.” He also said that he went to the bar in question because “there was a cold beer waiting inside,” and it was somewhere he knew he wouldn’t be recognized.

Bennet told KPRC-TV that since receiving the check from Berry he is no longer interested in pressing charges. He says that, “I’m just going to tell them let’s let sleeping dogs lie.”

That probably means the end of this embarrassing ordeal for Berry. Though I wonder if the episode didn’t result in a brief ratings boost, as folks tuned in to see if he would address the charges on air. I think the lesson here is that it’s better to fess up right away to a hit-and-run, rather than try and dodge it, especially if you’re even minor radio celebrity.