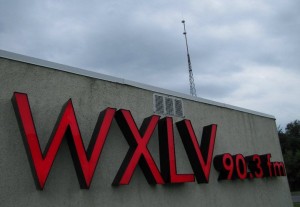 Today a rally was held on the campus of Lehigh Carbon Community College in Schnecksville, Pennsylvania in order to raise awareness about the potential sell-off of the college radio station WXLV 90.3 FM.

According to an article in the South Whitehall Patch, the administration recently had the station appraised as part of their process of evaluating ways to cut costs on campus. Although the university has not made a final decision about selling the station, they have already learned that a public radio station and Christian radio broadcasters are interested in buying the FM frequency. The article states:

“The college is in a mode of belt-tightening, given a 10 percent cut in the state budget for community colleges currently on the table. That would translate to a $1.3 million reduction in LCCC’s annual budget, [LCCC’s Associate dean for institutional advancement Heather L.]  Kuhns said. And that would come after three years during which the state’s allocation to community colleges had been frozen in place.

The decision whether to sell or keep the radio station will have to come from the trustees, Kuhns said. If they do make that decision, the process of determining the buyer and sale price would be a public one, Kuhns said.”

In addition to today’s rally, WXLV supporters have also created an online petition and the Facebook group Save Your Radio, 90. 3 WXLV Up for Sale. In their online petition, WXLV fans argue that:

“WXLV is the biggest community force within LCCC and fosters a large community of over a hundred volunteers and thousands of supporters. These people are donating innumerable hours of time to kindle this fire. It would be a great loss to the community and reputation of LCCC to put out this passionate blaze.”

So far, more than 1000 people have signed WXLV’s online petition. The license holder for the station is the Lehigh Carbon Community College Board of Trustees, so much of the current effort is meant to convince board members that the station is worth preserving.

No doubt the volunteers at WXLV will also want to take a look at similar efforts by those who have fought to save KTRU, KUSF, and WRVU. And, as this once again calls attention to the current threat to college radio, here are a few Radio Survivor resources for people fighting a station sale:

Media Geek’s Advice for College Stations Part 1: Be True to Your School

What I would do to Save KPFA, by Brian Edwards-Tiekert
Family Radio’s Rapture Fallout Prompts Letters to FCC and Congress
Support Radio Survivor on Patreon!