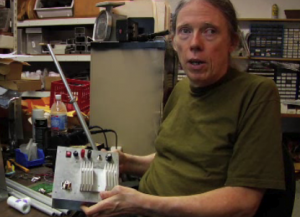 Stephen Dunifer in the FRB shop

Although Free Radio Berkeley has not been an operational radio station for over a decade, founder Stephen Dunifer continues to champion the cause of unlicensed micropower radio. In this spirit FRB just announced its 2011 schedule of summer radio camps. Each camp is a four-day workshop where participants learn to build a 10- or 40-watt transmitter and put together a low-power FM broadcast station.

The workshops are priced ridiculously reasonably at a sliding scale of $150 – $200. The cost of the transmitter kit is additional, with the 10 watter priced at $225 and the 40 at $350. Participants are also responsible for finding their own housing, but a PDF information packet provides some guidance.

Anyone attending an FRB radio camp should keep in mind that these transmitters are not suitable for use by a licensed station, and are instead intended to be used unlicensed. Dunifer considers unlicensed broadcasting to be an act of electronic civil disobedience, as he explains in this essay he wrote in 2008. We frequently report on unlicensed broadcasting here at Radio Survivor, and so want our readers to be clear that the FCC and federal government still frown on it. However laws and enforcement vary greatly in other countries, and in many places and struggles unlicensed stations provide essential information lifelines that otherwise wouldn’t exist.

Even in the US the risk of criminal penalties is very slight in the 48 states that aren’t New Jersey or Florida, with the latter being the only state where actual arrests have been reported. I don’t add this caution in order to scare people off. Rather, having followed the FCC’s enforcement of unlicensed broadcasting for more than a decade, it appears that many of the folks who receive notices of apparent liability seem to have expressed quite a bit naïveté about the legal status of their endeavor, not even realizing that the FCC might take notice. Simply, it’s good to be informed and thoughtful. Anyone thinking about starting an unlicensed station should do some research and weigh the risks and benefits. And I’m sure Mr. Dunifer would be glad to answer participants’ questions about this aspect.

How To Make a Radio Station from Free Radio on Vimeo.