By Jennifer Waits on June 6, 2011 in College Radio 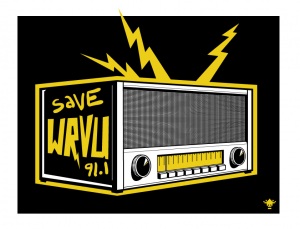 It can’t be a good sign when a college radio station that’s rumored to be for sale secretly changes its call letters during summer break.

Well, that’s what happened on June 1 to Vanderbilt University’s student radio station WRVU, according to a report on CMJ today.

FCC records indicate that on June 1, 2011 the call letters WRVU were changed to WFCL. According to interim President of WRVU Friends and Family, Sharon Scott, this change to the station’s call letters had not been communicated to on-air staff at WRVU, who have continued to promote and announce the station as WRVU.

It’s easy to speculate from this that the owners of the WRVU license, Vanderbilt Student Communications, are in the process of selling the station. My guess would be that they are changing the call letters because they plan to retain the name WRVU for an online-only station.

The secretive nature of the call sign change is yet another reason to be skeptical of the motives of Vanderbilt Student Communications. You might remember that this same group allegedly reserved the URL “SaveWRVU” just before announcing that they were contemplating selling the station back in September 2010; which on the surface smacked of an attempt to silence potential protests.

Clearly they have not managed to stop the stream of complaints against a station sale.

According to today’s article on CMJ:

“WRVU alumni, staff members and supporters have been vocally opposed to a sale of its broadcasting license. The Pledge Nothing campaign has urged Vanderbilt donors to pledge lengthy suspensions of donations to the university until plans to sell the license are abandoned. Most recently, WRVU general manager Robert Ackley pledged to eschew donating for eight years. Alumni speaking out in opposition include CNN anchor Richard Quest and Facebook’s vice president of technology, Jeff Rothschild, both former managers at WRVU. Public Enemy’s Chuck D also came out publicly to support WRVU during Record Store Day, joining artists such as 10,000 Maniacs and Jason And The Scorchers.”

Announcements from WRVU and from Vanderbilt Student Communication are sure to come in the next few days. In the meantime, Save WRVU and the non-profit WRVU Friends and Family should continue to provide details about how to communicate displeasure with the potential loss of yet another terrestrial college radio station.