A little over a week ago, I got back from a radio-filled trip to Virginia, which included a stay in Charlottesville for the College Radio: Then, Now, and Next symposium and visits to nine radio stations throughout the state. Before heading to the airport, I trekked to a couple of radio stations, starting off with a tour of community radio station Richmond Independent Radio (aka WRIR-LP) in Richmond, Virginia. Arriving a bit early for my scheduled appointment, I buzzed the station and made my way up a long flight of stairs to its upstairs home. 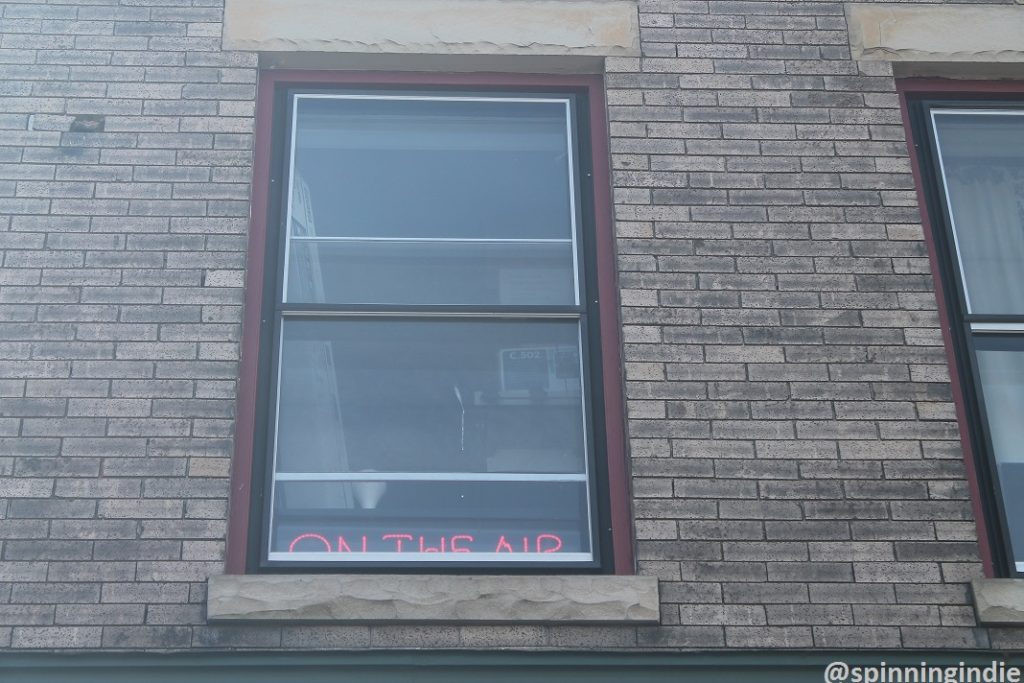 On my drive, I’d been enjoying the British Breakfast Show, and when I poked my head into the on-air studio, introduced myself to the hosts. In the midst of a shoegaze-themed show that Saturday morning, DJs Gene Pembleton and Carmen Collected cheerfully welcomed me into their space. It turns out that Pembleton spoke the first words over WRIR-LP when the station launched. It was the first of many historical tidbits that I heard during my visit. 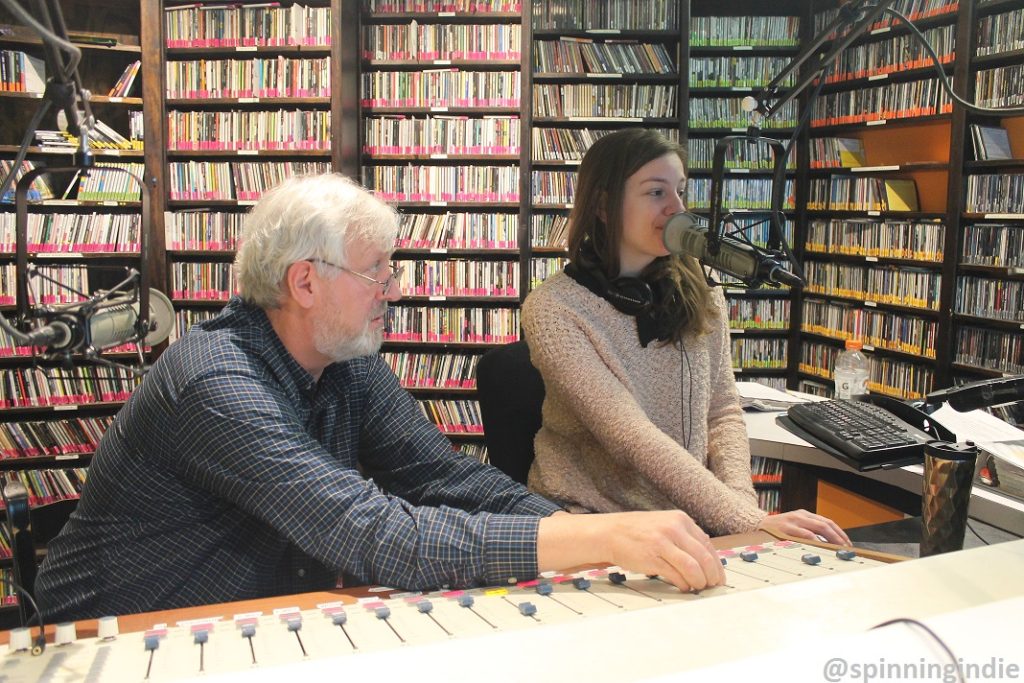 The emphasis of the British Breakfast Show is British music, but from week to week it can span across many decades and genres. For the March 18, 2017 show, Pembleton and Collected took turns selecting shoegaze music to play. The playlist included classic 1990s tracks from Lush, Slowdive, Ride, and more. While I snapped photos of the studio, Pembleton blasted My Bloody Valentine’s “Only Shallow” and reminisced about seeing the band and it being one of the loudest live shows that he’s ever seen. The next DJ arrived and several of us shared anecdotes about seeing My Bloody Valentine. 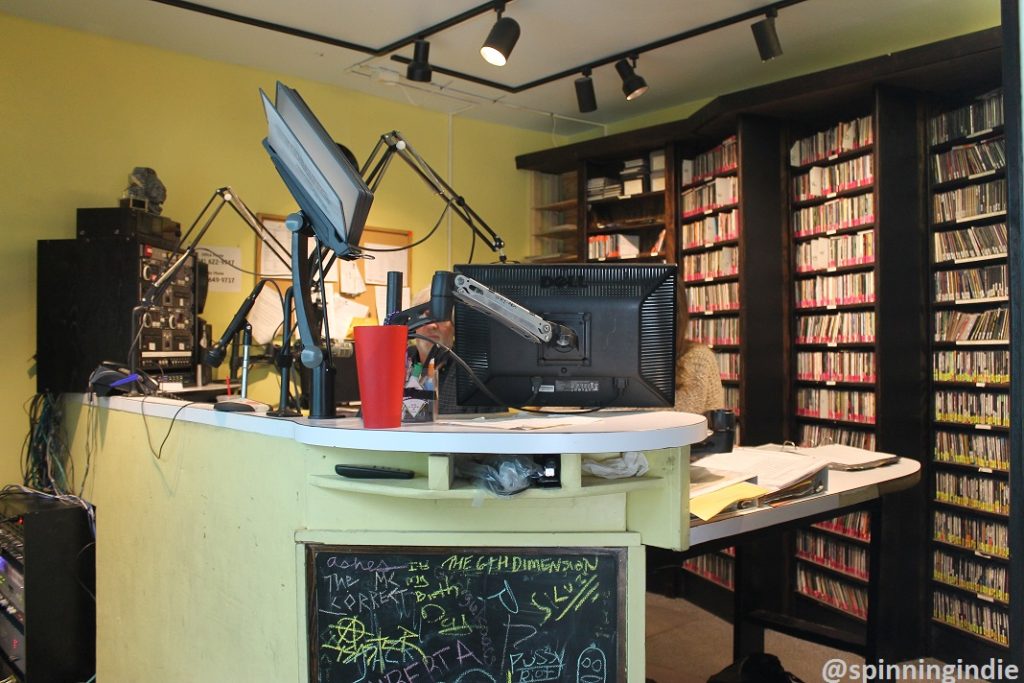 I left the studio to give room during the transition between shows and was greeted in the station’s kitchen (the station space is a former dwelling, complete with amenities like a bathroom and fireplaces) by Bill Lupoletti, who promptly introduced himself as a fellow Haverford College (and WHRC radio) alum. Amazed, but not surprised by the small world nature of radio, we began our tour and interview. 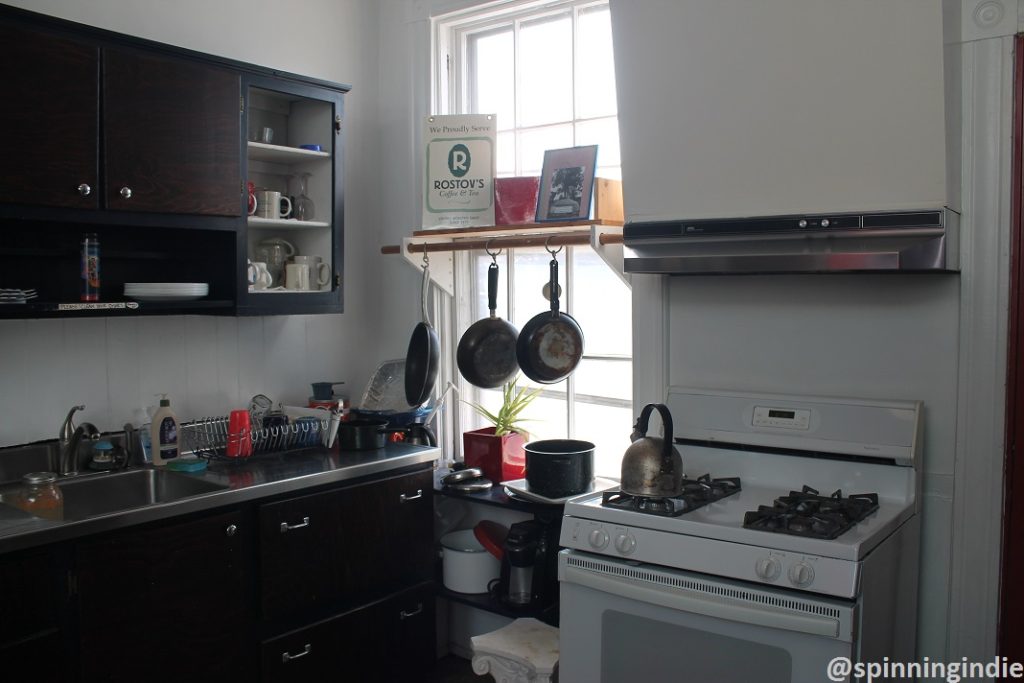 Lupoletti wears many hats at the station, serving on the board of its parent organization (Virginia Center for Public Press), working as WRIR’s Assistant Music Director for World Music and hosting the “Global A Go-Go” music show. At the station since 2004, he’s also full of stories about how WRIR-LP came to be. As we started our chat in a production studio, Music Director Anna Creech joined us as well. 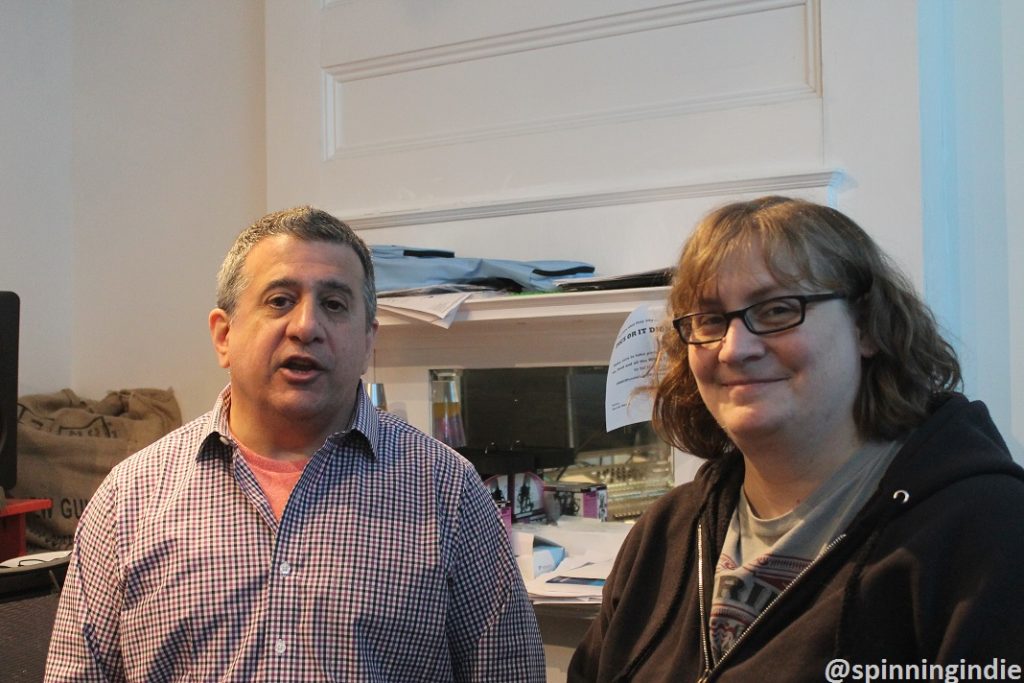 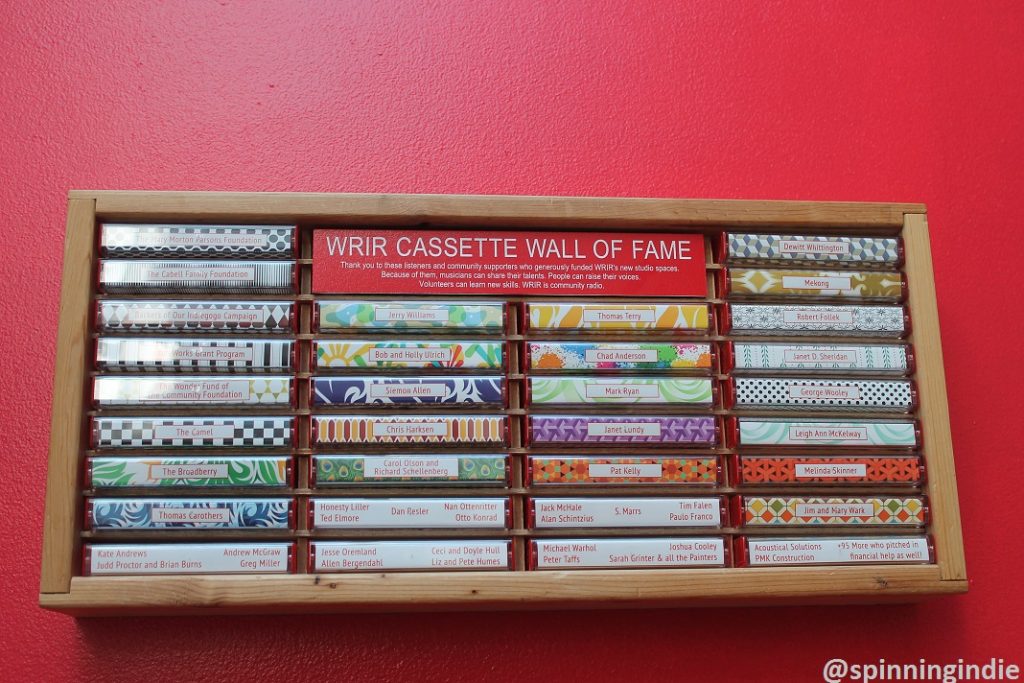 A low power FM (LPFM) station from the first licensing window, WRIR launched over 97.3 FM on January 1, 2005. Lupoletti recounted that Richmond was one of the largest cities to get a LPFM license and he told me that it was illuminating to realize just how under-served the Richmond radio market was at the time. A great storyteller, Lupoletti, shared the back story and the personalities who paved the way for WRIR’s debut on FM. 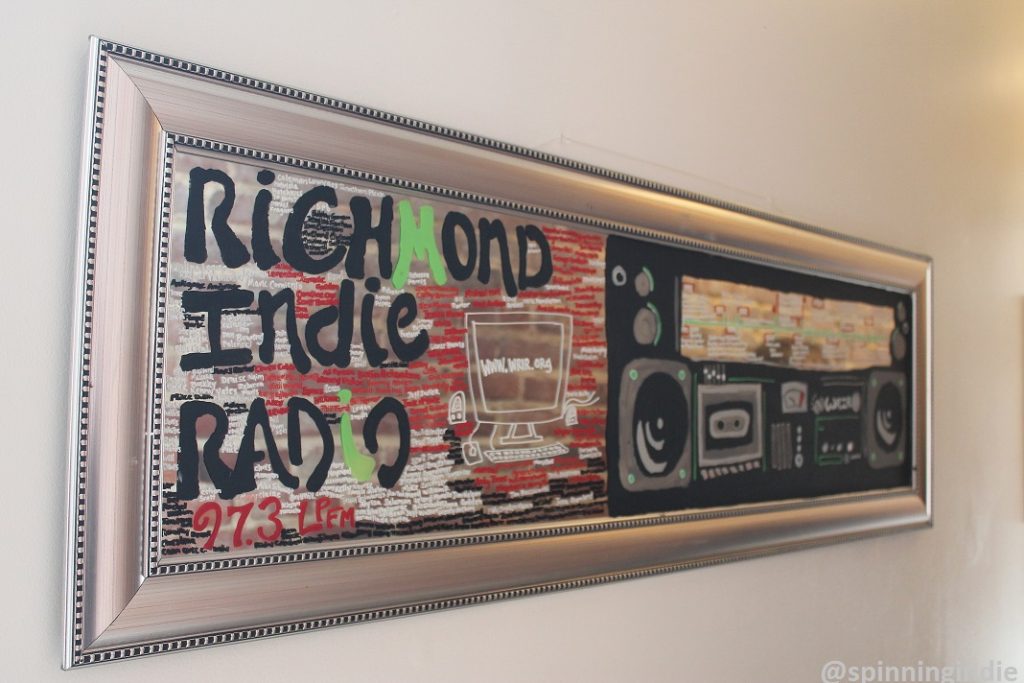 According to Lupoletti, the genesis of Richmond Independent Radio can be traced back to the Gulf War in 1991, when CNN broadcast news 24/7 and helped to spawn the public radio call-in show “Talk of the Nation.” Richmond station WCVE, which was primarily a classical music station, starting airing that show and began attracting an audience of listeners who were interested in news programming, although it stopped airing “Talk of the Nation” after six months. Richmond resident Chris Maxwell was upset by this turn of events and started a petition asking WCVE to bring back the show. Eventually he got a meeting with the station and after showing them a signed petition, WCVE management told him essentially, “if you’re so interested, why not start your own station?” Lupoletti said that at this point, Maxwell became a “one man media activist.” 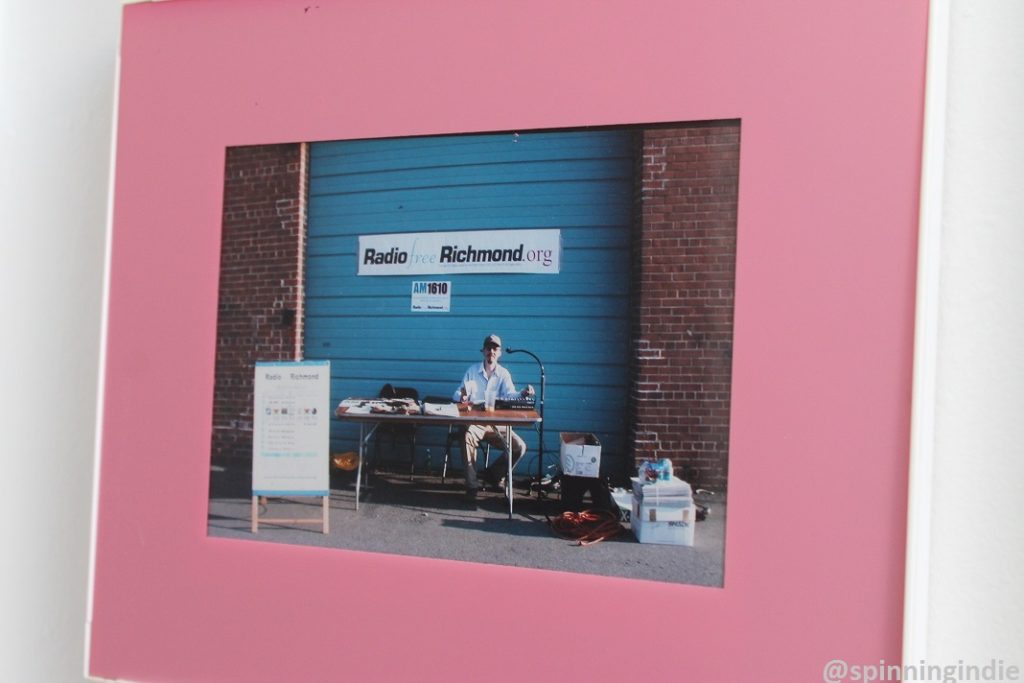 From gallery in WRIR-LP hallway. Photo of photo: J. Waits

The tale takes many twists and turns as other activists join the crusade for low power FM in Richmond. Alan Schintzius, whose family home was in the building that now houses WRIR, had dreams of opening a club (now The Camel, which is downstairs from WRIR) and helped with the efforts to petition for LPFM. While President of the Virginia Center for Public Press, he reached out to Richmond’s mayor (and future Virginia governor, senator and Vice-Presidential candidate) Tim Kaine, asking for a resolution in support of LPFM. Kaine was amenable and even penned the resolution himself. A piece on Richmond Indie Media adds that, “Timothy Kaine who had served on an FCC advisory committee crafted on his own one of the nation’s most influential City Council resolutions. The resolution for more competition by local voices on the FM radio band received unanimous city council support. When Maxwell attended the 2000 vote by the FCC in favor of LPFM, an FCC staffer came up to Maxwell and told him that the resolution by Richmond City Council really helped the FCC to stay the course and not allow the LPFM service to be further watered down.” 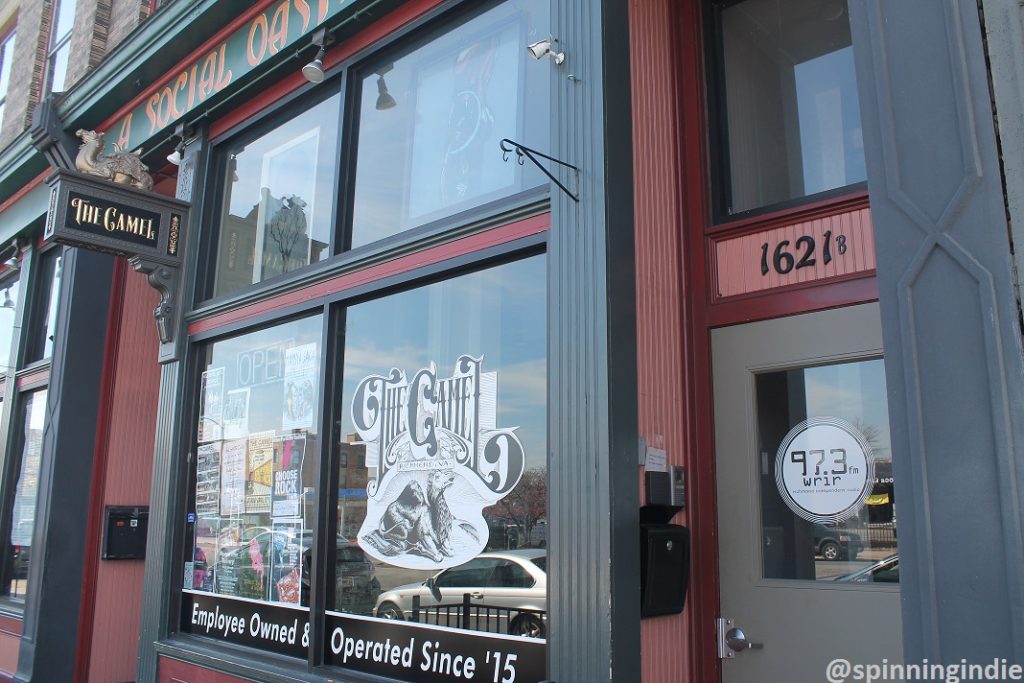 Additionally, others in Richmond were starting up independent radio stations, including Scott Burger, who brought one such station online. The many volunteers who helped to get WRIR-LP on the air include quite a few with radio pasts, including veterans of numerous college radio stations. Lupoletti began at Haverford College station WHRC and also was on the air at WHPK at University of Chicago. Even more fascinating to me was his time at Color Radio, a station that broadcast over cable TV in Richmond, beginning in 1982. Located on the color test bars channel (channel 36), the station was the brainchild of a group of former college radio DJs from Virginia Tech’s station WUVT. A number of future WRIR participants were involved with Color Radio, which was described as “better radio through television,” according to Lupoletti. 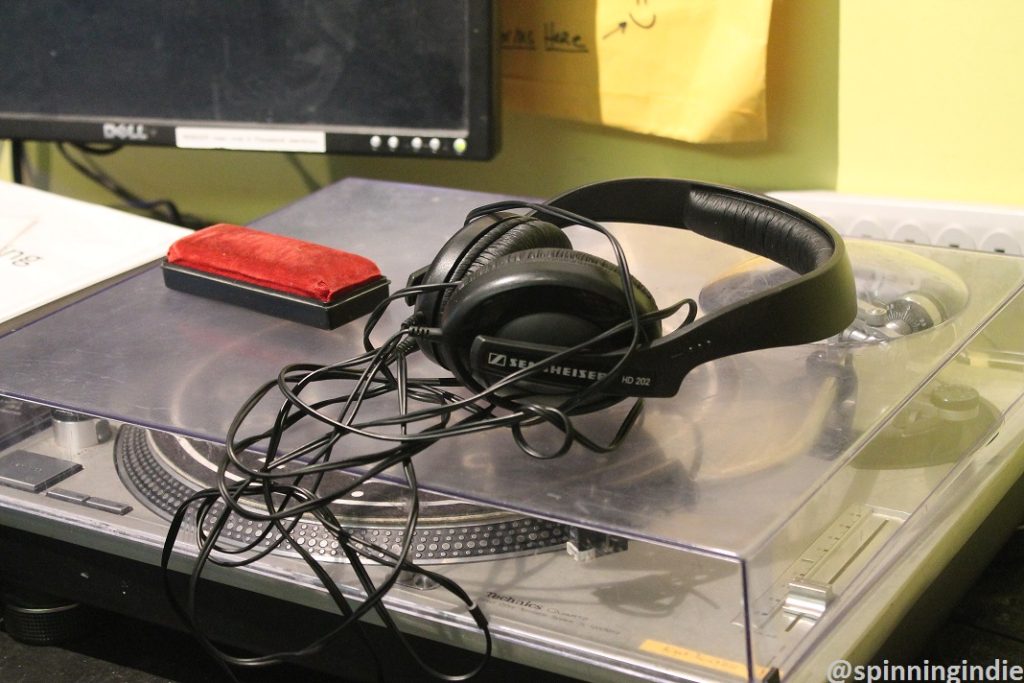 Music Director Anna Creech started doing college radio after college, with stints at University of Kentucky station WRFL (read my 2015 tour) and WXJM at James Madison University. When she got to Richmond around a decade ago, she saw WRIR tabling at an event and was drawn to the station, telling me that she was excited to be at a station with less turnover than at a typical college radio station. She started out as a late night DJ and then transitioned into the Music Director role after crates full of new music started piling up at the station. 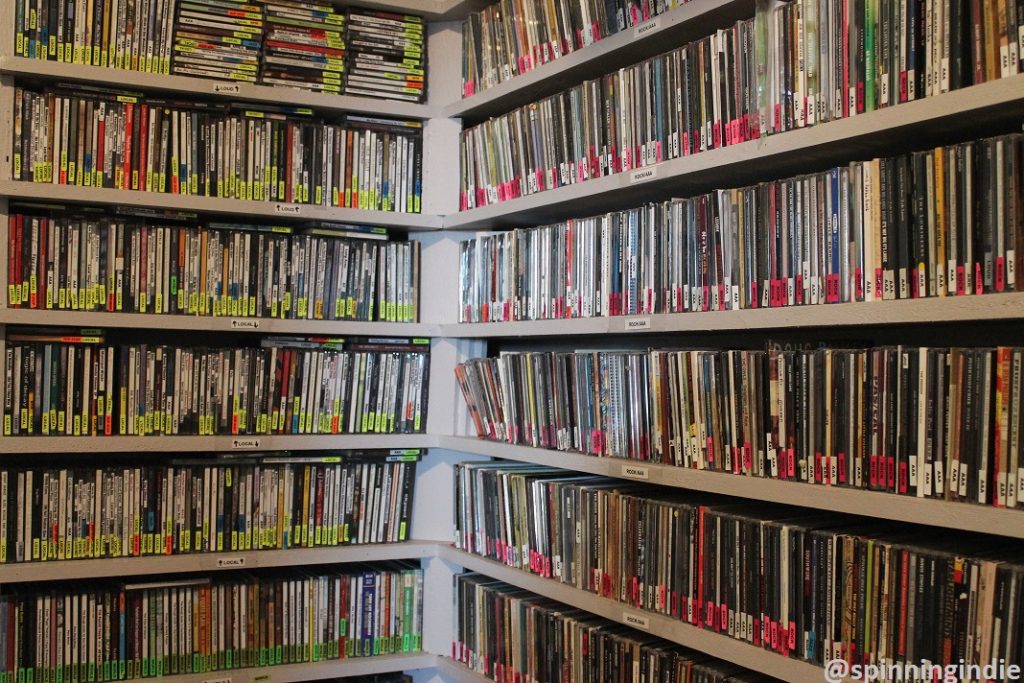 Creech explained that WRIR tries to focus on under-represented music, but DJs have the freedom to play what they’d like. Music shows are diverse, ranging from pre-1940s music to local bands to global music (Lupoletti had a 16-piece gamelan orchestra on his show the week before my visit). Creech said that in one week alone, tracks from more than 1200 different albums were played over the station, with maybe 100 of those from 2017. One DJ plays cassettes purchased at grocery stores in Brooklyn and also highlights YouTube stuff from Indonesia. There are some creative show concepts, including one with a rotating set of hosts called “Cause and Effect,” which on the day of my visit was focusing on music that influenced and was influenced by the band Vetiver. 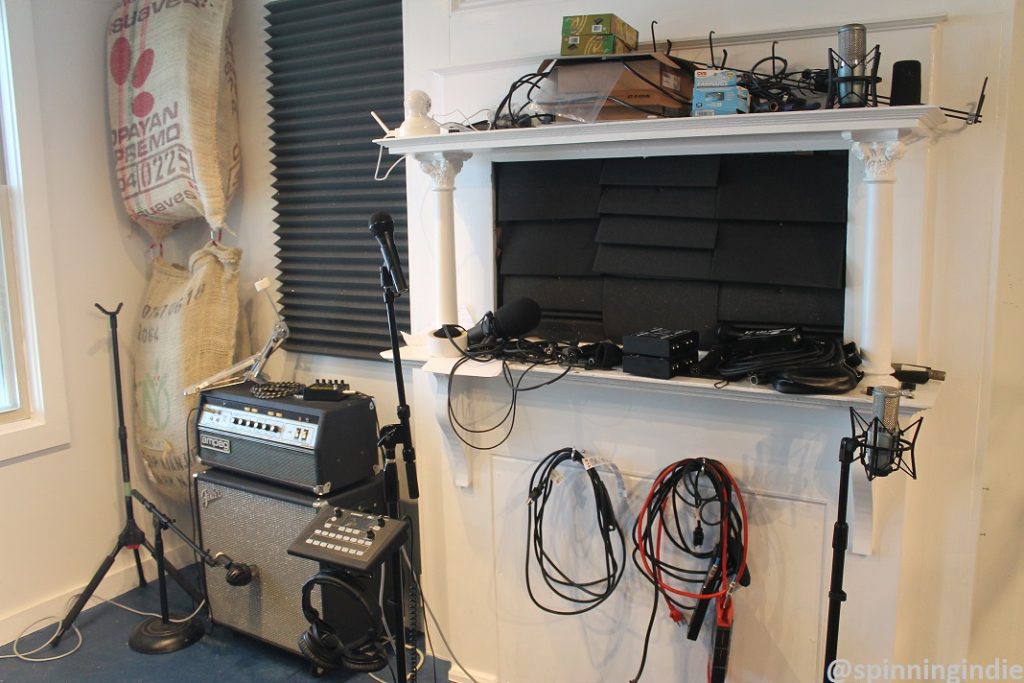 The station has a decent sized library of CDs, many of which are located in the on-air studio. Additional titles are housed in a back hallway. An even larger digital library is also available. Although there are some vinyl-only shows, WRIR doesn’t maintain a library of LPs and 7″s, largely due to lack of space. Public affairs and news are equally important at WRIR and the station has affiliations with PRI, PRX and Pacifica, airing a number of syndicated news and public affairs shows. Creech pointed out that the news and public affairs program has been “ramping up,” citing a Friday morning show featuring locally produced news and public affairs. WRIR also serves as the official radio station for emergency information in Richmond. 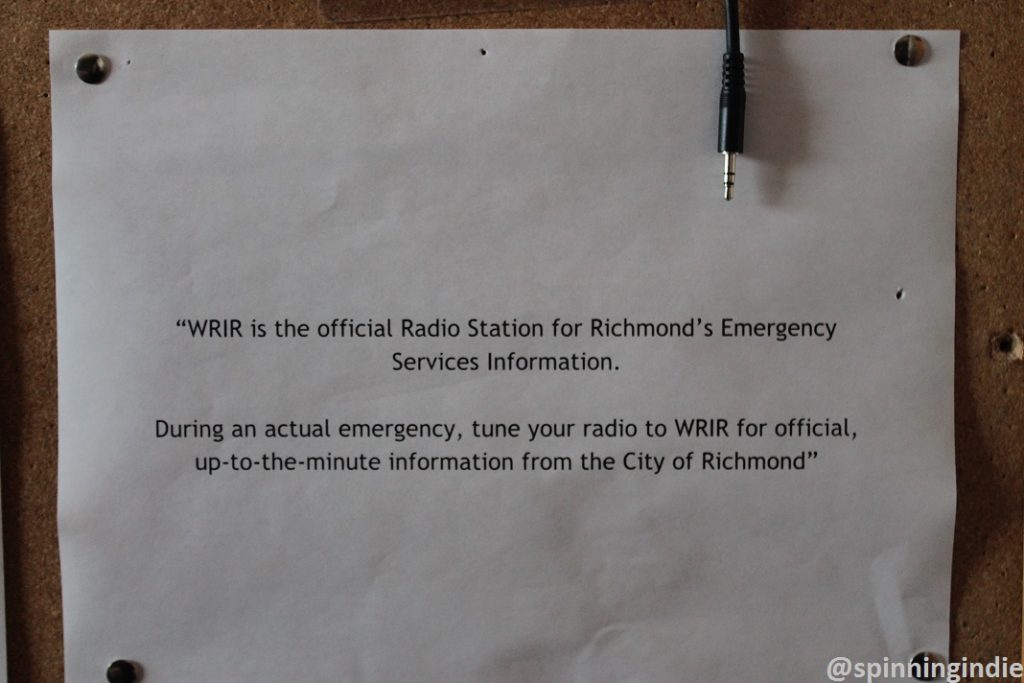 Thanks to Bill, Anna and everyone else at WRIR-LP for the wonderful Saturday morning visit. This is my 124th radio station field trip report, with more to come from not only my recent Virginia travels, but also my fall 2016 Philadelphia-area field trips. My most recent field trips can be found on Radio Survivor and a full list of all my station tour reports is compiled on Spinning Indie. You can hear more from my visit to WRIR, including audio from my interviews on Radio Survivor Podcast #88.