By Matthew Lasar on September 30, 2015 in Innovation, Internet radio 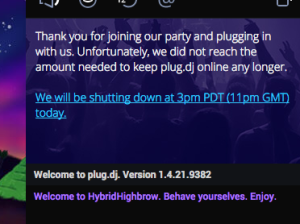 Shortly after the announcement that the turntable-style music sharing room plug.dj would cease operation, I wrote to the site’s founder, Jason Grunstra, for an analysis. “It really just comes down to money,” Grunstra responded.

“The development and hosting of a massive real-time application is no small feat. It’s incredibly complex and we just couldn’t find the right audience that was willing and/or able to pay for the service in the time we were allotted, given our expenses and our financial runway. At the end of the day it was money-in vs. money-out. Money-out won.”

Indeed, the real-time-ness (so to speak) of an application that hosts thousands of online interactive animated music rooms must be very challenging. Even we received complaints of too many plug.dj maintenance mode situations. But I’d also read that one of plug.dj’s biggest problems was that its audience was literally too young to monetarily support the site. I asked Grunstra about this. “To a certain extent, yes,” he responded:

There were quite a few people that wanted to chip-in to help keep us plugged-in, but simply could not because there are very few (if any) easily accessible payment options for younger people when it comes to online transactions. And while it can certainly be a challenge to convince someone who has enjoyed a service for free for so long to one day start paying for it, I do believe that a lot of them genuinely saw great value in the service of plug.dj — how much value we just may never know because of all of the barriers they have when it comes to transacting online. But clearly when people spend over two hours a day using a product/service, they do find a considerable amount of value in it.

In addition, because we had such a large international audience, that presented another huge challenge of providing international payment options that integrate easily with the website. We wanted to eventually make the pricing dynamic based on some one’s local currency value. Fans in Brazil or India or Slovakia for example should all be able to pay the equivalent value as their US counterparts. It’s just not fair to ask them to pay a higher percentage of their income just because they were born into a place where their currency valuation is less than the US. It was a feature on the road map, we just never got there.

One of our readers has tipped us to the launching of two new turntable style sites. I’ll give them a try over the coming weeks. Hopefully there is something to learn from the plug.dj experience. Speaking personally, however, I very much enjoyed my plug.dj room and will miss the service.

My Sonos Is an Internet Radio
LPFM Watch: Putting the ‘Community’ in Community Radio
Support Radio Survivor on Patreon!