I love high school radio and always look forward to visiting more stations. I’d had an open invitation for awhile from Lyons Township High School station WLTL-FM near Chicago and was glad to finally get the chance to check out the station earlier this year. Serendipitously, the station is located in the town of La Grange, Illinois in the Chicago suburbs, just a few miles from where I was attending an event on April 25, 2014. 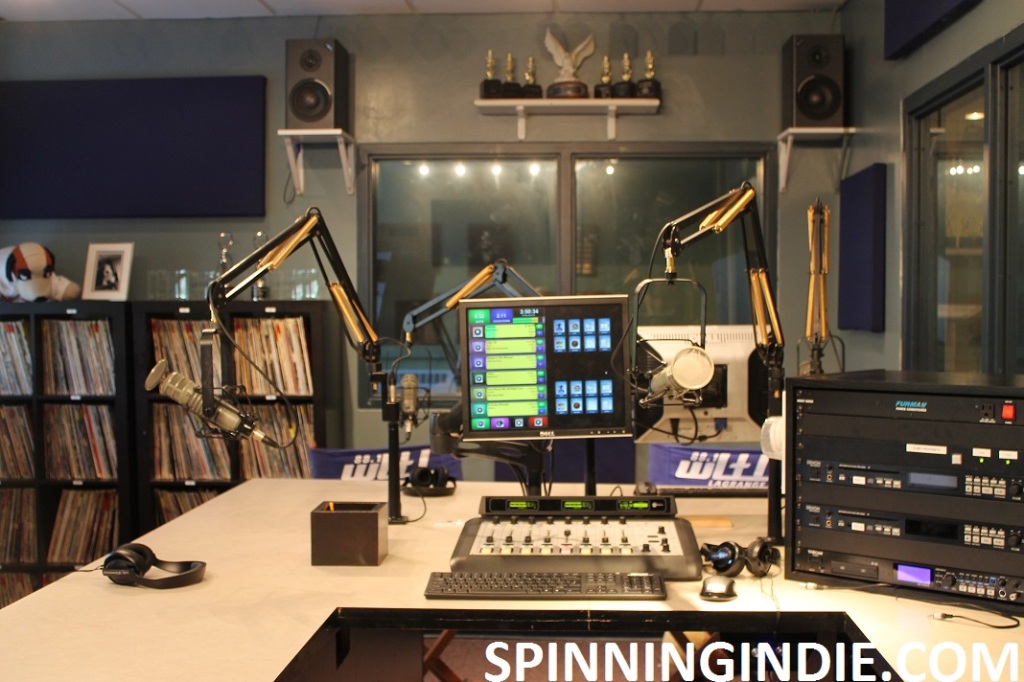 When I stopped by the station late on a Friday afternoon, General Manager Chris Thomas met up with me to give me the grand tour. A 1997 graduate of Lyons Township High School, Thomas came back to campus in 2005 to run the station (and to teach English and television classes). He has plenty of help, as there are several faculty members who advise the station and there is also a group of student managers. 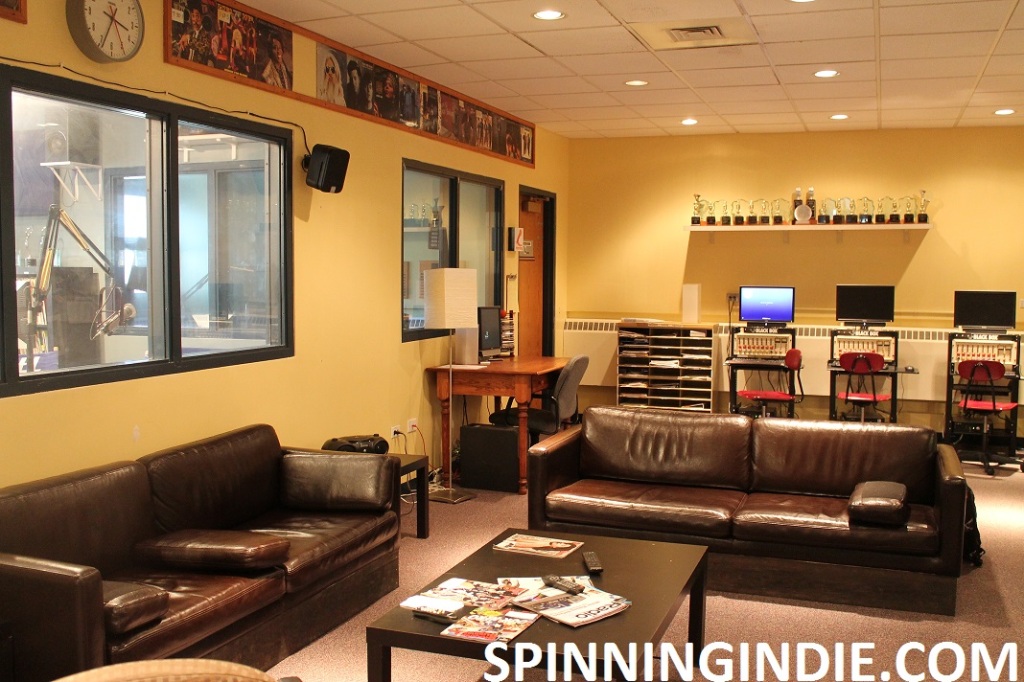 There weren’t too many students around when I visited. Thomas explained that it was supposed to be a holiday, but the school ended up adding a “snow day” makeup. Perhaps because of that, seniors didn’t show up to school. There was a state “Testing Day” the week before my visit, which also coincided with High School Radio Day. In honor of both, students at WLTL painted the studio since it was a quiet activity that wouldn’t disrupt test-takers. 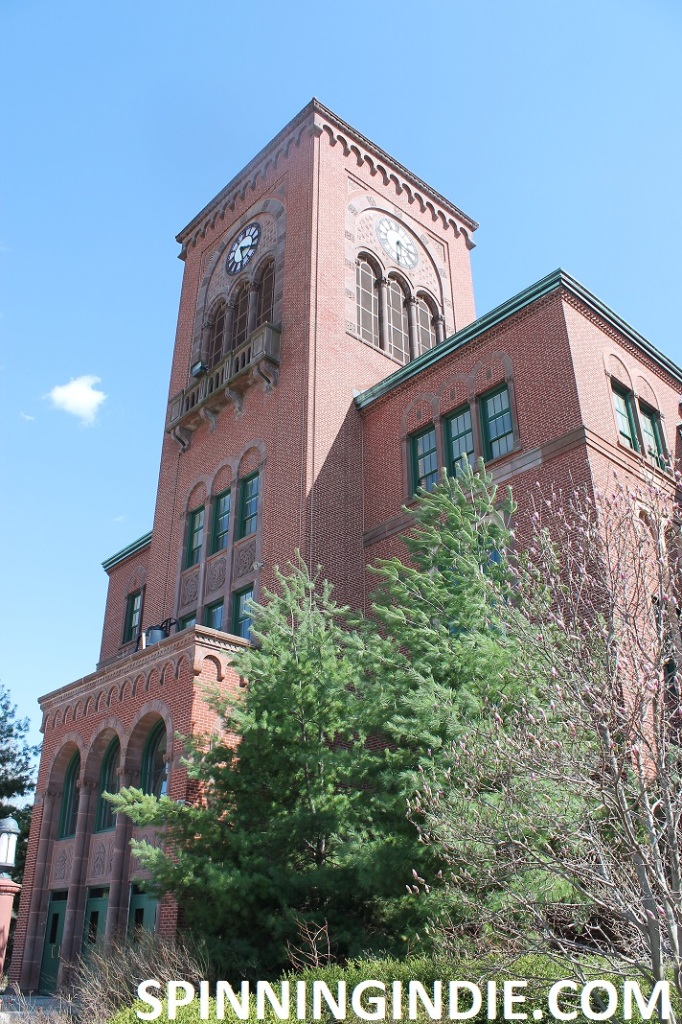 Located at a large (it has two campuses), well-equipped high school in La Grange, Illinois, WLTL broadcasts over 88.1 FM and is adding a second 1620 AM broadcast station as well. It looks like and is run like a well-organized college radio station. It probably helps that WLTL has been around for decades, which the station launching in 1968. It moved to its current location in the basement of the clock tower building in the 1980s. 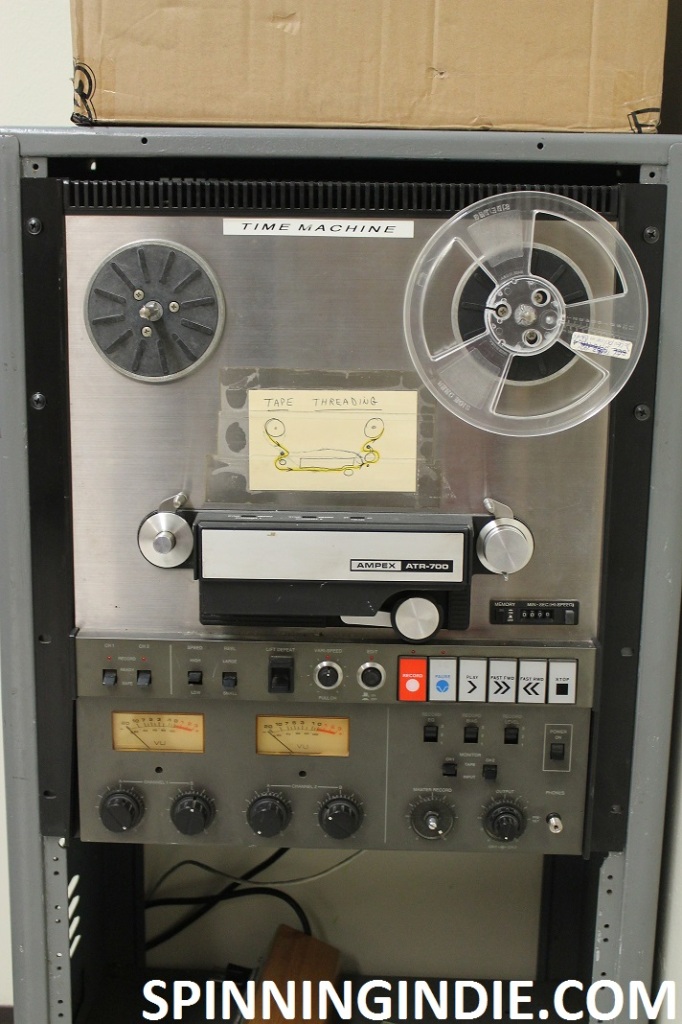 Radio actually has an even longer history at Lyons Township High School, with perhaps a wireless club starting in 1922 and the first station purportedly launching in 1927. WLTL has a strong appreciation for its history and maintains archives of old station materials, including newsletters, vintage yearbooks, and reel-to-reel recordings. Thomas told me that they are starting to digitize these old recordings and long-time faculty adviser and Technical Director Dennis Strecker (he started at the station in 1972) has been combing through it all. Thomas said that everything was taped, including air checks and radio dramas. In the process, some old choir programs were found and WLTL has been re-airing some of them. 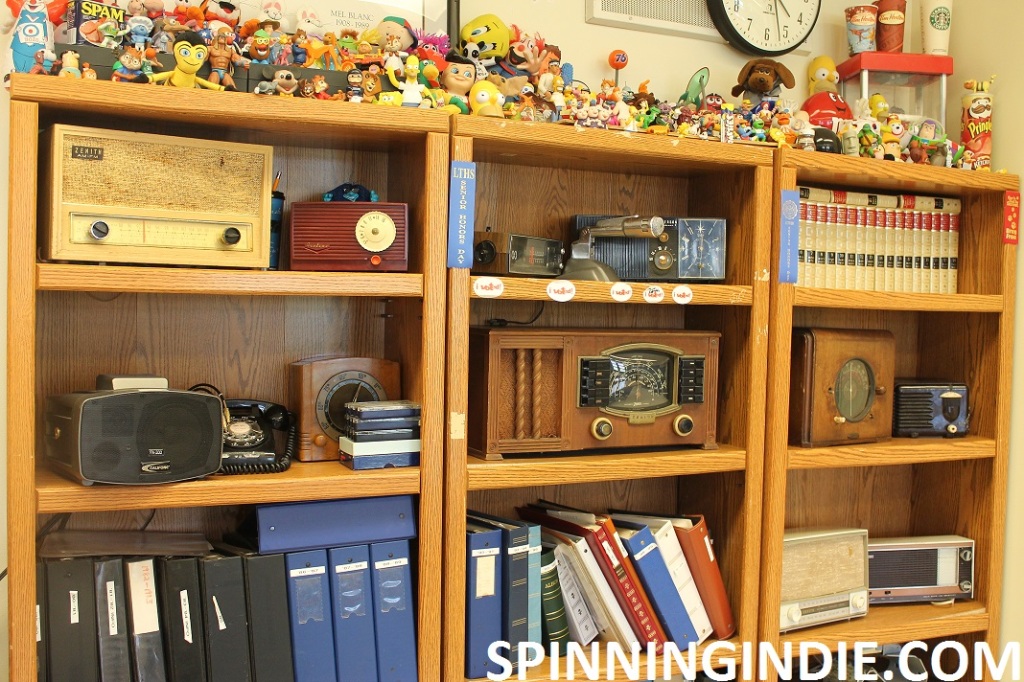 Every winter WLTL alumni come back to the station during finals week in December. These former DJs will often bring their families to the station while they do 2-hour shows and “relive memories” from their time on the air, according to Thomas. It was during some of these alumni gatherings that some of the digitization projects first started. It also helps that Lyons Township High School recently celebrated its 125th anniversary and spent some time reflecting on its history. 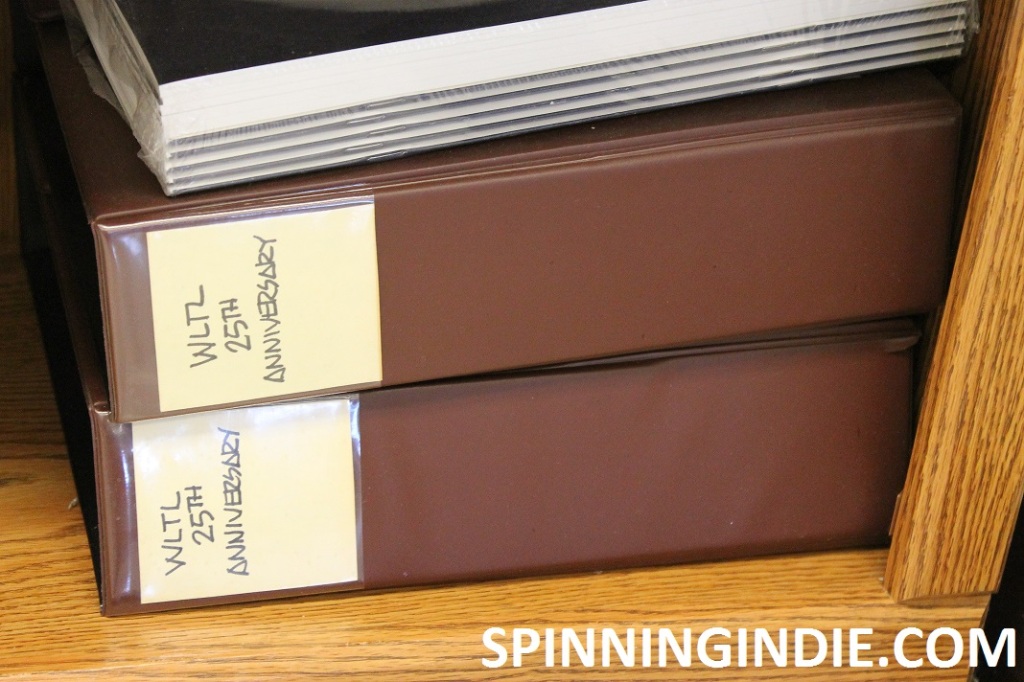 I was also impressed to read that back in 1968, WLTL pressed its own record which commemorated the school’s 80th anniversary.

Today, there are around 120 students involved with WLTL (out of a student body of around 4,000), with between 40 and 50 students hosting live shows on-air and approximately 15-20 students doing pre-recorded shows. For the most part there are 2 hour shifts, with some 1 hour specialty shows. Live DJs are in the studio from around 3pm to 10pm Mondays through Thursdays and until 11pm on Fridays. Over the weekend, shows air from 11am to 11pm on Saturdays and from 11am to 10pm on Sundays. Any time there are students at the station there is an adult supervisor there as well and those adults include parents, faculty, alumni, and others. Thomas said, “We’re just here in case of a fire.” 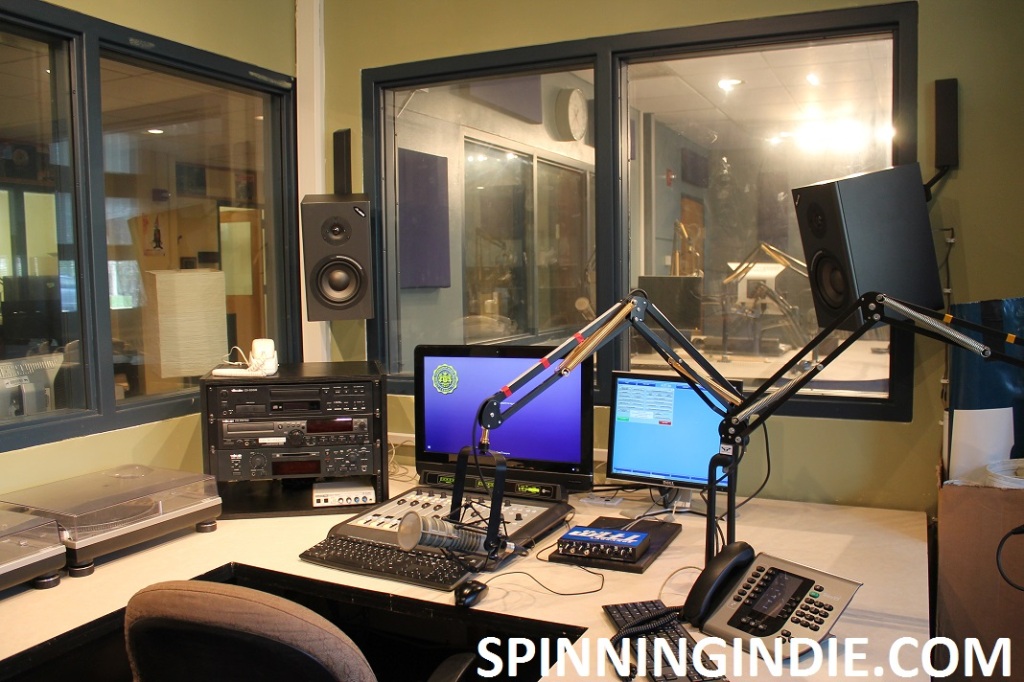 WLTL runs 24 hours a day and has an automation system that allows it to air pre-record shows and do voice tracking when there isn’t a live DJ. Hosts of live shows are allowed to select their own music, whereas hosts of pre-recorded shows add voice tracking to pre-programmed playlists of music. Thomas described WLTL as a “variety rock” station, which typically airs rock from the 1960s through 1980s. When I was there I heard Huey Lewis piping through the automation, but Thomas said that during that time there’s normally an IDM show. He said that the DJs there have an “independent spirit,” and tend to play “CMJ”-type music which is in the station’s current rotation. 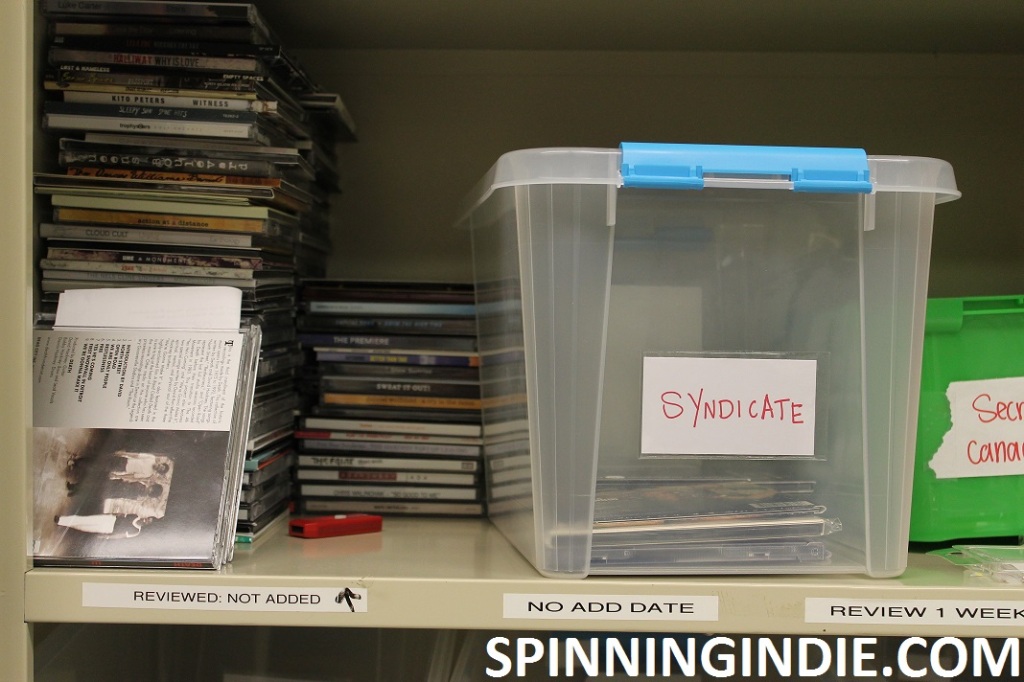 Thomas said that the station’s Music Directors add mostly rock music, but also add other genres like hip hop and R&B. He added, “if it’s good, we’ll play it.” Occasionally live bands will also play at the station. 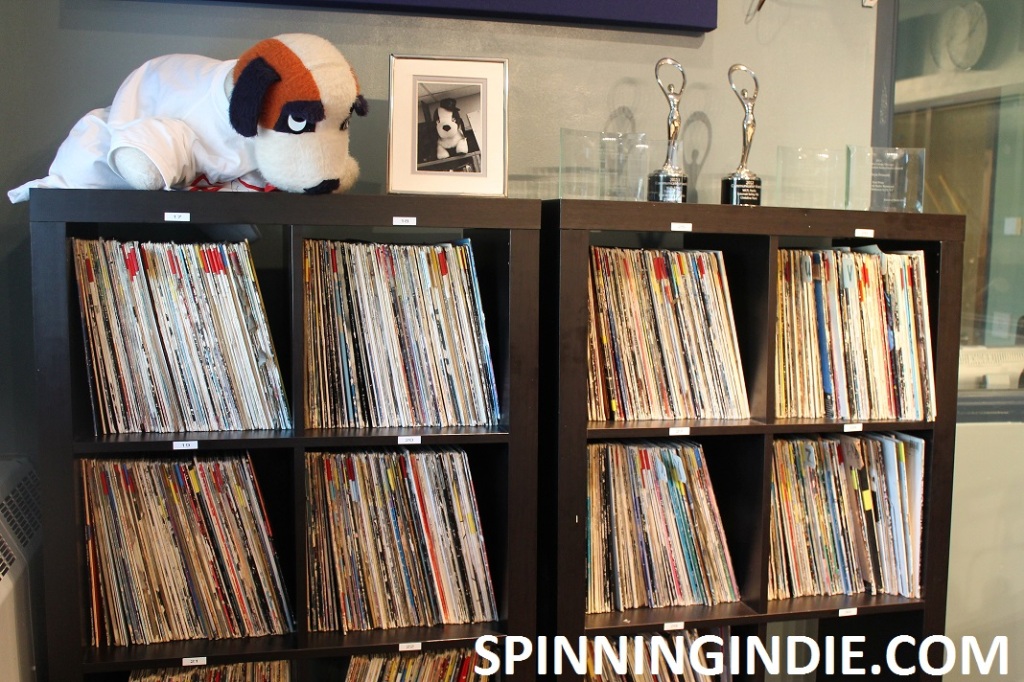 It’s a competitive process in order to get a show at WLTL. Between 100 and 120 students try out for around 40 hosting spots on live shows each semester. Up to 4 people can co-host a show, so that allows for more opportunities. Students play both digital and physical music on WLTL, with some even hosting all vinyl shows. Thomas told me that some of his students own vinyl records and he said that he’s “happy” that it gets played over the air. 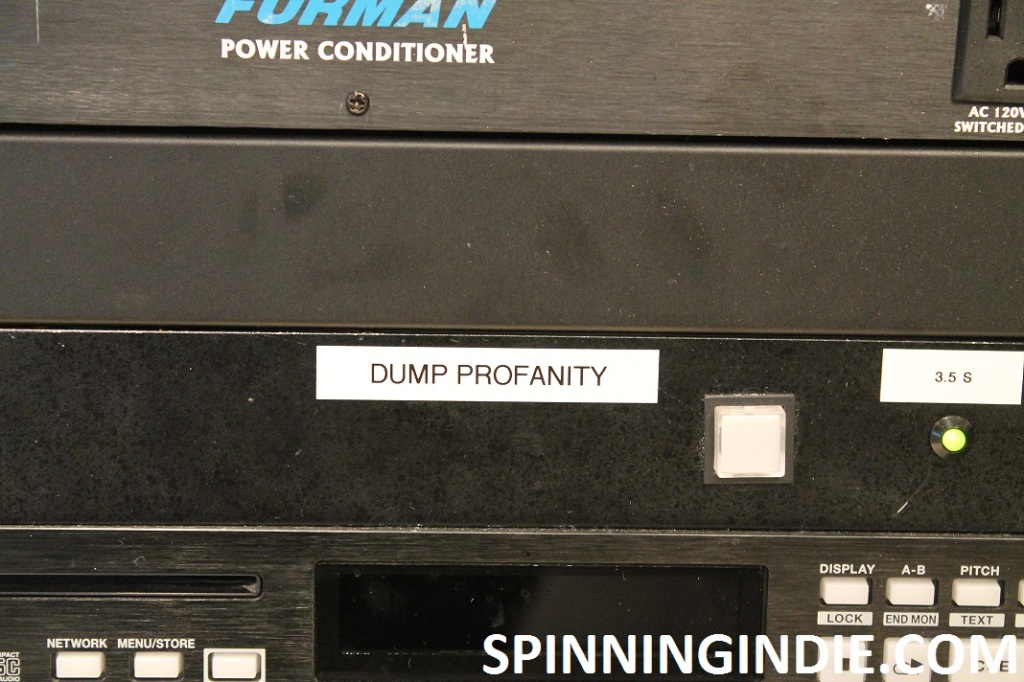 He said that the station doesn’t get sent much vinyl and that for the most part newly added music is being downloaded, vs. arriving on CD or vinyl. All new music at WLTL gets digitized and goes into the station’s Automation system. Students can also play music off of their iPods and laptops. DJs have a lot of freedom, but aren’t allowed to play the same artist twice within a 2-hour period or the same song within a 4-hour period. 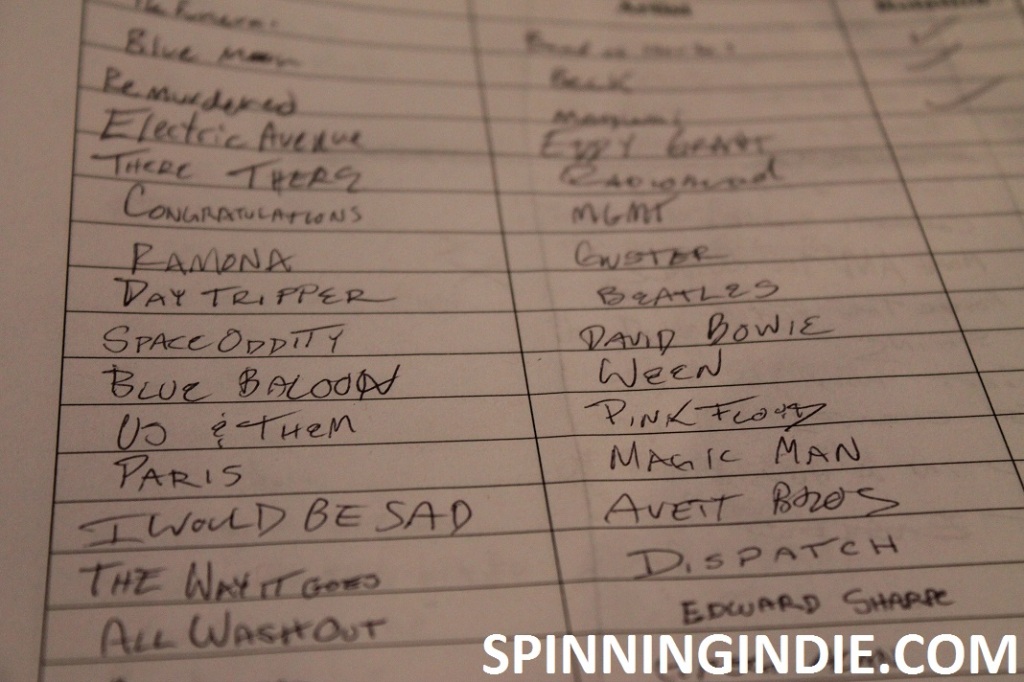 One surprising thing was that WLTL still uses paper playlists. Show hosts keep a written log of all the tracks that they play and leave the playlist at the station. Currently there’s no online playlist archive. 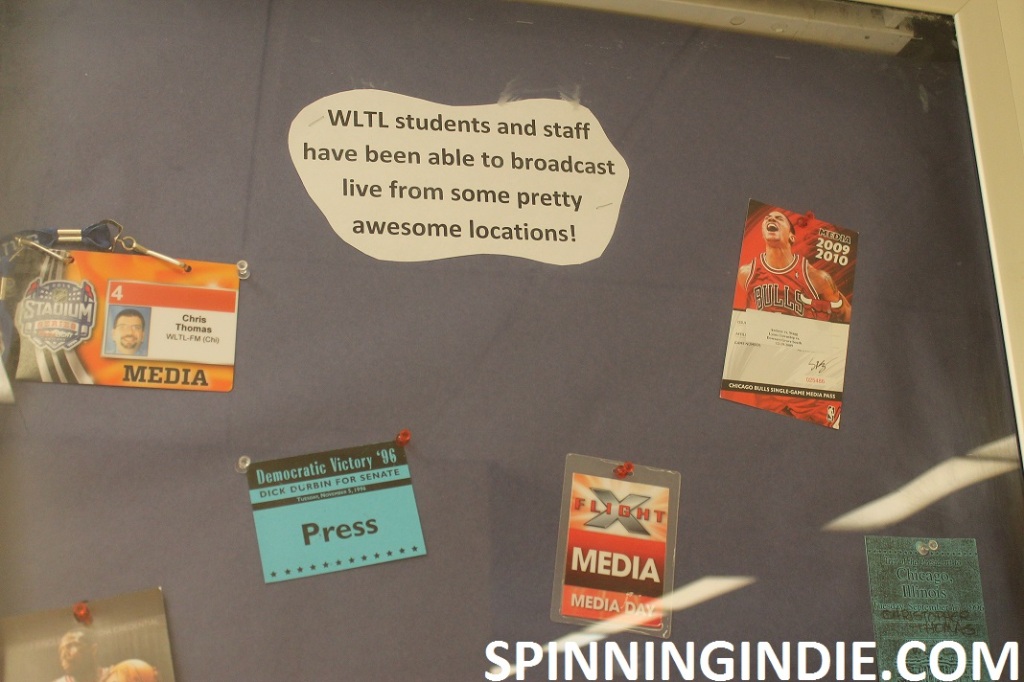 Sports programming is also big at WLTL and the station airs live football, basketball, lacrosse, and volleyball games, as well as other sports. Thomas said that they try to broadcast as many away games as they can (they’ve driven 5 hours away to St. Louis for a football game), plus they air sports talk shows. He also added that the sports broadcasts typically bring in some of the station’s highest traffic to the WLTL webstream. 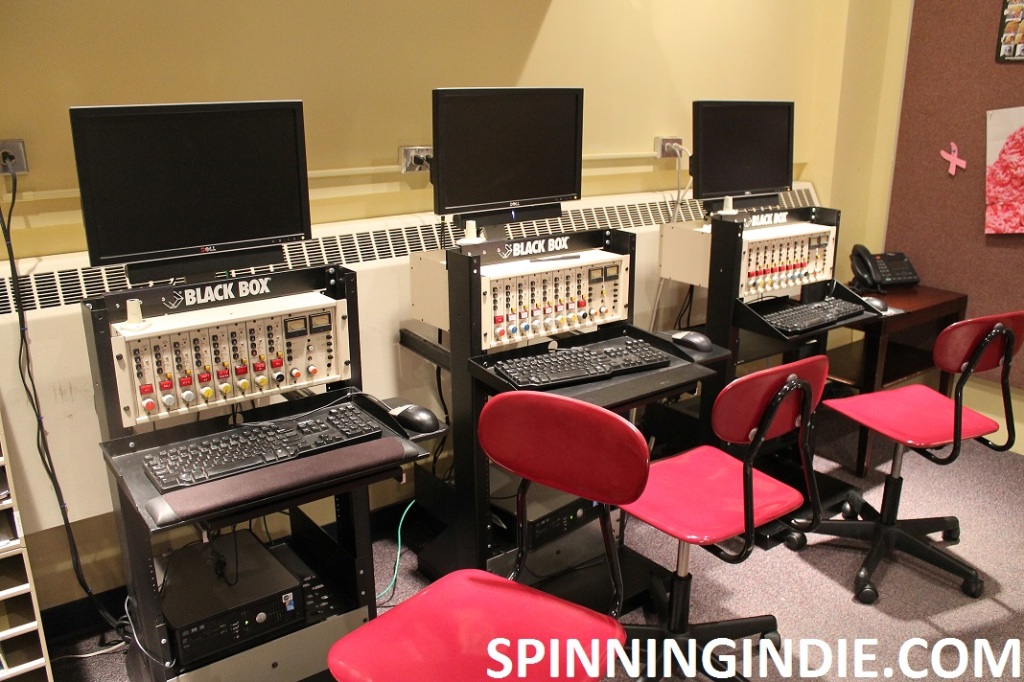 The station has three production suites where students can pre-record shows and work on spots. There are also some work stations in the large lobby, which include some donated mixers on stands from the WGN newsroom! 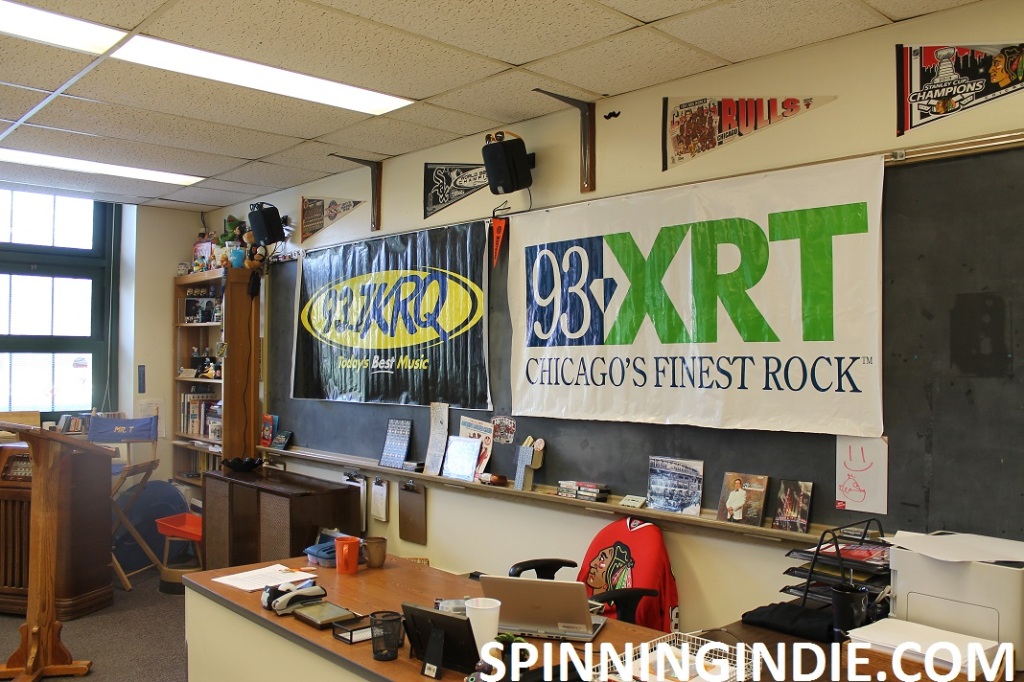 Next to the lobby is a nicely appointed classroom for radio classes. That room also has a bunch of vintage radios and some truly beautiful old audio equipment. Some campy 8 track tapes, cassettes, carts, and a stack of 7″ records were spotted on the shelves of this room, along with bobble heads (becoming a radio station staple), smurf figurines, and a can of SPAM. 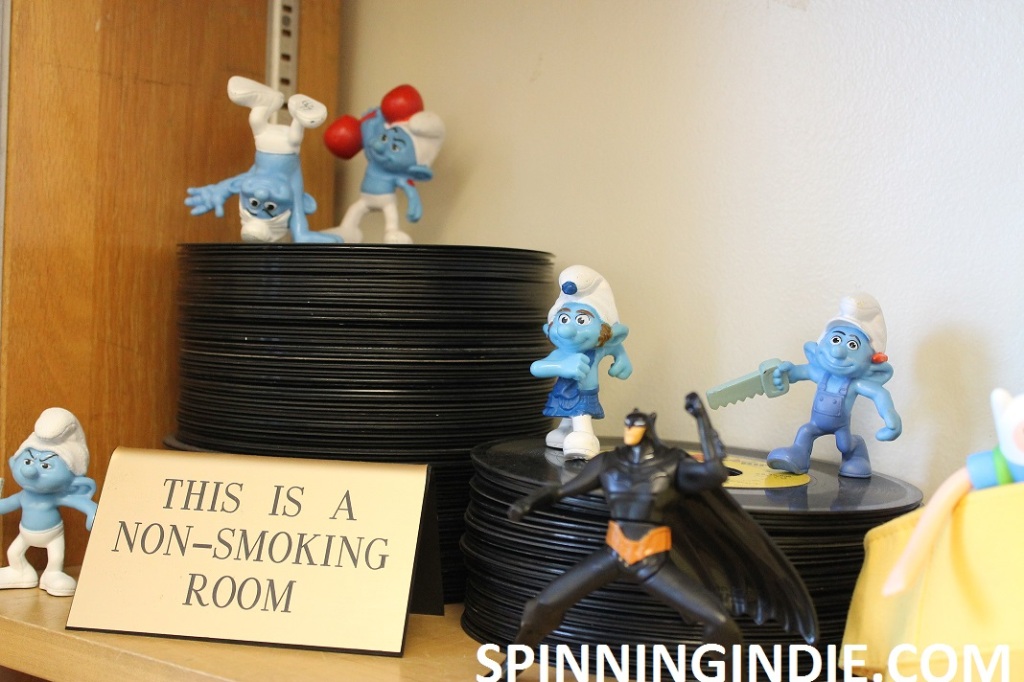 Thomas said that most students from WLTL end up doing college radio after graduation and that a “fair amount” go into radio as a career. 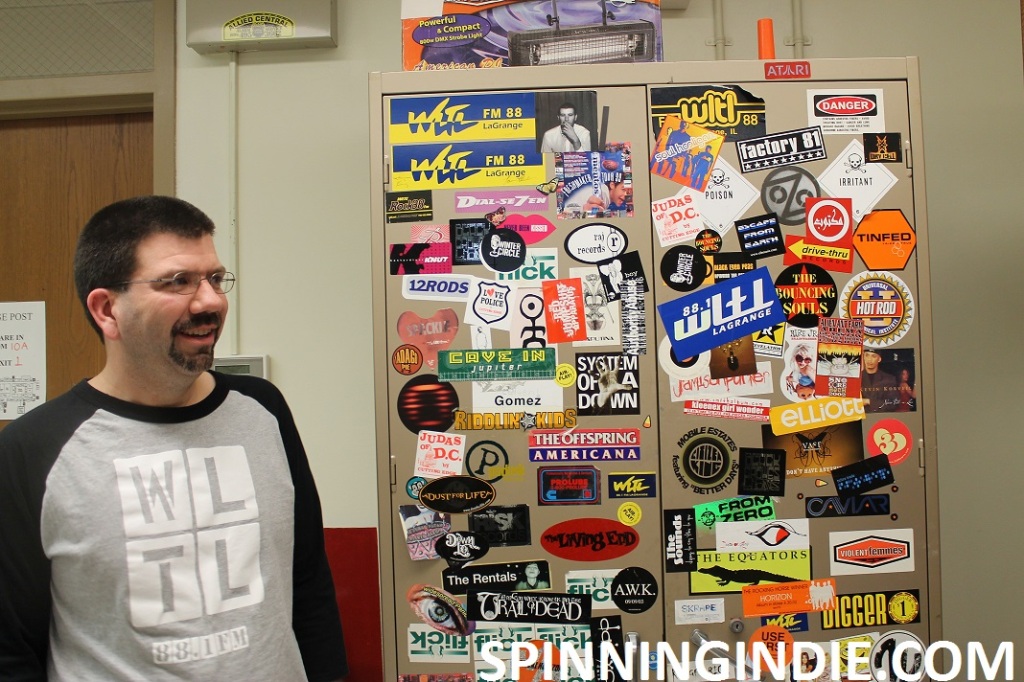 Thomas is the President of student radio organization Intercollegiate Broadcasting System (IBS) and is also in regular communication with other high school radio stations in the area (there are at least 5 with FM licenses, plus more online). He said that he talks to other station advisers and WLTL has also invited other stations to come and visit. They have a “friendly competition” with nearby station WBFH for the high school-specific Drury Awards. Thomas said that it “spurs people on,” but that ultimately “the more of us there are [in high school radio], the better off we all are.” 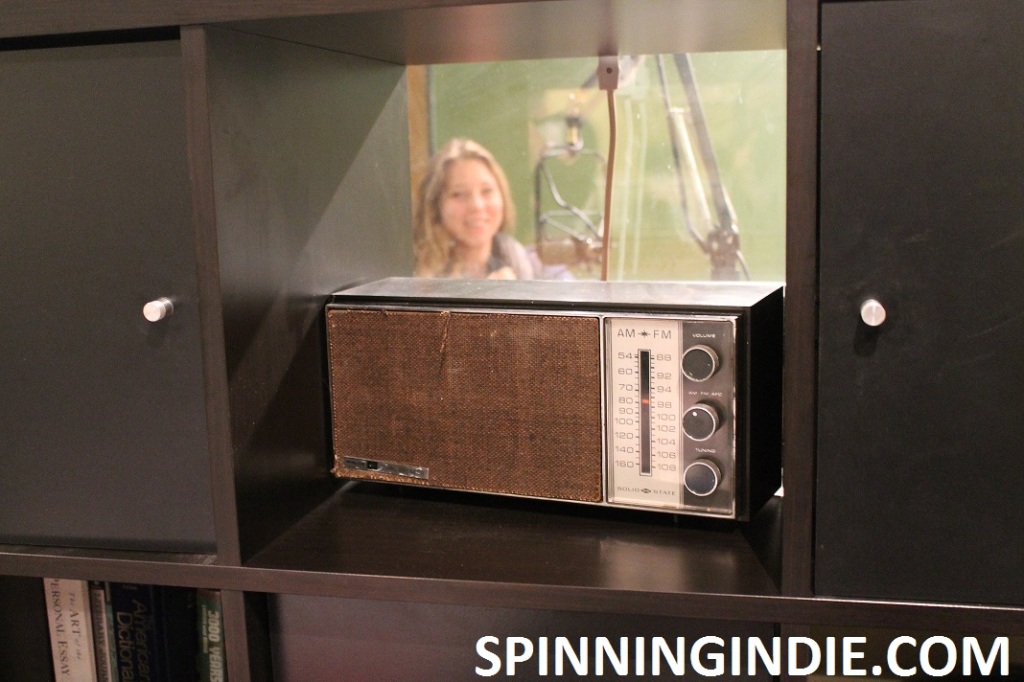 Peeking into a production studio at WLTL. Photo: J. Waits

As I mentioned, Lyons Township High School is a large school with two separate campuses. The radio station is located on the North Campus, which was built in 1888 and houses classes for juniors and seniors. A short bus ride away is the South Campus for freshmen and sophomores. Radio classes (they are considered Language Arts electives) are offered on both campuses, with courses in both Station Management and Production, as well as a Radio/TV arts survey course. Students don’t have to take radio classes in order to be involved with the station, as it also is open to anyone as an extracurricular club. 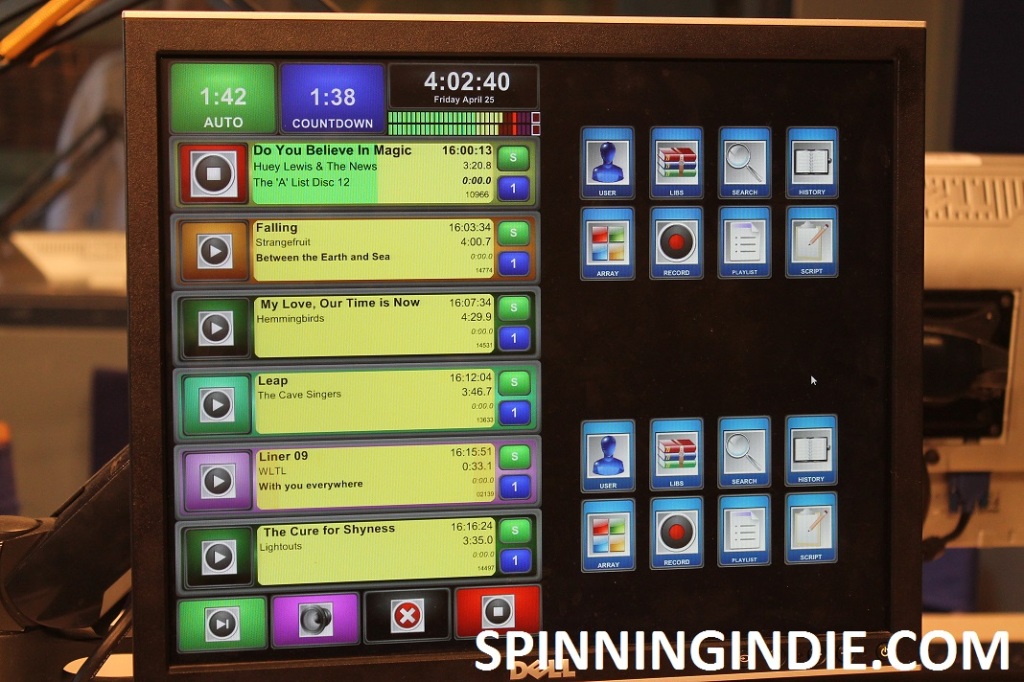 Since the school also has a television station, WLTL has also been able to broadcast some programming over campus TV, including a fundraiser and some of their talk shows. In addition to that, some programs are archived as podcasts. Students at WLTL also work with the school’s play writing class in order to produce a radio drama once a month. In addition to that, WLTL has also has a sketch comedy show called “Walk the Plank” since around 2003. 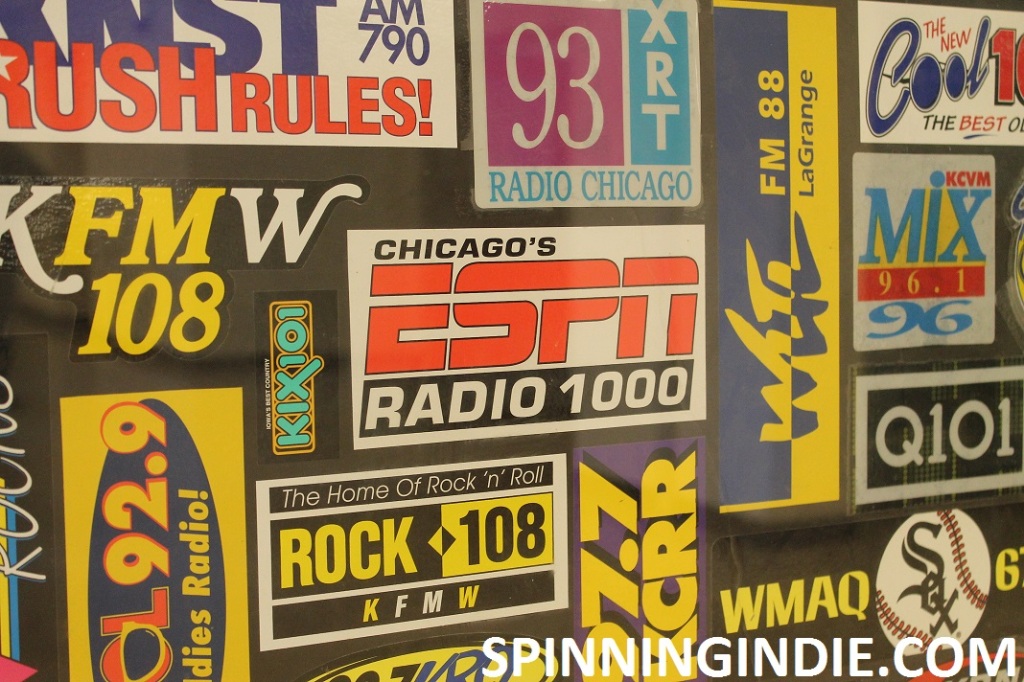 The South Campus has its own streaming station, which will eventually broadcast to the South Campus over 1620 AM as an unlicensed part 15 station. The FM station can be heard on the North Campus. Thomas told me that some faculty members will air WLTL in their classrooms and said that a lot of the teachers actually did college radio. Some will guest host over WLTL or will simply stop by the station to reminisce. 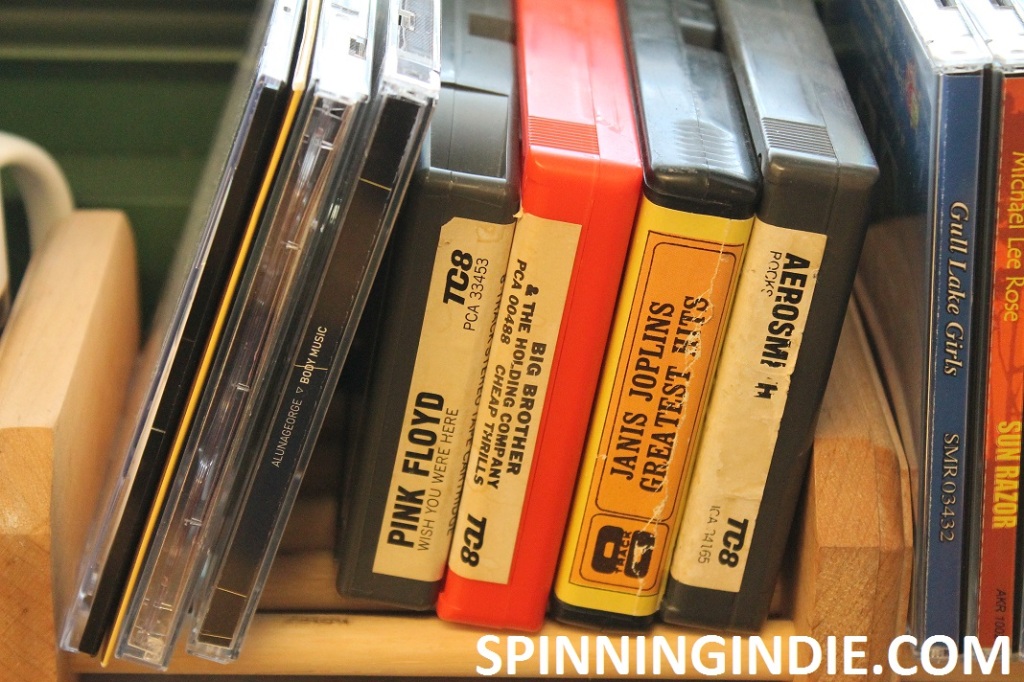 Thanks so much to Chris Thomas for the tour of WLTL. This post is my final write-up from my spring 2014 radio station tours. It feels good to be caught up so that I can move on to more recent visits. In the weeks to come I will report on trips to stations in the Seattle area, as well as another college radio station visit in San Francisco. You can see all of my station field trips chronicled on Spinning Indie.

Podcasting News and Shows for your Turkey Day Travels
2014 Holiday Gift Guide for Radio Fanatics: From Radio in a Jar to Bike Radios
Support Radio Survivor on Patreon!