By Matthew Lasar on October 20, 2014 in Community Radio

“Some people hear radio as it is and ask why. I seek radio as it is not but as it damn well ought to be.” So begins filmmaker Tim K. Smith’s marvelous documentary Sex and Broadcasting; a film about WFMU. The doc’s IMDB page describes the film as a 76 minute exploration of “the world’s strangest and most unique radio station” and “one man’s attempt to keep it alive.” It is scheduled to premiere at the IFC Center in New York City on November 15 and 17, with Smith appearing at both screenings. I’m told that the first screening has all but sold out, which is no surprise. WFMU is arguably the most influential and successful community based free-form radio station in the United States.

The master narrative of free form FM goes as follows: the genre was once the rage, then The Sixties ended, Ronald Reagan showed up, and a soul crushing philosophy called “format” fell on the music radio landscape like a ton of corporate bricks. Add the Telecommunications Act and Clear Channel to the narrative, and you get the idea. Yet there is WFMU with its passionate, hilarious, reverential, and snarky air sound streaming to a frighteningly faithful audience that begins in Jersey City and radiates out to all points reachable via the Internet.

Amen, says WFMU fan and Simpsons creator Matt Groening early in the film (we got an advanced copy), calling it “the most amazing radio station that mixed the worst, schlocky, not even hip easy listening music followed by the most aggressive punk noise barrage and then go back and forth.” This praise is followed by one of many sneak peeks inside the operation: WFMU deejay Glen Jones finishing up what is billed as the “world’s longest radio broadcast” to a throng of well wishers. Jones looks kind of pooped, to put it mildly. “I think he’s doing remarkably well considering he’s been on the air for 97 hours,” one of his fans supportively observes.

The “one man” in question, and author of the doc’s opening quote, is Ken Freedman, WFMU’s General Manager, described in the film by his many admirers as a “benevolent dictator” and “our Fearless Leader.” 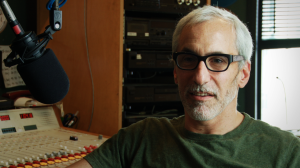 “He’s definitely an adult,” someone adds. “But he’s surprisingly immature.” Freedman is definitely the sine qua non of the station. He is seen wringing his hands as the operation’s Internet T-1 line goes dead (half of its listeners listen online), as the signal runs out of cash (much of the documentary was filmed during the crash of 2008 and 2009), and as it is discovered that new transmitter gear doesn’t work very well. A name plate sits prominently on Freedman’s desk: “The fuck stops here,” it says.

Glowing in the dark

There are many ways to govern a community radio station: very democratically, very autocratically, or somewhere in the middle. In a conference call with Smith and Freedman, Smith told me that one of the reasons he was drawn to WFMU was because it was run on what he called a “filmmaker” model. “You cannot make a great film by democracy,” Smith explained. “And great directors are all about finding amazing people and sending them forward to be amazingly creative within a setting.” Freedman emphasized that a big piece of that setting is the great state of New Jersey. “We are very proud to be in New Jersey,” he noted. “New Jersey has a great underdog status and a great self deprecating sense of humor. We’ve done a glow-in-the-dark map of New Jersey. In New Jersey it’s impossible to take yourself seriously.”

. It pretty much explains everything that you have to do to get a community radio station up and running, which is why Freedman devoured the tome and much of Milam’s other prose in his college years. I’ve heard that the author had some fairly serious and tedious title in mind at first, then his mother pointed out that lots more people would buy the book if it had the word “sex” somewhere on the cover. 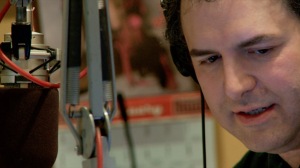 WFMU is like Milam’s mother in some ways. The station is all about freedom, creativity, and individualistic deejays doing whatever they want. “WFMU is radio for people who were picked last on the basketball team,” Freedman romantically declares in the film, “for the misfits, malcontents, slackers, hoboes, and dreamers.” But it also gets that none of that means anything if the result isn’t radio content that draws audiences. That sometimes means recruiting brilliant funny guys like Tom Scharpling, or deejays obsessed with Vladimir Putin, or bearded oldsters with steel guitars who play “Big Rock Candy Mountain” as if they were on poppers, or Jewish Moments in the Morning With Nachum Segal, or running station marathons that are often as entertaining as the regular content. “I just want to play Black Metal all night! Think of all the money you’ve spent on drugs,” one host scolds his listeners while pleading for cash. “This is nothing!” Since WFMU is entirely listener sponsored, it sometimes offers donated thank you gifts. The film shows Freedman mentioning to listeners that a painting of Phil Spector in big hair at his arraignment done by “Jorge” is still available. “I’ve tried giving it away before, but it is so horrifying” that no one will take it, he laments.

Fly on the wall

It is not an exaggeration to say that Sex and Broadcasting is a documentary that has been decades in the making. “I joined the station in 1983,” Freedman recalled. “And I think that by 1985 there was somebody trying to make a documentary about WFMU. And it seems like since 1985 there has always been one person or another making a film about WFMU.” Eventually he began telling these cinematic aspirants that “if you don’t make the movie, I want the footage.” Two subsequent efforts produced a “shitload” of actuality, in his own words, and some of that windfall has found its way into Smith’s opus.

Yet despite that legacy of celluloid, this is still Tim K. Smith’s film, and it’s a film about how WFMU works. “The kind of documentary that I was trying to make was one where we experience the day-in and day-out,” Smith told me. “As little telling and as much showing as possible. You get to be a fly in the wall at an amazing place.” Indeed, we get to see WFMU’s crazy-yet-pragmatic philosophy play out in a dozen ways. We also get a thumbnail history lesson: watching ‘FMU evolve from a college radio station to a radio station alone in an squatter infested abandoned campus (as the college collapsed) to a renewed and thriving signal with its own non-profit.

One of the things I love the most about Sex and Broadcasting is that it interviews the inevitable flotsam of any community radio signal: bitter wannabe deejays and bitter ex-deejays. The former includes a bemused Adam Horvitz, aka “Ad Rock,” of The Beastie Boys. “I came to WFMU maybe ten years ago and did a guest spot with an old band,” Horvitz recounts. “I said hey man is there any way could I get a show, because I got a lot of records, any way I could deejay on ‘FMU?” Sure, they told him. “All you gotta do is you gotta work here in the office for a year.” The expression on Horvitz’s face is priceless. “I said hell no.”

The latter includes Jim ‘The Hound’ Marshall, the first “super-star” deejay at WFMU, as one of his admirers puts it. “I would play this music that was sort of bubbling right below the surface in the mid-1950s and 1960s” Marshall recalls. “Blacks and hillbillies and street corner doo-wop groups and weird guys that had a beat up old guitar and amp and thought they were going to be the next Elvis or Little Richard but they didn’t have a fucking prayer.” But as WFMU transitioned from college to indie radio, Marshall concluded that “now the station was owned by one person.” And so during a particularly unsuccessful fundraising week, “I just went on a rant and said ‘You know what? Keep your fucking money’.” He was banned for life from ‘FMU, “which I’m kind of proud of, in a way,” The Hound admits with a mischievous smile.

I’ve got a quibble with Sex and Broadcasting. So much of the doc’s time is spent talking about its uniqueness, how WFMU is like no other radio station. That is certainly true, but there are a lot of community radio stations that are in some way like WFMU, laced with humor, spontaneity, and love for music, and effectively run by one or two determined visionaries. Many of these stations are relatively new. Some are getting Low Power FM licenses from the Federal Communications Commission. The film’s focus on the station’s uniqueness deprives it of recognition of its influence elsewhere.

But that’s a minor point. There are many touching moments in the documentary. One comes when, during the beginnings of the Great Recession, Freedman meets with the staff to coach them on how to pitch for money during the next marathon. By then some donors who had regularly given thousands of dollars to the station had largely disappeared. “I urge you not to harp on the recession or the depression unless you are going to be really funny about it,” he says to a room full of tense deejays and mail room volunteers. “People who are unemployed and hard up for money don’t need to be reminded of the fact that they are unemployed and hard up for money and going through really desperate times. They know it perfectly well.”

I asked Freedman how he knows to give such sound advice. He noted that he’s been involved in radio station fundraising marathons since he was 19 (he is now 54). “Somewhere along the line I figured out that if you are asking people to give money, if you give them any excuse to not give you money, they’ll take that excuse,” Fearless Leader explained. I’m sure that wisdom based on experience was speaking in that instance, but there’s also a sense of collective empathy for WFMU’s audience in the scene that goes far beyond any strategic thinking. You’ve just got to go see Sex and Broadcasting yourself to pick up on it.

You can keep up with Sex and Broadcasting at its Facebook page or on Twitter via @wfmuthemovie.