The flow of new low-power FM construction permits is slowing to a trickle as the FCC gets towards the end of the singleton applications. Many of the 19 stations authorized in the last week require a 2nd adjacent waiver in order to be spaced a little closer to existing stations. Commensurately, a fair number of them are located in urban metros.

We’ll see a lot more urban LPFM construction permits when the FCC starts resolving MX groups, where multiple applicants are vying for the same frequency. While it’s predictable that large metropolitan areas would have more groups interested in a station, the flip-side is that those radio dials are more crowded, hence more competition.

Why 420 Applications Were Dismissed 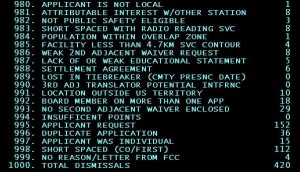 On Tuesday REC Networks posted to Facebook a summary of reasons why LPFM applications have been dismissed so far. Out of 420 dismissals the largest proportion came as a result of a request by the applicant, counting for 152 of them. The second most common reason is for short-spacing, where the proposed frequency is too close to another station.

Fifteen applications were dismissed because the applicant was an individual rather than a non-profit group, as required. The FCC rejected another eighteen because one person’s name was listed as an organization’s board member on more than one application and eight were dismissed because someone on the application has an “attributable interest” in an existing station. Both are big no-nos for a service where it’s one station per customer.

Radio World published a helpful reminder that despite their low power, LPFMs still must participated in the Emergency Alert System. Minimally, this requires having the requisite EAS equipment installed to receive and broadcast emergency messages. That’s something new stations should plan for when building out their studios and broadcast chain.

LPFM Watch is a weekly feature on Radio Survivor appearing every Thursday.