By Matthew Lasar on February 28, 2014 in Community Radio 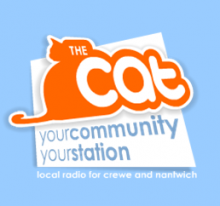 I love this station. The Cat plays lots of R&B, Country, and Soul. It has programs with names like “Cat Country,” “The Puurfect Breakfast,” “Puurfect 80s,” “On the tiles,” and “The Purfect Afternoon.” It plays Christmas music in February. It gives news updates about high school fashion shows and city council plans to upgrade train stations.

Doubtless you are now trying to remember where the phrase “Cheshire Cat” come from. It was popularized by Lewis Carroll in his “Alice’s Adventures in Wonderland,” but apparently goes much farther back. Brewer’s Dictionary of Phrase and Fable suggests that the phrase “has never been satisfactorily accounted for” but “cheese was formerly sold in Cheshire moulded like a cat that looked as though it was grinning.”

Anyway, they’re kind of thrilled about this over at The Cat. “This has been a long wait not just for the community of Crewe and Nantwich but for all of the dedicated volunteers that have worked on community radio projects in the area over the last 21 years,” says The Cat mover and shaker Paul Simpson. “We have an amazing history in our area from Youth FM, YFM Witch FM to The Cat. It has been a long journey for us to eventually reach this point so a big Thank You to all of the volunteers and the community that have, and continue to support us.  After all, it’s Your Station for Your Community!”