By Jennifer Waits on November 4, 2013 in Commercial Radio, Events

On Saturday, November 2, I attended the Bay Area Radio Hall of Fame’s 2013 Induction Luncheon. Although the latest inductees were announced several months ago at Radio Day by the Bay, Saturday’s event was a chance to celebrate the 10 individuals and the one station (KSFO as “legendary station”) joining the Hall of Fame.

Held at a banquet hall at Spenger’s Fresh Fish Grotto in Berkeley, the Bay Area Radio Museum/California Historical Radio Society/Broadcast Legends’ sponsored luncheon was a lively afternoon full of radio stories. Attendees were seated at round tables dedicated to each new Hall of Fame inductee. Serendipitously, I was seated at the “Henry Leff” table. A long-time educator at City College of San Francisco, Leff played a huge role in the development of the broadcast department and of the radio station (KCSF) at City College. Recently I’ve been digging into the history of radio at City College (I became intrigued after visiting the station last year), so I was thrilled that Leff’s daughter Judi Leff sat next to me. Clearly it’s a sign that I need to complete my investigation into the origins of KCSF!

After some time for socializing and a sit-down lunch, the induction ceremony kicked off after 1pm. Having read journalist Ben Fong-Torres’ accounts of previous ceremonies, I was prepared for a long afternoon of speeches. Organizers cautioned presenters that a strict 4-minute limit would be enforced and said that for the most extreme offenders, the “Razor Award” would be issued. An image of the mock award was projected onto a screen so that everyone could see the sharp razor blade mounted atop an award statue. David Jackson of the Broadcast Legends warned that the award “may be used to inflict grievous bodily harm” in the event of an extra-long speech. 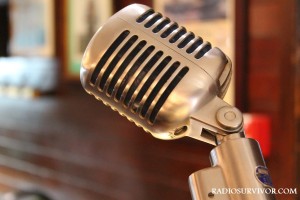 At this point it became clear to me that there was some post-traumatic stress in the room following ceremonies past, especially after sportscaster Ralph Barbieri’s (his nickname is “the razor”) infamous 24 minute diatribe in 2011 (see Greg Kihn’s antidote to that from 2012). Out of respect for the audience, 2013 inductee Mike Pechner (a meteorologist inducted into the specialty category) set his iPhone timer to 4 minutes so that he wouldn’t go over (he ended at 4:11). He received a huge round of applause.

Having never been to a Hall of Fame luncheon, I was less focused on speech length, as I was just happy to be soaking in all of the radio stories. Radio Pioneer inductee Jane Morrison started off as a columnist in 1941. Although she was told repeatedly that, “We don’t hire women in news,” she got her break when the men went off to war. She went on to have a long career in radio and was a delightful speaker on Saturday.

San Jose Sharks’ play-by-play announcer Dan Rusanowsky was inducted into the Hall of Fame in the Sports category. He joked that his first fan letter came from a death row prisoner, but also pointed out that today he gets letters from as far away as Taiwan. With its global reach via technology, Rusanowsky said that “radio right now is more important than ever.” He also talked about the magic of radio, saying, “the world can get lit up for you.”

We learned that some inductees got an early start in radio. Engineer Roy Trumbull was part of a broadcasting club at Drake High School (along with Alex Bennett), before going on to study engineering in college. 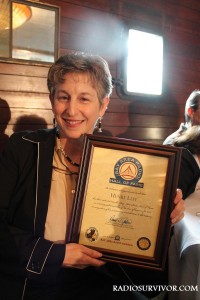 A few inductees have passed on, so it was nice to see memorials for them. In the induction speech honoring her late father Henry Leff (in the education category), Judi Leff pointed out that through his work at City College, Leff helped launch the broadcast careers of many individuals. She shared a video clip of her father in which he alluded to putting his own career in radio and theater on hold because of his passion for teaching. In the clip he joked, “I could have been a big star.”

Journalist Barbara Taylor talked about the range of events that she’s covered as the San Francisco City Hall Bureau Chief. Of all of the big news stories that she’s been a part of, she said that meeting Mother Teresa was the best experience. Taylor said that it felt like she was “in the presence of…a spiritual greatness.”

KCBS news anchor Janice Wright teared up when introducing her husband Mike Sugerman. Inducted into the news category, Sugermen recounted meeting his wife while on the job and reminisced that, “our eyes met over a crowded shooting scene.” He mentioned that he got his start in college radio at the University of California, Santa Barbara station KCSB in 1971, saying that he walked into the radio station and “I have never left.” While at KCSB he was able to cover a Ronald Reagan event in Santa Barbara. Even though there were student protestors and riot cops, he said that he got through because of his press pass (even though he admittedly had long hair and “bad clothes”). Recalling that day, he said, “what a feeling of power” and he added that having press access is like having a “pass to the front row of life.”

The late Bill Weaver, former executive at KLOK (see my tour of the historic station building here), was honored in the owner/manager category. His former colleague Judy Currier Fletcher blew past her 4-minute allotment by opening the microphone to fellow KLOK alumni. After her opening remarks and colleague introductions she announced, “my 4 minutes are just now starting.” She talked about Weaver’s passion for radio and said that she had fond memories of the days of wine and “silver trays” at KLOK, describing it as “an elegant time in radio.” 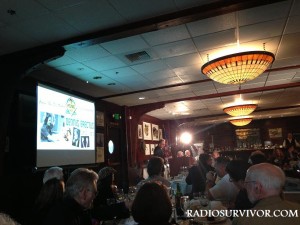 Another deceased inductee, Dennis “Erectus” Netto, was honored in the announcer/personality category. I remember hearing the shock jock pioneer (before there was the term “shock jock”) on rock station KOME when I was a teenager. His friend Jona Denz-Hamilton revealed that Netto was “really sweet” and shy in real life, but that he “had that alter ego” on-air. She said that in the late 1990s Netto worked with students at a broadcasting academy and had felt that it was the “most fulfilling job of his life.” After a short video montage of Dennis Erectus in action (including some raunchy audio clips, which the audience was warned about), one of his long-time friends came to the stage and thanked the assembled for “having the nerve…to acknowledge the lunatic fringe.” Later in the day I learned from another attendee that Netto had gotten his start in college radio at San Francisco State station KSFS in the 1970s.

The final inductee, announcer/personality Bobby Ocean, was introduced by Ben Fong-Torres. Fong-Torres joked that he had “maybe 30 minutes worth” of remarks to share. After passing the microphone to Ocean, we learned that Ocean got the radio bug in St. Louis after hearing the sound of a happy DJ emanating from a studio. Upon entering the radio station he said that he felt that he had found a “portal to a parallel dimension.” He said that with radio, there is “no sadness..only plenty…in your listeners’ imagination.”

As the clock ticked past 4pm, the ceremony concluded and attendees mixed and mingled before finding their way home or to the after party at historic KRE in Berkeley.  It was a fun afternoon of radio memories and it makes me eager to find out who the nominees for the 2014 Bay Area Radio Hall of Fame will be.