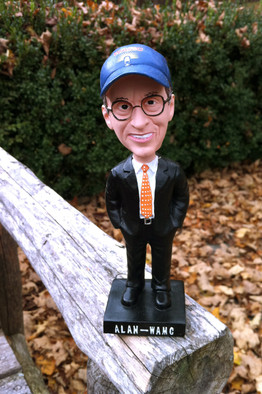 Reading Corporation for Public Broadcasting Ombudsman Joel Kaplan’s recent posts on public radio stations WAMC in Albany, New York and WHDD in Sharon, Connecticut, one could come away with the impression that these signals have become the political domains of two men on hyper drive.

For example, Kaplan, a journalism professor at Syracuse University, quotes one of his students, who has gone to work at WAMC, presided over by Dr. Alan Chartock.

“While I have not directly been put in an ethically compromising position as a result of my CEO’s support of OWS (Occupy Wall Street) or Dr. Chartock’s opposition to hydrofracking, for another example, it certainly makes me feel like the newsroom’s ethics are tested,” the student writes, “and I feel rather squeamish about it, and morally compromised as a journalist”:

“Dr. Chartock’s picture is peppered all over the front page of our website and hangs on the walls in the station along with the bobbleheads that graced the Wall Street Journal article. Alan is on the airwaves several hours a week with his one-hour interviews, commentaries and through other programs and segments. When most people think of WAMC, they think of Alan. I tell people in town that I work for WAMC, and many respond with a wry smile and ‘Oh, Alan . . . ‘ The notion that he does not speak for the station is incorrect. He is the face, voice and overwhelming viewpoint of the network. I remember from your, and other, classes at SU the notion of ‘equal time’. While we may offer commentaries or ‘open forums’, they certainly do not occupy equal time. And those open forums are often hosted by Dr. Chartock himself.”

The “cult of Alan,” the author of that WSJ piece calls WAMC. Then there is Marshall Miles, founder and president of WHDD in Sharon, Connecticut (home, by the way, to the conference that launched Young Americans for Freedom half a century ago). Miles is running for a Board of Education seat in Salisbury, which borders Sharon to the north.

Kaplan was responding to various individuals in the area who wrote to him expressing concern that Miles’ political activities were overlapping his governance of WHDD.

“When all this started happening and he started going on the air and being very critical of the superintendent and other people within Region One [the school district that Miles is seeking office in], I got concerned and questioned him on it and it didn’t stop,” the CPB post quotes former WHDD participant Susan Clayton as saying.

To which Miles responds on his Region One Report blog: “That is a BOLD FACE LIE. Since Susie left WHDD, never mind the fact that she has never once asked me to stop, as a matter of fact, she has never spoken a word to me in that time, never sent me a letter or email to stop, so that should be removed from your report.”

Sorry, but I must admit that I’m unclear what the “bold face lie” is here. The Clayton quote does not say that she asked Miles to stop. It says she “questioned him” on various matters. I also can’t figure out from his response at exactly what time she allegedly had not “spoken a word” to him, but even if she did not send him a letter or an email, there are other contexts in which she might have expressed her concerns, such as a public meeting. This he said/she said over how and when communication took place seems less relevant than the obvious fact that Clayton was concerned.

To be fair, Miles charges that Clayton has been involved in politics herself. And he has pledged to keep his board activities off WHDD. But he gives the impression, at least to me, of someone who is so wrapped up in his issues that it is difficult for him to accurately read public criticism of his actions or statements, or respond to them without sputtering. Frankly, I can relate. I’ve been there myself when it comes to public radio wars. But I’m not the President and/or CEO of a public radio station.

“There is nothing wrong with Mr. Miles running for a seat on the regional board of education,” Kaplan’s post on Miles concludes. “There is also nothing wrong with his presiding over a public radio station. What is wrong is that he should not do both at the same time. It is wrong; it is unfair; it is a conflict of interest and it should stop.”

Kaplan invokes a Code of Integrity assembled by a coalition of public television and radio stations to bolster his arguments. Public media employees should “be alert and sensitive to conflicts of interest between personal interests (including family members) and their professional public media responsibility,” the Code advises. Kaplan appears to think that this should apply to Presidents and CEOs as well, whether they’re paid or not for their position.

I wrote to the Ombudsman and asked him if the CPB has any enforcement authority in these regards. Do any regulatory teeth sit behind these words?

“Not that I know of,” Kaplan replied. “My role is simply to handle complaints and weigh in based on my understanding of both journalistic standards as well as public broadcasting’s standards of balance and objectivity. I do know that the CPB board does read my reports so I imagine that if the board is also troubled by anything I write then it can take action.”