By Matthew Lasar on August 19, 2013 in Innovation, Internet radio

Some weeks ago we posted that Hollow Earth radio has received a grant from the city of Seattle to apply for a Low Power FM license and transition the signal to a terrestrial operation. During my research on the station, I learned that Hollow Earth streamed into a Second Life room for a while. Just out of curiosity, I fired up my old Second Life account to see if any similar operations existed. Turns out there are plenty. In fact, the Second Life wiki lists many streams with a Second Life connection or presence.

Before we get to them, here’s a description of Second Life for the uninitiated. It’s an online “virtual world” in which you download a client, log in, set up an avatar for yourself, and wander about visiting online Discos, games, beaches, bars, discussion rooms, museums, pretty much anything you can think of. You are there. Gazillions of other Second Lifers are there. You take it from there. 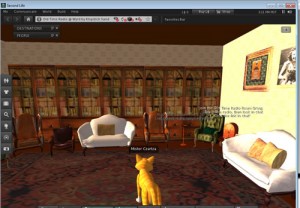 Within this context, Second Life has radio stations. My favorite venue is the Weekly Old Time Radio Shows room, which plays lots of radio ballroom music from the 1930s and 1940s.

Another location is ourworldonline.net’s OWorld Online Radio, which teleports you to a nice little park island surrounded by water and classic rock tunes. Then there is War Child Radio, run by the War Child non-profit, based in the United Kingdom, which helps kids stranded in Afghanistan or the Democratic Republic of the Congo. 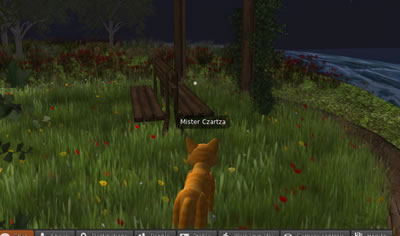 Oworld online radio; an island next to the sea . . .

Each of these links transports you to a digital terrain where you can wander around, communicate with others, and listen to songs and deejays. Just go to the Second Life search engine, type in “radio,” and start exploring. Or, check out this unofficial list of Second Life radio streams.