By Paul Riismandel on July 25, 2013 in AM Radio, Commercial Radio, Consolidation 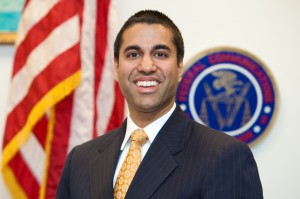 FCC Commissioner Ajit Pai visited Pittsburgh’s historic KDKA-AM on Tuesday, meeting with the Pittsburgh Radio Broadcasters’ Rountable. KDKA is the first commercial station in the US, and Pai reflected on Pittsburgh radio history as he told the roundtable that radio regulations are “overdue for an overhaul.”

Pai reiterated his support for the revitalization of the AM band, saying that he has called for an “AM Radio Revitalization Initiative” at the FCC. He also noted “very productive discussions” with acting chairwoman of the FCC Mignon Clyburn on the issue and expressed hope that there will be progress “in the coming months.”

Amongst the proposals that broadcasters have suggested is one made by a CBS Radio Vice President to convert the AM band to all digital, using HD Radio. None other than Clear Channel told Pai in May that such a move, especially with a set deadline, would be “challenging.” Another proposal is giving AM stations more FM translator repeater stations.

In the end, Pai told the Pittsburgh broadcasters that, "the FCC should look at all these proposals and post these to the public and see what sticks.”

Pai also cited the FCC’s “contest rule” as a regulation in need of revision. That rule requires stations to make periodic announcements detailing the rules of all on-air contests they run. He said that making these boring announcments doesn’t make sense “in today’s point-and-click world, where listeners would rather go to a webpage to read the contest rules if they want to read them at all.”

At the end of his prepared remarks Pai also expressed his opinion that the Commission needs to complete its Quadrennial Review of media ownership rules, begun in 2010. He said that it is “unacceptable” that the review is not finished, and called for elimination of the newspaper-radio cross-ownership rule altogether. That rule, though mostly toothless in its current incarnation, places some restrictions on the co-ownership of newspapers and radio stations by the same company in a single market.

Pai went on to say that “if you think that the combination of a newspaper and a radio station poses a real threat to competition and diversity, then I have one of Pittsburgh’s 446 bridges that I’d like to sell you.”

Given that the FCC is down to only three commissioners–a full slate is five–with an acting chair, it’s unlikely that the Commission will be moving on the ownership rules soon. AM radio may be a sufficiently uncontroversial topic that Commissioner Clyburn would be willing to set those wheels in motion before the commission is full again. Nevertheless, unless Clyburn and Pai are willing to take repsonsibility for ramming through new AM rules, one shouldn’t expect any sort of resolution before two new commissioners are seated.

The full text of Pai’s prepared remarks are available at the FCC website [PDF].