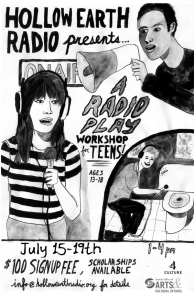 Great news for Hollow Earth Internet radio in Seattle, Washington. The city’s Department of Information Technology has given the station a $19,487 matching fund planning grant to apply for a Low Power FM license this fall. The Federal Communications Commission’s application window for LPFMs opens on October 15.

Here’s the grant language: “Help transition from an online-only community music & information broadcast to a Low Power FM (LPFM) station in the Central district. The project will apply to the FCC for a license, upgrade existing studio gear to FM-broadcast quality equipment and engage the community to discuss programming goals.”

“It’s very cool to get support like this,” Hollow Earth board member Forrest Baum told me in an interview. Even cooler: Hollow Earth can match the $19.5k with volunteer labor donations in addition to cash, making the whole process easier. Some of the money will pay for getting the engineering section of the FCC application done. Another portion will fund a staffer to help the station figure out “what we need to do to change how we work to switch to being on the air,” in Baum’s words.

Hollow Earth has been streaming music across the Internet for seven years, at first out of people’s homes. I’m told that it even piped into Second Life for a while. Hollow Earth co-founder Garrett Kelly explains:

“Early on we were broadcasting in Second Life. In fact that’s one of the reasons why it started. I was having house shows in my living room with punk bands playing and I thought it would be funny to make a punk house in Second Life and then just pump in the sounds of live house shows, plus music from local diy underground bands. I don’t remember the specifics now, but Second Life had options so that if you bought a parcel of land you could setup an audio stream to play if other Second Life players entered your piece of property. So I just configured it to play our shoutcast stream. Pretty nerdy!”

In any event, I love listening to the free form station, which outputs a distinctly dungeons-dragons-and-unix-geeks kind of sound.

In case you are wondering where the name comes from:

The term Hollow Earth comes from a theory that describes an opening in the earth at the North and South Poles. From that point, there are all sorts of speculations about whether there is another world of life within the center of the Earth. The theories on who inhabits this inner realm involve fairies, leprechauns, aliens, angels, lost civilizations – the list goes on and on. We like the idea of a Hollow Earth because our educated guess would suggest that the Hollow Earth Theory is not true, but this type of theory symbolizes the many things in life that we take for granted. Scientists have made hypotheses, but does anyone really know what is in the center of our planet?

In one way, Hollow Earth Radio seeks to examine the the unknown and the periphery of music and culture, to discover what’s going on right beneath our feet. We also feel this name mirrors our desire to move inward to unexplored places within ourselves.

It’s no surprise that Seattle is making this investment. Hollow Earth has become pretty integral to the life of the city, broadcasting at Summer Streets events and running audio editing workshops for middle school kids. Read about some more upcoming LPFM related events here.