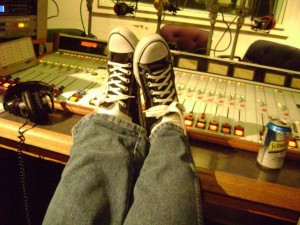 As we reported last week, everyone at Pacifica station WBAI in New York City has received layoff notices. The move follows a long spate of bad luck, most notably an unsuccessful marathon and Hurricane Sandy.

Here’s a guest blog post from long time WBAI programmer Sidney “Uncle Sidney” Smith, with his take on the situation:

Just when one thought that things couldn’t get weirder or more tragic…it does. In an insanely big way too. Just days after our dear friend, and co-worker Ibrahim Gonzoles passes away there was a double suicide at our radio station. Not actually in the studios, but two of our hosts committed suicide together.

John Littig, and Lynne Rosen who did a self-help positive living program apparently came to the edge, and went over. I could launch into my cynical feelings about all that feel good ‘new age noise’, but let it go.

I’m so very sorry they were quietly suffering. They gave no outward sign that there was trouble,..but then folks rarely do in these situations.

Shortly after that the entire staff of WBAI that’s the ‘entire’ working staff boss included gets a layoff notice from our National Office. Talk about a heart skipping a beat!

Since then we’ve been “Code Blind” as the say in the Navy. The management style of WBAI, wbai.org, and the Pacifica Foundation which owns it is to say little to its staff. So all we have is speculation.

Not a good way to run a railroad.

This has been a seriously Hellish six week period at Wbai.org. A station in a broadcast network, the Pacifica Foundation, founded by pacifists in the late 1940’s.

Locally here at WBAI New York we were seriously behind in our finances thanks to Hurricane Sandy, and years of programming inertia. Because of this double whammy we nearly lost our transmitter at the top of the Empire State Building.

We ‘did’ lose our studios, and offices in lower Manhattan. We were flooded out.

The waves came 21 feet high! To the second floor over the traffic lights, and wrecked the systems in not only our building, but most of the iconic skyscrapers of downtown.

We had to relocate far uptown to the campus of the City University of New York.

To put a cherry on the cake the staff went unpaid for a month all sorts of internal labor chaos plus fist fights over the need to radically change our programming.

What with the tragic deaths swimming uptown , and the usual on going mayhem. The local papers had a field day with us. Still any publicity is ‘good’ publicity. Especially if they spell your name right.

So what’s next. At it’s extreme Wbai goes dark on July 15th. January 10th 1960~July 15th 2013. Fifty three years, and some months. Struck down in mid-life by a combination of bad diet, and loud music.

On the other extreme it may be as some have suggested an internal Chapter 11. A grand re-organization of WBAI it make it a viable entity once again. Ya know WBAI was once the Flagship Station of the network, and affiliates. As for how this mess will shake out. Given the habits, and nature of the Pacifica Foundation it’ll fall somewhere in the middle.

The uniformed consensus is that the station will continue on in some limited fashion with a much reduced staff. We’re investing in a new building in Brooklyn, and planning yet another fund raiser for early July. So it seems we still have plans to stick around.

I’ll call in chits to find out what I can, and gleefully squeal on these guys.

As for myself well I’m one to the two longest employed staff members at Wbai. Perhaps in all of Pacifica. I came here in my late 20’s, and now edging into my mid-60’s.

Heck I even got into the movies the other day on a Senior ticket. I didn’t even have to ask the kid behind the counter just clapped eyes on me, and said, “…Senior.” Enjoy the movie gramps!

Which btw was the new “Trek” flick. It was loud confused, and mercifully quick. Hopefully “World War Z” will be slightly better.