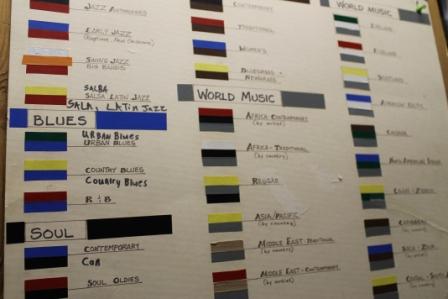 Last week I started my new Radio Survivor Scavenger Hunt series, in which I’m sharing pictures of items that I’ve spotted at radio stations during my travels.

The first week focused on station graffiti and this week’s quest will reveal a range of music genre charts that I’ve seen at stations.

Interestingly, many non-commercial stations have similar methods for categorizing music genres. Often colored tape is affixed to the spine of vinyl records and CDs. Some stations have simple systems with only a handful of categories, whereas others have sub-genres that call for several strips of different colored tape. 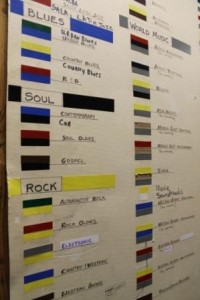 Today’s photos are from community radio station KBOO-FM in Portland, Oregon. I visited the station during my trip to Oregon for the What is Radio? conference last month.

One of the highlights of my station tour was getting to see the expansive record library, which is full of vinyl, CDs, cassettes, and reel-to-reel tapes covering a wide range of genres. The highly detailed genre chart points to the care taken in cataloging the music library into very discrete categories. Because of the complexity of the chart, I’ve included two photos today so that you can see some of the sub-categories.