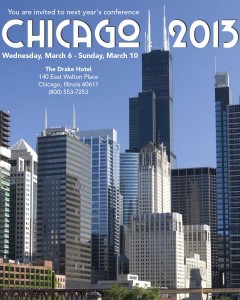 Today I learned that the upcoming Society for Cinema and Media Studies conference in Chicago (March 6-10) will feature more than a dozen papers and panels about radio.

The organization also recently launched a Radio Studies Scholarly Interest group and will have a launch event at the conference. In a post on the Antenna blog, Bill Kirkpatrick gives a great overview of the embarrassment of riches for radio geeks like me. He also writes about the intersections between radio scholarship and new media scholarship, arguing that radio is not history:

“…it is becoming increasingly clear that what non-radio scholars think of as radio is probably wrong. Maybe radio studies is getting a little imperialistic, but one can now reasonably claim to be studying radio not just when the attention is on terrestrial radio, but also satellite radio, Spotify, PRX, Third Coast, Soundcloud, large swaths of YouTube, and much, much more. As with other media scholars, the object of study is constantly shifting and represents, even more than it ever did, structures and practices extending far beyond a specific technology or technologies. The distinction between a radio scholar and a new media scholar is, at this point, mostly just a sloppy shorthand.”

Kirkpatrick provides a list of all of the radio panels at the conference in his post. Some of the topics include gender and broadcasting, Spanish-language radio in the United States, radio archives, radio industries, media ownership, disability and radio, radio in transition, All-India radio, and radio satire in Japan.