By Matthew Lasar on March 15, 2013 in International

Cambodian dissident Mam Sonando should be released from prison soon (the news reports say Saturday and it is approaching midnight there as I write this post from San Francisco). Sonando’s Bee Hive radio outlet regularly protests the huge timber land grabs being orchestrated by relatives of Cambodian Prime Minister Hun Sen and other government top brass. Bee Hive, situated in Phnom Penh, broadcasts at 105 FM.

Not surprisingly, authorities arrested Sonando for his trouble. First they accused him of “leading an insurrection,” then his 20 year sentence was reduced to a minor charge. Now an appeals court has set Sonando free. The human rights group Global Witness is hailing the decision. 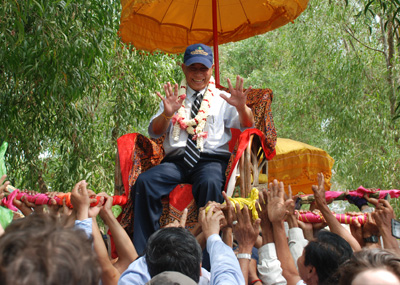 “The Court of Appeal have at last bowed to international pressure and freed an innocent man,” declared a spokesperson for the group. “But what about all the other land and forest defenders currently rotting in prison, whose cases don’t get such attention? The Sonando verdict is a welcome reprieve, but the fundamental problem still remains – the authorities must end the repression of those trying to stop the plunder of Cambodia’s land and forests.”

Bee Hive radio’s website includes an eloquent Sonando poem titled “How long will I survive?” Here is an excerpt:

Society of slavery, the rich oppress the poor without mercy. Factory supervisors beat up and kick employees like dogs  Under the owner’s influence, authorities squeeze the throat of the poor. Till tongues stick out, exploit them, break  them into pieces as a vultures do. For dollars they sell state property, mountains, sky, land, gardens, Government  buildings, statues, Angkor Wat’s artifacts, ocean, rivers, lakes, ponds, They sell fish, forests, markets, Olympic  stadium, school buildings, nation and religion. They sell everything including themselves without thinking of the  children’s future.

How long will I survive!”

Voice of Russia broadcasting to the US on HD Radio
Should KGO 810’s coat-of-arms be a turnstile?
Support Radio Survivor on Patreon!