By Paul Riismandel on February 26, 2013 in International, Shortwave 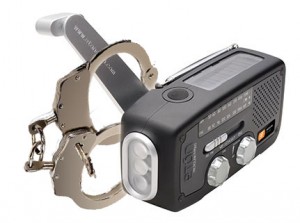 Is this an illegal radio?

Last week police in Zimbabwe banned the use of so-called “specially designed radios” capable of receiving shortwave broadcasts from outside the country, not just FM broadcasts from the Zimbabwe Broadcasting Company which is loyal to President Robert Mugabe’s party. According to the Media Institute of Southern Africa (MISA) the law is aimed at hand-cranked and solar powered shortwave radios that pro-democracy groups and foreign NOGs plan to distribute ahead of a referendum on a new constitution in March and forthcoming elections. MISA says that the ban is not supported by the law and that the police have been vague in defining exactly which radios are banned.

Shortwave stations like SW Radio Africa and the Voice of America’s Studio 7 for Zimbabwe offer popular programming and reporting from across the border that is not subject to government control.

In an article that is likely timed to coincide with the radio ban, the government-owned Herald newspaper claims another station, Voice of the People, is “in turmoil” due to being behind in paying its employees, and “faces collapse.” The article also accuses the station of being pirate and broadcasting “hate speech.”

Human rights advocates would take issue with that characterization. In 2006 the station won a One World Media award in recognition of its brave efforts to broadcast independent news from inside Zimbabwe in the face of government oppression and violence. In 2011 Radio VOP applied for a license with the Zimbabwe government and was denied. So far licenses have only been granted to Mugabe loyalists.

There are no other corroborating reports of this “turmoil” at Radio VOP in any other independent news outlets. Thus this story seems intended to sow some public anxiety over the independent station’s operations.

The Zimbabwe government’s suppressive response to outside broadcasts demonstrates just how vital radio communications are for modern democracy. Repressive regimes can more easily filter and block internet and phone communications than they can block international shortwave radio signals. Using a solar or wind-up radio, the listener doesn’t even need electricity, which could also be interrupted. These are qualities that those of us in the industrialized west can easily overlook, but should not.