By Matthew Lasar on January 15, 2013 in International 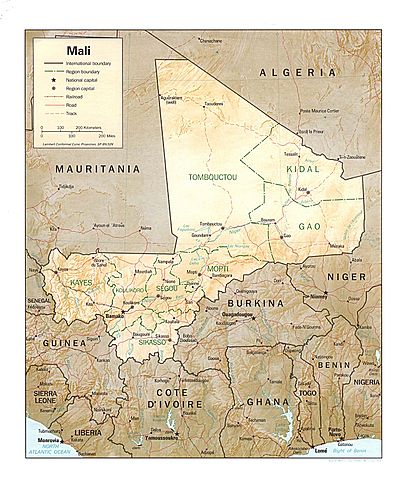 The Obama administration has not decided whether it should provide support for France’s air strike campaign against rebels in Mali. But the US’s Voice of America is on the scene with a new FM transmitter, “part of a stepped up response to the Malian crisis,” according to a press statement.

The transmitter will broadcast content in French to the residents of Bamako, Mali’s capital. “With this new capacity, listeners on 102.0 FM in Bamako will have 24-hour access to VOA programs,” VOA Director David Ensor is quoted as saying, “including reports from our network of correspondents in the region and the global reaction to the latest developments in the West African nation.”

Mali has suffered some serious “blowback,” as they call it at the CIA, from the overthrow of Moammar Gadhafi in neighboring Libya. A large continent of Libyan fighters formerly allied with Gadhafi streamed into Mali to set up their own state in the north. Anger over the unstable situation led to a coup against the country’s president. Militants seen as having links to al-Qaeda took advantage of the chaos, bidding to expand their base. That’s when France stepped in (a great background piece on the conflict here).

The Voice of America is part of the US’s network of information agencies, which includes Radio Free Asia, Radio Free Europe, and Radio Marti. VOA set up a “Mali1 Mobile” service in August. It transmits to mobile phone users. The agency is also running what it calls a “pilot program” that streams mobile news in the Songha language to communities in Northern Mali—the area now under the control of what Gregory Mann at the Africa Is a Country Blog calls an “Islamist offensive”:

. . . a successful assault on Sevaré [in central Mali] would have meant the loss of the only airstrip in Mali capable of handling heavy cargo planes, apart from that in Bamako. The fall of Sevaré would in turn have made any future military operation a nightmare for West African or other friendly forces, and it would have chased tens of thousands of civilians from their homes. These would only have been the most immediate effects. After Sevaré, nothing would have stopped an Islamist advance on Segu and Bamako, although it is unclear to me that the Islamists would have any strategic interest in investing Mali’s sprawling and densely populated capital. Still, many Bamakois feared an attack, and had one occurred the human costs would have been astronomical. Malians remember well that only a few months ago, insurgent forces ejected the army from northern Mali as if they were throwing a drunk from a bar. Timbuktu, Gao, and Kidal fell in a weekend. The army collapsed, and it has only been weakened by internal fighting since. Any other story is a fairytale.

VOA has also set up a third FM channel in Libya. It is called “Radio Sawa” and can be heard in Tripoli, and Benghazi.

Sprint to add FM radio to smartphones – too little, too late?
Maintenance… be back soon!
Support Radio Survivor on Patreon!