By Bob Mason on September 8, 2012 in Electronics, Product Review 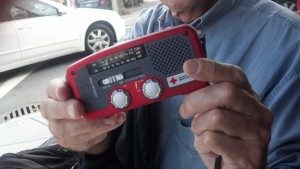 Me, myself, and my Eton Microlink

A birthday present from my best friend, a ‘portable’ radio – the Eton Microlink FR160 Solar-powered radio

, with emergency crank power and an American Red Cross sticker of approval – arrived in my life, six weeks ago and has become dear to me. Astonishingly I have found myself listening, more and more, even though I have five internet devices I could listen to instead. I love this radio so much just looking at it makes me happy. I put it to bed on the window sill every night, anticipating the joy of it being all charged up by the sunshine in the morning. It never disappoints me! Why do I listen to it? What does it give me that I can’t get over the net? Why have I started carrying it around in my pack, even though every other possible way to get music or news is lighter and has a smaller footprint, and much, much more music?

It Feels So Good

First I started listening to baseball games. AM, KNBR radio, the San Francisco Giants games. Then the Oakland A’s started winning and I started listening them on KGMZ 95.7 FM. So on a perfect day I might get 6 hours in, though usually they overlap. The mechanics of the radio intrigue and compel me in a way that no keyboard, mouse, touch pad, swipe goober, or nostril sensor ever could. It’s just so not digital. It’s analog and mechanical – the on/off know and the tuning dial work the way such things always have. I feel the off on click, I feel good when I turn it off, that I’m ‘saving electricity’. Which is superficially silly – the electricity is negligible, and if I in fact run down the charge – which has never happened so far – I could charge it up. The tuning knob requires deft manual finger work to get some stations, and to keep certain ones audible. What I can get varies from place to place, with time of day, perhaps weather.

Goodbye to All That

I walk the radio around to different rooms in my house, listening as I go about my activities, keeping it off or low enough if any else is home. I could listen on the internet – but not for free. I’d have to pay major league baseball $20 a year to do that – they prevent any streaming of their games. That’s not a lot of money – it’s the price of a ticket to one baseball game, so much the worse for us – but it irks me that I should have to pay for something that is free to produce – after all, KNBR is streaming everything except the baseball games, all the technology is there. This reminds me – economically, institutionally, politically – of the situation with long distance phone calls before the advent of the cell phone. The phone company charged – a lot – for phone calls that were not in the local dialing area of the caller. In fact, there was no greater cost to transmit these ‘long-distance’ calls than local ones – all the wires were in place, and – since electricity rather famously travels at nearly the speed of light – no appreciable difference between calling from Brooklyn to Brooklyn, or Brooklyn to East Orange, or to Irvine California. But because there was a monopoly in place – you pay the long distance or you don’t make the calls – gazillions of dollars were extracted from innocent people and pocketed by the Ma Bell/ AT&T thieving corporate government supported monopoly monster, or whatever you call it.

Surprises from people, not devices

The Eton next to my coffee cup.

After a couple of months of listening to baseball games – some of it on an earlier portable radio with numbingly bad FM reception – I finally was willing to see what other things I could get on my new radio. I was very afraid of being disappointed. I have a dark and checkered past with radio listening. Maybe a bunch of people from my generation share this problem/syndrome. Once upon a time radio, FM radio, was a source of pleasure, orientation to the world, news from a point of view I could identify with, or at least didn’t cause me to foam at the mouth with angry despair. There was at one time – at least I seem to remember this – radio that had great jazz, blues, folk, alternative music and people who talked about the music in intelligent, lively, and witty ways. People who could introduce me to new things, both newly performed and things from the past I didn’t know about. Now this is mostly dead – except for mostly college-based stations that keep some of this alive. In San Francisco, I can get KCSM FM, a 24 hour jazz station. To my great joy I discovered that I can get excellent reception of KCSM on my little radio. So I had it on as I did the dishes the other night, and Nancy Wilson’s hour long series – profies in Jazz, or something like that, from NPR is think, came on. She did a profile of Benny Waters, somewhere I’d only heard of peripherally, and his story and his music came through, amazing me. I’m now chasing all over looking for CD’s I can buy, digital stuff I can listen to, etc. Only the accident of having the radio tuned in at that time could have brought me this. On YouTube or other streaming/free sources, I was unlikely to find him, for two reasons. First, he’s only one of an amazingly large group of brilliant saxophone players in the history of Jazz, and unless you hear his story – how he gave a powerful, beautiful 95th birthday concert at Birdland, returning to New York after most of his life in Europe, despite having been immobilized by a car accident and blinded by botched cataract surgery. This story, this placing in context how remarkable this man was, wouldn’t be likely to happen on YouTube, Spotify, Pandora, or other music libraries. It requires a person, telling a story, playing segments of interviews and music, creating a narrative, creating a new audio stream to discover an old one, to call your attention, to make this musician’s life and music attractive/arresting enough to make you stop and listen, and maybe then – go to the computer, try to find his music and more about him.

All right Call me a Luddite

The fact that I’ve resisted the last phase of the techno-revolution – I don’t have a smartphone or tablet – is both cause and effect of my newly reborn love of the radio. If I had a smartphone, I could listen to internet radio wherever I was – at least in theory. I of course would be listening through my headphones, tuning out the world around me, instead of infusing that world – my room most likely – with the sound. If I had my headphones on my wife wouldn’t know that I was listening and that I couldn’t hear her unless she shouted or come over and got my attention. I am therefore less connected to who/what I want to be, not more. People firmly entrenched in the networked world think they have found an access to music profoundly better than what they had before. But this is part of a huge paradox with technology and communications and all that. To the extent that you are ‘connected’ to social media, internet music/movies/photos/porno, you are disconnected from whatever else you might have been immersed in were you not immersed in this hyper-cyber reality. Music in the outer, not inner space; social, not individual listening experiences; communication by hanging out with other people in the flesh, instead of by manipulating electronic bits of text, voice, videos. People into smartworld wouldn’t be likely to appreciate my groovy little compact red and metal gray radio. They imagine that this is a choice, that their way of getting music and talk is so much better – faster, flexible, ‘customized’ – but this is not primarily because of the attraction of the music or the talk. It is more a result of being pulled into a certain way of being, centered around a smartphone, that makes it seem better to get all your needs met by the handheld invasive mobile device.

My little red radio is my friend, not my boss. It pleases me to the extent that I want it to, and shuts up – shuts off – when I don’t want it. I don’t have to boot / shutdown / reboot / standby / hibernate / sleep. None of the people I know and like, or are responsible to, send me things that interrupt me on this device. It’s mine. It’s there to help me navigate my way through the enigmas of solitude, quietude, personal and social connection, without trying to be ‘intelligent’ or give me advice or wheedle me into things it wants me to like. It doesn’t even think about trying to control or monopolize my activities or my time. I can’t use it to write rants like this. Hence it keeps me out of the trouble that I am hereby getting into.

View all posts by Bob Mason →