By Jennifer Waits on November 2, 2011 in Religious Radio, Talk Radio 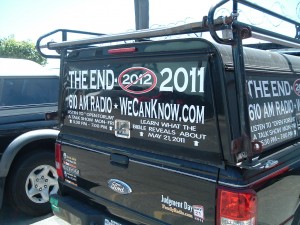 October 21, 2011 came and went and Family Radio founder Harold Camping’s dire predictions about the end of the world occurring on that date never came to be.

Although he’s been recuperating from a stroke and is rumored to be retiring from Family Radio, the 90-year-old Christian radio host was noticeably silent on his latest failed prediction. In a message apparently first posted on October 28 on the Family Radio website, Camping offers a vague apology for some of the harsh statements that he made about non-believers, leading up to May 21. Towards the end of his 5 minute plus message, he states, “Incidentally, I have been told that I had said back in May that people who did not believe that May 21 should be the Rapture date probably had not become saved. I should not have said that and I apologize for that.”

Besides that comment, he doesn’t offer much in the way of an apology to Family Radio followers. He acknowledges that,  “…when it comes to trying to recognize the truth of prophesy, we’re finding that it is very very difficult. Why didn’t Christ return on October 21? It seems embarrassing for Family Radio. But God was in charge of everything. We came to that conclusion after quite careful study of the Bible. He allowed everything to happen the way it did without correction.” As October 21 drew closer, Camping was already backing away from his formerly definitive stance about the certainty of the end date. In a message to followers in late September, he inserted the word “probably” in reference to October 21st marking the end of the world.

Additionally, a Family Radio Bible study recording dated October 16, 2011, states that Camping believed that the end would come quietly and without suffering and torture. This statement marks a departure from Camping’s descriptions of the end prior to May 21, 2011. Bible Study host Tom Evans says on the recording that he’s been visiting Harold Camping and through discussions with him he’s learned more about Camping’s views on the end of the world. Evans says,

“During our visits he has emphasized to me…that he is convicted [sic] that the end will come very quietly and that he believes that the end will come like a whisper and that the unsaved of the world will fall asleep and never re-awake. There won’t be any suffering or torture. There will be no cataclysmic earthquakes or literal stars falling to the earth. Rather the end will come without any warning and very quietly. The believers one moment will be here on earth and in a twinkling of an eye they will forever be in a new heavens, in a new earth, the new Jerusalem.  They will not remember anything from this world.”

Evans acknowledges that Camping may not be correct and asks the assembled, “Is Mr. Camping correct?” He goes on to say, “I want to believe this…I don’t want anyone to suffer.” 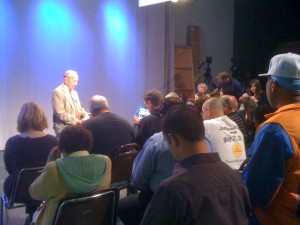 Camping’s recorded statement from this week at times sounds scripted, as if he is trying to cover specific talking points. Yet, much of it is evasive and rambling. In places (in particular the section where he offers his apology), he is a bit more animated and energized, reminiscent of his demeanor when hosting his long-running “Open Forum” talk show.

Here is the complete transcription of Camping’s new message:

“We are living in a day when one problem follows another. And when it comes to trying to recognize the truth of prophesy, we’re finding that it is very very difficult. Why didn’t Christ return on October 21? It seems embarrassing for Family Radio. But God was in charge of everything. We came to that conclusion after quite careful study of the Bible. He allowed everything to happen the way it did without correction. He could have stopped everything if he had wanted to. I am very encouraged by letters that I have received and are receiving at this time concerning this matter. Amongst other things I have been checking my own notes more carefully than ever and I do find that there is other language in the Bible that we still have to look at very carefully and will impinge upon this question very definitely and we should be very patient about this matter at least in a minimum way we are learning to walk more and more humble before God. We’re ready to cry out and weep before god, ‘Oh Lord, you have the truth, we don’t have it. You have the truth.’ And…this is another place, where we have to cry out for this.

There’s one thing that we must remember, God is in charge of this whole business and we are not. What God wants to tell us is his business. When he wants to tell us is his business. In the meanwhile, God is allowing us to continue to cry to him for mercy. Oh, my, how we need his mercy. And continue to wait on him. God has not left us. God is still God. But we have to be very careful that we don’t dictate to God what he should do. In our search in the Bible we must continue to look to the Bible. Look to the Bible. Because there is where truth comes from. And God in his own time table and in his own purposes will reveal truth to us when it’s his time to do it.

In any case, we do not have to have a feeling of calamity or a feeling that God has abandoned us. We are simply learning. And sometimes it’s painful to learn. We are learning how God brings his messages to mankind and my, my, we have claimed to be a child of God and therefore we, as we search the Bible, we’re bound to feel the darts of the Lord as sometimes he gives us the truth and sometimes he gives us something that causes us to wait further upon him.

Whatever we do, we must not feel for a moment that we have been abandoned by God, that he has [sic] no longer helping us or interested in us. Oh, my, what an encouragement it is to be able to go to the Lord again and again. ‘Oh Lord, I don’t know anything, Lord you teach me.’ And that’s the attitude that has to be part of each one of us. And God will not abandon us. He will provide. But, we have to be just very careful that we don’t dictate to him when that has to happen.

Incidentally, I have been told that I had said back in May that people who did not believe that May 21 should be the Rapture date probably had not become saved. I should not have said that and I apologize for that. One thing we know for certain, that God is merciful. Merciful beyond anything that we would ever expect. And so we can pray constantly and should be praying constantly. ‘Oh Lord, we look to thee for thy mercy and we’re so thankful that we know that thou art so merciful.’ How wonderful to know that God is still on the throne, that he is king of kings and lord of lords. And that he hears every one of our prayers. And let’s not hesitate. Let’s be, if anything, let’s be. Be pray more than ever for God’s mercy and keep praying and God will provide. But, God is in charge and we must always keep that in mind.”

Podcasting, satellite, internet and broadcast: it’s all RADIO to us
Guess How Many Licensed Radio Stations there are in the U.S.?
Support Radio Survivor on Patreon!