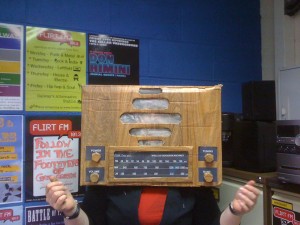 Being both a radio and a popular culture nut, I always get a thrill when I see a radio station worked into the storyline of a film or television show.

As part of their 50th anniversary celebration (which also includes a design contest with a deadline on Friday, September 9 and an upcoming art exhibit), college radio station KCSB at University of California, Santa Barbara is working on a radio-themed film festival. Right now they are in the process of brainstorming a list of movies with radio themes and they are seeking suggestions. Some of the films on their list so far include: 8 Mile, American Graffiti, Pirate Radio, Pump Up the Volume, and Radio Days.

I’ve compiled my personal list of my top 5 radio-themed television shows and also pulled together a list of films featuring DJs in peril. What other essential radio films and TV shows are out there? And which are your favorites?

But does your radio station have its own beer?
Could a Community Radio Station Save Your Life? Hurricane Irene’s Radio Heroes
Support Radio Survivor on Patreon!