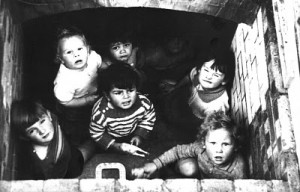 “There is no such thing as an ‘illegitimate child’,” early public radio producer Elsa Knight Thompson once said. “There may be illegitimate parents.”*

Thompson made this remark during the Battle of Britain in 1940. Raised in Seattle, she had married an Englishman and come with him to Europe. She was evacuating children from London when someone asked her if her group took “illegitimate” kids.

“Yes we do,” she added after making the comment. Someone at the BBC heard Thompson’s authoritative voice and asked if she would help staff its international affairs desk, which she also did. Then she returned to the states and became a public affairs producer for the Pacifica radio network in the 1950s and 1960s.

NPR was about a dozen years old when Thompson died in 1983. At the risk of speaking for the dead, I suspect that it would have dismayed her to read NPR’s new ombudsman announce that he wants to launch an open ended discussion about the appropriateness of the i-word for children.

“Start the debate,” Edward Schumacher-Matos titled his latest post in response to listeners irked by the use of the term on a Weekend Edition report. The illegitimate label was used during a recent Q&A between Scott Simon and NPR reporter Eleanor Beardsley about the marriage of Prince Albert of Monaco to Charlene Wittstock—former Olympic swimmer from South Africa.

SIMON: Is the new couple under some pressure to produce an heir?

Some listeners didn’t think that this was appropriate.

“I would suggest that this language is no longer acceptable,” Schumacher-Matos quotes NPR listener Sigmund Roos protesting. “I am the parent of two adopted children, both born to unmarried parents. I understand the origin of this word, but I think that it implies a cultural value that no longer has any currency, and can be seen as insensitive—or even—offensive.”

NPR’s ombudsman followed the listener comment with an interesting discussion about his own family background. “Pejorative birth labels attached to children were never fair, but may have been defensible—or at least acceptable—under once-dominant religious and traditional family values,” he noted.

“But given that 41 percent of the children born in the United States in 2009 had unmarried parents, according to a preliminary report by the federal government, and that the proportion continues to grow in a long term trend here and in Europe, media tags such as ‘illegitimate,’ or ‘love child’ or ‘born out of wedlock’ now seem out of step.”

Well put. Seventy years ago one of the forerunners of public broadcasting already thought that these terms were “out of step.” Maybe a new “debate” about them is, too.

*The Thompson quote comes from Pacifica Radio: The Rise of an Alternative Network (Temple: Philadelphia, 1999), p. 177.