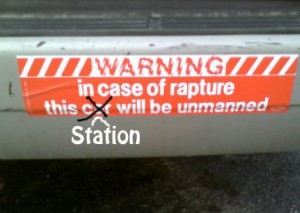 You’ve seen the bumper stickers, and today at least it’s true for Family Radio. Their website has been unreachable all day, likely due to being overloaded with traffic. So that’s also made it difficult to get their online radio stream. So I tuned in to Family Radio’s shortwave station WYFR this afternoon (at 13615 Khz) and it certainly sounds like the station is on auto-pilot.

Beginning at about 3:15 PM CDT the station aired a half-hour long Frequently Asked Questions list about the rapture, including explanations for why the world didn’t end in 1994 as Harold Camping first predicted (answer: he had incomplete information, as indicated by a question mark in the title of his book Are You Ready?). At 4 PM CDT a pre-recorded edition of Camping’s Open Forum call-in show went on the air. The first caller was challenging Camping’s May 21 rapture prediction, making Camping’s subsequent defense all the more hollow.

Of course, I shouldn’t be surprised Family Radio is automated today. As Jennifer reported earlier this week, the station’s programming is “generally produced several weeks in advance.” Furthermore, the station gave the staff yesterday off as a holiday. Although the Open Forum program is typically aired live, we also shouldn’t be surprised that today’s edition is a rerun, since Camping told Jennifer that today “he’d probably be watching TV and listening to the radio to hear about what was happening around the world.”

6 PM local time is when the rapture was supposed to happen today. As I write this 6 PM has occurred in most of the world outside of the Americas and there’s no report of rapture (although some have jokingly connected a Icelandic volcanic eruption that happened this afternoon). Nevertheless, I will tune in to WYFR at 6 PM local time for the Florida-based station just to see if there is any indication that the big CEO has taken control.