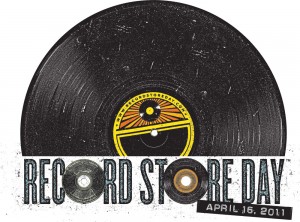 I’m already starting to map out my list of record stores to hit this Saturday, April 16, 2011 for the 4th annual Record Store Day. Some people will be lining up for limited edition releases (particularly vinyl), others will be heading to stores to check out live performances, and many (like me) will just be happy to be out celebrating independent record shops and dropping some cash into their coffers.

As with last year’s event, there are a number of radio stations hooking up with like-minded independent record stores for special in-stores, DJ sets, parties, and limited edition releases. Here’s a short guide to some of the radio-related goings on:

On Friday, April 15 starting at 8pm, Radio Boise will host a party to celebrate the launch of their new community radio station and to serve as a kick-off for Record Store Day. Performances and DJ sets will be part of the event at Neurolux (111 N. 11th Street in Boise) which will also serve as a fundraiser for the new station.

University of Colorado’s college radio station KVCU (Radio 1190) will have members of their promotions team hanging out at Absolute Vinyl in Boulder (4474 Broadway) on Saturday for Record Store Day.

Twist & Shout (2508 E. Colfax, Denver) will feature a number of radio DJs spinning records at their store on Saturday. DJ Arturo Gomez from public jazz station KUVO spins from 10am to noon, DJs from community radio station KGNU are up from noon to 2pm, and Radio 1190 DJs are on from 2pm to 4pm (Professor Mikey and DJ Sam).

University of Calgary campus-community radio station CJSW will be celebrating Record Store Day with special programs starting at 7am Friday and continuing through Saturday, including vinyl showcases and interviews with folks from local record stores about both Record Store Day and the future of vinyl.

Take a look at Paul’s post earlier this week about the pop-up record store and radio station courtesy of the record label Numero Group. Their low power radio station WTNG will begin streaming at 9pm Central time on Friday, April 15. The terrestrial broadcast over 89.9 FM will air on Saturday from 9am to 9pm Central Time. A lovely PDF of the full schedule is posted on their blog.

Tonight from 8-10pm Central Time, WGRN at Greenville College aired a special focused on Record Store Day, featuring interviews with owners of local record stores, as well as an interview with one of the organizers of Record Store Day: Eric Levin.

Vinyl-loving WRXP DJ Paul Cavalconte (here’s an interview I did with him in 2009) will be hanging out at Tunes Records (225 Washington Street) in Hoboken, New Jersey from 1pm to 3pm. Another WRXP DJ, Rich Russo, will be trekking between various records stores in the vicinity of New York City and will document his journey on Twitter (@DJRichRusso).

At 2pm the rocker, poet, and KCRW DJ Henry Rollins will be spinning music at the Hollywood location of Amoeba Music on Saturday.

To coincide with Record Store Day, University of Minnesota station KUOM (aka Radio K) is releasing the latest in their series of recordings (“Stuck on AM”) culled from live performances at the station. This cassette, release (which also includes a code for free digital downloads of additional tracks) will be available free on Record Store Day at the Electric Fetus record store in Minneapolis. Radio K will also be at that event, playing music out of their Radio K van at a cookout in the backyard of the record store.

Commercial radio station Live 105’s DJ Aaron Axelson will be at Amoeba Records on Haight Street from noon to 8pm Saturday with a live broadcast and on-air interviews.

At 11am KFJC DJ Curtis Kimby will be spinning records at Streetlight Records (980 S. Bascom Street) in San Jose on Saturday. Live performances by Judgement Day and Mercy Ties will happen later in the day starting at 4pm.

If you know of other radio stations doing special events in honor of Record Store Day, please add details in the comments section.