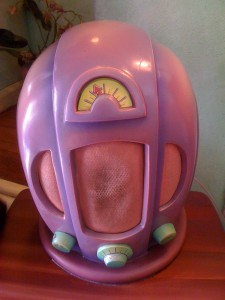 Listening to the Radio in Minnie's House at Disneyland

A study released this week from the Pew Internet and American Life Project reveals some interesting tidbits about how people in the United States are increasingly turning to the Internet as a major source for news.

However, the report, “Understanding the Participatory News Consumer” (PDF) also highlights the fact that people continue to seek information from multiple sources, including radio. According to the report, in a typical day, 54% of Americans “listen to a radio news program at home or in the car.”  The study also found that 59% of study participants reported getting news from both online and offline sources.

The report goes on to describe the demographic differences between various segments of news seekers. Here’s what they say about those who listen to radio news:

“Looking at those who are most likely to listen to radio news either at home or in the car on a typical day, several demographic groups stand out: those between ages 30-64, college graduates, and those who use the internet and cell phones.

Radio news is also a major draw for Republicans and conservatives, compared with Democrats, moderates and liberals.”

To see how those listening to radio news differ from those getting their news from TV, newspapers and other sources, take a look at the complete report. It also shares some really interesting findings about participatory news consumers, who tend to utilize multiple news sources and are more likely to interact with the stories that they consume (by blogging, commenting online, posting to Facebook, using Twitter, etc.).