It was after dark when I arrived on the University of Richmond campus on Wednesday, March 15, 2017. Although I had a general idea of where college radio station WDCE was located, I had to circle the building before eventually spotting the station’s sign above the stairs leading down to the entrance to its basement lair. The on-air DJ Todd Ranson let me in the building and gave me the grand tour. 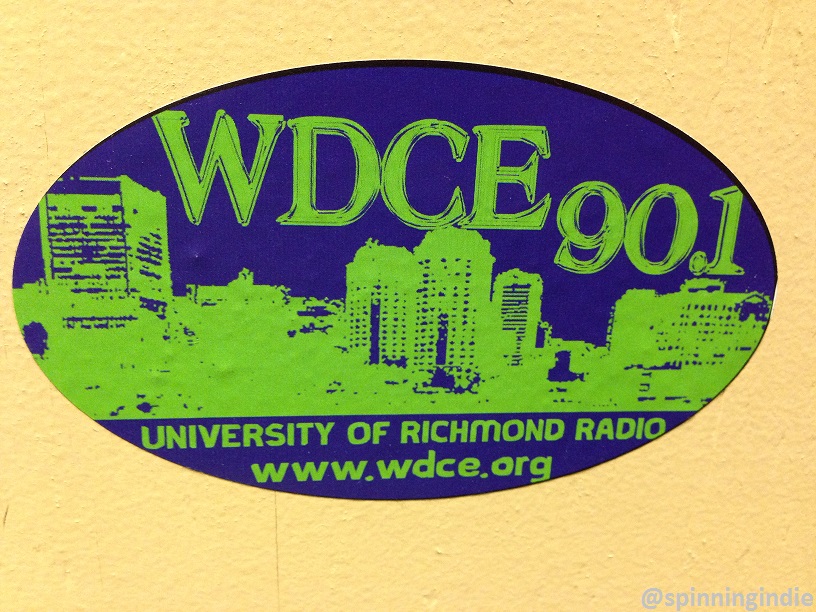 WDCE sticker on the wall of the University of Richmond college radio station. Photo: J. Waits

I was amazed to find out that Ranson first got involved with WDCE during his first year at the private liberal arts university in 1983 and has been on the air off and on ever since. He recalled that on his first day of freshman orientation, he drove to campus, said his goodbyes to his family, and then headed straight to the radio station, telling me, “I was completely smitten.” After making connections there, two hours later he drove back home to see Neil Young in concert. When he started at the station, R.E.M. was all the rage and he Ranson was into 1960s garage rock. Always interested in learning about the latest music, he continues to listen to a lot of radio, telling me that he particularly likes British radio, as he finds that it’s about two to three weeks ahead as far as new music goes. 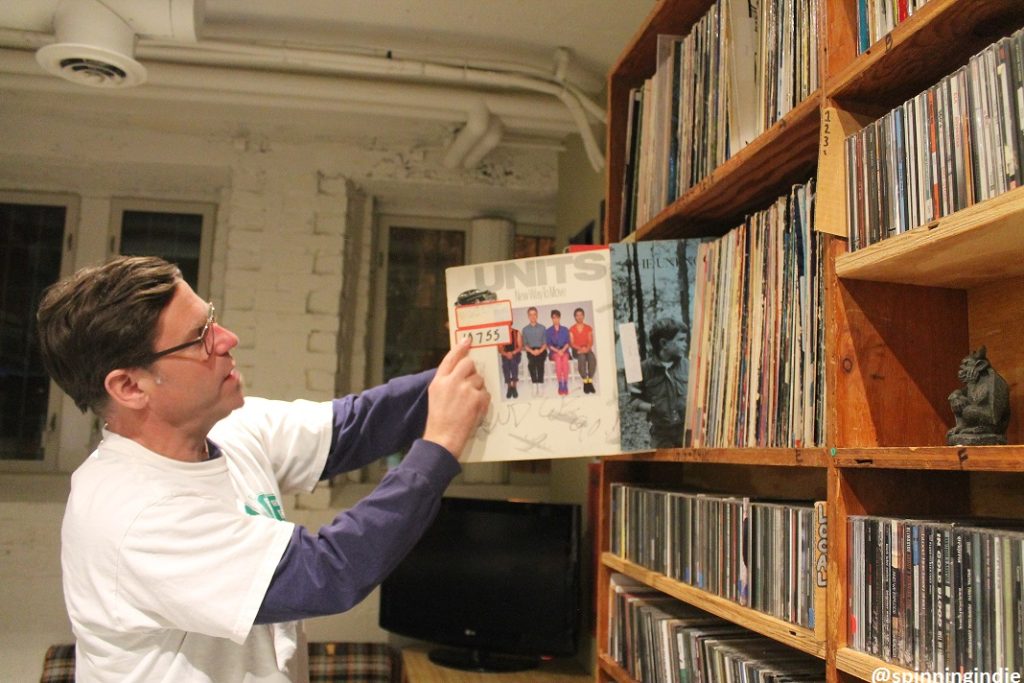 Ranson also lauded the Richmond radio scene, telling me that the city is “very blessed” with so much good radio. He also subs at community radio station WRIR-LP occasionally (see my station tour #124), telling me that many WRIR DJs got their start at WDCE. Additionally, there are some WDCE DJs who have shows on other stations, including WTJU (see my station tour post #129), hinting at the tight-knit worlds of college and community radio. 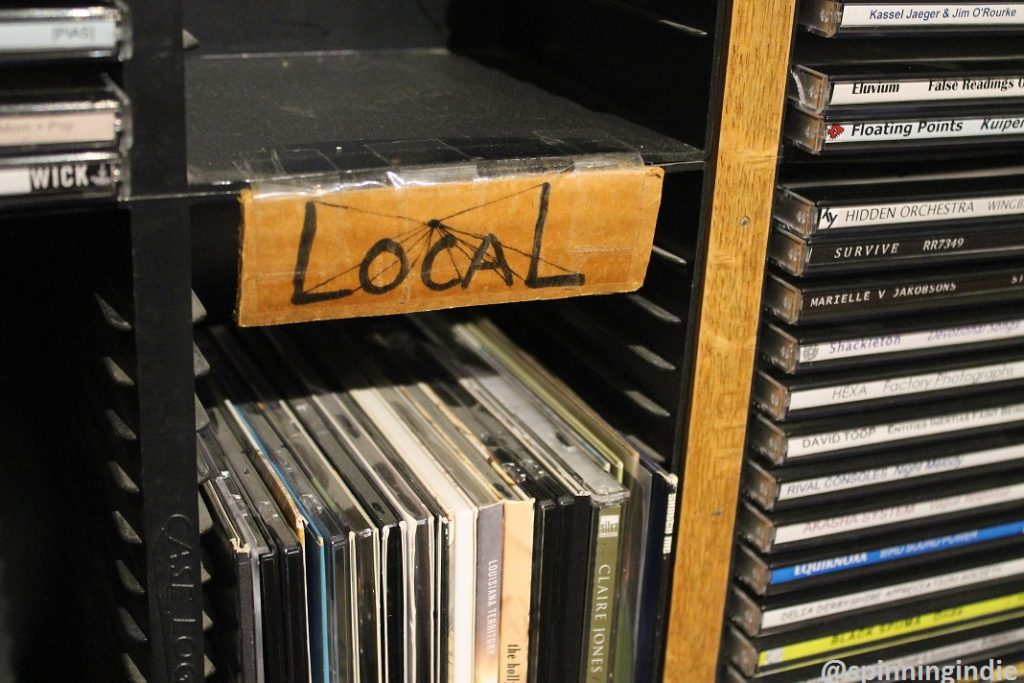 Since he’s been at WDCE through many generations of students, Ranson shared some perspective on how the station has changed over the years. He told me that WDCE was extremely popular for many years and then interest in the station among students waned in the mid to late 1990s. He was heartened that in the past four years or so, there’s been “tremendous student support.” The station even got a new studio maybe five or six years ago. Ranson said that the basement space was originally the kitchen for a women’s dorm from around 100 years ago. It had a dirt floor and was a “wreck” before being remodeled into WDCE’s current digs. 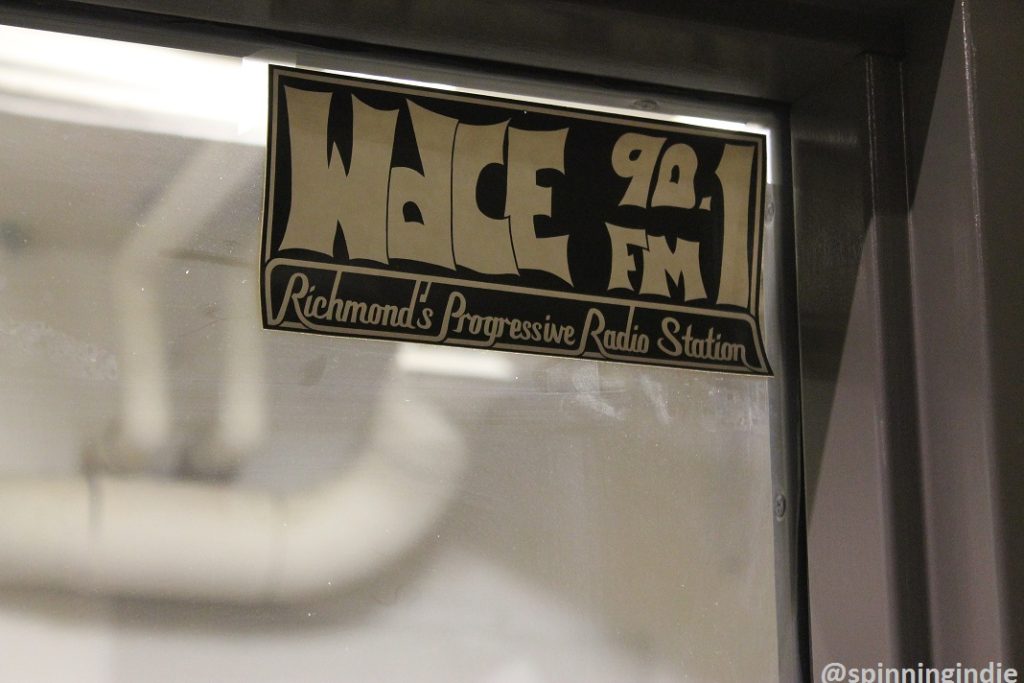 Surprisingly, Ranson is not the most veteran DJ at WDCE. In fact, there are station participants who started out at the station as far back as the 1960s. A 1962 plaque on the wall was evidence of those early days, when the station’s call letters were WCRC. According to a piece in University of Richmond Magazine, radio “activities” took place on campus as early as 1922. Carrier current station WCRC launched in 1960 and WDCE’s FM broadcasts began in 1977. 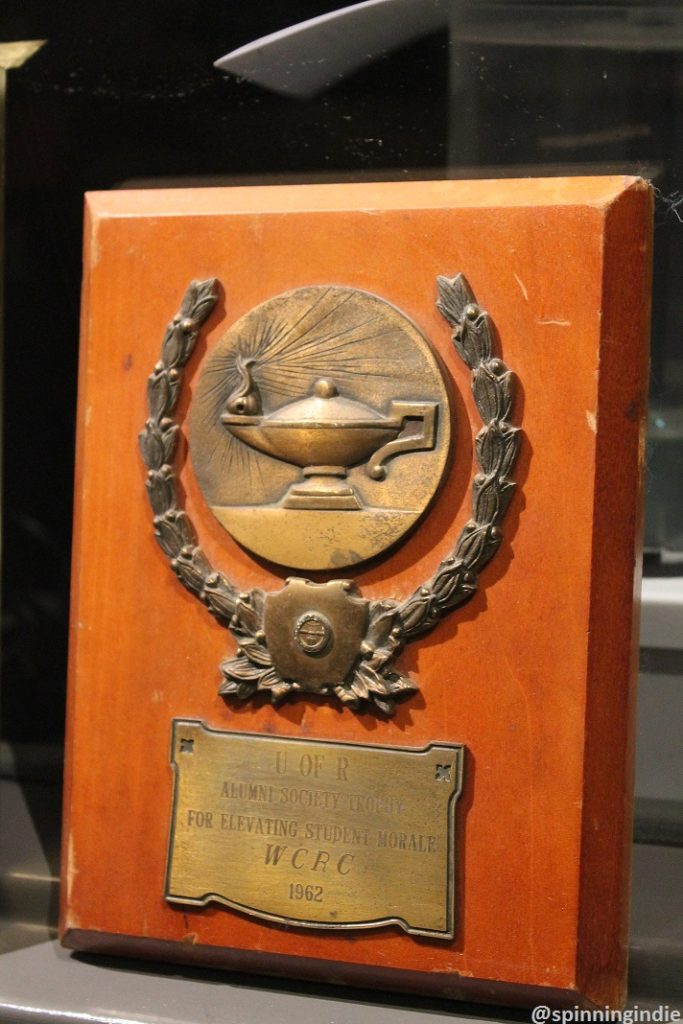 Today, the station is student-run and has a mix of student and non-student DJs broadcasting over 90.1FM in Richmond, Virginia. Ranson said that the station is a “blank page” for students and people have taken on a wide variety of interesting projects. On-air, DJs have a lot of freedom and he likened college radio to the “wild wild west,” where you can almost do anything you’d like. 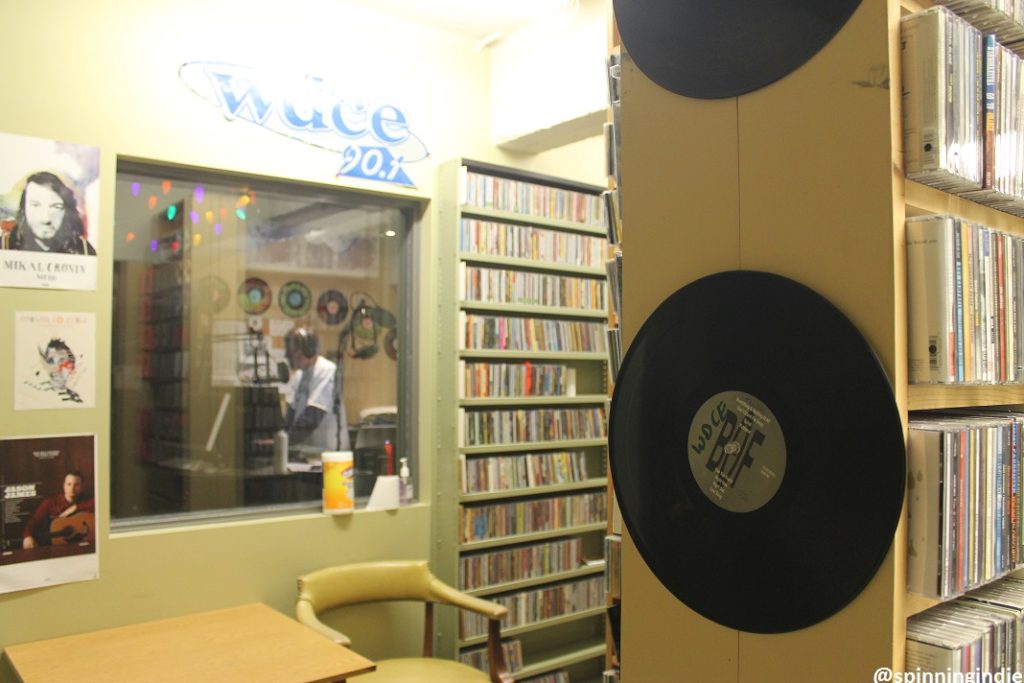 The WDCE space consists of a large on-air studio with windows overlooking a record library on one side and a seating area with shelves full of LPs on another. A couple of additional rooms house office/storage space. I hung out while Ranson wrapped up his show and did the hand off to the student who was on the air after him. Although he first started in radio in the age of LPs and cassettes, Ranson comfortably mixed in music from YouTube, CDs, and LPs during the bit of his show that I saw. A fan of all kinds of new music, he sources material from many different places. 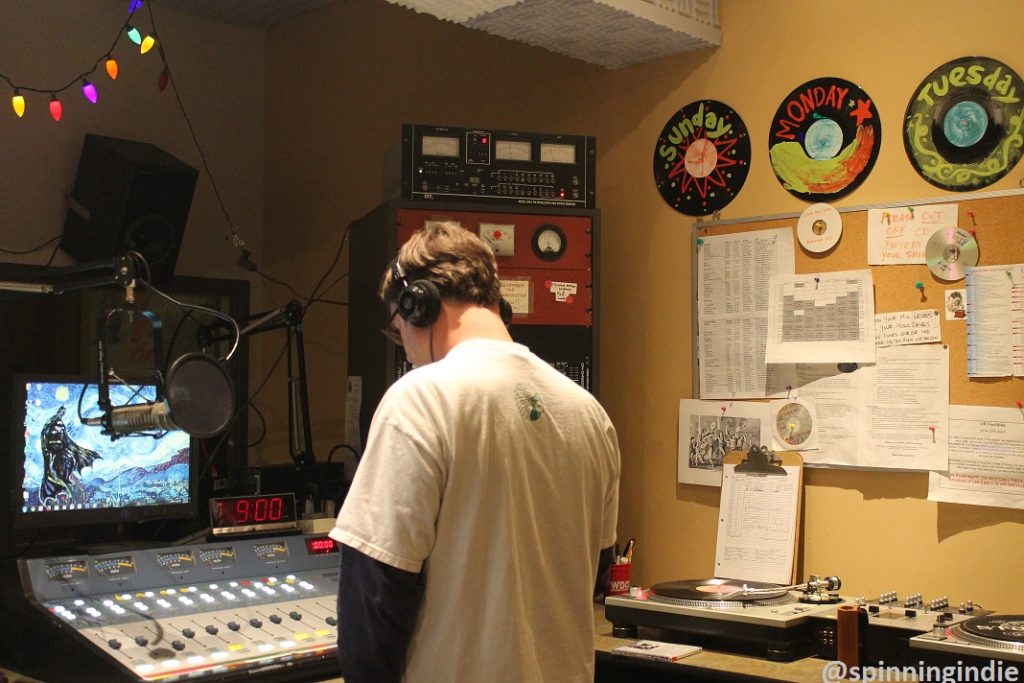 Following my visit, I caught up with WDCE Program Director Sam Schwartzkopf over email to learn more about the station. In addition to overseeing programming, she hosts a Thursday afternoon show called “Glamorous Indie Rock N Roll,” whose title was inspired by a Killers song. She explained, “My co-host plays largely indie, while I specialize in folk and some pop-punk! It’s a conglomerate of a show, to be sure. Sometimes we have themed shows, which are an interesting challenge for the week. For example, our last one was a ‘Soundtrack Day’ where each 15 minute segment featured a different movie soundtrack we grew up listening to.” According to Schwartzkopf, there are around 70 DJs total. She said, “…they are split evenly between students and community,” adding the caveat that, “This is not by design but by coincidence.” Live shows typically air from 9am to 1am and during the late night/early morning hours, WDCE goes off the air. 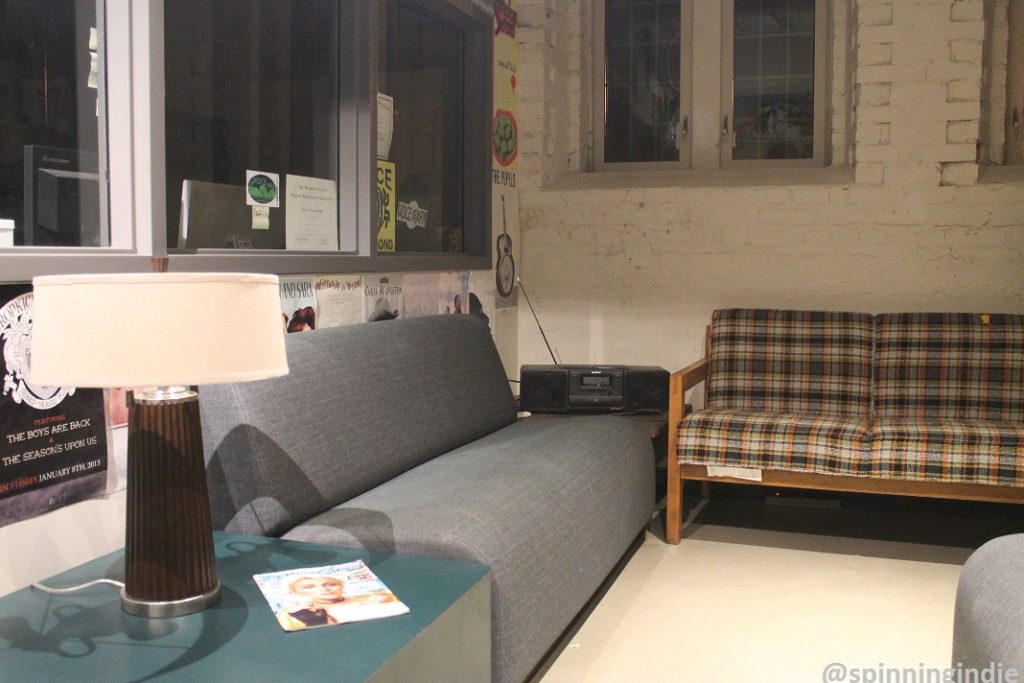 When I asked Schwartzkopf about the station’s overall programming philosophy, she opined, “When we turn our transmitter on for the day, we play a Shakespeare quote: ‘If music be the food of love, play on.’ I suppose that’s the closest thing we have to a unified philosophy. Music is an instrument for community, and WDCE is always striving to strengthen the University of Richmond through good, quality music.” 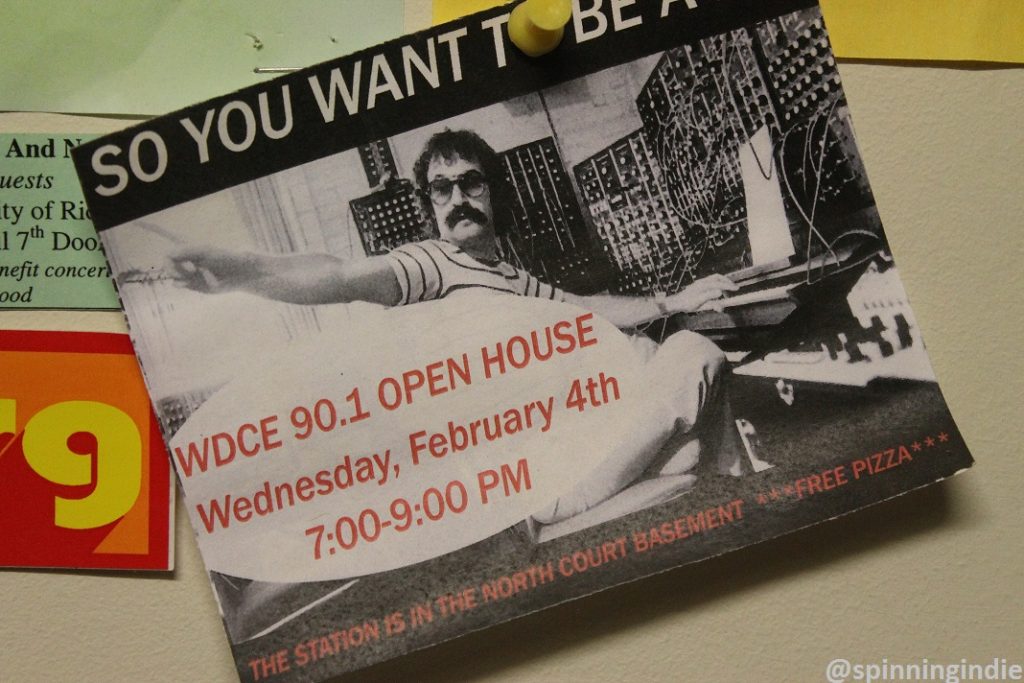 The station’s website mentions that WDCE has also hosted a number of live music events, stating that, “Over the years, WDCE has brought many concerts to the campus including DC punk legends Fugazi, indie favorites Death Cab For Cutie, and hip-hop veteran Masta Ace.” Schwartzkopf said, “We usually have one a semester. Sometimes we have two during the spring semester, when the weather is nicer. Our most recent was at the on-campus restaurant and bar, The Cellar. They are kind enough to give us their space from time to time. It’s a friendly, intimate venue, and we usually have one concert there per semester. The concerts often showcase two or three DJs [and] bands of diverse genre[s], and our larger concert this semester will also incorporate some bigger-name, yet still local, bands.” 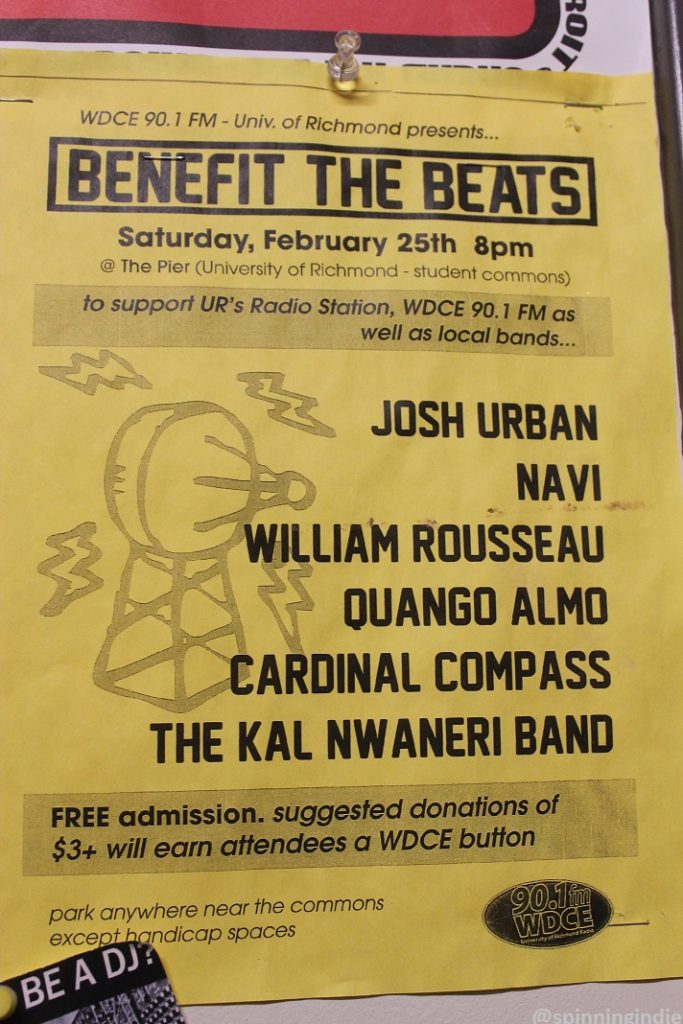 Flyer for a past WDCE event. Photo: J. Waits

In reflecting on the culture of college radio station WDCE, Schwartzkopf told me, “I love being surrounded by a community of people who are extremely knowledgeable about music. It’s a diverse group, and I never stop learning from them.” 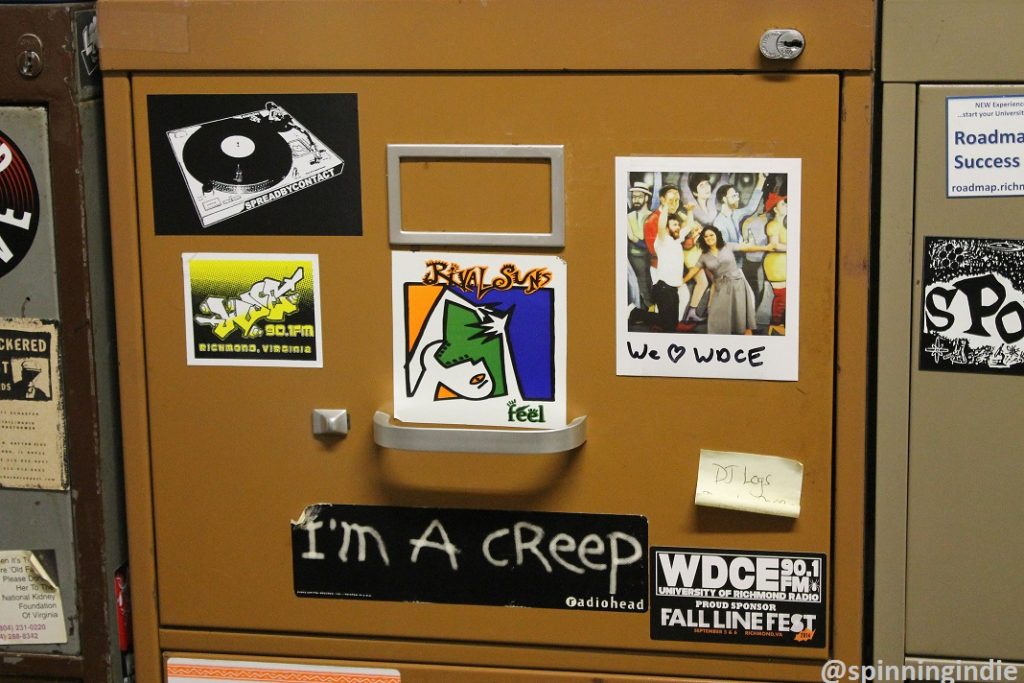 Much gratitude to Todd Ranson for the late-night tour and chat and to Sam Schwartzkopf for filling in the details about WDCE today. This is my 133rd radio station field trip report and my final Virginia tour from my March, 2017 travels. Still to come are recaps of my recent visits to radio stations in Philadelphia, New York, and California. My most recent field trips can be found on Radio Survivor and a full list of all my station tour reports is compiled on Spinning Indie.
Support from readers like you make content like this possible. Please take a moment to support Radio Survivor on Patreon!