While visiting New York City in February, I was glad to be able to visit Hunter College’s college radio station WHCS on the morning of Saturday, February 20. The station’s President and General Manager Sarah Settineri escorted me to the station (security on college campuses in New York City is pretty intense) and filled me in about its illustrious past. 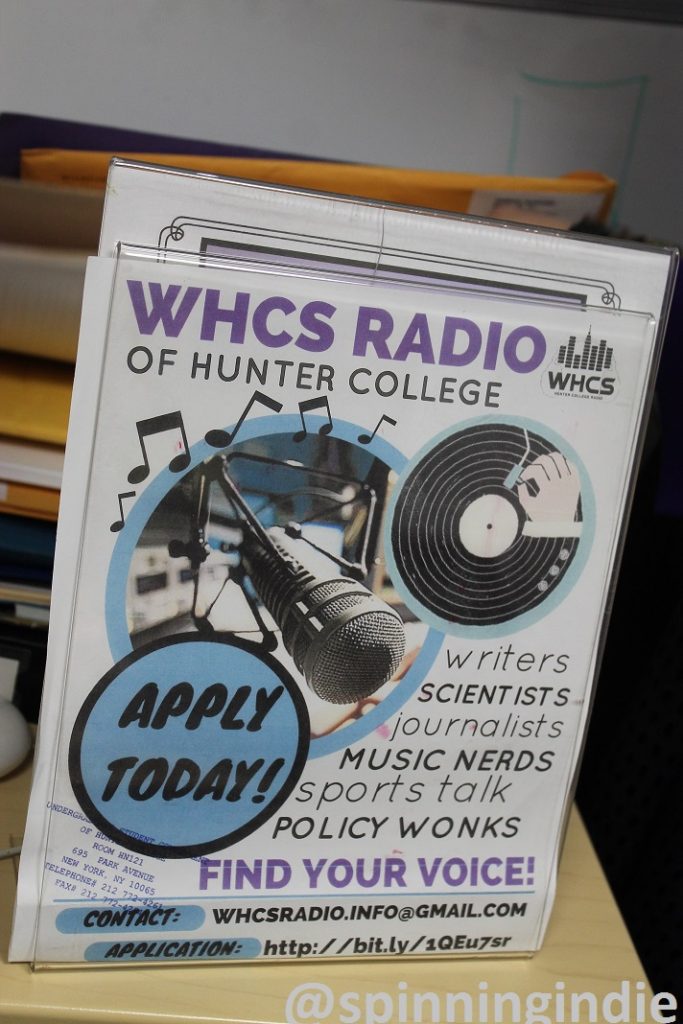 I had a hard time finding much information about the station prior to my visit, so it was a pleasant surprise when Settineri pulled out a stack of historical documents and artifacts before I’d even gotten my coat off. Although she didn’t have too many details, she said, “We know that the station is old.” She showed me a Jimi Hendrix CD from 1968, apparently from a live recording at Hunter (it’s unclear if the radio station was involved) and also shared that Chuck Berry was also rumored to have played there. Settineri had planned to do a radio show focusing on the history of the station, so was already quite interested in its history before my visit. 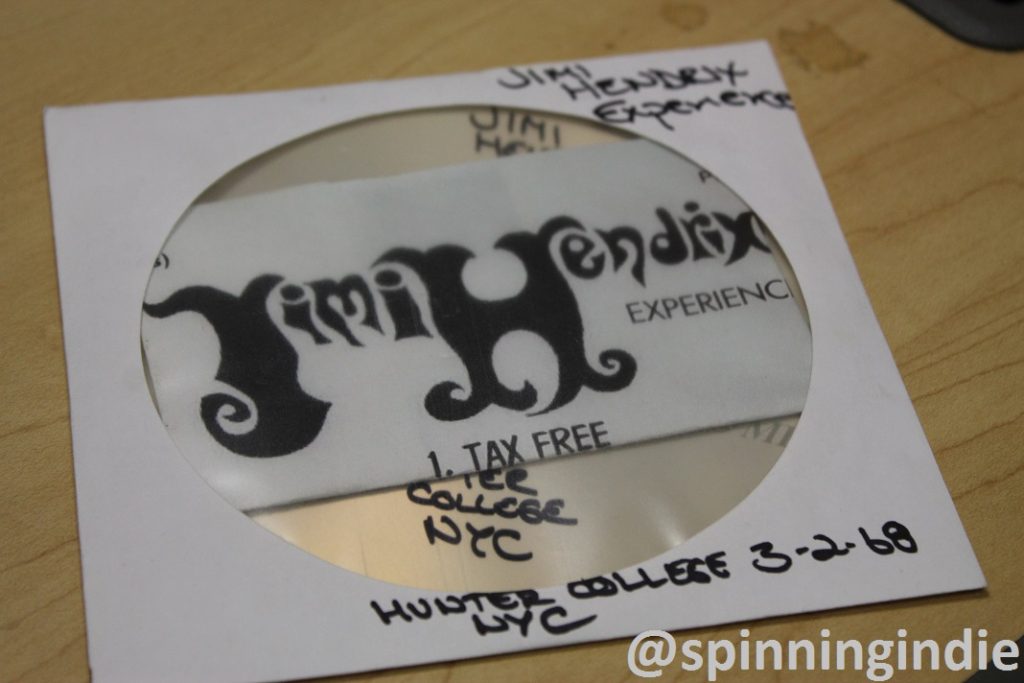 Some of what she uncovered included 1971 station blueprints as well as captions from a WHCS history exhibit. Through those captions, the story of various WHCS artifacts is told. One indicates that Hunter College launched a radio station in 1971, although I’ve found conflicting information about that, including blue prints suggesting that an existing station was to be remodeled in 1971. 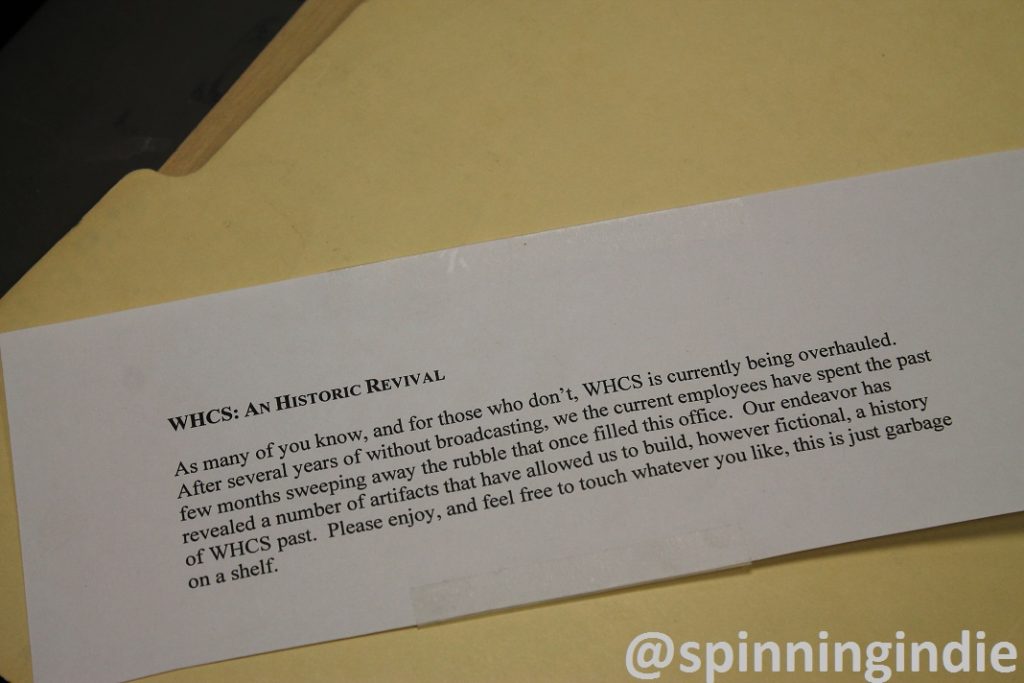 A large Intercollegiate Broadcasting System (IBS) binder has “I.B.S. 1971 Handbook” scrawled on it and the front of the book includes an inscription granting the handbook to “Hunter College Radio Station.” There were also a few file folders with material from WHCS predecessor WRFH, but it was still difficult to decipher the station’s history. Settineri agreed, saying, “A lot of it is shrouded in mystery.” 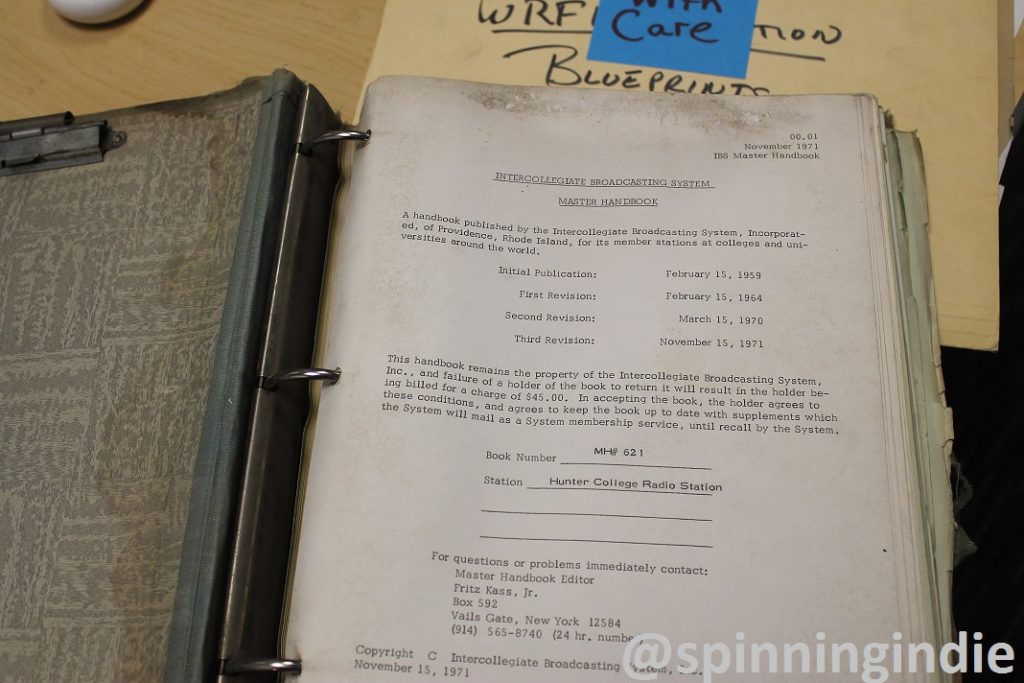 Looking through photos posted by the Hunter College Archives, I saw evidence of a radio class in the school’s Speech and Dramatics Department in 1948 and also spotted a 1968 staff photo of WRFH. There are some great photos of WRFH from the 1972 through 1980 college yearbooks, as well as others from WHCS and related to WHCS from 1986 (with the tagline “Hunter College Stereo”), 1987, 1991 and 1992. 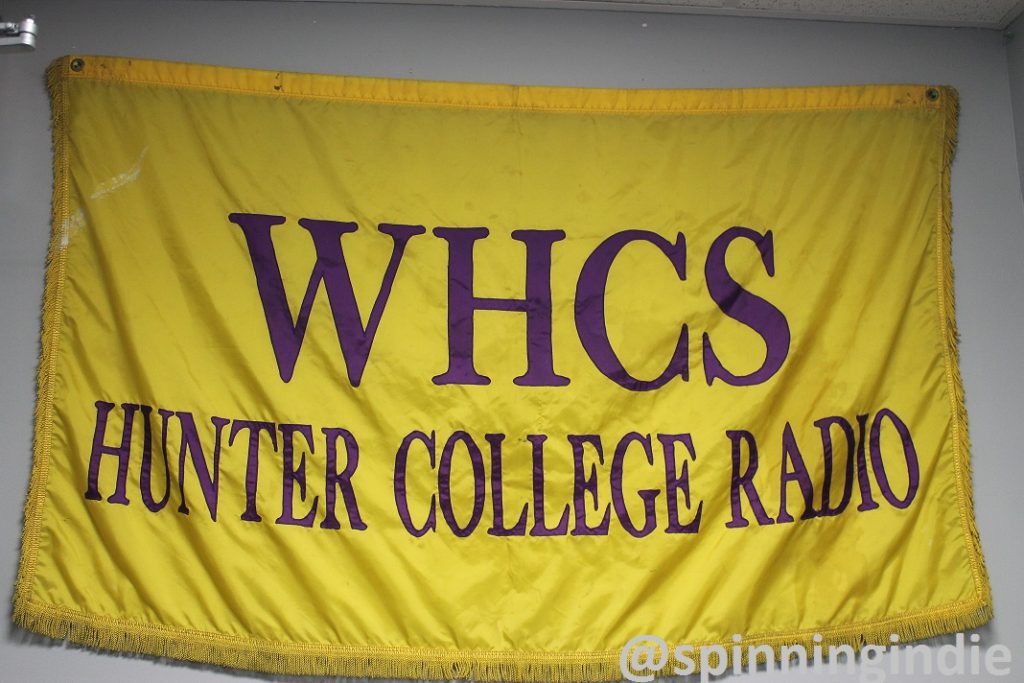 From what I could piece together, Hunter College has had radio stations under a variety of names, including Radio Free Hunter, WRFH, WLEX-AM (possibly in the late 1970s and early 1980s), and WHCS (sometimes affiliated with the phrase “Where Hunter College Speaks”). At some point the station broadcast on 590AM. 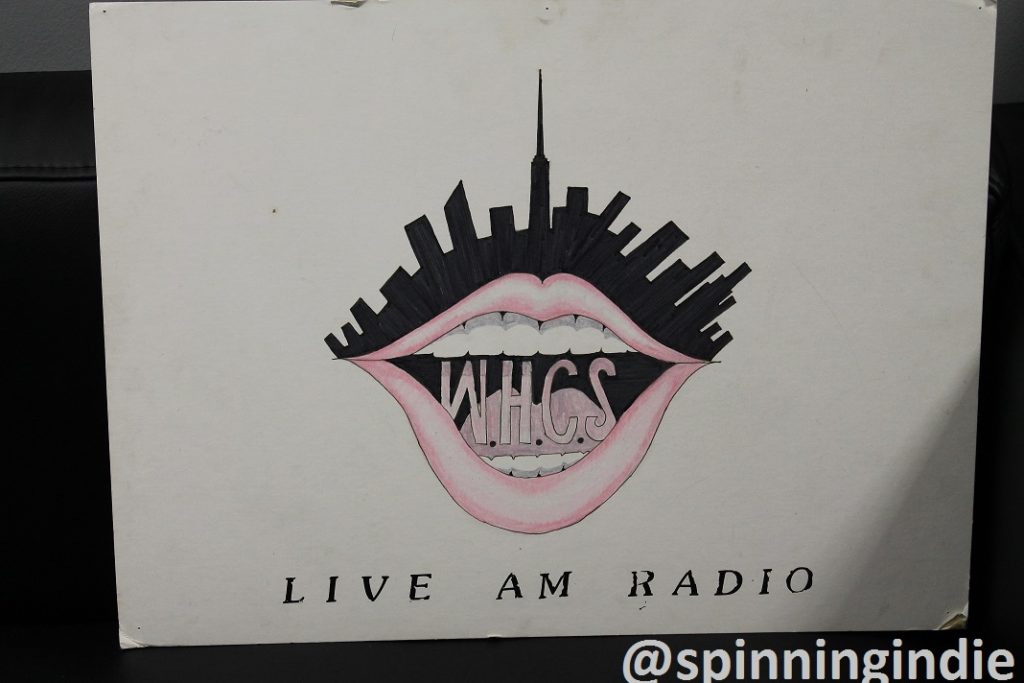 Old promotional sign at WHCS, alluding to its AM past. Photo: J. Waits

I was intrigued to find among the paperwork that Settineri showed me that the City University of New York (of which Hunter College is a part) was working towards creating a network of college radio stations in the 1970s. According to a 1971 letter from the Director of City University Radio, Peter Edelstein:

Interested members of our university have actively been planning to establish an FM radio station for the City University. Much has been accomplished but much remains to be done. WNYE-FM, owned and operated by the city’s Board of Education, has agreed to share its frequency with City University Radio and has already broadcast selected programming produced by CUNY Radio Network college affiliates.”

The 1971 letter called for not only an FM radio station that could cover New York City (a 50,000 watt station time-shared with WNYE-FM), but also for a college radio network. The college radio network was described as “consisting of the college radio stations (campus-limited radio clubs) at their respective campuses within the City University, and/or their communication department’s studio facilities, with the capacity of originating live programming for the FM station.” 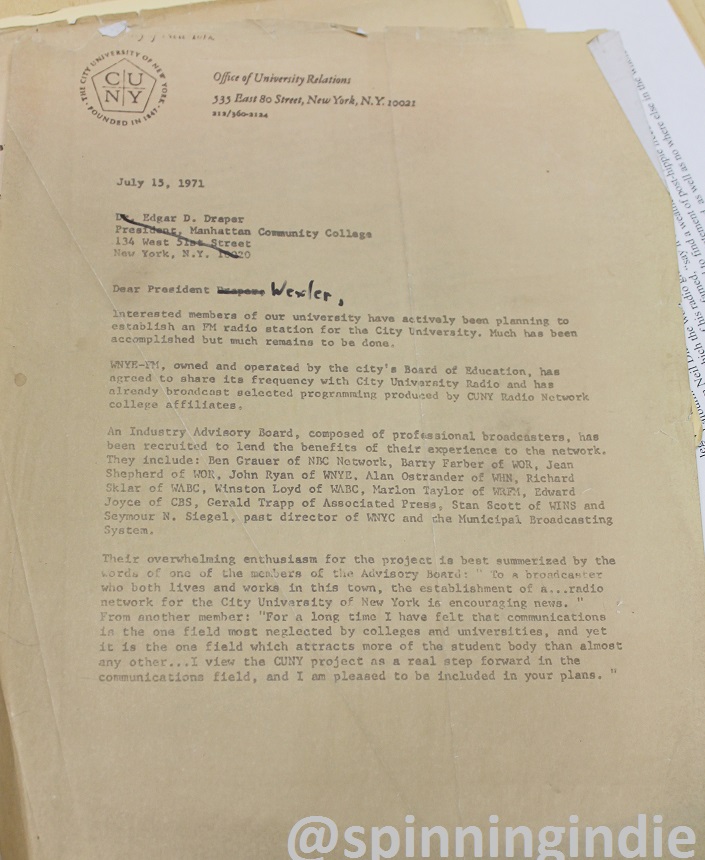 All of this was part of a broader campus communications plan. Edelstein writes, “A radio station with its broadest goal being public information about the university and its activities could only help. It would achieve the dialogue called for by the Henderson Commission (the Temporary Commission to Study the Causes of Campus Unrest) among students, parents and administrators of our colleges. It is the only feasible, day to day, basis for reaching all segments of the commuter population of your colleges, students and staff.” 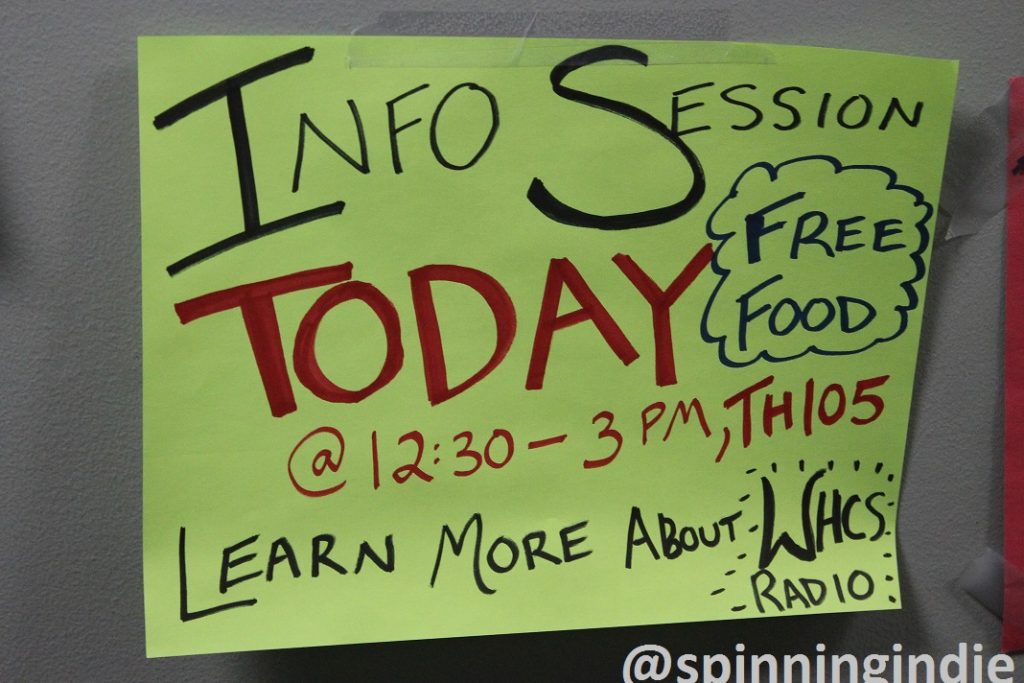 Hunter College radio alumnus Bob Goodman writes of this period (he was at Hunter College from 1970 to 1973), stating, “As a student I was elected General Manager of the campus radio station WRFH (Radio Free Hunter) at NYC’s Hunter College and 1 year later became Coordinating Director of Network Programming and one of the founders of the City University Radio Network.” It would appear that some aspects of the CUNY Radio Network still exist, with four participating stations. 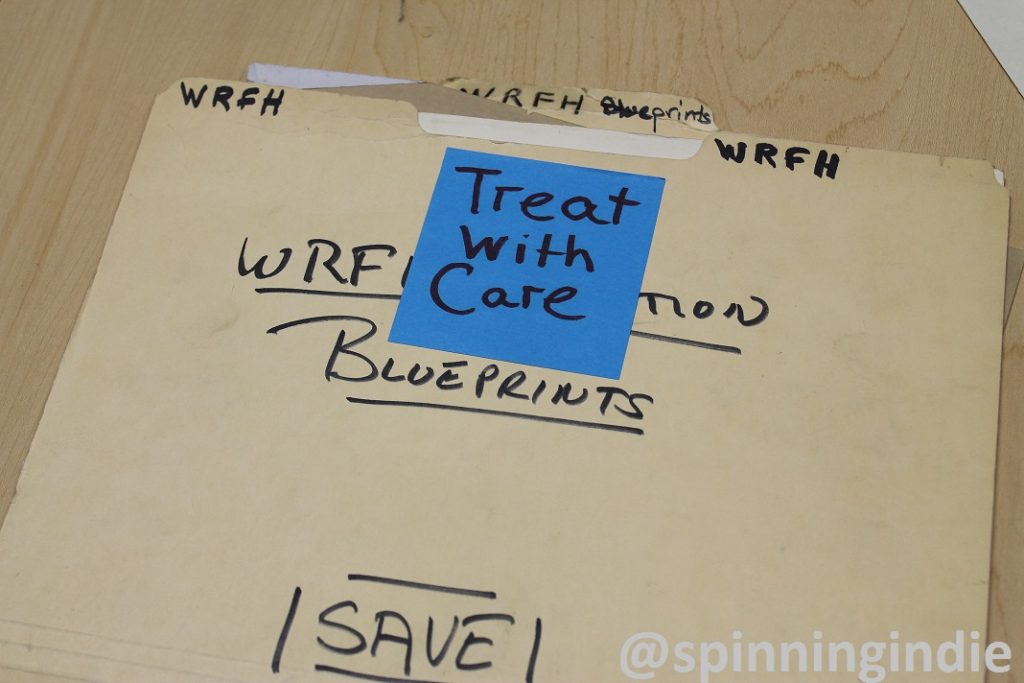 Flashing forward to 2016, the Hunter College Radio station has had its challenges. Although the small streaming radio station (it’s housed in a former table closet) is warm and inviting, it’s had a tough go of it in recent years. After a station move in 2013, WHCS was off the air for the entire 2013-2014 school year. Although Settineri has been with the station for 5 years, she was studying abroad during the station move. She characterized it as a “lost year” at WHCS, adding, “it feels like there were a lot of lost years.” 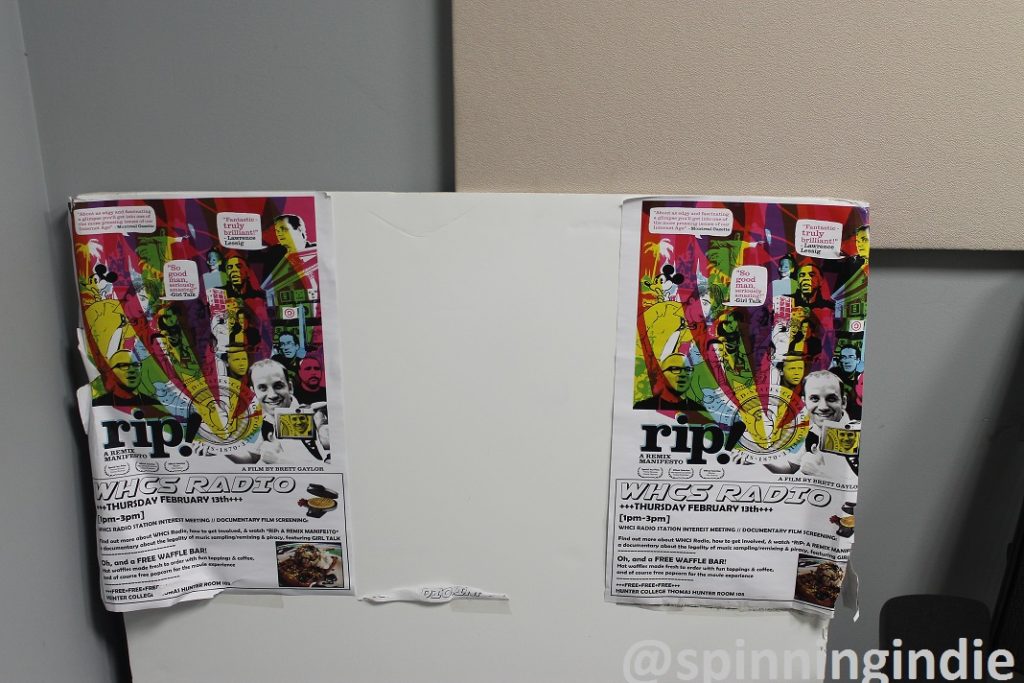 After the move, the station had ensuing problems, including damaged equipment, missing items, and soundproofing issues which were particularly vexing since the new location is next to a restroom (toilet noise was bleeding into their studio). 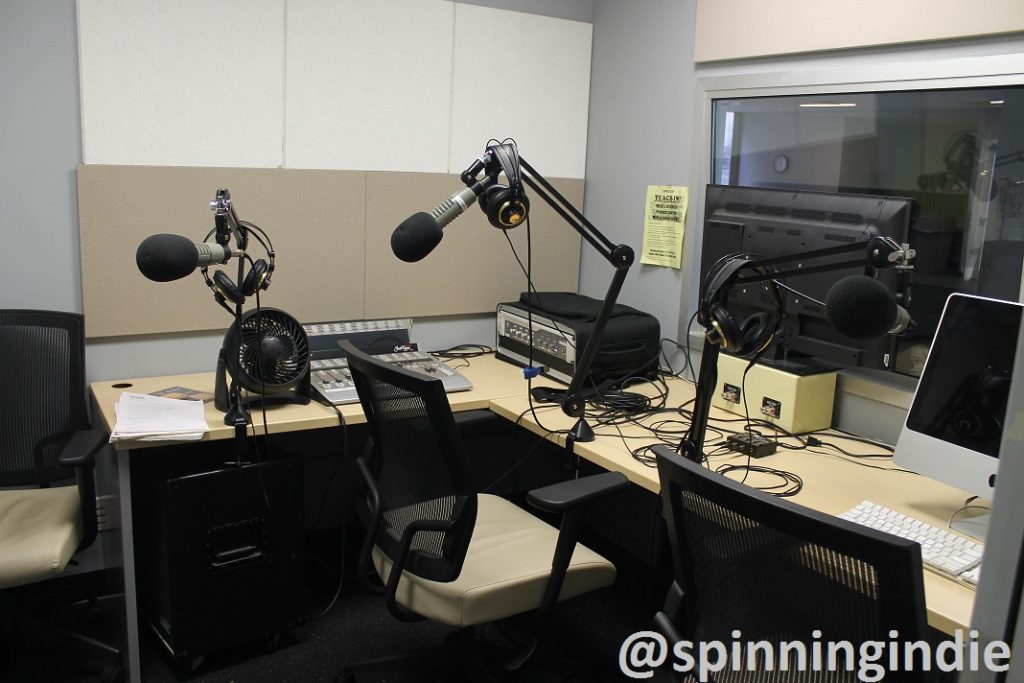 For perspective, Settineri showed me photos and walked me by the former WHCS home, which was in a larger, yet more secluded space. The old studios are now being used by the theater department for costume storage, but vestiges of the radio past are in still in evidence, as we saw station stickers on nearby walls as well as part of an old radio station sign outside the door. 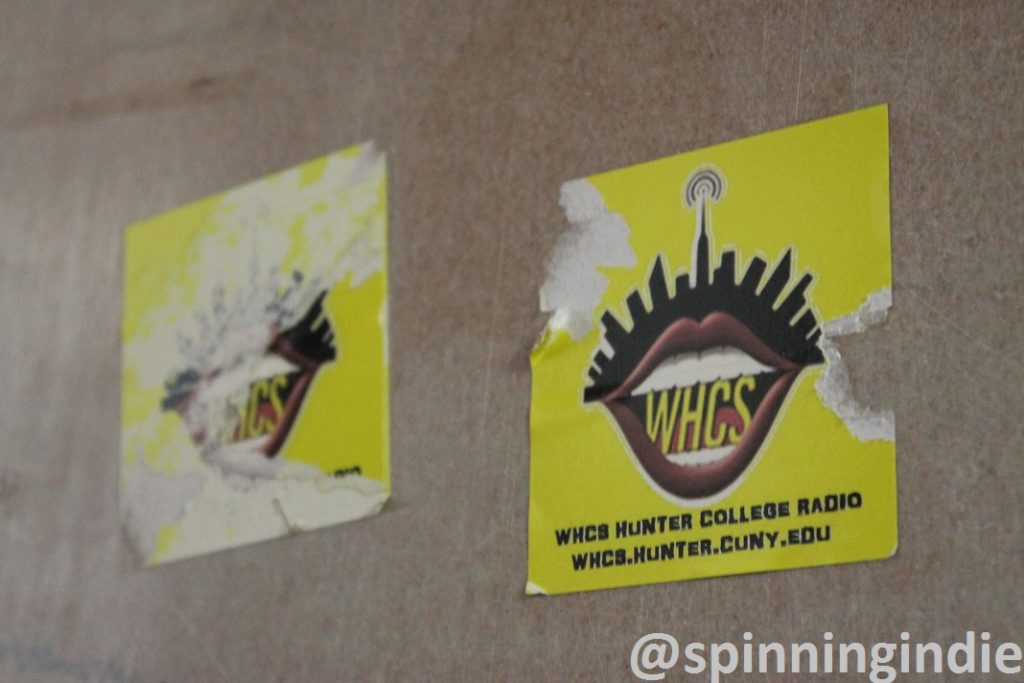 She told me, “It hasn’t been the easiest transition to this space,” saying, “it’s very sad…the space was much bigger.” At the time, WHCS was able to host meetings and movie nights in its studios, but after the move they’d have to request other campus rooms in order to do larger-scale activities again. 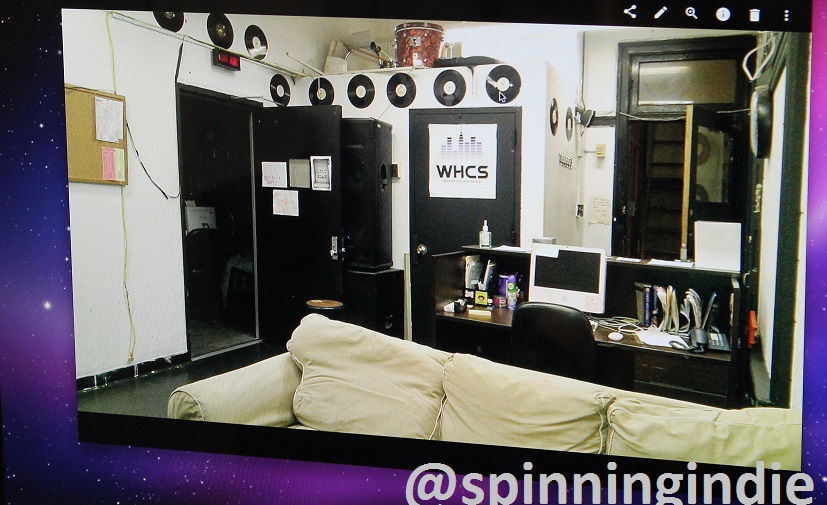 WHCS resumed shows in October, 2014. Settineri acknowledged that she’s the only person at the station now who was around when they had the old space and expressed pride in what WHCS continues to accomplish. Settineri said, “Students have dared to dream big, despite the limitations.” With that, she showed me a WHCS-produced zombie video that’s about the station coming back from the dead. 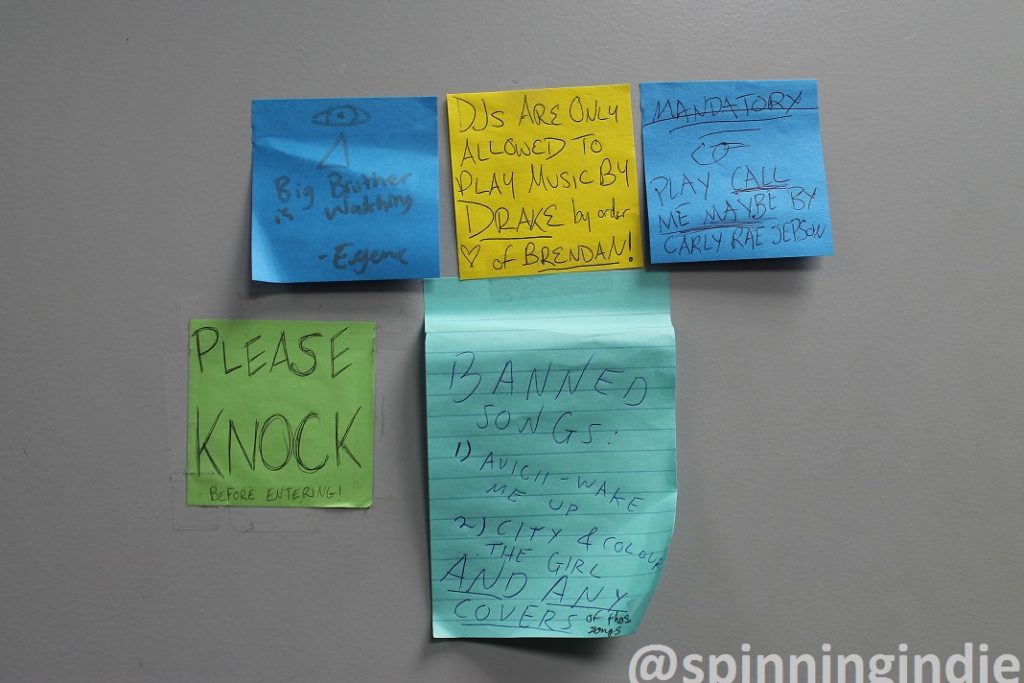 She also filled me in on some arcane semantics, explaining that they are not allowed to call themselves “Hunter College Radio” anymore. Instead, they can say: “We are OF Hunter College.” I was amazed to hear that because of this, some administrators have told them “Hunter College doesn’t have a radio station.” 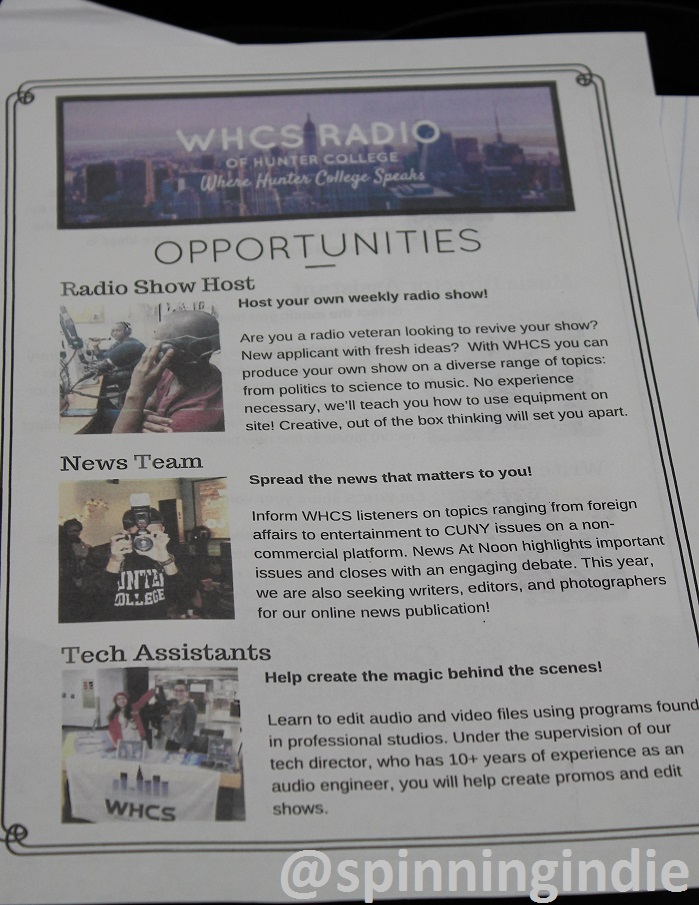 The station’s past is in evidence in its new home. Nestled next to a cafeteria space (the window of the on-air studio overlooks a a former cafeteria that’s now being used by the dance department), the station is comprised of a small lobby with a couch, desks, storage, a small closet, and the studio. The welcoming lobby has an entire wall covered with a bright arrangement of station LPs, including Wolfman Jack, Madonna, Elvis Costello, and Teena Marie. 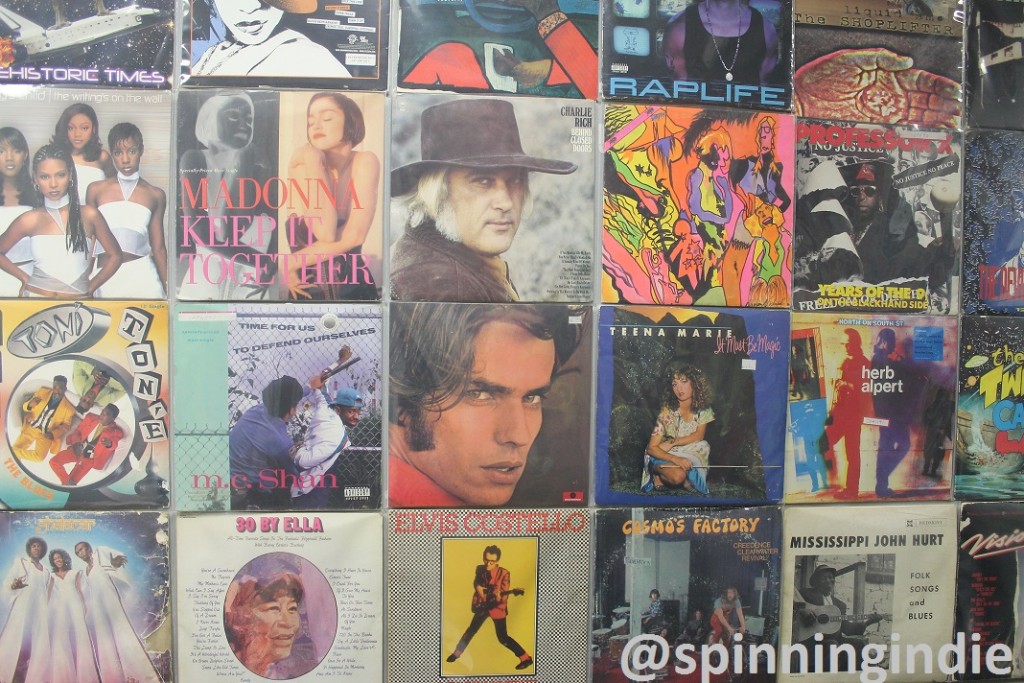 Album covers on the wall at WHCS. Photo: J. Waits

Another wall is full of posters and throughout the station I saw flyers for WHCS events, including some concerts with big-name acts. Settineri said that many station members prefer to work off-air and for that reason, they have had quite a few WHCS-crafted videos and flyers. 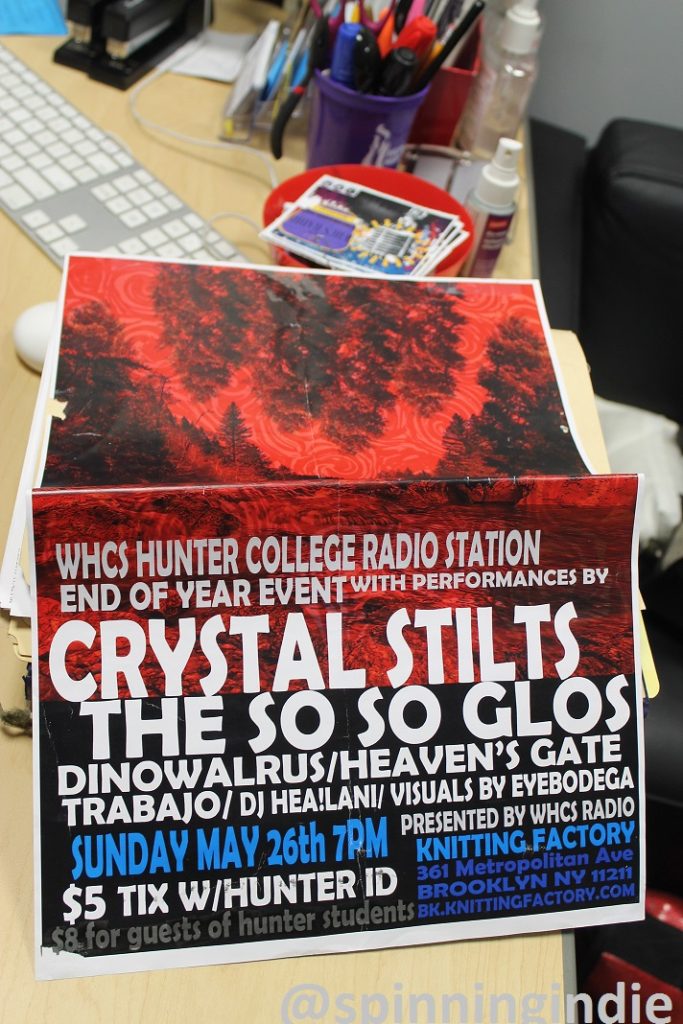 Others work as technical assistants and on the news team (there’s a “News at Noon” program). Programs at the station include music and talk shows, including the satire talk show “Everything Sucks,” “Game Over” (gaming news), “DWB” (aka Discussion While Black), and “Cops and Cookies.” Some of the music shows include “All Synths Considered” and “Heavy Metal Power Hour.” Settineri said, “the music varies so much” and “changes every year.” 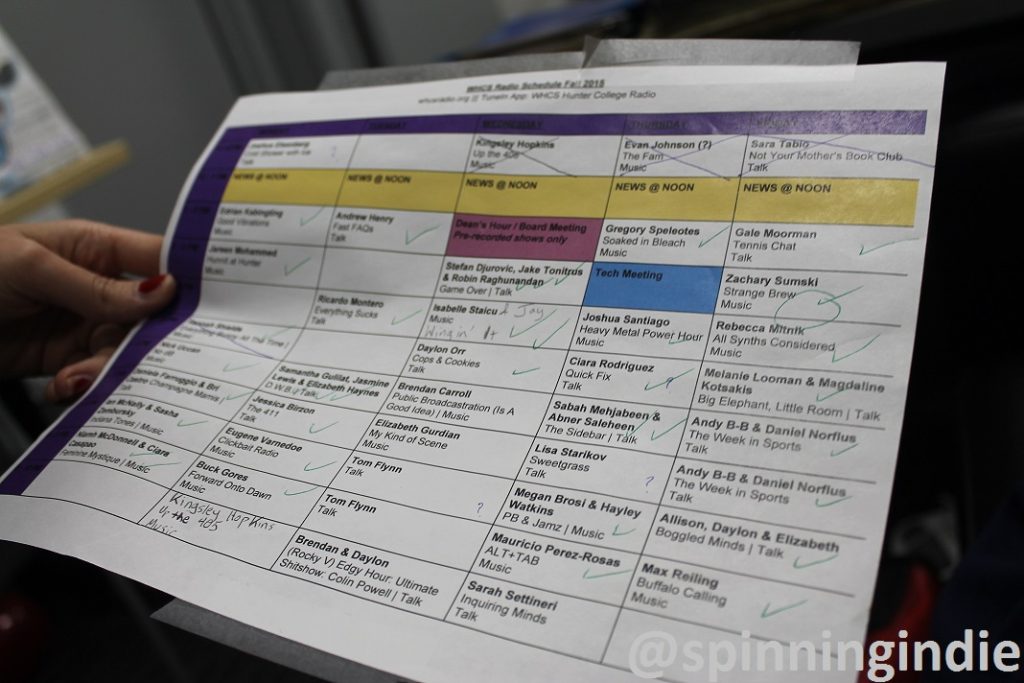 Settineri told me that the student-run station is funded by student activity fees and is specifically viewed as a “service for students.” It’s not affiliated with a department and doesn’t have a faculty adviser. WHCS staff members are elected, usually at the end of the Spring semester. The station runs 24 hours a day, 7 days a week, although live shows tend to occur between 11am and 10pm on weekdays mainly because the building closes. 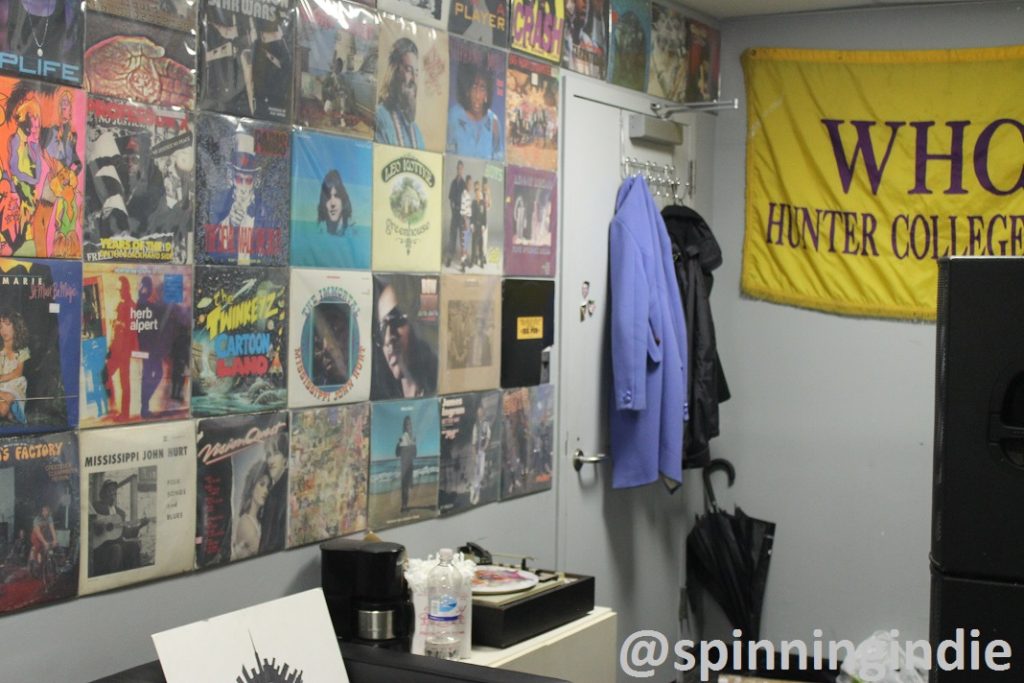 In addition to students, some faculty members, Hunter College staff, and alumni have had shows on WHCS; it varies from semester to semester. There are semesters when more than 60 students have put in requests for time slots and Settineri said that there were around 30 to 50 station members involved at the time of my visit. Hunter College is largely a commuter school, which can make for a broader, more diverse mix of students; but also for long travel times for some (she has a 45 minute commute). 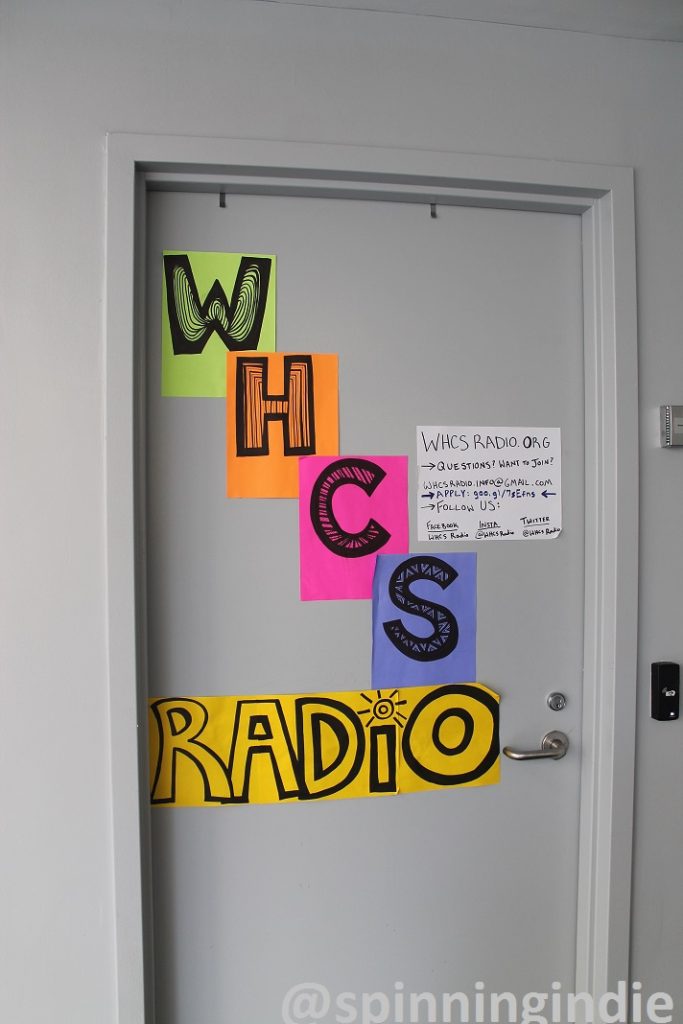 As Settineri’s time at Hunter College was soon drawing to a close (she’s a senior), she was already expressing wistfulness about WHCS. She told me that many students have told her that they didn’t feel like they had a community at Hunter College until they joined WHCS, adding, “It became my home away from home” and “has been a major part of my life the past few years.” 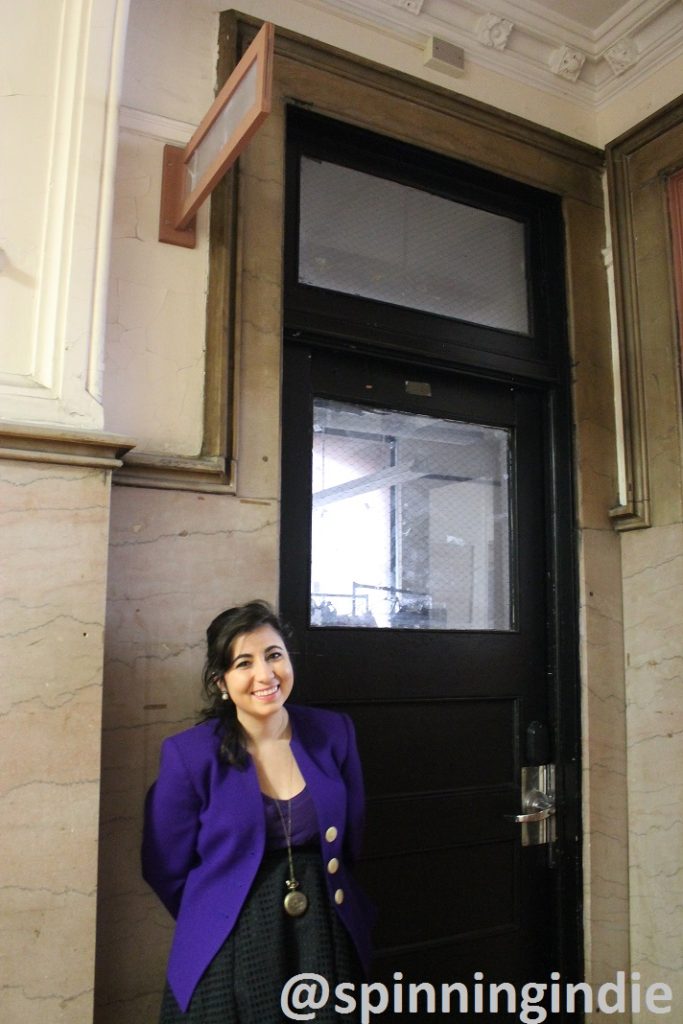 Sarah Settineri in front of the former home of WHCS. Photo: J. Waits

Big thanks to Settineri for not only taking the time to show me around WHCS on a Saturday, but also for sharing historical artifacts with me. I was so taken with her enthusiasm for history that I encouraged her to attend the Library of Congress’ Radio Preservation Task Force conference. It turned out that she was planning to be D.C. that same weekend; so she showed up, bringing Hunter College radio artifacts with her. I couldn’t have been more thrilled. 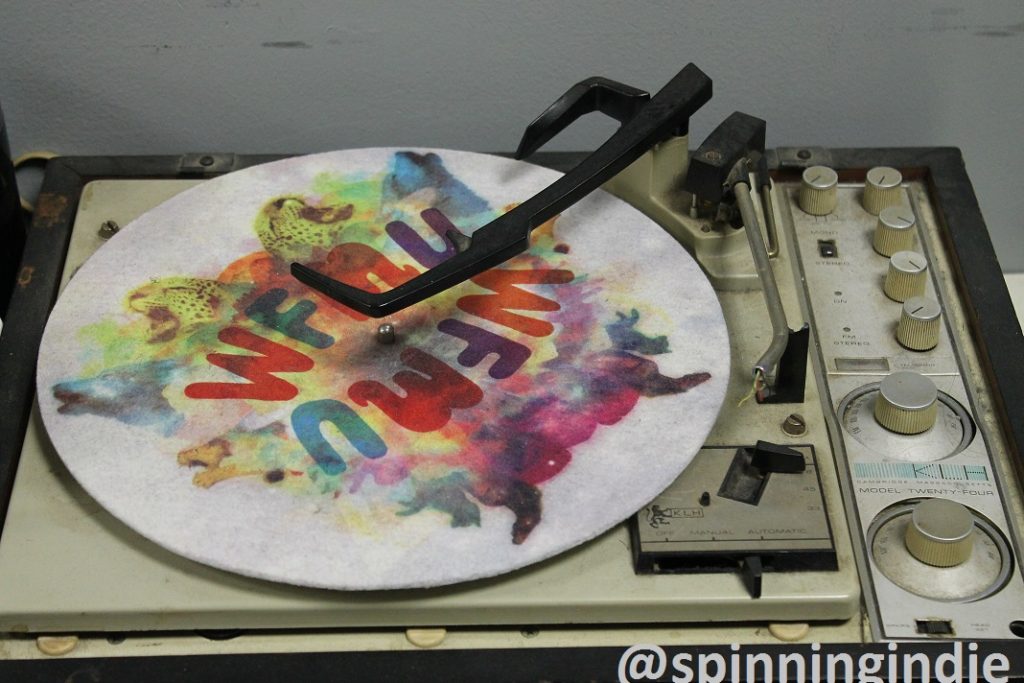 This is my 99th station tour report. It’s hard to believe that my 100th tour is coming up next. You can see my most recent field trips on Radio Survivor and read all of my station tour reports on Spinning Indie. 7/26/16 Update: Hear more about this tour on Episode #47 on the Radio Survivor Podcast. And…for another glimpse at WHCS, here’s a short video that was filmed in late 2015:

Define a Space: WHCS Radio of Hunter College from Hayley Watkins on Vimeo.