I’m still thinking back fondly on my trip to Minneapolis and provided a run-down of the College Broadcasters Inc. (CBI) conference in this week’s Radio Survivor Podcast. As a bonus, I also shared some highlights from my visit to college radio station KUOM (aka Radio K), including audio tidbits from my tour through the record library and Studio K. Tune in at around the 46 minute mark for my College Radio Watch feature, but, really, it’s worth listening to the entire podcast!

Speaking of Minneapolis, on Wednesday, I posted another radio station field trip report from my visit to the Twin Cities. Just south of Minneapolis, KRLX-FM at Carleton College in Northfield, Minnesota is the descendant of some pioneering college radio stations on campus and I was thrilled to be able to check it out.

Come See Us at CMJ’s College Day on Tour in Portland, Oregon Tomorrow

Both Paul Riismandel and I are speaking at CMJ’s College Day on Tour in Portland, Oregon, tomorrow (Saturday, November 7, 2015). At 11:30am, I’ll be taking part in the “The Big Question” panel about the state of radio in 2015 and Paul will be leading a roundtable discussion at 12:30pm on the topic of “Leading a Station.” If you are attending the event, please stop by and say “hello.”

Finally, while at the CBI conference I met someone from the Rice University radio station KTRU who told me that not only does the station have the ubiquitous Leo Blais sign (part two of my interview with Leo Blais will be running soon), but that it also has its own tradition of radio station sticker art. Thanks to Mike Hua for sharing some KTRU station photos that capture the wide array of altered stickers. 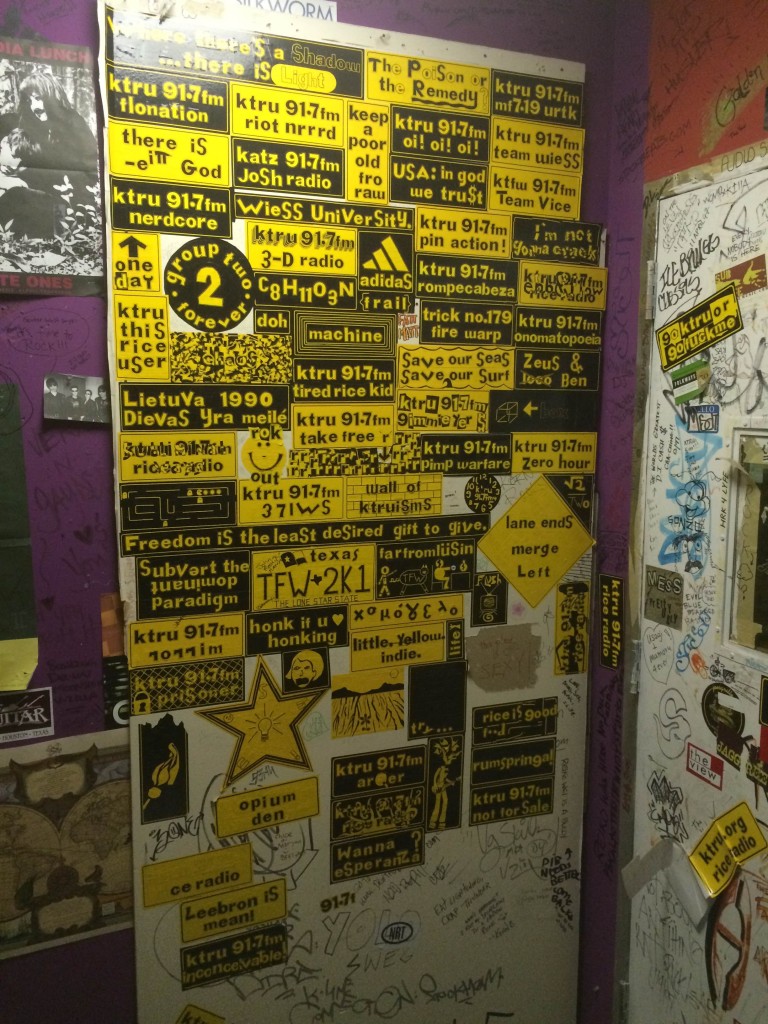 For me, it’s reminiscent of the old yellow and black KOME radio station stickers from the San Jose, California radio station. Like the KTRU stickers, KOME stickers were printed with both yellow and black backgrounds, so crafty kids would use exacto knives to carve a collection of stickers into a new piece of art. I haven’t seen that sort of sticker art in recent years, so would be curious to hear of other radio station stickers that are regularly manipulated. Please share your thoughts on this and other college radio topics in the new Radio Survivor Forums.

Q&A with GM of KDUP

In advance of its first regional College Day in Portland, Oregon (this Saturday, as mentioned above), CMJ posted an interview with someone from one of the local college radio stations participating in the event. Jack Greenwood, the General Manager of University of Portland’s college radio station KDUP weighs in on how the station has grown in recent years. I actually met Jack when I stopped by KDUP back in 2013 when he was a freshman just starting out as a DJ at the station!

Moorpark Acorn reports that the launch of streaming radio station KMCJ coincides with a new class in radio and podcasting at the Moorpark College campus in Moorpark, California.

Looking Back at the History of WUMB

The Mass Media chronicles the origins of University of Massachusetts, Boston’s radio station WUMB, stretching back to Halloween, 1968.

According to the Eye Opener, a college radio station at Ryerson University in Toronto, Canada, CJRU 1280 AM the Scope, is getting a head start on financing thanks to a pool of money from student levies related to the former campus radio station CKLN (which left the air in 2012).

Back to the Future Parody at the ‘Burg

Nikki Marra wrote to let me know about “Burg to the Future 2,” a radio drama produced by students at Central Washington University’s college radio station KCWU, which aired on October 21st. Listen to the piece, which parodies the film Back to the Future 2.