During my trip to Seattle in October, 2014 for the College Broadcasters Inc. conference, the third station that I visited was UWave at University of Washington, Bothell. Currently an online-only station, UWave is also the holder of a construction permit to build a new low power FM college radio station. 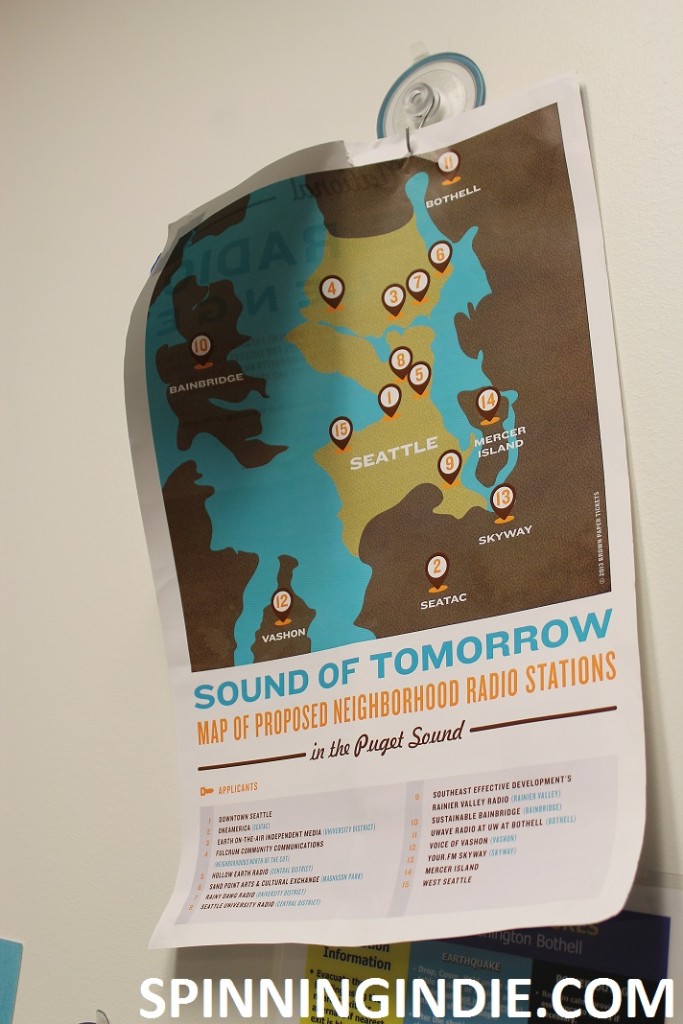 Seattle is a hot bed for LPFM activity and I managed to see three local stations that have construction permits for new LPFM radio stations. It was pretty inspiring to find that so many Seattle groups applied for LPFM licenses. In fact, in honor of World Radio Day on February 13, an event will be held at Seattle Public Library to celebrate the 12 new LPFMs in the Seattle area (plus the two others that are pending approval). 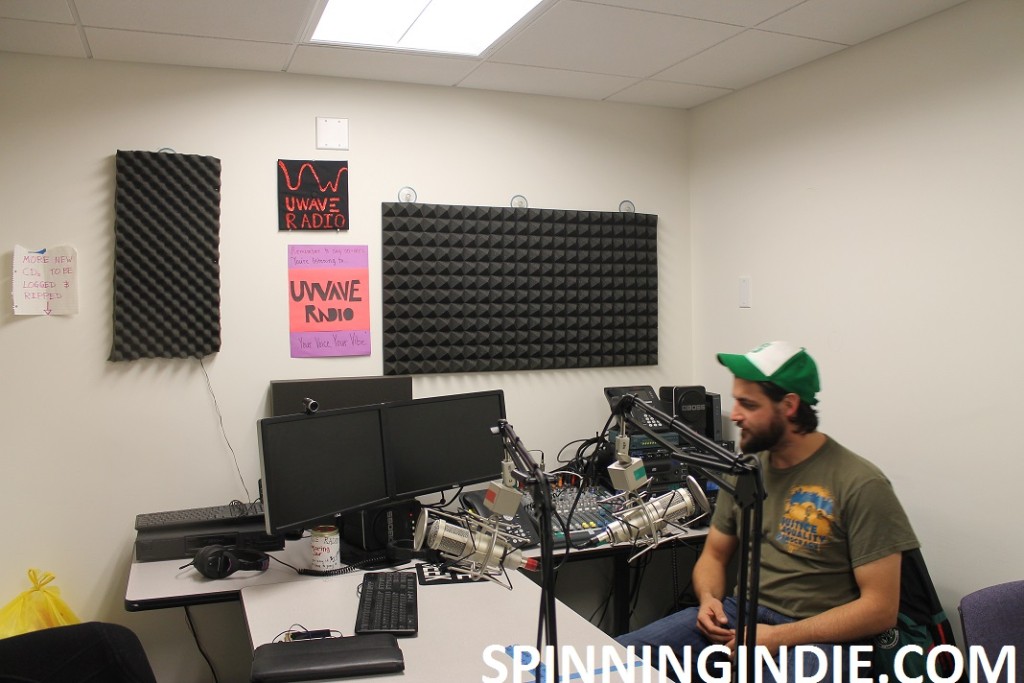 I trekked north of Seattle to see UWave on October 22, 2014, after having toured KEXP and Rainy Dawg Radio earlier in the day. UWave DJ Justin McMahon met up with me to show me around the station. When I arrived, he was in the midst of a news meeting in a large room near the UWave studio (the space is shared with another student organization). McMahon is clearly passionate about news and public affairs and shared with me that the station’s news department had just launched earlier in the quarter. He told me, “it has exploded,” and said that “a lot of people want to do the news” at UWave. 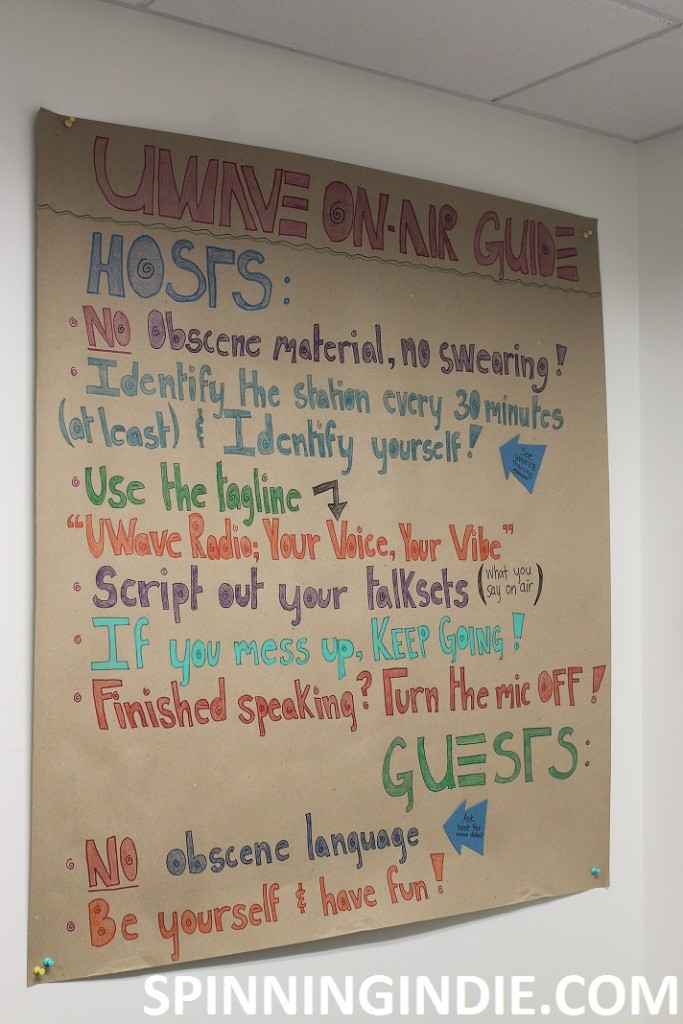 UWave is a relatively young station, having launched as a streaming radio station in spring 2013. McMahon said that there were around 15 to 20 people volunteering at UWave, with 12 programs on the schedule. The station plays a mix of music, news, and sports shows. During the semester that I visited, there was a metal show and British music show among the offerings. When there isn’t a live DJ, UWave airs repeats of programming and a mix of music. 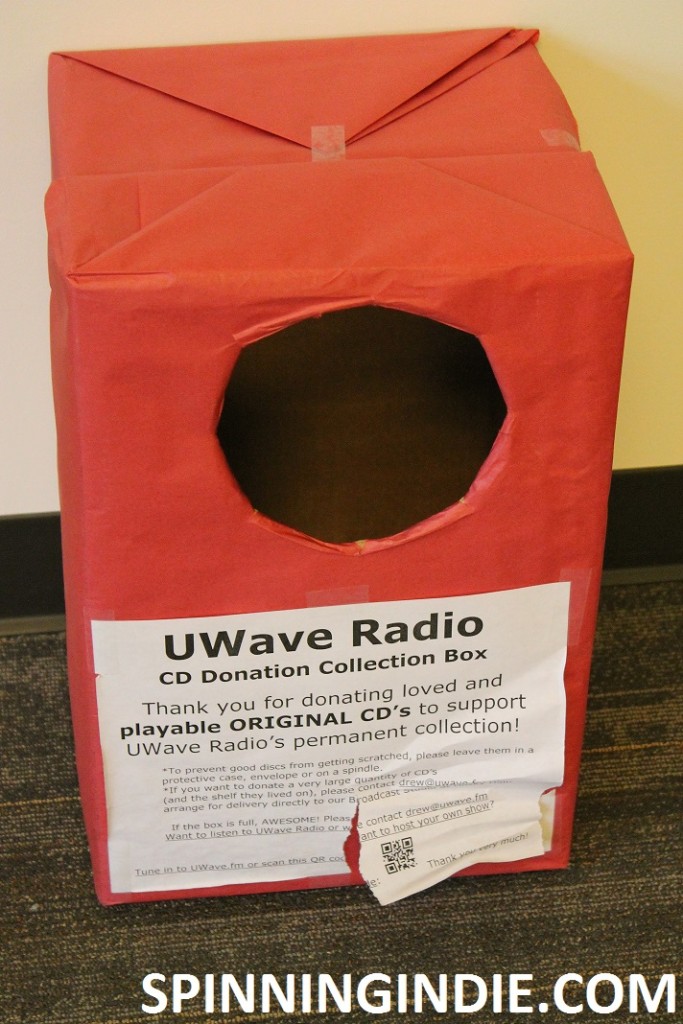 For the most part, DJs are playing digital music on their shows and UWave has a database full of music. The station also held a CD donation drive in order to acquire more music and as a result of that, it was able to begin digitizing the collection of several hundred CDs. There aren’t too many rules at UWave, but I was interested to see that they have a “Swearing Jar” devised to encourage DJs to refrain from using foul language over the station’s stream. While UWave doesn’t currently have to abide by FCC rules, I would imagine that it is doing its best to train DJs now, before the station holds an FCC license. 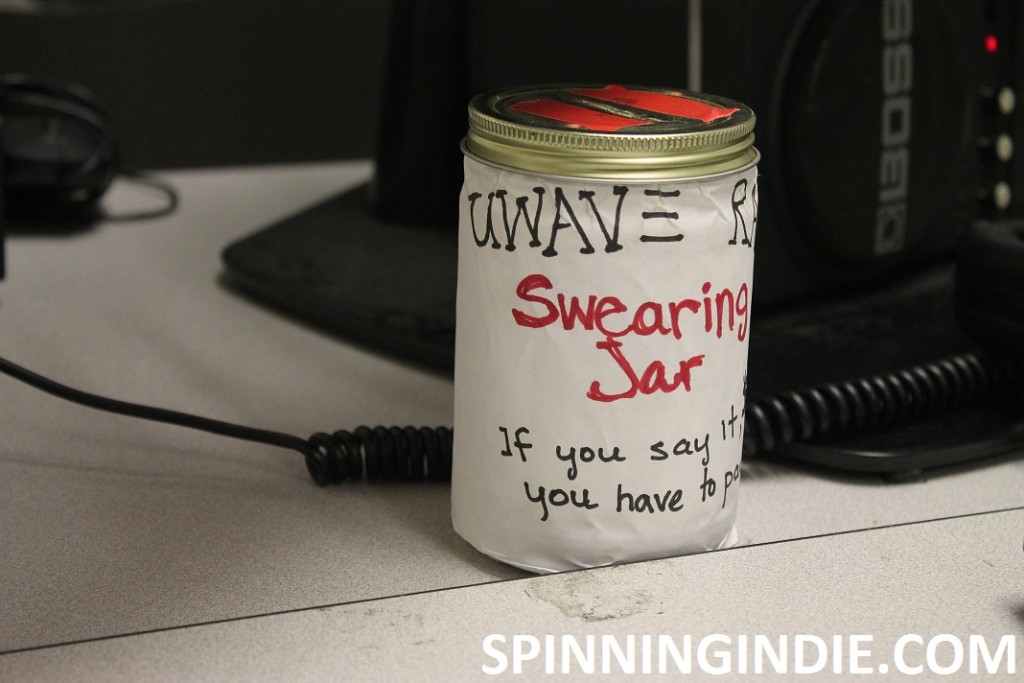 Although it’s primarily University of Washington, Bothell students at UWave, McMahon told me that there are also some DJs from Cascadia College (which shares the campus). He expected that when UWave begins broadcasting over FM, it will grow and will probably attract non-student DJs and volunteers. Because the station uses student funds (since it’s a student club), it’s required to be open to students from both schools. 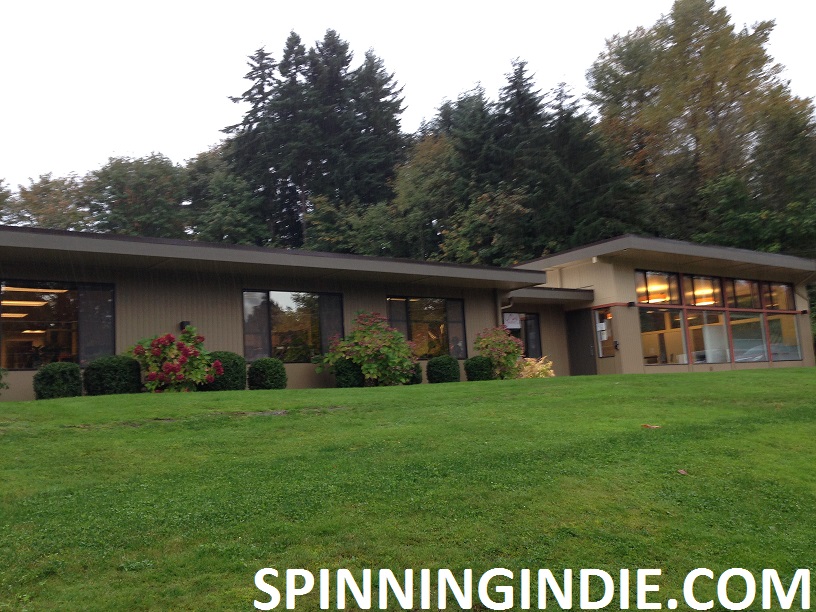 Housed in Husky Hall, which closes at 6pm, UWave is a bit off the beaten path, past the main part of campus. Although the building closes early, DJs can apply to get permits to have access to the building in order to host nighttime shows. 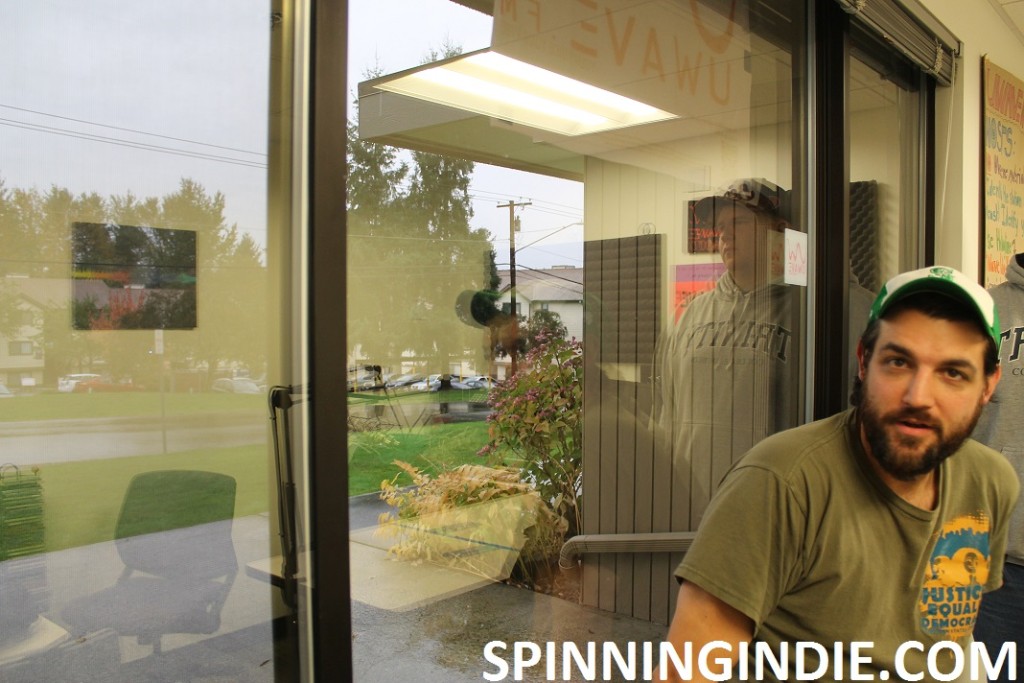 Justin McMahon in front of the entrance to UWave. Photo: J. Waits

Thanks so much to Justin McMahon for showing me around UWave. I look forward to hearing more about the station as it moves to FM. 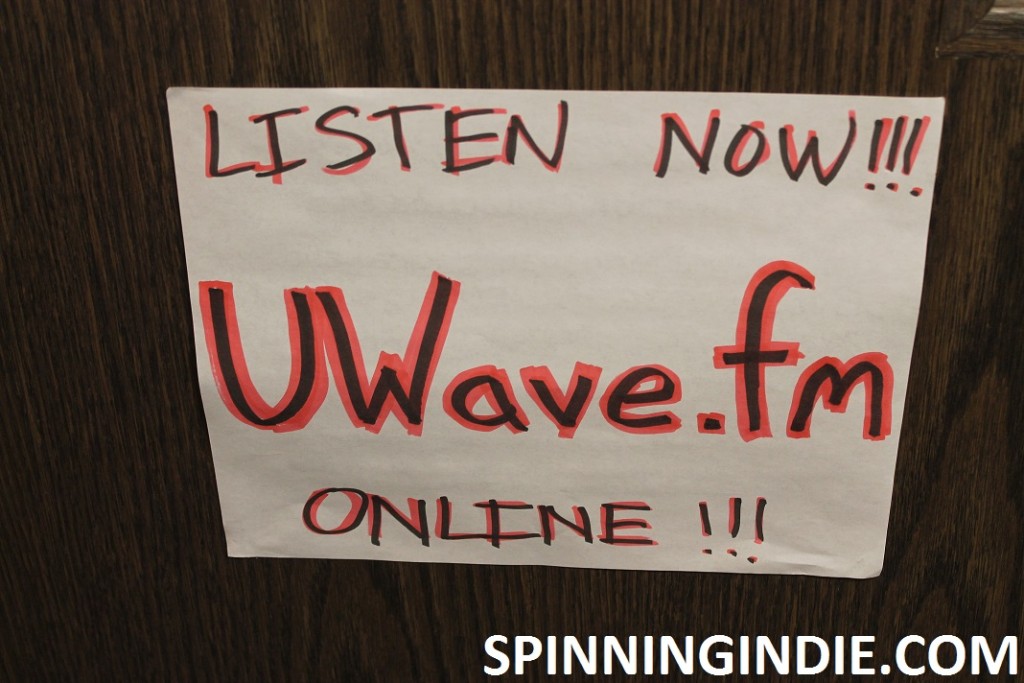