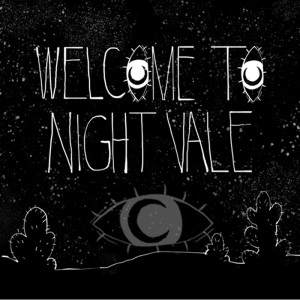 Welcome To Night Vale, soon to embark on their first European tour, has just released their fifty-first episode, “Rumbling”. After a drawn out corporate conflict, a mayoral “election”, and some reconstruction, the little desert burb of Night Vale has finally returned to a state we could dubiously call normal. Indeed, many facets of the show seem to have shifted back to their former, pre-Strexcorp states. After almost twenty episodes with consecutive themes of Strexcorp attempting to conquer Night Vale politically, economically, and supernaturally, the return to the one-odd-crisis-per-episode format is a welcome relapse for listeners (such as myself) that had been chomping at the bit waiting for the dramatic conclusion that finally came last month.

The latest episode, perhaps in a deliberate nod to the need for relief to fans that had been hyped up by such a long plot arc, was a cute, easy-to-digest Cecil and Carlos episode. Carlos, circumstances having forced him to wander the alternate dimension desert that preserves phone battery and reception, has been spending much of his exile exploring and trying to understand the still-unexplained parallel phenomenon and its constant rumbling. This comes much to the pain of Cecil, whose only connection to Carlos is the rare phone call, and the couple struggles to manage what now seems to be a long-distance relationship. Cecil has also become concerned with (if not outright jealous of) Doug, a masked warrior that is helping Carlos survive in the mysterious desert.

Creators Joseph Fink and Jeffrey Cranor have stated on various occasions that they take the writing of the relationship seriously. For those of us that have had to cope with long distance relationships, the realistic blend of paranoia, optimism, fear, and faith is much appreciated. Then again, many fans also seem to be holding out for phone sex, so perhaps I’m getting too cerebral about all of this.

As is to be expected, WTNV fanblogs have reacted with extreme excitement and enthusiasm, Cecil and Carlos still holding its position as Night Vale’s most popular subplot. Somewhat less concern seems given to Dana Cardinal, former Night Vale Community Radio intern and newly elected mayor, whose short-lived platform of change found itself extinguished by the City Council. After calling for an open dog park, Mayor Cardinal had a “talk” with the City Council, and then began warning citizens and their dogs to continue staying out of and not thinking about the dog park.

Although many fans seem upset and surprised, the political cynic in me can’t help but feel smugly satisfied in my own pessimistic predictions having come to fruition. After all, Night Vale just spent months fighting change tooth and nail, starting an outright rebellion against a new order. Night Vale mayors also have a long history of being executed for attempting to exercise any sort of executive authority (Episode 24), so, if anything, merely brainwashing Mayor Cardinal could be considered progressive, in a very morose sort of way.

Overall, the old adage “the more things change, the more they stay the same” keeps coming back to me as the proverbial dust after the battle with Strexcorp begins to settle. Pretentious wordplay aside, I as a fan am ultimately pleased by the turn for the same Night Vale is taking. Even though I enjoy long and involved stories (I’m a fan of Dune and Homestuck, if that tells you anything), the Strexcorp arc was beginning to feel arduous, even tedious in a few places, and I am eager for more episodes that are similarly slowed down. The next episode is due August 15th. I’ll be waiting.