By Paul Riismandel on April 2, 2013 in Fun Stuff, Pirate Radio 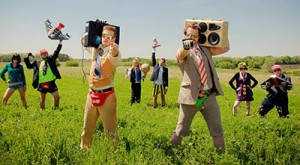 Last year we posted about the Decentralized Dance Party’s appearance at SXSW. The DDP uses a low-power unlicensed FM transmitter worn in a backpack, instead of a PA, to broadcast dance party music in public places to participants carrying boombox radios all tuned to the same frequency. Project founders Tom and Gary call it “The Party Revolution,” because they have thrown 52 free parties across North America where anyone can participate, without the kind of problems people often expect from large crowds. Plus, they’re dressed in banana suits.

On their website’s FAQ, DDP says their goal is

"to further the frontiers of Partying, bring joy to millions of people and ensure that Partying is respected, legitimized, and forever enshrined as a cultural institution of paramount importance.

They define “partying” as

“Forgetting Who You Are While Remembering What You Are," or, “The Complete Loss Of The Social Conditioning That Makes Adult Life Monotonous And Depressing.” (sic)

DDP made another appearance at SXSW this year, but as part of its Kickstarter campaign to fund a documentary movie titled “Another Night, Another Dream.” Co-founder Gary Lachance is also a filmmaker and has recorded over 600 hours of footage since the first party four years ago to edit into the final film. In addition to a conventional linear narrative, the finished film will feature hundreds of annotation links allowing the viewer to jump to additional footage and material. DDP is looking to raise $25,000 by April 12 in order to finish the film.

However, finishing the film is just phase one of their larger project. When the film premieres in the fall of this year DDP will start phase two, which they’re calling “The Global Party Pandemic of 2014.” That’s whey they plan to start 192 simultaneous Kickstarters in order to bring a Decentralized Dance Party to every country on earth.

They even hope to bring parties to places experiencing social unrest, such as the DMZ between North and South Korea, and the Middle East. Each country that successfully funds a Kickstarter will host a DDP. In order to make sure poorer countries are not left out, funders will be able to contribute to any country’s Kickstarter, not just their own.

It’s certainly an ambitious–and idealistic–project that may attract more scrutiny and governmental suspicion once DDP leaves the familiar grounds of North America. As much as I admire their passionate embrace of radio and partying, I’m not sure I share their naïve-seeming faith in the power of dance parties in the face of real political oppression. But, perhaps that ultra-rosy outlook is the point, an answer to cynics (like me).

Nevertheless, as I observed before, it’s a great example of radio’s power to inexpensively bring people together, in the tradition of Tetsuo Kogawa’s radio parties in the 1980s and the Italian autonomist movements of the 1970s.

Even with advancements in mobile data and cell phone technologies it would be difficult or impossible to pull off this kind of party using mobile devices. If you didn’t saturate all the local cell towers, you would end up with a glitchy music stream, full of delays putting adjacent devices maddeningly out of sync. Of course, taking DDP across the globe using mobile technology would be more expensive, with different countries having different standards and widely variant support for data. Radio, on the other hand, works anywhere you can bring a transmitter and a receiver.

Learn more about DDP’s history in this Wired story about DDP in the January issue.

What should college and community radio tell the FCC about its indecency rules?
Citing budget cuts BBC & Voice of America cut back shortwave broadcasts
Support Radio Survivor on Patreon!