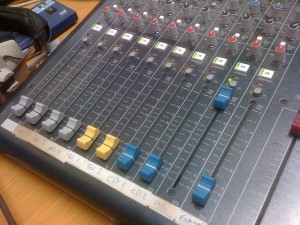 Board at Belfield FM in Ireland (Photo: J. Waits)

As the calendar turns to November, many of us are starting to think about holiday gift lists. There are always lots of great radio-themed gifts to choose from and books are often at the top of my list.

. Edited by Janey Gordon, the book features an incredible array of scholarly articles about community radio from all over the world (including Britain, the Philippines, Uruguay, the United States, Bangladesh, East Africa, Hungary, South Africa, Laos and China).

Not only does it provide a nice history of community radio (particularly in cultures where community radio is a new endeavor), but it also addresses topical concerns (mobile phones, LPFM, Local Community Radio Act, etc.).

Additionally, I was pleased to see that college radio had good representation in the book. Nick Rubin’s piece, “Music Based Community Radio as Alternative Media,” takes a look at not only the role of college radio in alternative music culture, but also explores how a call for programming changes at WTJU at University of Virginia (which we also wrote about on Radio Survivor in 2010), divided a community. When “proposed changes sparked widespread outrage among WTJU volunteers…and listeners” it became clear that people were afraid that “WTJU would lose its oppositional status” to mainstream culture.

The book concludes with a piece by Janey Gordon, “The Role of University Radio in the Development of Community Radio Stations: A History.” Gordon explores the early beginnings of radio on college campuses and delineates the difference between “campus radio” and “community radio.” She writes, “Campus, college or student radio may be thought of as a radio station running on an educational campus or within the site and premises of that establishment.” Examples of this might include low power AM stations at schools, prisons, and hospitals in the United Kingdom. College radio stations with a “community radio” orientation broadcast to a larger area, perhaps on full power FM (such as 107 Spark FM and Radio LaB 97.1 FM in the UK). Gordon acknowledges that “the United States model of radio broadcasting for the community is somewhat more complex with a greater variety of licences being issued to university based radio stations and with various commercial, public, community and college radio stations all broadcasting from university sites.”