By Jennifer Waits on February 8, 2011 in College Radio, Localism 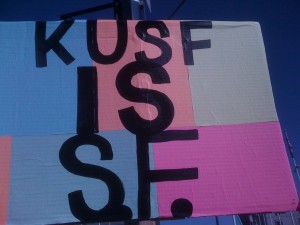 Right now supporters of KUSF are heading into City Hall in San Francisco, anticipating today’s 2pm Board of Supervisors’ meeting, in which a resolution opposing the sale of University of San Francisco’s college radio station KUSF is expected to be voted on.

Although the city government of San Francisco can’t halt the proposed sale of KUSF’s license to Classical Public Radio Network, supporters at Save KUSF are hoping that this resolution will help to encourage University of San Francisco to reconsider the deal.

Yesterday the University of San Francisco Faculty Association adopted a similar resolution and is asking for University of San Francisco to halt the station sale. In the resolution, the faculty association points out the educational role that the station held on campus, arguing that “…KUSF has served as a location for teaching, mentoring, internships, and workshop experiences for thousands of USF students and alumnae over the years, as well as a resource for faculty seeking a wider audience…” and that:

“…KUSF 90.3 FM is a public trust and community asset that serves as an extraordinary educational tool, provides access to vital information to those who otherwise won’t have it, promotes local and independent music, and is immensely valuable to the people of San Francisco and integral to the fabric of our city, and the loss of KUSF would have a very negative impact on San Francisco’s eclectic and prolific local music, arts, and social justice communities…

the University of San Francisco Faculty Association requests USF to cancel the sale of KUSF 90.3 FM and offer members of the San Francisco community the opportunity to obtain the 90.3 FM license and KUSF name to keep it a San Francisco run non-commercial educational and community station; and BE IT FURTHER RESOLVED that the USFFA urges the Federal Communications Commission to reject the transfer of the broadcast license of KUSF 90.3 FM to a Los Angeles company until the community is first given a chance to keep KUSF on the air in San Francisco.”

Today’s San Francisco Board of Supervisors’ meeting begins at 2pm and can be viewed live online. You can also watch the past couple of meetings (in which the KUSF resolution was discussed), see agendas, and meeting minutes on that same page.

Complete Radio Survivor coverage about the proposed sale of KUSF can be found here. I also wrote about my reaction to the KUSF shut down on Spinning Indie.  My article chronicling my KUSF field trip 2 years ago is housed there too.