By Jennifer Waits on January 18, 2011 in College Radio 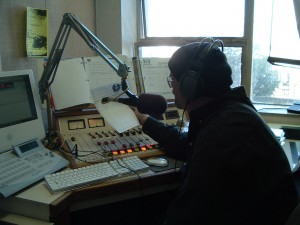 KUSF DJ before they all got locked out...

There’s a chilling account on the Bay Citizen blog which reports what happened this morning at 10am when college radio station KUSF was taken off the air at University of San Francisco.

DJs reported that suddenly they heard static and were soon escorted out of the station by when KUSF DJs recount what happened when the station was taken off the air at 10am today. People in suits converged on the station and the locks were changed in order to keep out KUSF DJs and volunteers. According to Bay Citizen,

“University spokesman Gary McDonald affirmed that USF had kept information about the station’s sale — which was a $3.75 million dollar deal — quiet, but said that two of the four fulltime workers did know about it.

Discussions, he said, had been taking place for the past few months. ‘The papers were signed on Friday,’ McDonald said. He cited confidential legal reasons as the cause of USF’s silence to their volunteers. While the format change, from radio broadcast to online-only, is obviously the largest change, McDonald also pointed to other transformations in the works. ‘We are going to refocus the station on its primary piurpose as a teaching lab for students,’ he said, ‘We are looking at ways to enhance curriculum in digital media.'”

A meeting is planned at 7pm tomorrow night at Fromm Hall at University of San Francisco and prior to that people are invited to gather on campus to protest the sale of KUSF’s terrestrial license to Classical Public Radio Network. More details can be found on this Facebook event.