By Jennifer Waits on October 13, 2009 in College Radio, Public Radio 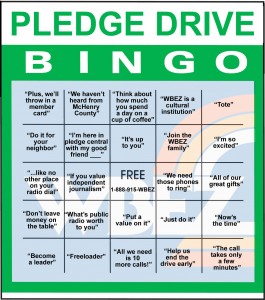 Fundraiser season continues at non-profit radio stations all over the country. Princeton’s station WPRB (apparently the oldest FM college radio station in the country, founded in 1940) ends their week-long fundraiser tomorrow. My own station KFJC (turning 50 next week) is pitching for cash until the station reaches its goal. And, Chicago Public Radio station WBEZ is also pimping for dollars.

One of my favorite things to do during fundraiser time is to listen to public radio and make fun of the horrificly long and boring breaks, in which hosts rattle off lists of thank you gifts and sponsors. So, I’m actually pretty impressed that WBEZ realizes the degree to which these breaks have become predictably mundane and has decided to make fun of itself.

The WBEZ blog has a bunch of fundraiser-specific content, including DJ trading cards and a pledge drive bingo. You can follow along at home and yell “BINGO” when an announcer utters words and phrases like “tote,” and “join the WBEZ family.” Those who score BINGO are invited to comment on the blog. Unfortunately it doesn’t seem like their listeners actually have a sense of humor about the fundraiser, as the only comments thus far are complaints about the “incessant prattle” and the programming decision to drop “Talk of the Nation.”

Have you heard anything on the radio that makes you want to listen to an on-air fundraiser? What makes you turn the dial?

One step closer for Low Power FM
A Latent Radio Hidden in Your iPhone?
Support Radio Survivor on Patreon!