By Jennifer Waits on May 7, 2012 in Religious Radio 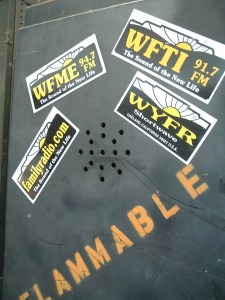 A year ago I was growing increasingly fascinated with Family Radio as they became the center of a media frenzy over their President Harold Camping’s predictions of global catastrophe on May 21, 2011. Billboards promoting their Judgment Day pronouncements were present all over the world and Camping’s live call-in talk program, “Open Forum,” ratcheted up its program schedule and at one point was on the air every night of the week.

When I visited Family Radio’s headquarters on May 12, 2011, the place was buzzing with activity and the studios were filled with not only supporters (some of whom had traveled from across the country in advance of the “rapture”), but also with reporters from several media outlets. Although many of the staff were vocal about their support for Camping’s Judgment Day predictions (evidenced by either what they said or by their May 21-themed T-shirts and caps), I also heard quiet grumblings to the contrary.

Camping has obviously had to backtrack quite a bit after the world failed to erupt in a series of rolling earthquakes on May 21, 2011. And he had to again issue some statements of apology when his final end of world prediction for October 21, 2011 did not materialize.

Although Camping’s regular on-air gig at Family Radio ended following Camping’s stroke in June, 2011; he has continued to issue a series of written and audio announcements since that time. In March he stated that Family Radio would no longer be in the business of predicting a date for Judgment Day and true to that word, his most recent message, dated April 27, 2012, makes no mention of the rapture or Judgment Day, and instead focuses on the importance of spreading the word about the Bible. He ends the message by saying, “May God see God’s mercy upon Family Radio. He has blessed us for over 50 years and he is still blessing us with faithful listeners and supporters, with beautiful Godly music, with good messages that we air and so on and with a faithful staff. Indeed we have so much for which to be thankful to the lord.”

Behind the scenes, Family Radio has been making some changes to its station roster. As we’ve reported, they’ve sold off some of their higher value radio stations located on the commercial end of the dial. Their Philadelphia-area station WKDN, now owned by Merlin Media and known as WWIQ, began its post-Family Radio life by playing Sean Hannity programming for 24 hours a day, much to the disappointment of former Family Radio listeners. Today, WWIQ introduced its new talk format featuring not only Hannity, but also Glenn Beck. The new WWIQ website states, “The New IQ 106.9 FM is the Delaware Valley’s new home for Sean Hannity and Glenn Beck. Hidden beyond the reach of big government and corporate media in an abandoned power plant in Fishtown, IQ 106.9 is fair and balanced, not live and liberal.”

WFSI in Maryland was also sold off and is now owned by CBS. It’s rumored that more sales may be in the works, especially after long-time Family Radio Station WFME in Newark, New Jersey requested that the station be converted from non-commercial to commercial status. That request was granted by the FCC in February. Both WKDN and WFSI were converted to commercial stations prior to being sold to their new owners.

High School Radio Day Set for May 16
John Malone may not have Sirius XM, but he still has a media empire
Support Radio Survivor on Patreon!