My marathon day of Seattle radio station visits last October launched with a trip to see high school radio station KNHC-FM aka C89.5. As I approached Nathan Hale High School in my rental car, I tuned in to the dance music station while delighting in the dramatic Pacific Northwest scenery: dark grey skies and vibrant fall foliage. 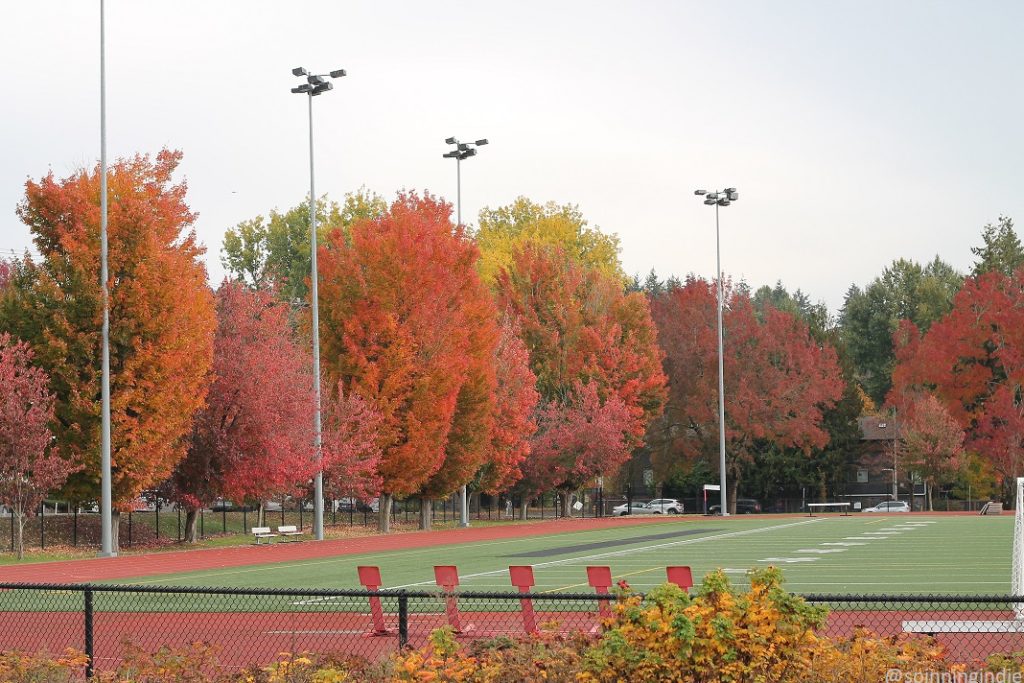 While listening to the morning show, I heard chatter about “Lap Day,” and later learned that as part of the on-air fundraiser, station staff agreed to run a lap around the school track for every $1,000 raised. I was amazed to hear that the morning show brought in $9,000 that day, meaning that the whole morning staff agreed to run 9 laps! A dedicated donor even stopped by to run with them for the final hour of the show. 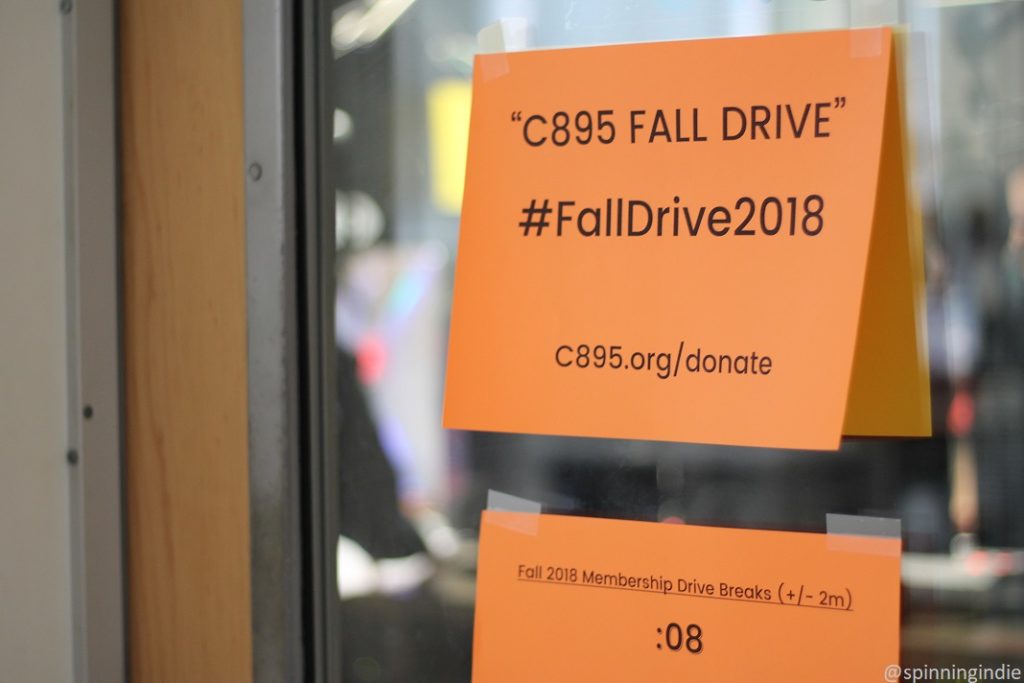 Fundraising is a big deal for KNHC, which holds two on-air fundraisers a year as well as an end of the year online campaign. Overseen by a small paid staff, C89.5 is run by professionals who manage day-to-day operations and guide the student participants. There are around 17 volunteer hosts in addition to the more than 100 students who take part in station activities. 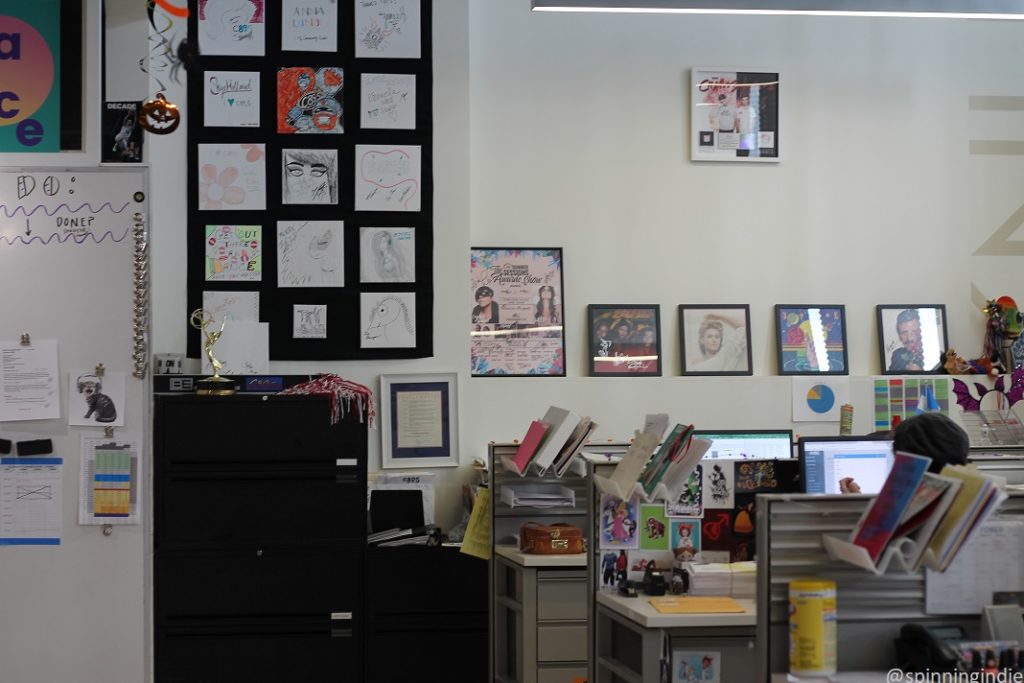 When I stopped by, morning drive host Drew Bailey was on the air and was joined by a student in the studio. A station veteran, he began at KNHC as a student at age 16, making this his 24th year on the air. The sole paid DJ, he’s on the air every day from 6am to 10am and used to volunteer as a Saturday night show host for 14 years. 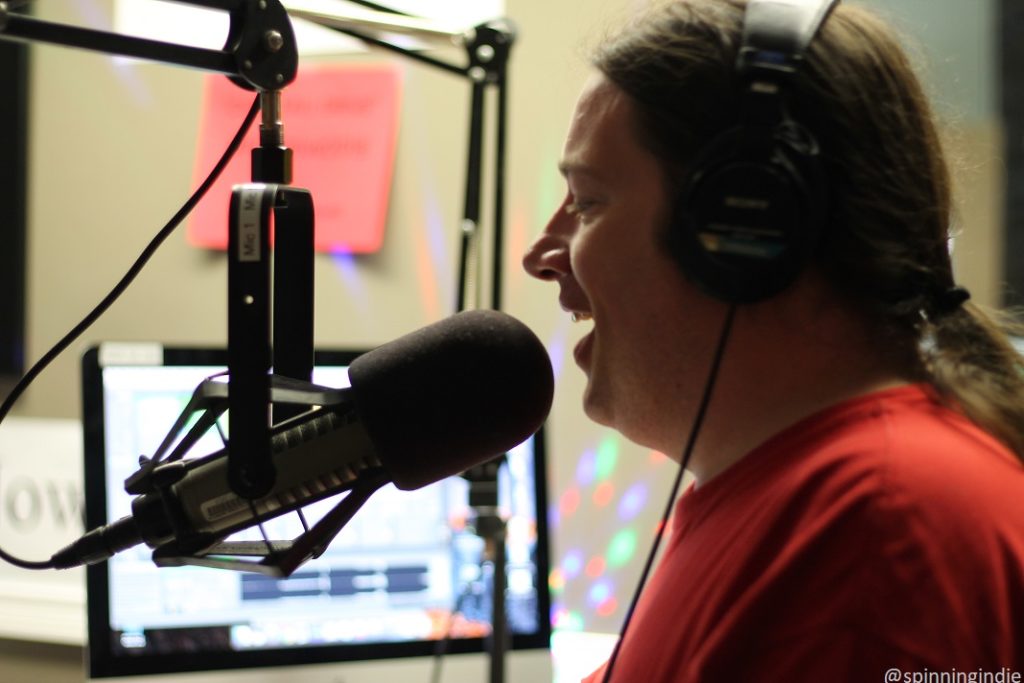 Although students pop in and out of the station throughout the school day (including before and after school and during lunch), they were largely absent from the station during my visit, owing to Nathan Hale High School’s complicated bell schedule, which is different every day. General Manager June Fox explained that students are adaptable and “they just plug in [to the station’s schedule] when they’re here.” 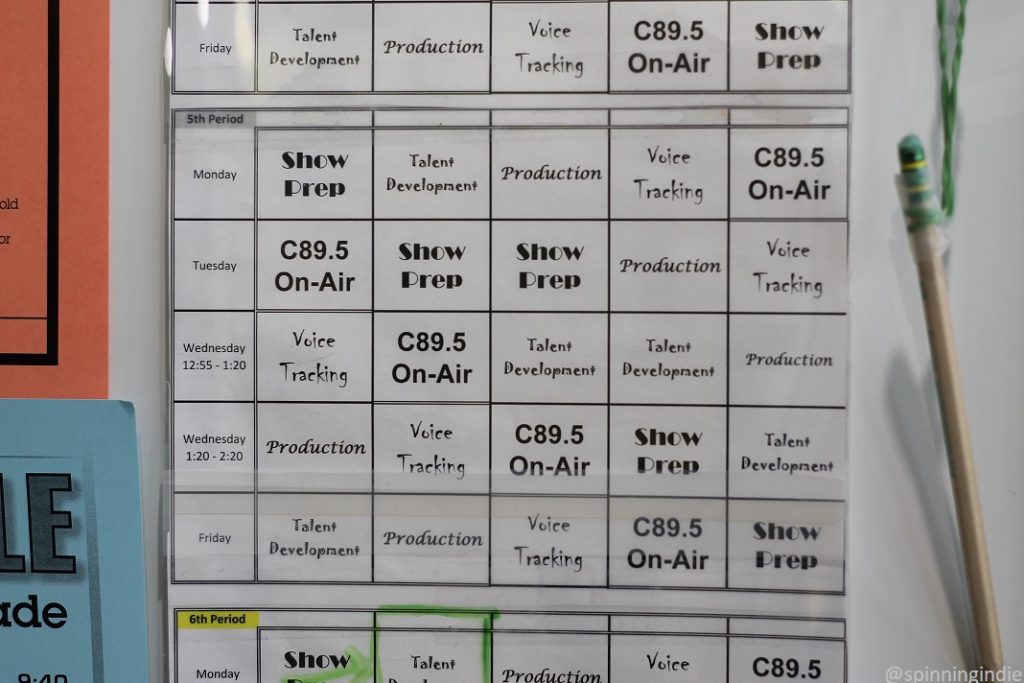 To get on the air students either have to pass the semester-long “Introduction to Electronic Media” class or an intensive 5-week summer radio class. For students, the work at the station is all hands-on, with “something different every day,” according to Fox. Students not only work with experienced DJs during live shifts, but they also do voice tracking and production work behind the scenes. Music is mostly played from a hard drive and I didn’t see a physical music library during my visit. 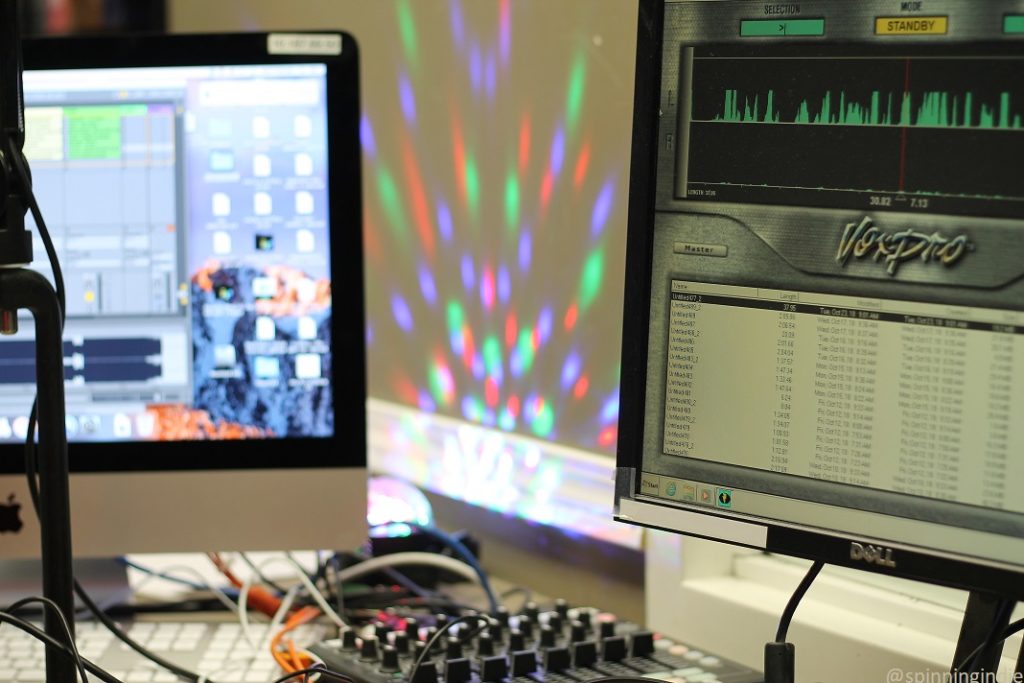 Fox has been with C89.5 since August, 2015 after stints at a wide range of radio stations, including public radio, high school radio, commercial radio, and college radio. 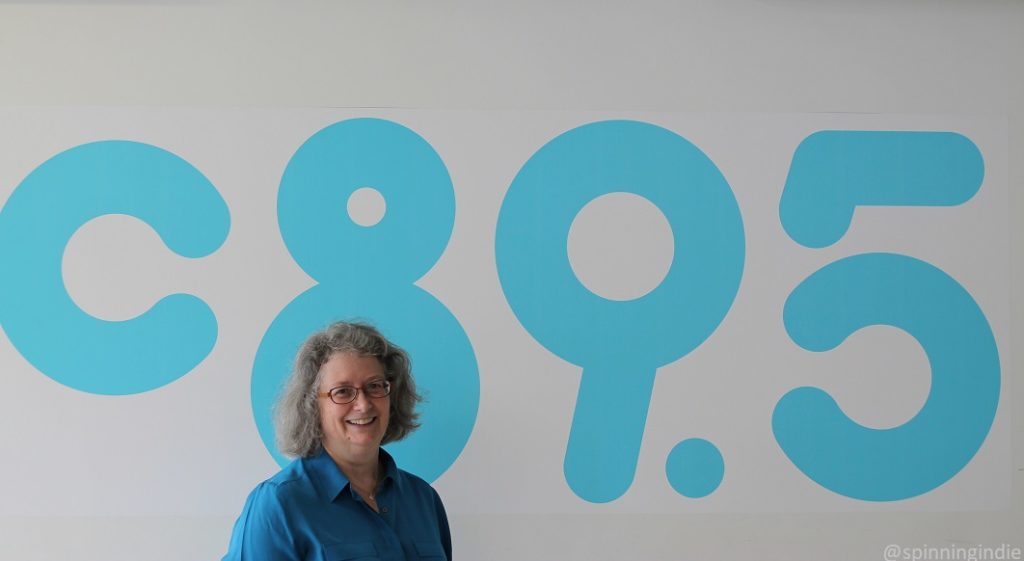 Since it was mid-pledge drive at the station, I enjoyed checking out the latest station swag (including customized Lego figures and rainbow socks) as well as the closet full of prior promotional items. Packed with CDs, stickers, buttons, fabric flying discs, music-loaded USBs, temporary tattoos, and more; the station branding emphasizes positivity and inclusivity, with rainbow motifs and purple and pink hues on many of the materials. 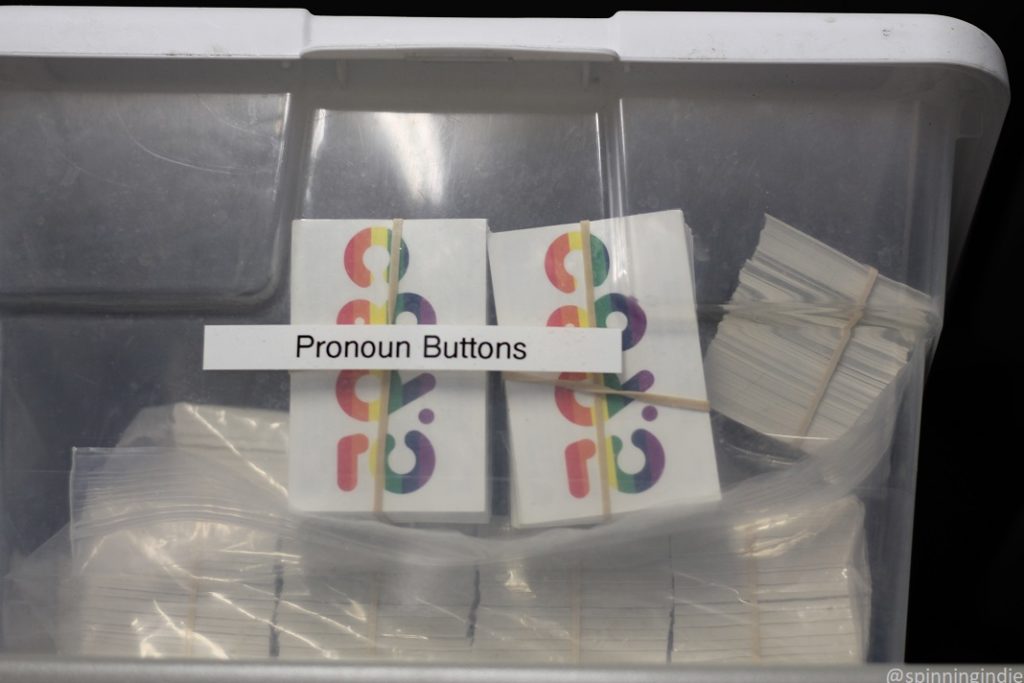 A sign on the wall reminds participants that the station is a safe space for all and C89.5 regularly participates in LGBTQ pride festivities. Fox shared that during Seattle Pride, station members affixed six thousand C89.5 temporary tattoos on attendees, remarking, “It was so much fun!” 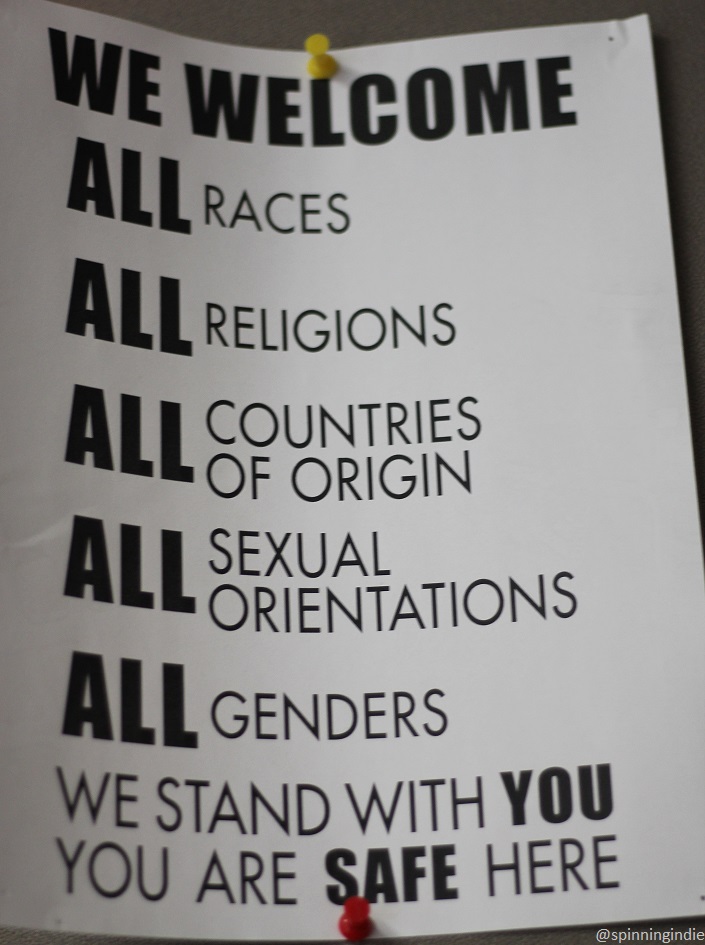 “We Welcome ALL” sign at KNHC. Photo: J. Waits 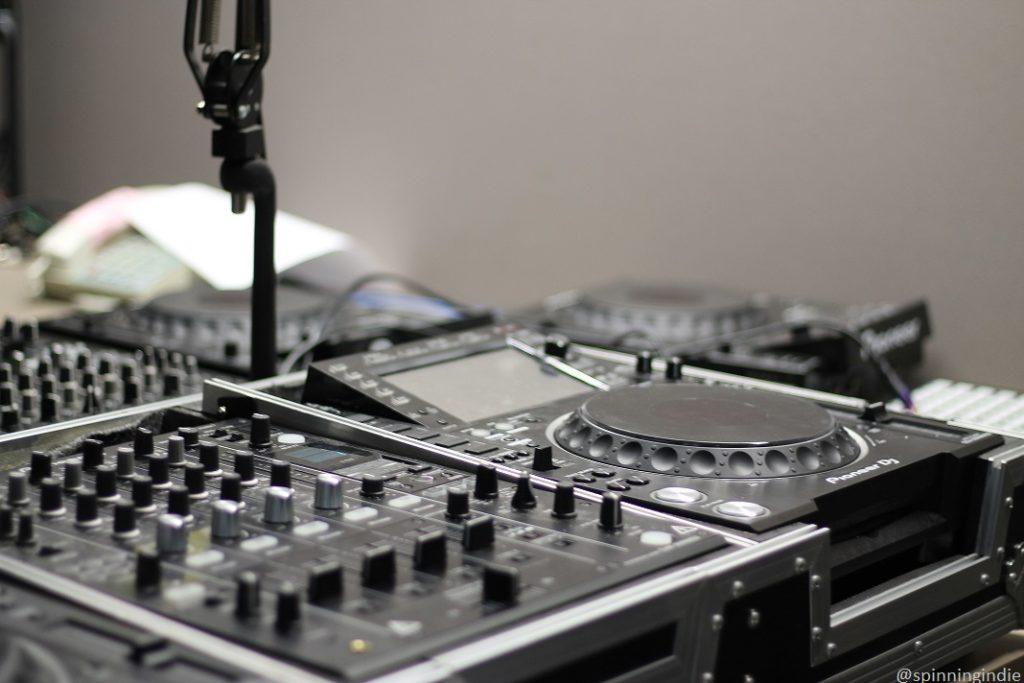 Additionally, Thursday mornings are devoted to 1980s new wave music. In the evenings, different resident DJs spin during the station’s “The Drive at 5” mix show. 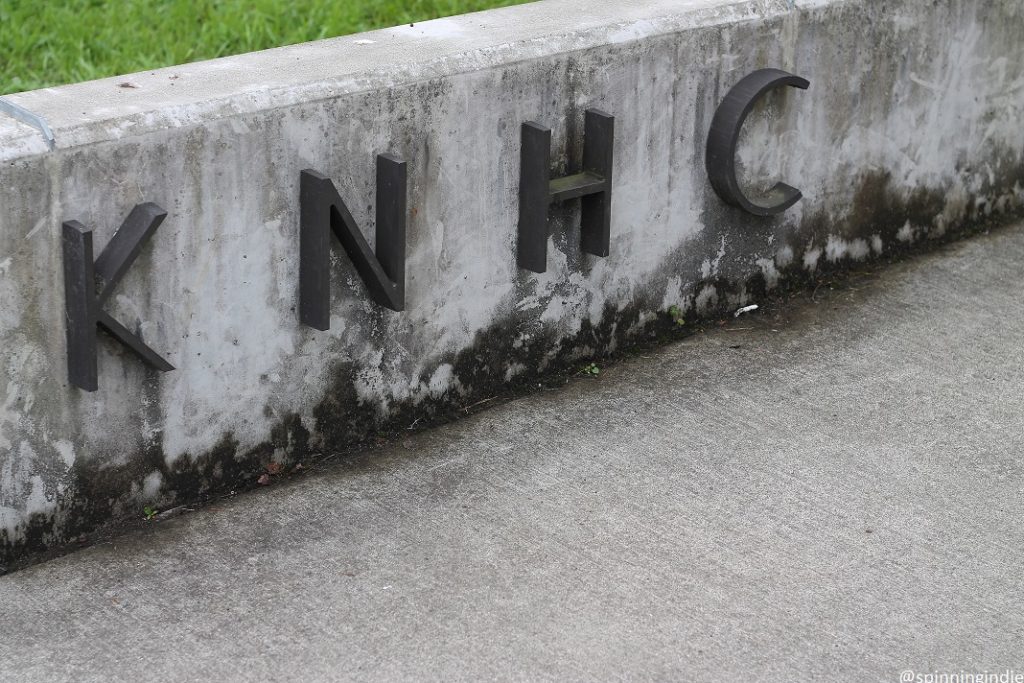 Conveniently located next to a small parking lot by an athletic field, C89.5’s digs (which it’s inhabited since 2009) include a large open space, with cubicles for the professional staff on one side and five production studios on the other. The on-air studio faces into the main room on one side and borders a live music studio on the other. Performances recorded in this room are archived on the station’s website as “live exclusives.” 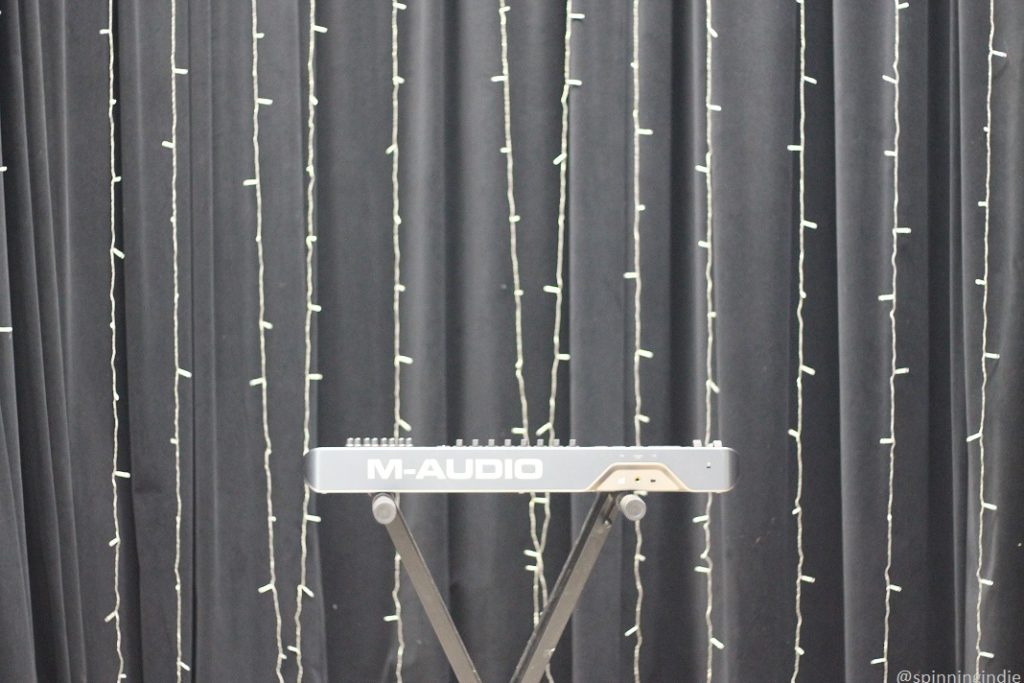 One of the production studios (studio A) has a large window facing a main hallway in the school, with a quintessential high school view of lockers. Fox told me that this studio was the original on-air studio, but the window to the school proved to be too much of a distraction for students, as classmates would greet DJs by banging on the glass. 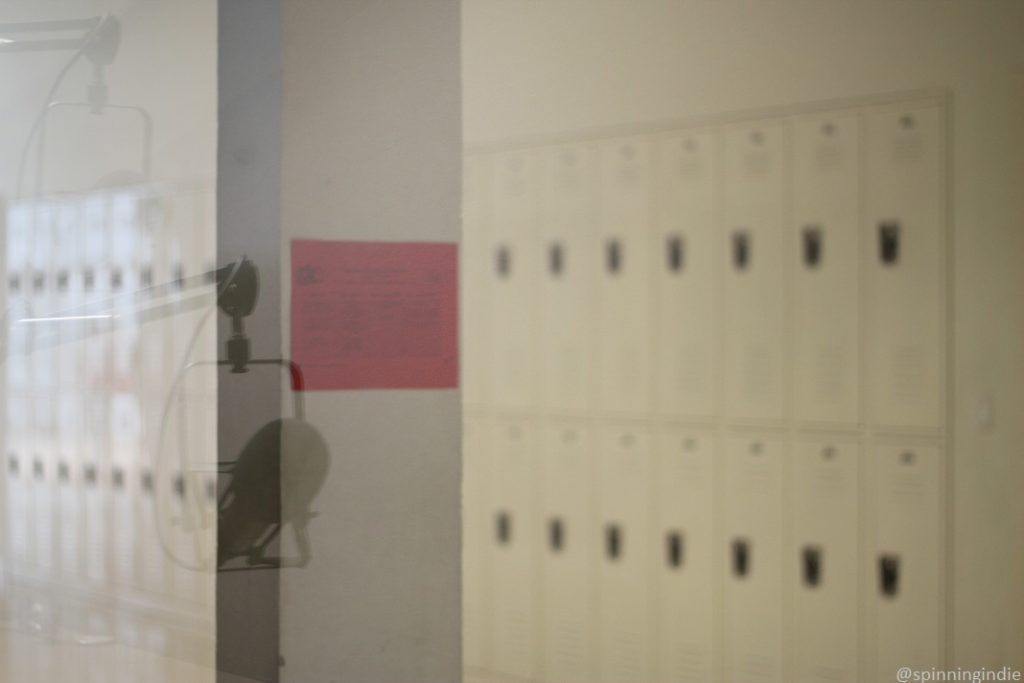 A nearby doorway leads into the school and there’s a classroom (not exclusively for radio classes) adjacent to that. During my visit, Fox and I quietly passed through a “dry art” class in that room in order to visit the promotions closet. 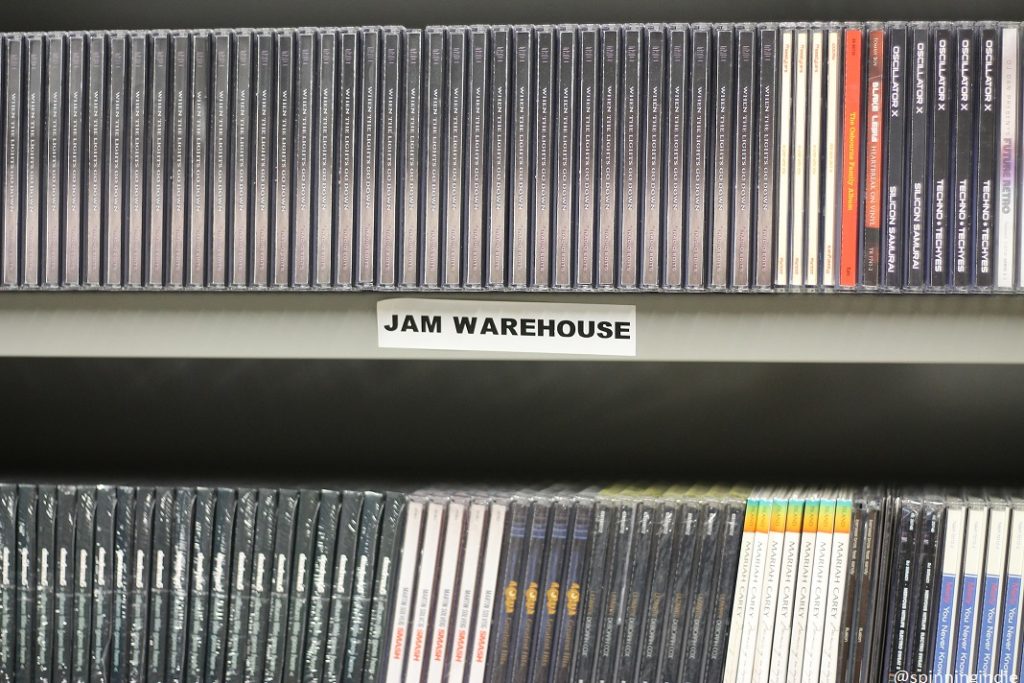 Signed artist photos, posters and framed gold records appear throughout the station, including a photo of Lady Gaga with the inscription, “C89.5! Thank you for spinning my record, babe” and signed by Lady Gaga. Fox told me that C89.5 was the first station in the country to play Lady Gaga, even inviting her to perform at the station’s listener appreciation party at the high school in 2008. 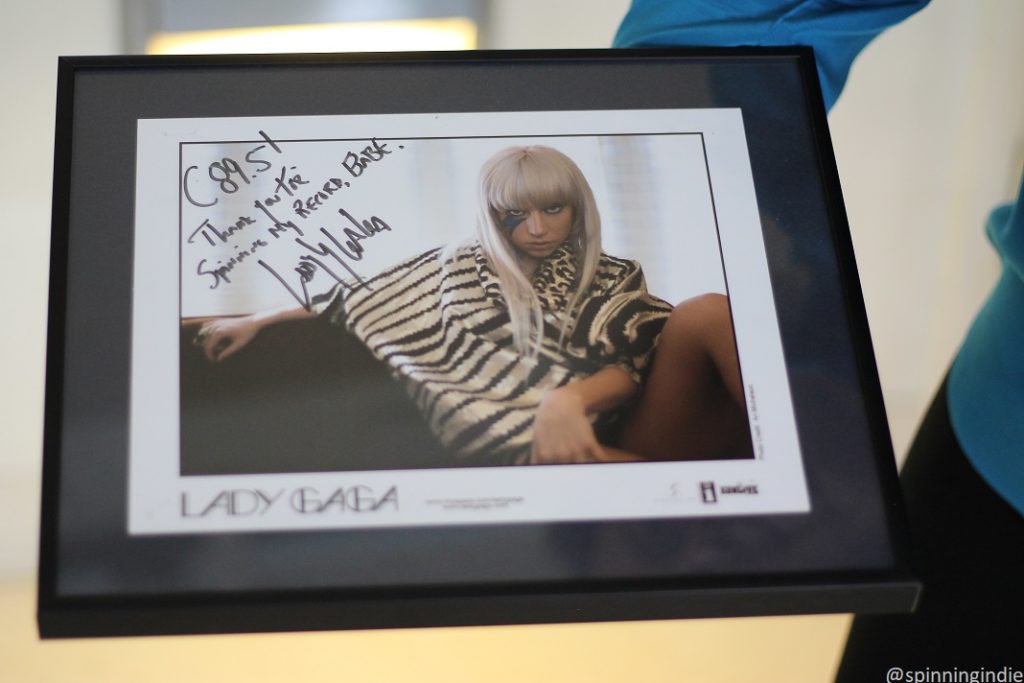 I was especially charmed by a collection of artwork on the station’s wall and learned that the small canvases were decorated by musicians who’ve stopped by C89.5. Artists are asked to pick up sharpies and create a special drawing for the station. Pieces vary from simple signatures (sometimes with a mounted CD) to colorful abstract designs to stunning line drawings. It’s a crafty way to pay tribute to the musicians that pass through the station. 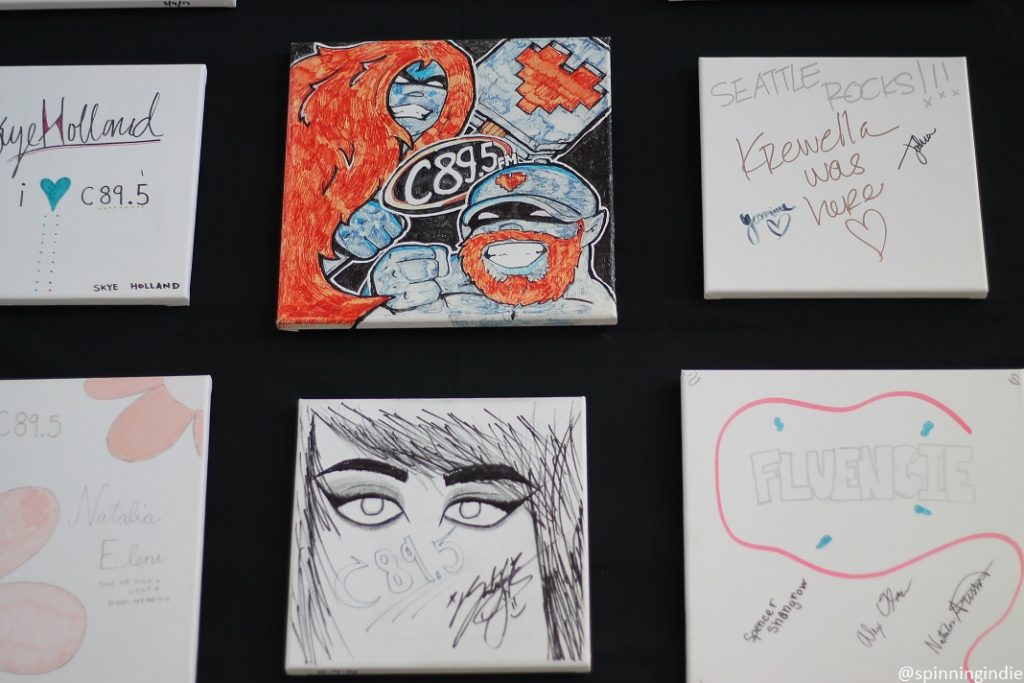 Drawings by artists who have visited KNHC. Photo: J. Waits

A veteran station, KNHC launched over FM nearly 50 years ago in 1971. Well-regarded in dance music circles, it’s received both local and national accolades. On its website, KNHC reports, “In 2003, The Village Voice recognized KNHC as ‘Best of New York’ high school radio stations thanks to its internet streaming, and the next year became the first non-commercial station in the United States to join the Billboard Magazine Dance Radio Airplay panel.” 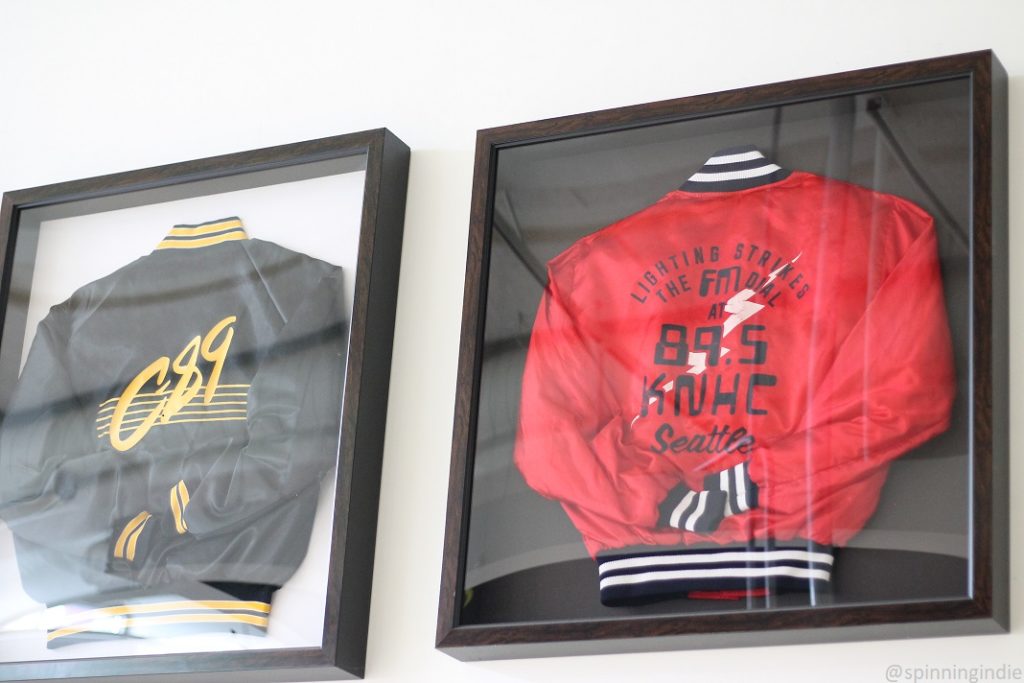 Thanks so much to June Fox for the wonderful time at C89.5! This is my 152nd radio station tour and my 9th visit to a high school radio station. You can hear more from the tour on Radio Survivor podcast #177. All of my station visits are cataloged in numerical order and by station type in my tour archives. Stay tuned for more reports from my October, 2018 Seattle travels.