By Paul Riismandel on May 4, 2017 in Art, Fun Stuff, History, Podcasting

For 40 years Mark Talbot hosted his UK-based radio show “Second Side Up.” On cassette. Only on cassette.

At its peak the show had 40 listeners, but duplicating that many tapes became too big of a financial drain on the DJ, so he scaled back.

I learned about “Second Side Up” from the Australian podcast “This Is About,” presented by producer David Waters, who discovered the show when Talbot listed the tapes for sale online. He contacted the cassette DJ to learn this utterly captivating, and very human, story. Waters also produced a slightly longer audio documentary for BBC Radio 3.

Anyone who grew up with a cassette recorder can probably relate to playing DJ alone or with friends. I actually would share tapes with my best friend in grade school, who seemed to enjoy my goofy attempts at sixth-grade humor, intermixed with songs or bits from comedy records. But a listener of one was about as far as it got.

Tapes have also been used as audio letters over the years, with the sound of one’s voice lending a type of intimacy absent from the written page. I’m sure songs and other audio bits have been included, too. However, as form of correspondence, I doubt many audio letters had more than a couple of listeners, either.

“Second Side Up” isn’t too far away from these. Talbot’s longest-standing listener was his mom, to whom he would dedicate songs or fill in details on his life.

In 2017 “Second Side Up” sounds a lot like a podcast or hobby internet radio show. Only it started in 1974, 30 years before podcasting, 19 years before internet radio, and even a good 8 years before Howard Stern took his uniquely confessional and self-conscious style of DJing to the New York airwaves on WNBC-AM.

“Second Side Up” is certainly unique in the length of its run as an ultra-DIY cassette-distributed radio show. Yet, the idea of a distributing radio shows on cassette isn’t that unusual, even if the form faded in the internet era.

Slack in your Tape and on the Air

“The Hour of Slack” is the show that comes most readily to mind. Produced by the Church of the Subgenius, this long-running program of audio collage and dadaist sermon-like rants was distributed on cassette to college and community stations beginning back in 1985. Stations paid a small fee to have the show mailed each week, and any listener or fan was free to order their own copy of any episode.

In fact, although the show is available as a podcast now, Subgeniuses can still get a mail subscription to “The Hour of Slack” on CD. While it is actually broadcast terrestrially, one can make a strong argument that cassette (and now CD) was a significant distribution channel.

Working in community radio in the 1990s I recall many other syndicated programs arriving in the mail via cassette, like “Radio Nation” (from The Nation magazine), FAIR’s “Counterspin,” and “Making Contact.” Occasionally sorting the mail I also spotted unsolicited tapes, usually from evangelical Christian producers or the military, which often ended up in the hands of late-night freeform collagists.

Christian programs were widely distributed on cassette, whether they were intended for broadcast or just home listening. Focus on the Family’s radio drama “Adventures in Odyssey,” is one well-known example. 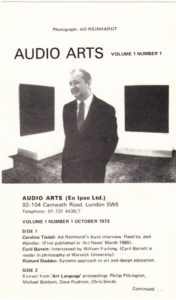 More akin to “Second Side Up” is audio mail art, in which artists mailed tapes to other artists or listeners. Often simply referred to under the umbrella term “cassette culture,” these tapes might have been distributed singly, or in greater numbers. The content could vary wildly, from straightforward home-recorded songs and musique concrète to spoken word and programs that resemble more traditional radio shows in format.

Beginning in 1973, “Audio Arts” was a British contemporary art “sound magazine” that lasted nearly as long as “Second Side Up,” wrapping up in 2006, after 33 years in production. Early editions featured contributions from Noam Chomsky, Margaret Henry and W.B. Yeats, while latter releases included artists like Chuck Close, Dorothy Cross, Wim Wenders and Vanessa Beecroft. All 24 volumes are digitized and archived online by the Tate museum.

The New York City based “Tellus Audio Cassette Magazine” exposed listeners to avant garde music, sound art and spoken word. It ran from 1983–1993, and the archives are available at Ubuweb.

The Ferric Form(alism) of Radio

Though both self-consciously adopted the moniker “magazine,” neither “Audio Arts” nor “Tellus” embraced the formalisms of radio, like back announcing, or really announcing anything at all. Probably with a degree confidence, the producers apparently assumed the curious listener could just read the insert, since there was no assumption that the programs would actually be broadcast. However, things might be less certain for the listener who acquired a dub unaccompanied by a copy of the insert.

It’s that very formalism of radio announcing that makes the “Second Side Up” story so singular and compelling. As the first practical and widely-available home sound recording medium, in hindsight it’s inevitable that the cassette would be used to distribute editorially curated sound collections, from the mix tape to these more original works. So it’s even a little surprising that there aren’t more strict radio shows distributed on tape—at least ones that are well-known or easily discovered.

Finishing out this survey, I have to point out the deep irony contained in the so-called “podcast patent,” which was used to extort royalty payments from prominent podcasters just a few years ago. That patent, filed in 1996 before the advent of the mp3 file, was actually for a cassette-based audio magazine program that would be distributed by mail as a serial subscription. That’s right: one patent troll claimed that podcasting started out back in the mid–90s, on cassette.

Even in this broader context, Mark Talbot’s 40-year run as a super-niche cassette DJ is both fascinating and admirable. Such dedication to narrow-casting puts all but the most tenacious underground tape labels to shame.

At the end of the “This Is About” episode, presenter Jordan Raskopoulos suggests that maybe someone should “digitize and podcast all that stuff.” Yes, please.